Currency is one of those ever-present objects in our lives, something that passes through our hands every day. So mundane that we don’t really notice what it looks like each time we see it.

But the design of our bills is ever-shifting, continuously updated for contemporary aesthetics. And when those changes happen, that’s when we take notice. A great example is last year, when Norway called for proposals to redesign their banknotes. They ended up with an abstracted coastal view of the country designed by Snøhetta Design, which has been touted by various design media as one of, if not the, best design circulating right now: 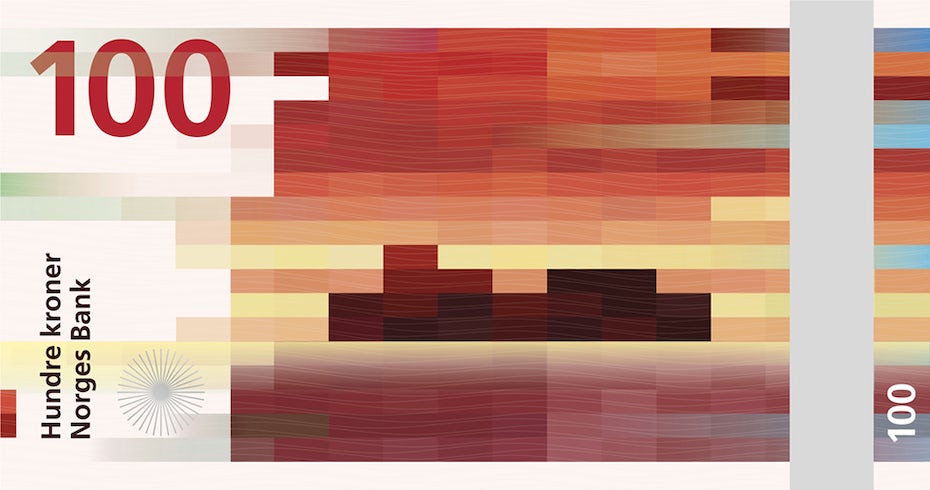 Currency design has also come up lately in popular culture as an issue in the U.S., with more and more people looking to see a woman or a person of color replacing the bills dominated by white men, mostly former presidents. The common suggestion is to replace Andrew Jackson on the $20, particularly considering the centennial of the women’s suffrage movement coming up in a few years.

All of this chatter drove us to look through some of the best designed currencies floating around — both those still in print, and those who have vanished into antiquity, and the hands of private collectors. Each country manages to find a way to imbue their currency with a sense of culture and history, each in their own fascinating way:

Aruban artist Evelino Fingal created this colorful line of banknotes in 1990, combining the country’s unique natural flora with the patterns of pre-Columbian pottery.

Australia was the first country to utilize a plastic polymer note, beginning in 1988 marking the country’s 200th anniversary. The designs featured famous cultural figures of the country, including Aboriginal writer David Unaipon as pictured above.

Bermuda redesigned their currency to debut in 2009, as a celebration of their 400th anniversary — the first redesign since the launch of their dollar. The International Banknote Society awarded The Bermuda Monetary Authority for their work, specifically on the $2 note. 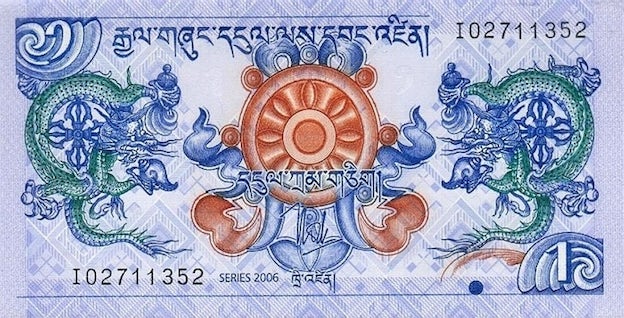 2006 is the latest in Bhutan’s series of notes, a bit younger currency than many others around today having started circulation in 1974. The image on the front of this bill is the government’s crest surrounded by dragons — a whimsically swirled aesthetic against the sharp lines of the background patterning. 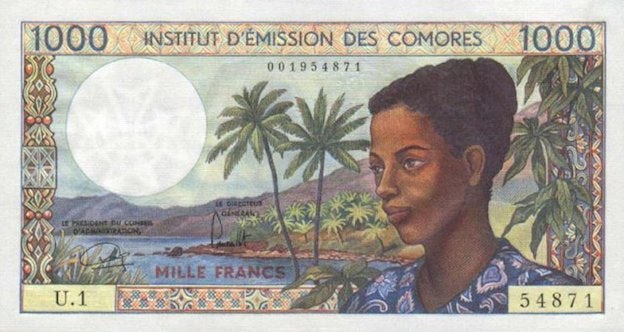 The first Comorian Paper money was printed in 1920, an emergency issue of Madagascar’s postage stamps fixed to a card that allowed them to be used as currency. The designs you still see today originated in the 1970s, with periodic tweaks to the design to add additional security measures.

The Cook Islands pretty much dominate when it comes to natural imagery. How can you lose with a mermaid riding on top of a shark? This particular image comes from the 1987 banknote, the first series introduced and replaced shortly in 1992. 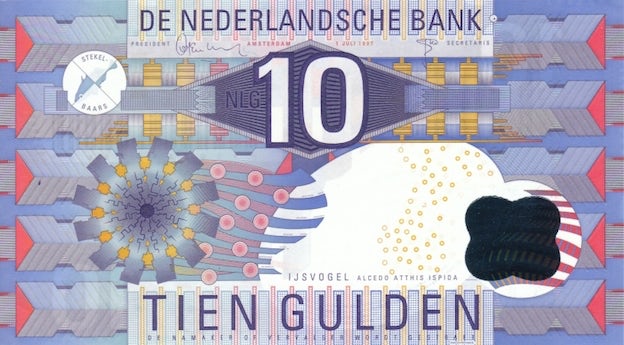 While almost every note we see depicts the image of a country’s leader, historical figure, or a cultural or geographic signifier, it’s the differentiation in geometry, pattern, and color that really attracts our attention. That’s how it is with the Dutch Guilder, which on the reverse depicts this classic imagery, but on the obverse depicts a wonderfully symbolic abstraction of geometric shapes.

Couldn’t resist putting a denomination featuring a huge insect in our collection! The currently circulating set were designed in a series over a span of years, featuring all sorts of endemic flora and fauna. But our favorite is the Beli (Lever’s Goby), the winged flier decorating the $100 bill released in 2007.

Hong Kong Dollars are some of the most colorfully fun to get your hands on (fuchsia + cerulean? Yes please.) They do feature cultural and historical references, but in a layout geometrical and abstract enough to differentiate them from many other contemporary currencies.

It’s hard to escape good design in Scandinavia, even on currency. In the traditional style, historical figures are featured and against the backdrop of folk patterns. But the whole image still manages to be laid out and colored in a way to feel like a very contemporary note. 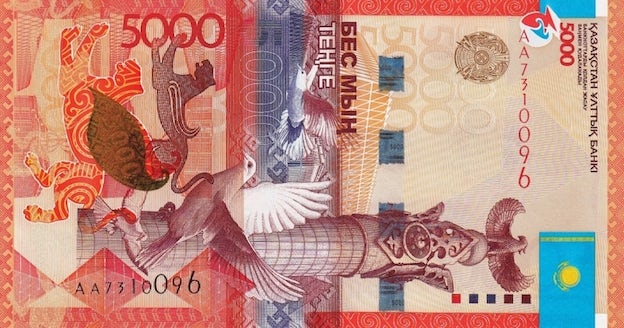 The current designs issued by the National Bank of Kazakhstan came around in 2006, with one side displaying vertically and the other horizontally as well as having text in both Kazakh and Russian. The obverse of each note depicts the same collection of cultural images in different colors, while the reverses focus on different sets of architecture and geography. 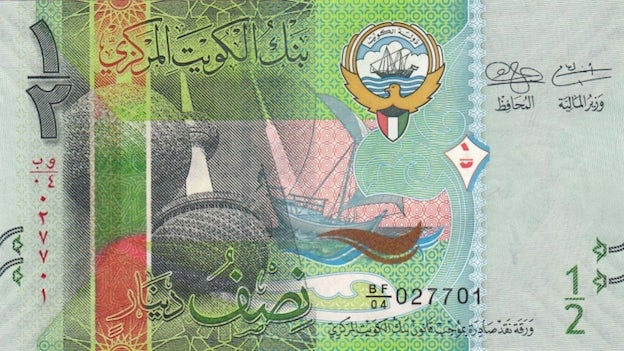 Currently on it’s sixth series debuting in 2014, the Kuwaiti Dinar feature collages of historical and contemporary cultural references, quite often including the traditional dhow boat.

The illustration for The Maldive’s currency were designed by Maizan Hassan Manik and Abbas. Paired with a palm tree, the boat is a Mas Odi, an old-style fishing vessel.

Mongolia’s design borrowed much of their color scheme and overall design from the Soviet Ruble during the days of the People’s Republic. The famed Ghengis Khan now stands on the high-denomination notes, including the 20,000 pictured above. 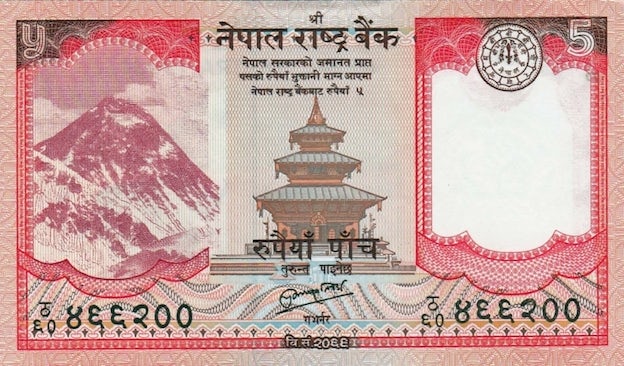 In 2007 (and in a revised version in 2012), Nepal began to issue currency in which the traditional leader’s portrait was replaced by Mount Everest. This is a mirror of the political change from Kingdom to Republic, which happened in 2008.

1992 was the year that New Zealand’s latest design was rolled out, each depicting a famous New Zealander — with perhaps the most famous of all, Sir Edmund Hillary of Mt. Everest fame, on the $5 depicted above. 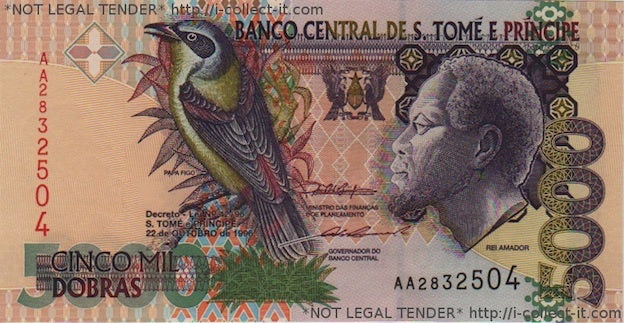 As a centerpiece to the intricate design of native fauna and geometric patterns, the notes depict Rei Amador — King Amador: a historical leader said to have led a famous slave revolt on the islands in the 1500 and a symbol of freedom for the country.

This last edition of Suriname’s Gulden were created in 2000 to reflect native flowers and birds. Despite the beauty of these notes, they were short-lived. The Surinamese Dollar replaced the Gulden in 2004. 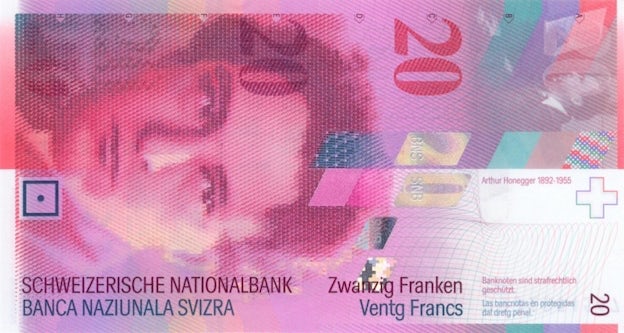 Switzerland is currently on their ninth series of banknotes, released in 2005. The designer, Manuela Pfrunder, was actually the second-prize winner of the competition held to design this newest round. Her design was selected, then largely modified for the final note, when the initial winner’s designs met with too much public resistance.

What does your country’s currency look like? Show us in the comments!

You're in!
You proved us right again. Our newsletter is only for the coolest kids. And you’re one of ‘em. Get ready for amazing stuff in your inbox.
Join the community

Designers, check out these contests so you can start building your career.

Get a design
Designers, see opportunities
0%

design by Terbitbasuki
Want design tips & business trends (and the occasional promotion) in your inbox?
Subscribers to our newsletter have been scientifically proven to be smarter, better looking and at least 50% more awesome than average.