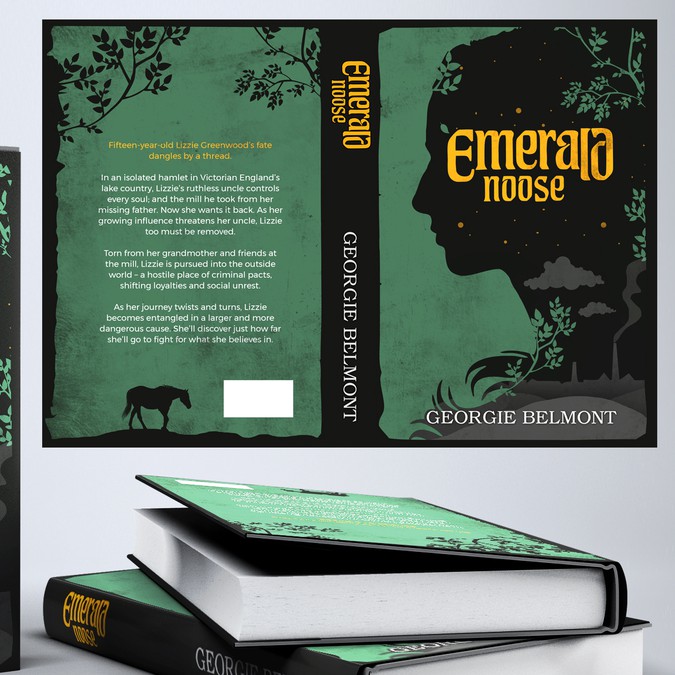 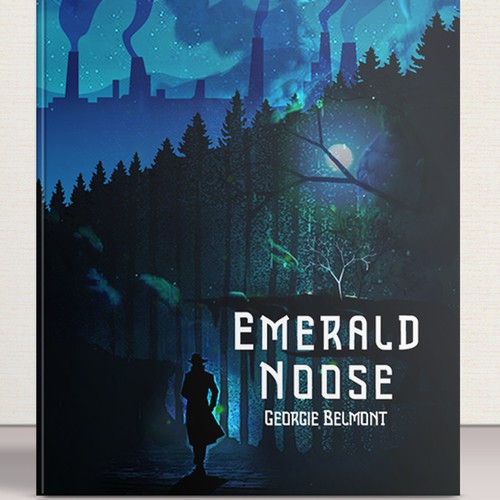 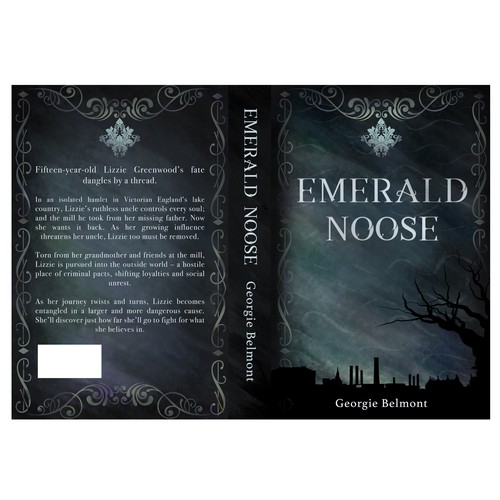 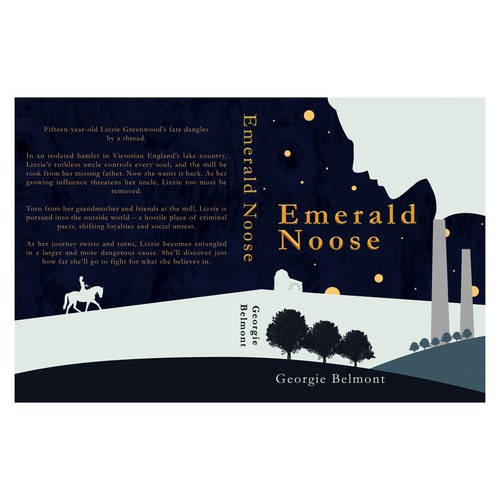 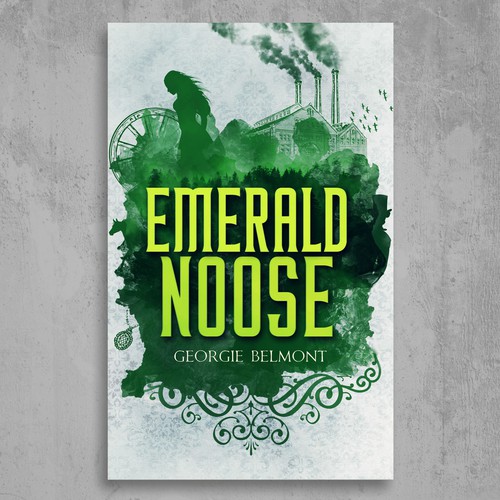 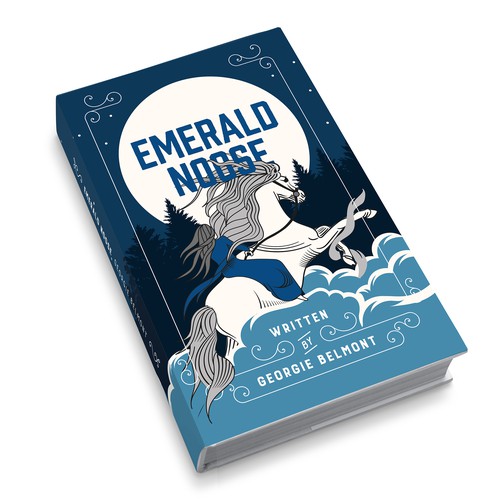 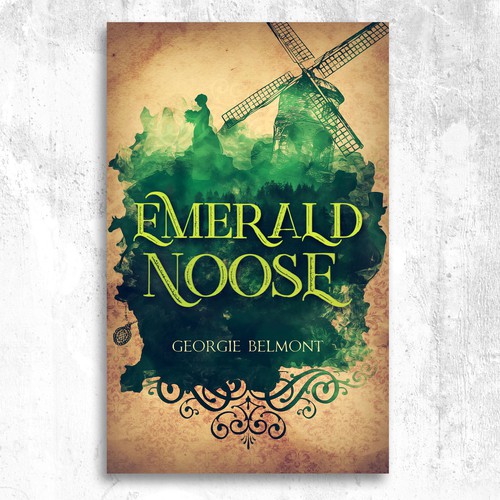 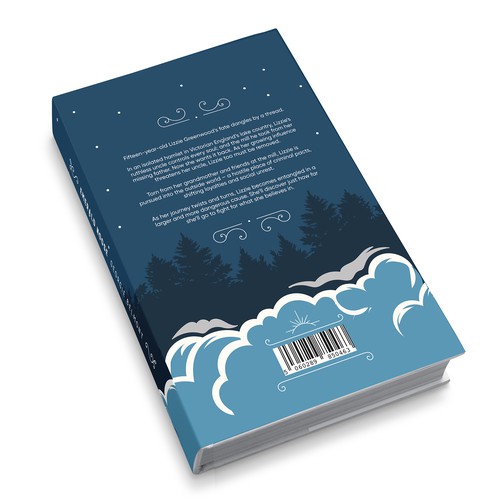 Emerald Noose is an historical action-adventure YA / adult novel, with social-political themes.

The story describes how Lizzie Greenwood escapes her uncle – who wants to lock her up in a lunatic asylum to get her out of his way – only to be tricked by a gang of highwaymen. They want her to help them kidnap a girl.

By the end, she’s become trapped by her own choices and bad luck – she is an accessory to the kidnap and two murders. Although her entire journey has been focused on returning home to reclaim her rightful inheritance (a mill), she realises she can’t yet return. First, she must save the kidnapped girl.

Please see the other 6 reference designs, below.

I prefer illustrative designs, and those which suggest complexity and don’t give too much away about how the story unfolds. I prefer bold colours.

Please see the 6 reference designs and likes / dislikes, below. Although these reference designs are mostly black and gold, I don’t have a particular preference for these colours. It’s just that most book covers in bookshops seem to be black.

The image must work at thumbnail size, with the title clearly readable at this size. I also notice that a lot of covers for historical novels use a font with serifs.

The general tone of the story is earnest, with frequent (often grim) humour and creative imagery. This is an adventure story first and foremost, but one that arises out of the particular circumstances of a time and place.

The story is set in late 1830s northern England: a small village in the Lake District (forests, mountains, moors, lakes); a camp of outlaws (in a forest, mostly at night, eerie mist); the industrial city of Manchester (factories, chimneys, smog).

The protagonist, Lizzie, interacts with the story settings very physically and sensually. She feels capable and confident in wild, natural settings, and out of her depth in the city.

The noose of the title is NOT a literal object. It refers to three main things:
1. Family ties
2. An emerald necklace – which appears, casually, in the middle of the story; and then at the end, when it is given to Lizzie by the boy who has murdered two men to protect her, and who wants to keep a bond between them, though she has chosen to go a separate way.
3. Throughout the story Lizzie is trying to escape various types of restraint, entrapment and physical death (even execution at one point).

There is also a potential linking image, which relates to the noose of the title: a horse. Lizzie compares herself to a horse as she flees her uncle across the moor. Later she rides a horse to the outlaws’ forest camp, feeling like she is ‘suspended in the mist, atop a horse of supernatural proportions, forever’. And in the final action sequence, she is trapped in a stampeding crowd by mounted soldiers. She describes these horses as wanting to do ‘what their nature demanded, they wanted to run’, which in a way could also describe her. She does a lot of running! But it is also what she can no longer do at the end: she can’t run from the consequences of her actions, even though there is still urgent business back home.

I am planning at least two more novels in the series.

Please avoid designs that are too busy, and anything cutesy (no cartoons) or girly. And avoid background colours that cannot be seen clearly against the white of a webpage.
Also, please don’t include photos or images of people with specific faces. De-personalised outlines or silhouettes are fine. Please avoid stock imagery.
No pictures of nooses or necklaces, unless they are very subtle, e.g. the suggestion of one incorporated into another image.
No pink.

I like how the border gives a feeling of movement – or maybe a mirage, perhaps things are not what they seem – and draws you in to examine the silhouette of what might be a palace, and why someone is riding past it, not to or from it. I like how the typography of the title suggests an exotic adventure. And that the title easy to read at thumbnail size.
I love the feeling of turmoil this image creates. I also like the bold contrast of the colour scheme (and the blue). With the gloomy title and the focus on the ship at the eye of the storm, it feels like there’s no hope for any of the characters, but it’s going to be a lot of fun to see them struggle against their fates.
I like how the image of a bird seems simple, but is created from the structure of a tree, suggesting complexity. I also like the tension between the title and image – the title suggests a wren will be hunted (and killed), while the image is of the wren about to take flight (and escape).
Again, I love the turmoil of this image. And the single figure striding purposefully towards the storm in the bleak mountains – he’s not afraid to confront danger, fear and uncertainty. I don’t like how the white of the bottom half disappears into the white of the webpage.
A more classic design for a historical novel, but I like it. The raven and Tower of London are very familiar images for anyone who knows about Tudor kings and queens. There isn’t anything surprising here; you know exactly what you’re getting – conspiracy, treachery, doomed characters. But the raven has a friendly face, and roses are growing in the border, so maybe there’s some hope too.
I like the movement in the textures of the sky and sea. Together with the red (which I like), it suggests something terrible is coming to the island. And yet, the darkness of the island suggests there are secrets and dangers there too. It’s going to be a battle between equally worthy opponents. I don’t like the title font.
Document containing the 6 reference designs and corresponding text, as above.