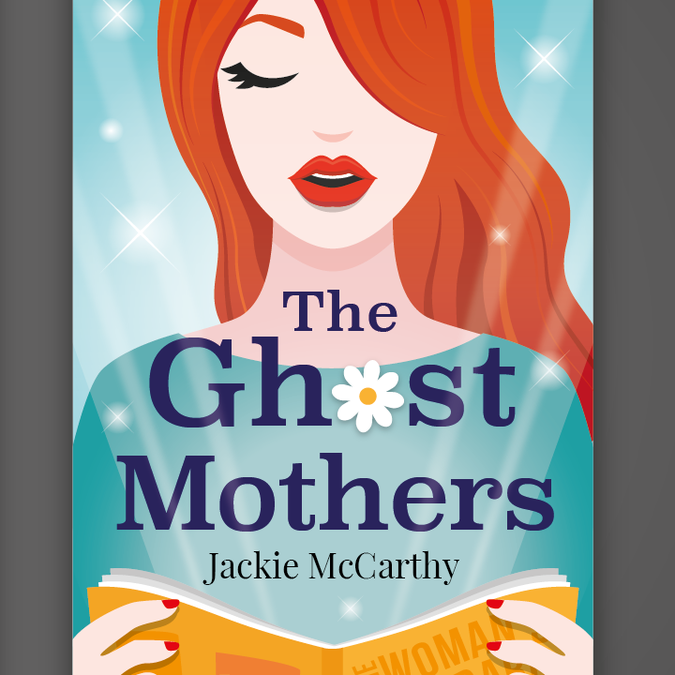 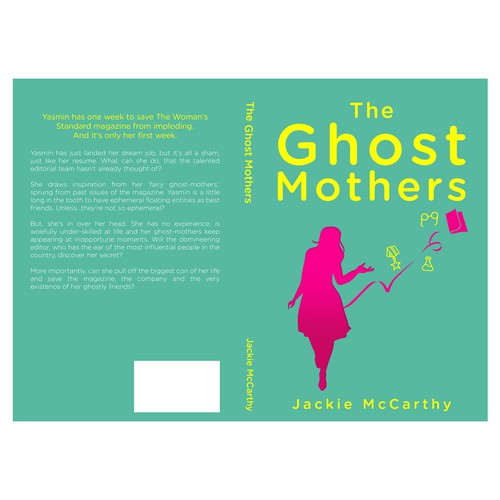 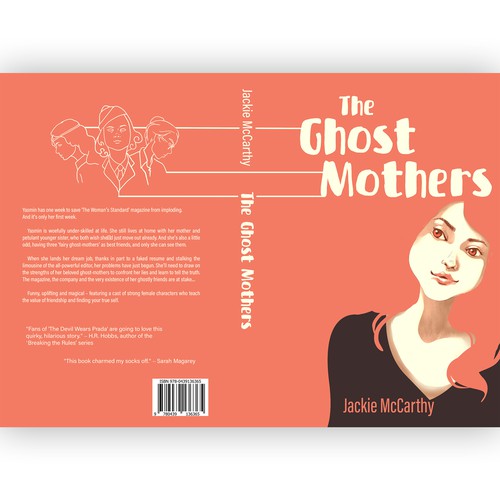 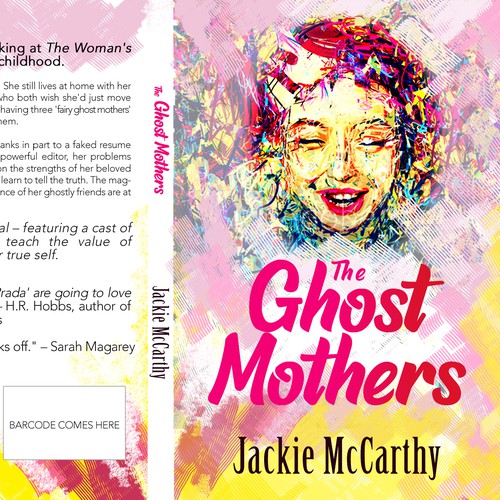 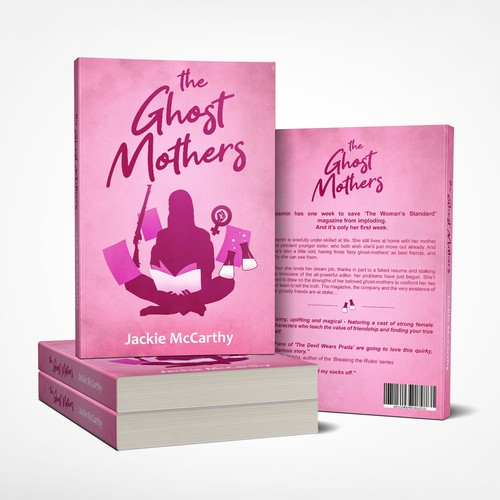 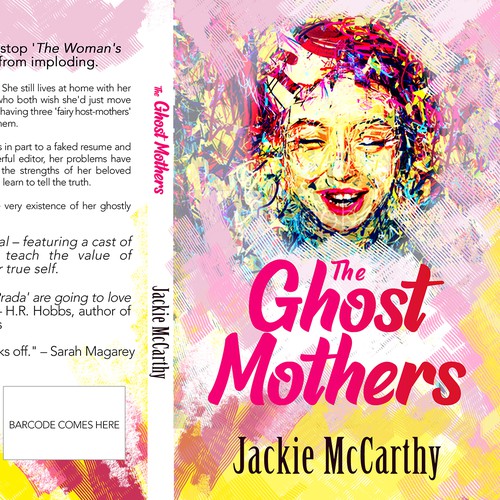 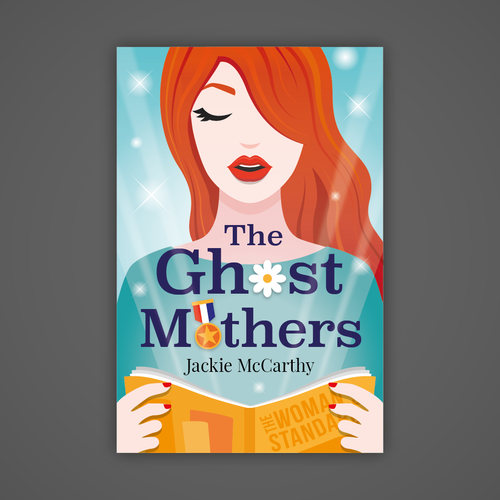 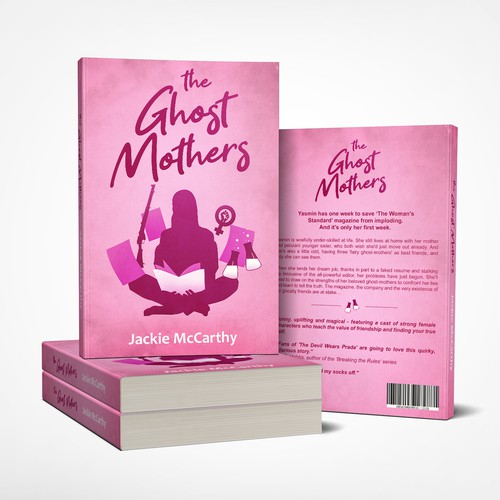 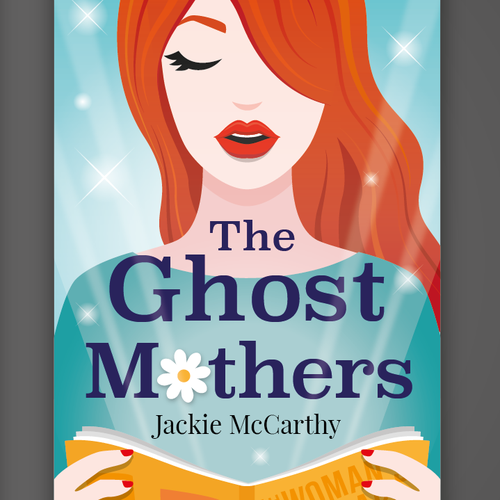 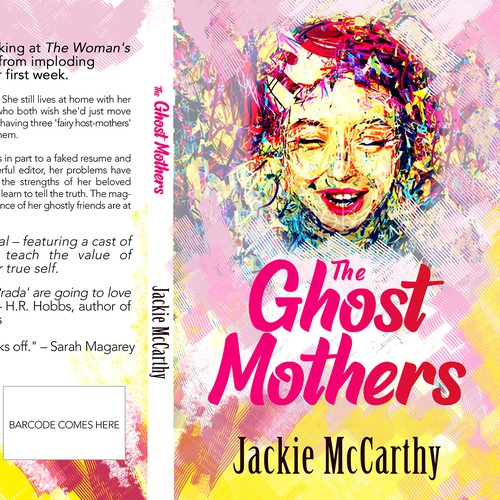 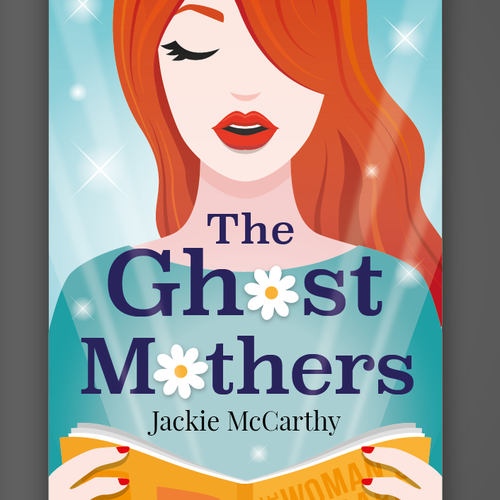 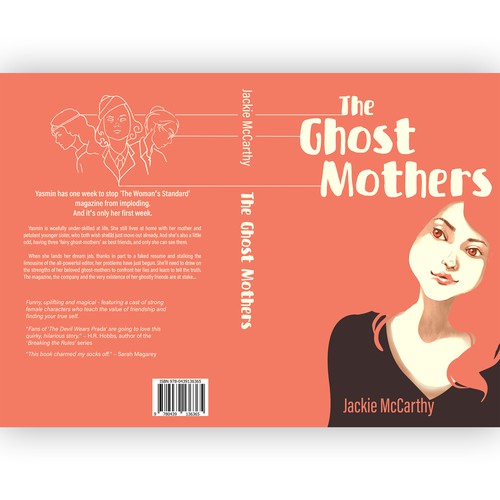 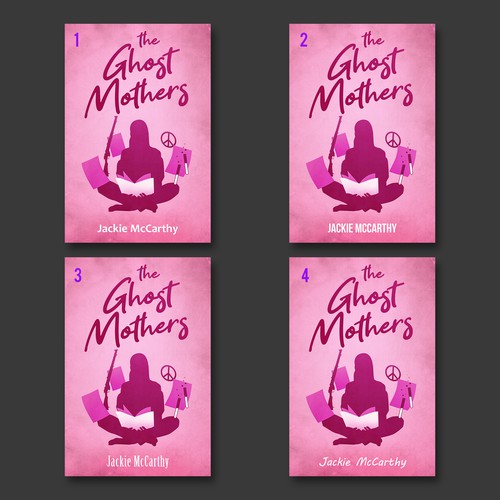 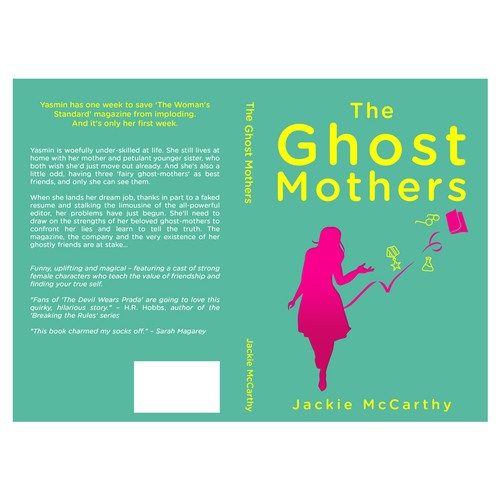 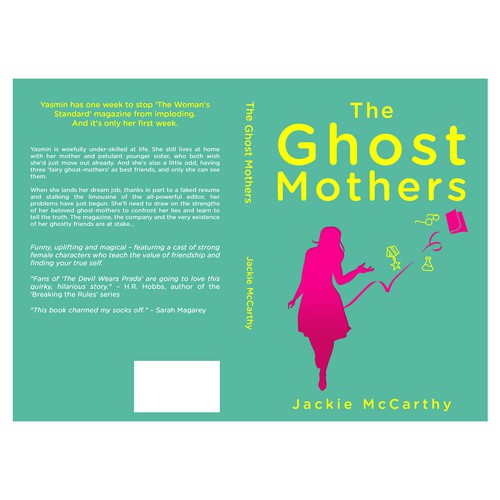 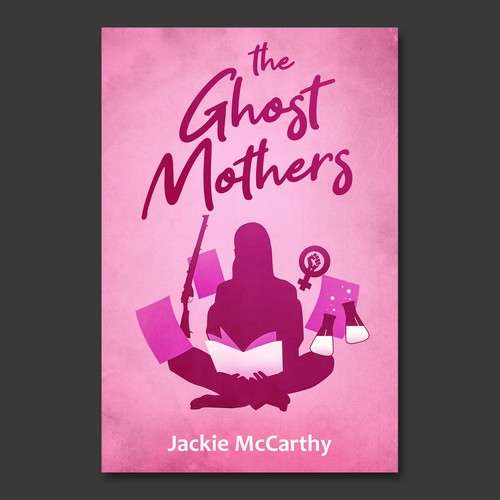 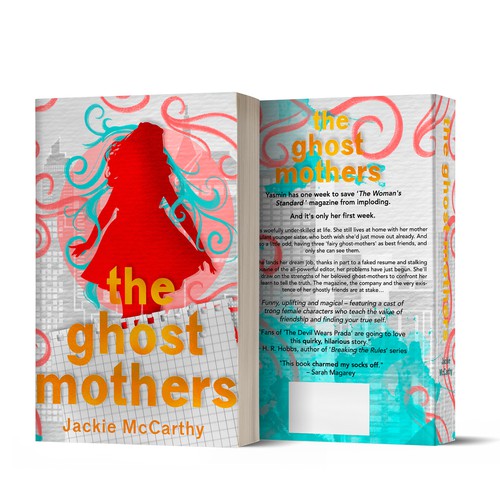 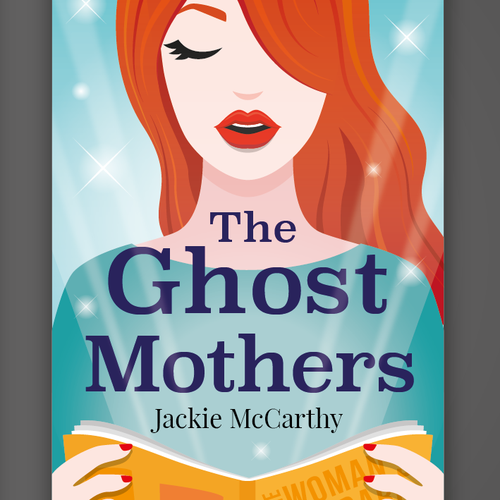 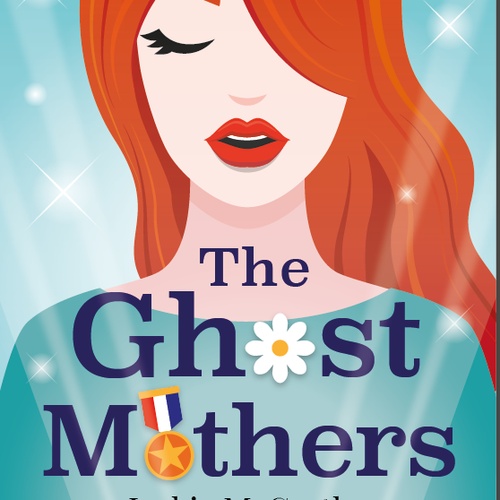 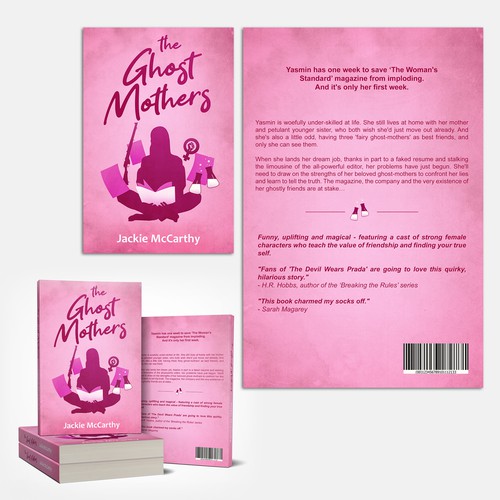 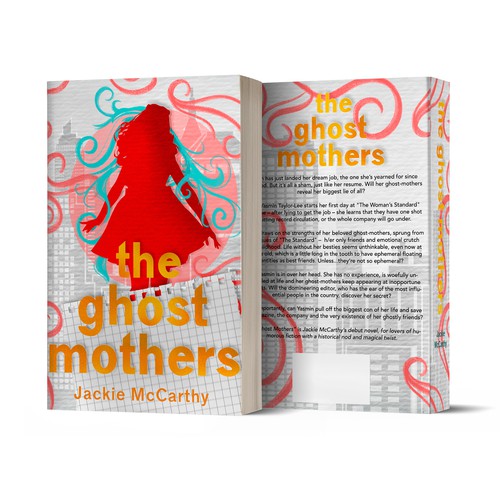 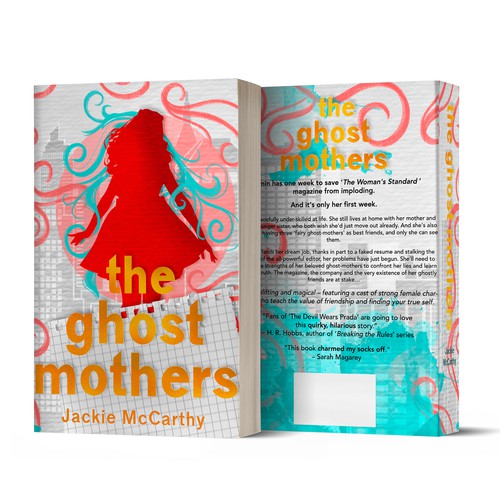 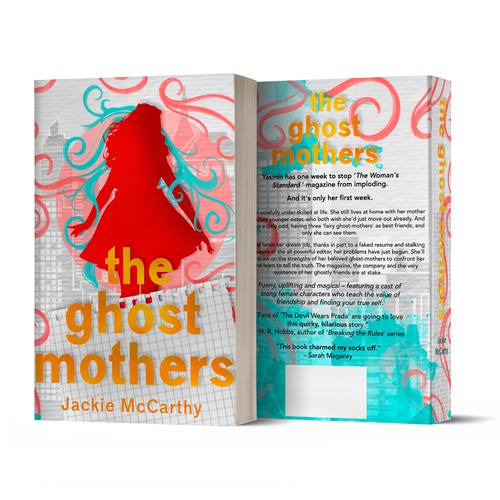 My debut novel, "The Ghost Mothers," became an Australian Amazon bestseller when the eBook launched. Now I am ready to launch the print version of the book, and would like a whole new redesign for the paperback cover. Please help me find a cover that would proudly sit on the shelves in a bookstore, next to traditionally-published books :)

Yasmin has just landed her dream job, the one she’s yearned for since childhood. But it’s all a sham, just like her resume. Will her ghost-mothers reveal her biggest lie of all?

When Yasmin Taylor-Lee starts her first day at "The Woman’s Standard" magazine – after lying to get the job - she learns that they have one shot at hitting record circulation, or the whole company will go under.

Yasmin draws on the strengths of her beloved ghost-mothers, sprung from past issues of "The Standard" - her only friends and emotional crutch since childhood. Life without her besties seems unthinkable, even now at 24 years old, which is a little long in the tooth to have ephemeral floating entities as best friends. Unless...they’re not so ephemeral?

But, Yasmin is in over her head. She has no experience, is woefully under-skilled at life and her ghost-mothers keep appearing at inopportune moments. Will the domineering editor, who has the ear of the most influential people in the country, discover her secret?

More importantly, can Yasmin pull off the biggest con of her life and save the magazine, the company and the very existence of her ghostly friends?

"The Ghost Mothers" is Jackie McCarthy’s debut novel, for lovers of humorous fiction with a historical nod and magical twist.

My ideal reader enjoys light-hearted, humorous stories containing magical elements, and strong female characters from different generations. The book is mainly aimed at females aged 18-24, and my main audience is located in the US, UK & Australia (but the book will be released worldwide). Please note the genre is light-hearted Magical Realism - which means, a normal, realistic setting (2019 in the city in Sydney), but it has a magical twist to it. So it is not straight fantasy, and it's definitely not a spooky ghost story. The book is funny in parts, and there are all-female characters and zero romance.

Please note that getting the genre and tone right is the most important part of the cover design. Please see comparative covers attached to the brief. Thank you :)

I require paperback covers compatible with both Kindle Direct Publishing and IngramSpark, as I will be printing the book using both services.

By far my favourite concept, it has a light tone, is feminine, is whimsical and sweet. You immediately like the main character. And the use of the glasses in the title speaks to something not too serious. The book in this design could be easily replaced with a magazine. What it doesn’t contain as much, is a hint of the magical element that is in my book. The scripted title can be a little hard to read here, particularly the author name. Legibility is the most important factor when choosing a font.
I also like this cover, as it hints at magic, and something similar could be created using magazines instead of books. Instead of the man – the main character. And, instead of the little girl – the three ghost mothers could be incorporated here. Or, at least a hint of them (ie not so literal - you could use objects to portray them). However, the colours are a little stark – I would prefer more contemporary, fresh and feminine colours.

The cover design has to be using current market trends in book design, and be appropriate to the younger readership (18-24 females). It also has to be as professional as a cover from a publisher. This also means it has to look like best-selling books in a bookstore, in the same genre. Please see attached comparative covers (I have also made notes on what I do and don't like about those comparative covers).

There are four main characters, which you can use as inspiration if you like - note you don't have to portray these characters literally - you could use objects as an example instead;

Yasmin is the 24-year-old main character, who lands the job at "The Woman's Standard" and has to learn to tell the truth. Please see character inspiration image in the attached folder.

The Ghost Mothers are:

* Audrey is from 1950, a war heroine from World War II, helping the allies to defeat the Nazis. She teaches Yasmin to be courageous.

* Deborah is the hippie from 1970, who 'wrote the book' on feminism and led the women's marches of the era. Deborah teaches Yasmin how to make friends and influence minds.

* Nicole is the climate scientist from the year 2000, who won the Nobel peace prize for her research. She teaches Yasmin to make smart decisions and trust her intelligence.

All three ghost mothers are aged 30 in the book.

* This is not a ghost story. The ghost-mothers are like helpful fairy godmothers (but fairy ghost-mothers) so there is nothing spooky about the story.
* Please stick to fun, feminine, whimsical, quirky, magical, light-hearted tones etc. Nothing too serious, as the book is quite funny.
* Please don't include clip art style cartoons, please ensure that any illustrative imagery fits the brief and is professional-looking (if using this style, which is optional).
* I would like the book to be available in bookstores and to compete with traditionally-published booked, so the standard has to be of a professional standard.
* I don't mind you using stock imagery in a creative way.
* The best design to fit the genre, tone and themes of the book (while still being easily legible) will be the winning design. Thank you for considering my competition, and good luck! :)

Hi all, Please use this revised blurb for the back cover. Please note to keep the formatting the same, and the font sizes to be similar (ie use two sizes as per this doc). Thanks so much! :)

Comienza ahora
Striking Book Cover for a Memoir
269 A$
18+ men and women mainly Australia, Europe and US will have a Christian overtone
63
entries
23
designer
Book cover for non-fiction
199 $
People who want to be prepared when SHTF.
84
entries
10
Designer
Book cover on belonging for business owners looking for the edge in their marketing
A$399
CEO's, leaders, solopreneurs and experts in their field trying to create greater certainty in their business growth and
110
entries
21
デザイナー数
Superhero book cover to appeal to teens
$199
Middle and high schoolers, ages 12 and up, that love to read about superheroes
60
entries
23
デザイナー数
Book Cover Design for a Fantasy Novel about Mermaids
EUR 359
This book will be read by French speaking readers, mostly womens, between 20 and 35 years, maybe more.
49
entries
24
diseñadores
New author need nice looking ebook cover
$199
30-60, male, female. world readers. people wanted to be healthy.
30
entries
7
デザイナー数
Más información sobre diseño de portada de libro o revista
Vea como funciona