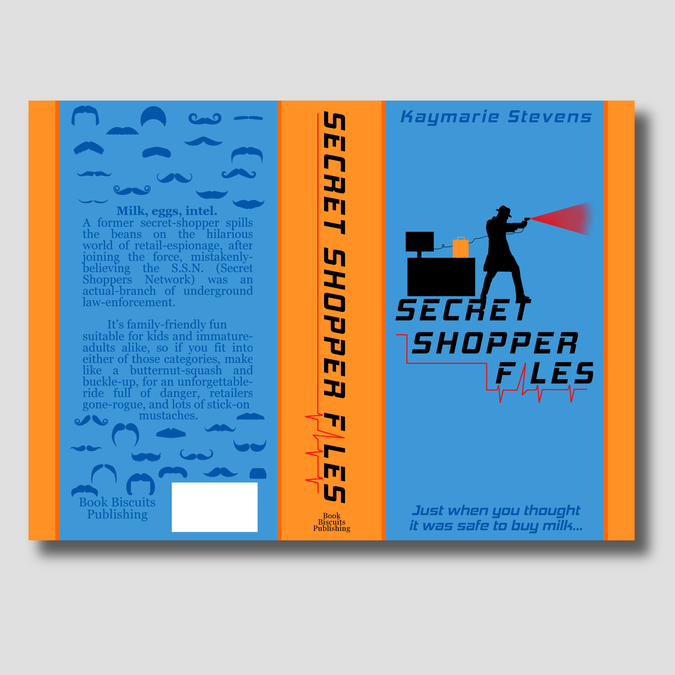 Bold and classy espionage book-cover, with a twist... 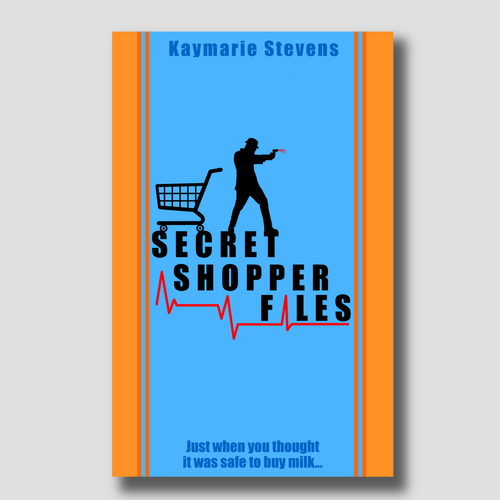 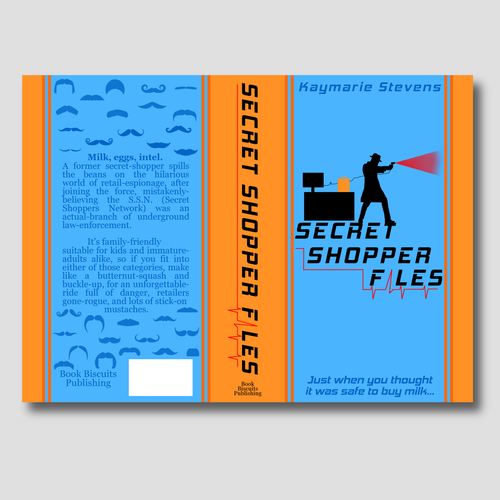 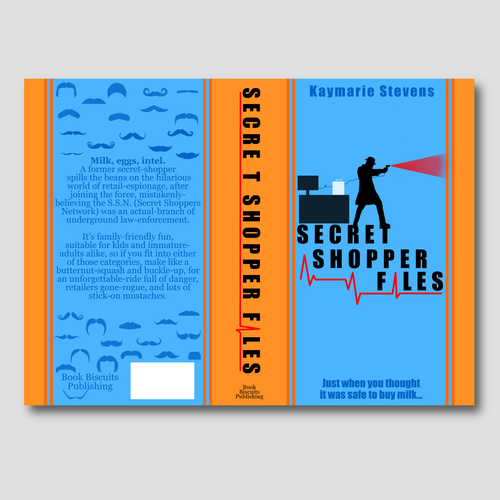 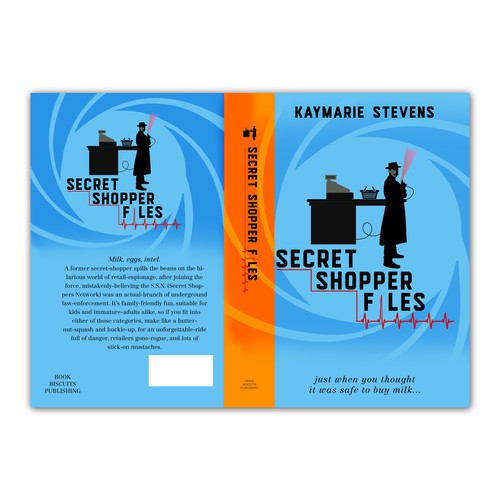 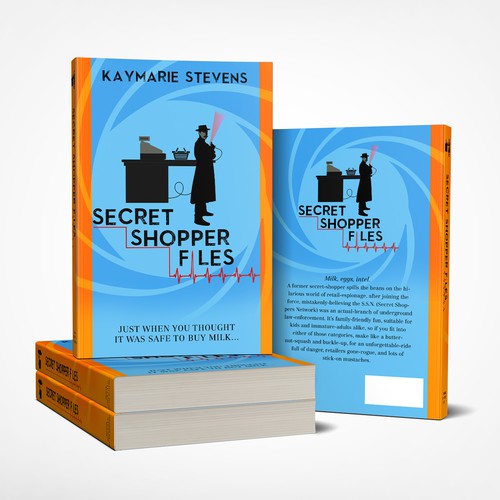 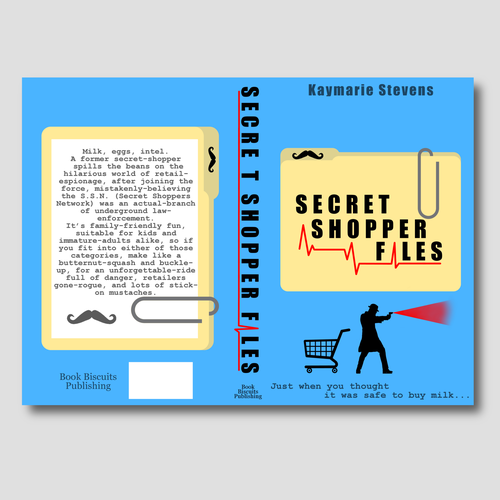 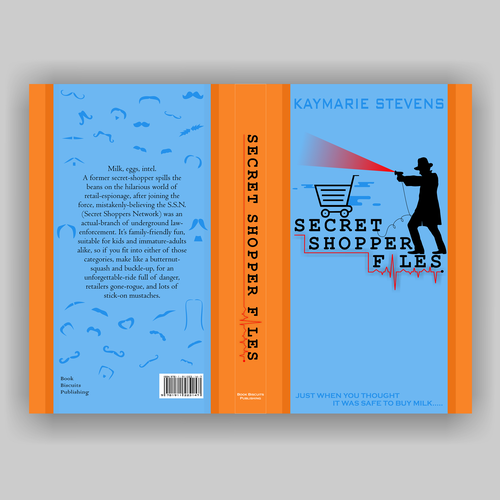 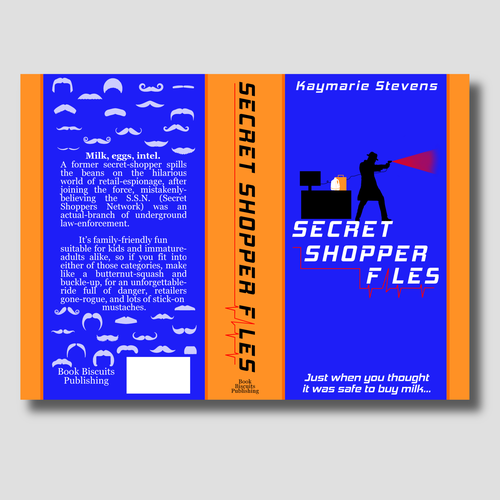 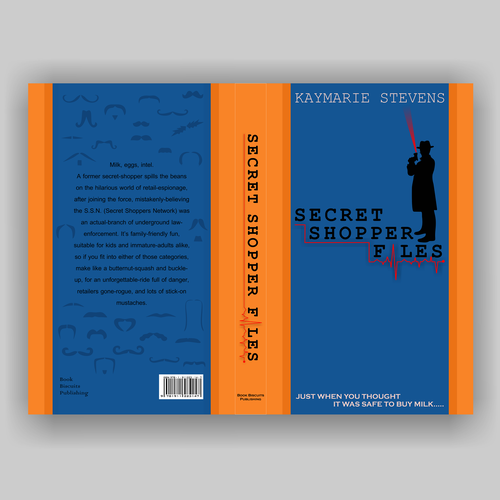 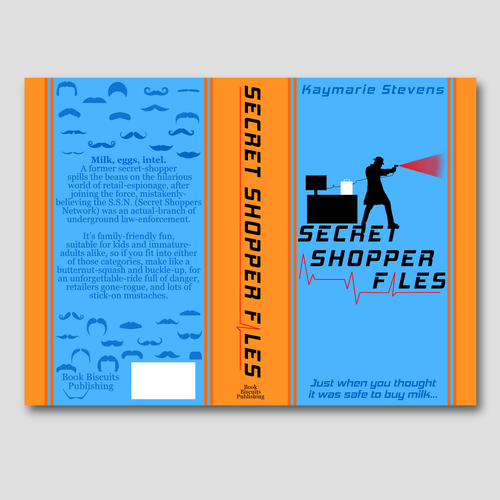 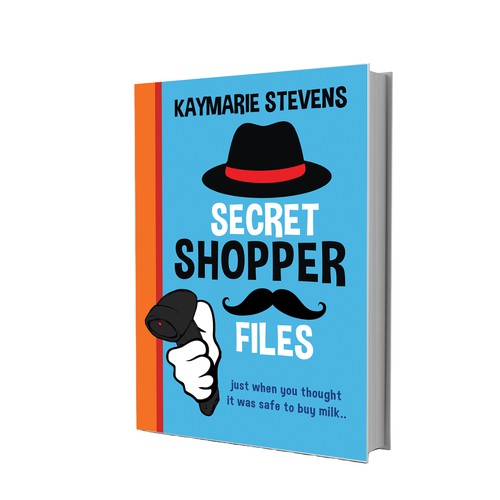 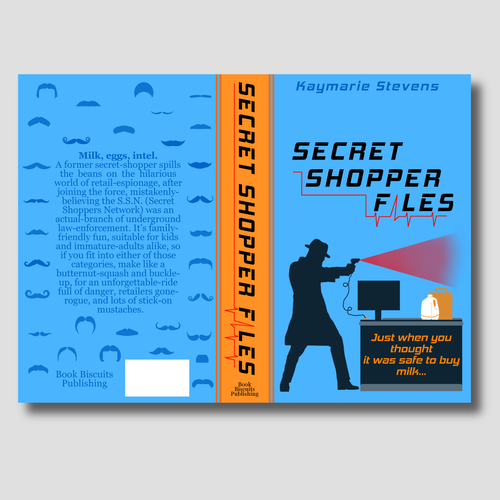 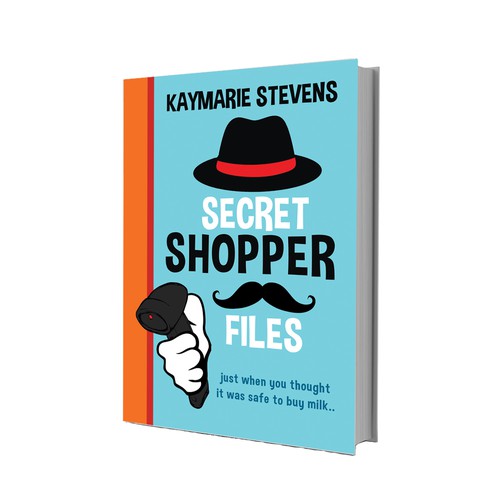 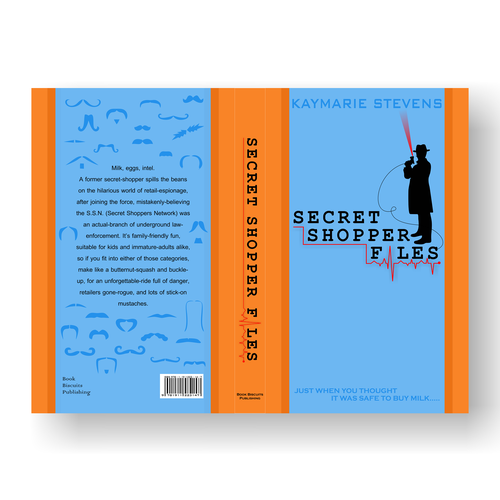 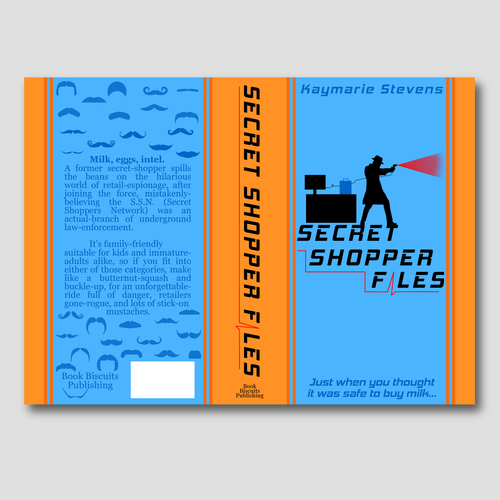 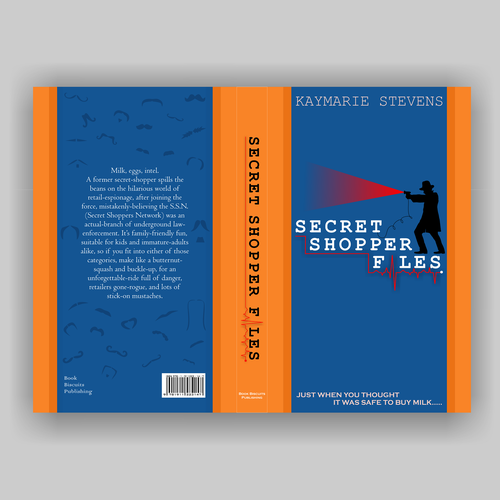 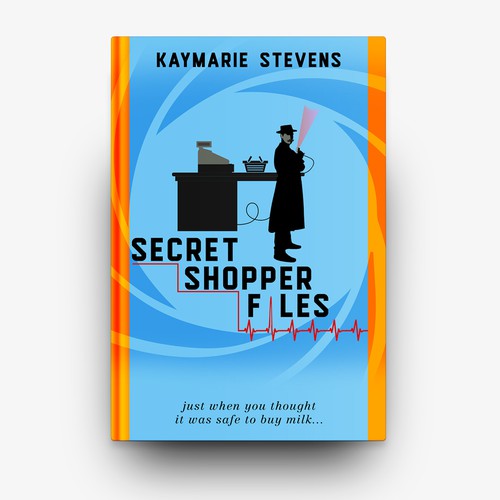 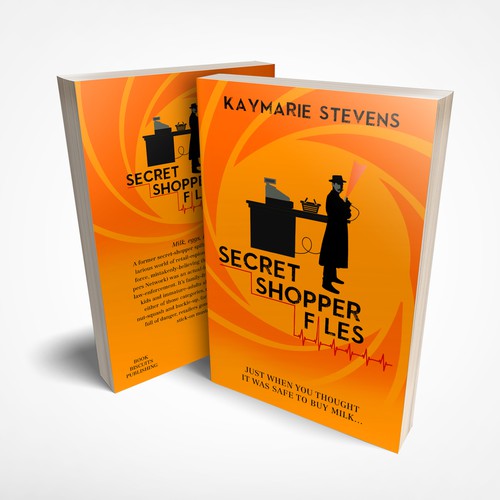 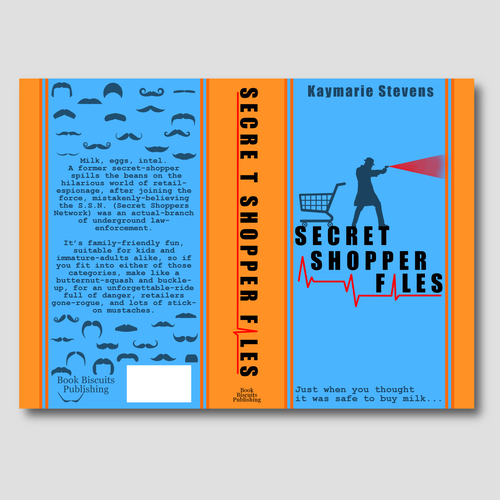 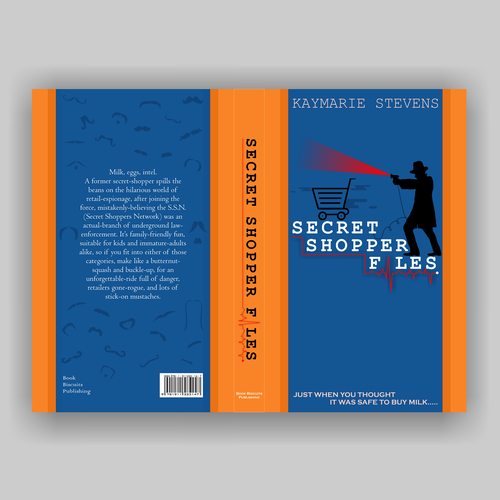 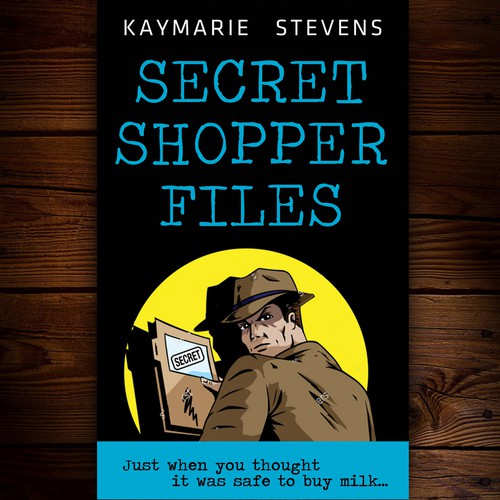 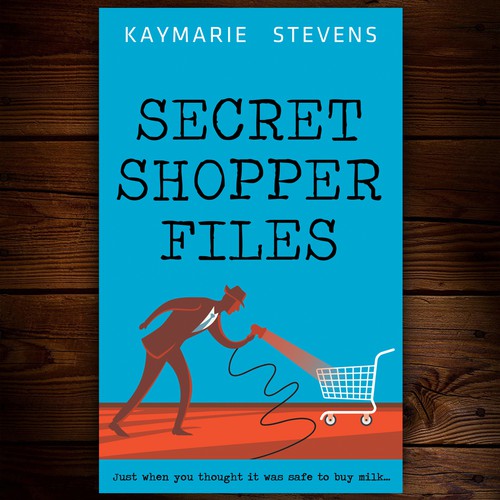 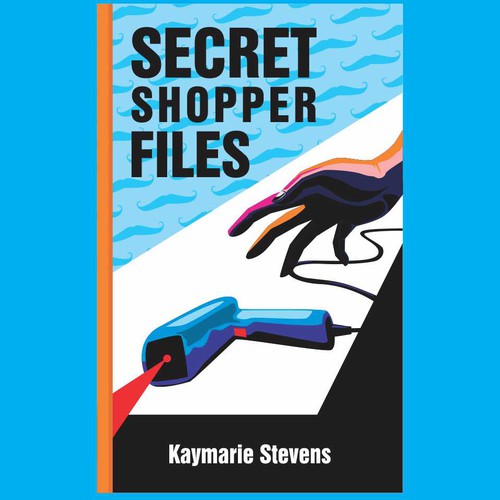 Milk, eggs, intel. A former secret-shopper spill the beans on the hilarious world of retail-espionage.

So far it seems to most captivate boys/girls 8-18 and men over 21 (it seems like an odd mixture, but just go with me on this)

Using a sort of flat, stretched-out font I like to have the title centered (in black letters preferably) with the word 'shopper' dead center, 'secret' above it and to the left, and 'files' below and to the right, with the 'i' in 'files' being an arch from a heart-rate monitor style red line, that trickles down along side the letters (starting below the 's' in secret and cascading down in a staricase type effect as a straight red line, until it gets to the word file, then it should become noticable what it is). I like to have a 1/2 in or so thick bright-orange bar on either side of the front cover (the spine being the same color) with two 1/8 in or so pinstripes of a slightly darker shade of the same orange on the inside edges of the first two bars. (Just to give to the cover a more streamlined effect) Now here's were I kinda need a little more creative-juices from you designers, I want to make sure the cover stays bold, bright, easy to follow, and still incorperate some ideas without making it look too busy or overcomplicated. I had an Idea, where a silluhette of the main character, Ralphie (the secret-shopper in question) is holding up a price-scanner in a James Bond-style gun pose, but it'll have to be obvious that it's just a price scanner, (so maybe with a red-laser light visible on the end, and connected by a cord to a cash-register) but have it all in miniature, so it fits on top of the title-letters (so it looks like he's standing on them). Feel free to play-around with the concept as much as you like. The main thing is just going to be making sure it looks like a spy-novel cover, but you can still tell it's about retail. (Weird requirement, I know) Ralphie wears a fadora/mustache/overcoat (with the mustache constantly changing in variety) for most of the story, and I'll provide some refrence photos below.

Make sure the red arch/heartbeat line looks like an 'i' and not an 'a', making sure all lettering on the cover/spine is all capitalized. NO DULL COLORS. Seriously, I mean, do go toooo overboard, but, I really want it to pop.

Comienza ahora
Minnesota Cabin scene to appeal to women who like love stories
399 $
Female, USA, 18-50
142
entries
27
Designer
I need your inspirational eBook cover design and expert advice on refining my subtitle
€ 299
Frustrated people (early-adulthood to middle-aged) who're too busy and too distracted to keep in shape; and who're tired
158
entries
22
Designer
The Sword & Mr. Stone -- a modern day search for Excalibur
US$ 199
People interested in humor and fantasy.
43
entries
12
designers
paper back and ebook cover
£ 319
Someone is reading this book to learn the most effective way to write a to-do list that will keep them motivated and pro
51
entries
20
designers
Finance BOOK COVER needed. Prefer clean, light simplicity and a drawn illustration.
US$ 499
Self-employed professionals, typically men ages 30-50 who make over 75k per year single or 100k joint, maybe they work f
35
entries
12
designers
Captivating cover for the book "The Way Home"
299 US$
People in general interested in life stories. People that struggle with addiction.
121
entries
49
diseñadores
Más información sobre diseño de portada de libro o revista
Vea como funciona