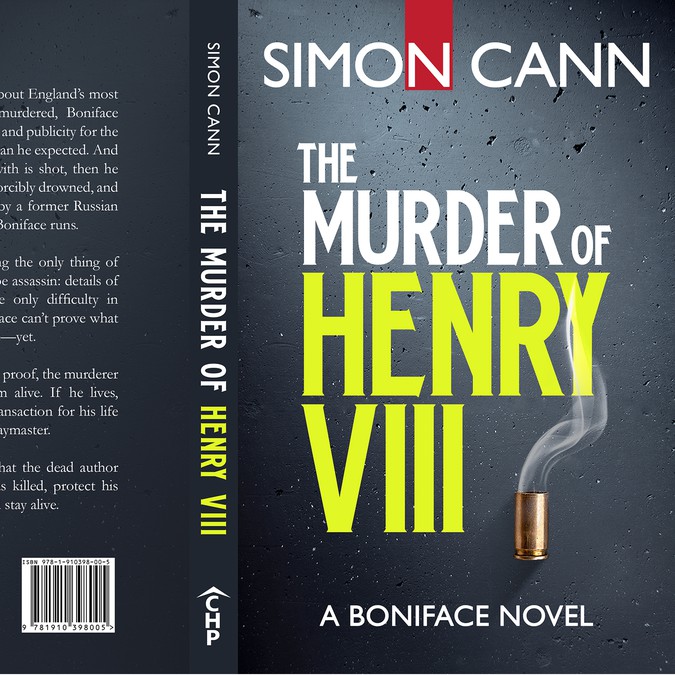 book cover for crime/mystery thriller: The Murder of Henry VIII 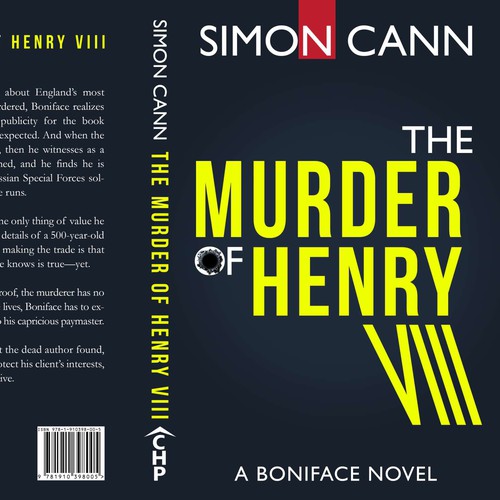 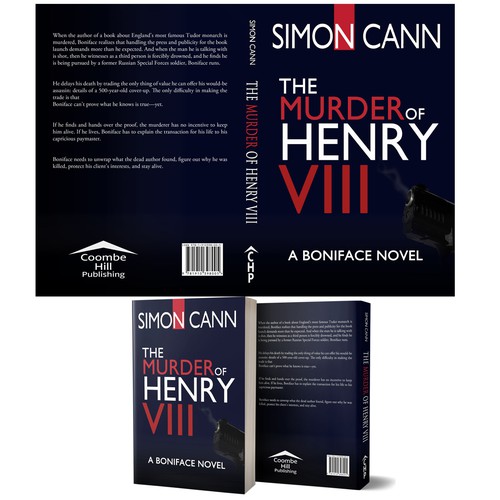 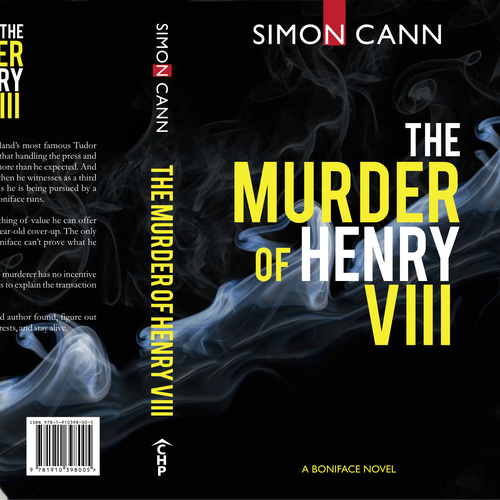 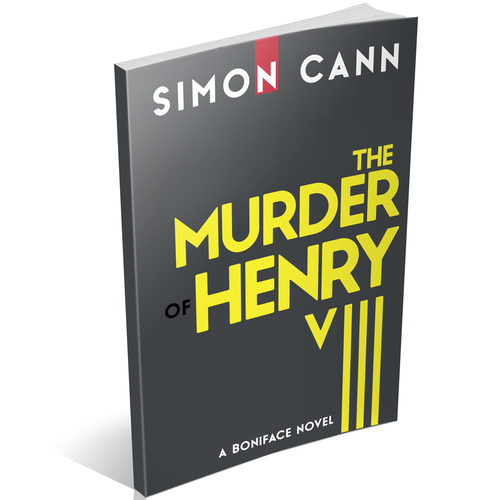 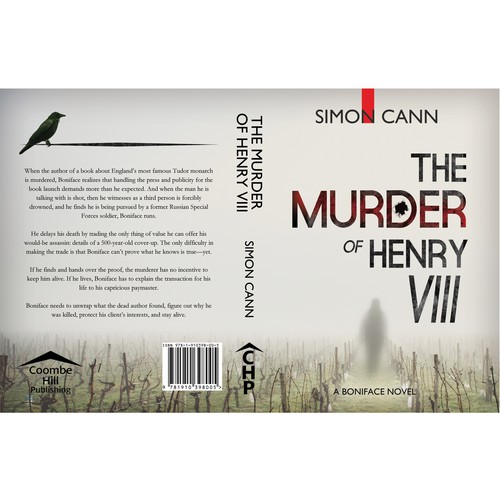 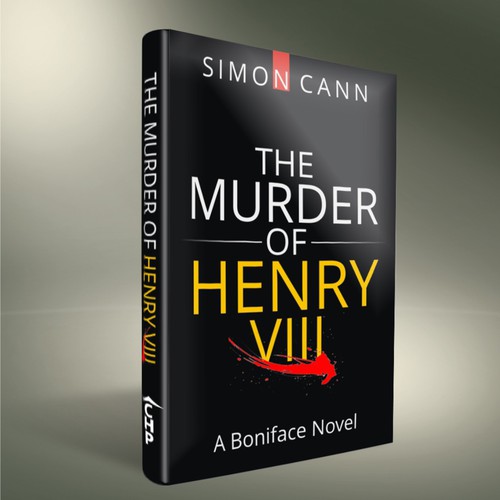 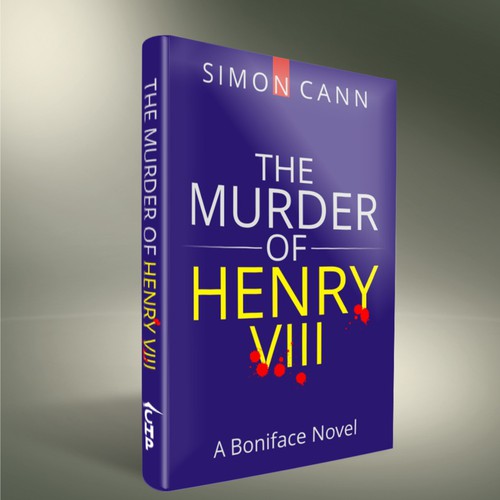 The readership is broad in terms of age and geography. Typically, readers are 30 to 60 (although there are many readers outside those boundaries) and there is an equal balance of men and women.

The cover is for a book in the crime/mystery genre titled: “The Murder of Henry VIII”.

The content of the book tends toward dark—but not excessively dark. A dark green/dark blue/gray cover (rather than black) hue may work well in this context.

I have attached a few rough ideas below which should give you an idea of the basic layout and overall vibe I am aiming for. Taking this further, here are some examples of the kind of book cover that the audience may be used to seeing:

As well as being stunning, the cover must also look great as a thumbnail (say 100px). At the small scale, the title and author name must be clear.

There are hints/suggestions/preferences here. Please feel free to ignore everything I have said if your idea blows me away.

The title font (and the arrangement of the title block) is for the artist to choose (the gun-like motif in the examples is not a requirement, but if you want to do something with this idea, please do).

To stay consistent with the series and the author brand, some of the font choices are limited:

* The author name and series tagline should be set in Gill Sans (or visually similar alternatives such as P22 Underground). Also in the example covers, note the red stripe over the “N” in Simon—this element should be followed through unless there is a good artistic reason to drop it.

* The back cover text should ideally be set in Garamond although the artist should feel free to consider alternatives if felt to be more appropriate.

It is probably also useful to know what will lead to unhappiness on your part. First, any hint of Tudor England (“ye olde English” typefaces, wood effects, and so on) will ensure the cover is rejected immediately. This is a modern crime thriller—it should reflect that we are in 2016.

While modern, this is not a techno thriller. Elements of techno (in particular “computer” fonts) will be swiftly rejected.

Excessive gore/violence is not required. The key here is subtlety. A single drop of blood could work—blood splatter will not. The tip or a gun/a wisp of smoke might work—an assault rifle won’t. The focus should be on the risk, not on the murder.

Simon Cann
The Murder of Henry VIII
a Boniface novel

When the author of a book about England’s most famous Tudor monarch is murdered, Boniface realizes that handling the press and publicity for the book launch demands more than he expected. And when the man he is talking with is shot, then he witnesses as a third person is forcibly drowned, and he finds he is being pursued by a former Russian Special Forces soldier, Boniface runs.

He delays his death by trading the only thing of value he can offer his would-be assassin: details of a 500-year-old cover-up. The only difficulty in making the trade is that Boniface can’t prove what he knows is true—yet.

If he finds and hands over the proof, the murderer has no incentive to keep him alive. If he lives, Boniface has to explain the transaction for his life to his capricious paymaster.

Boniface needs to unwrap what the dead author found, figure out why he was killed, protect his client’s interests, and stay alive.

##Notes about the cover elements

The barcode has been created at 300 dpi and should be reproduced at 100% size (or thereabouts) and must remain as black bars on a white background. The barcode should be located toward the bottom-right of the back cover.

The two publisher logos can be sized as the artist sees fit, and equally the artist is free to adjust the colors of these logos to fit with the theme. The “wide” publisher logo should be located toward the bottom-left of the back cover.

A single piece “wraparound” cover is required—this will be used for the print version of the book. The front cover element can then be produced from this wraparound.

The dimensions of the wraparound should therefore be: 302 mm x 222 mm

The final product is required in PDF format (PDF: PDF/X-1a:2001); 300 ppi; CMYK color space. The printer has a requirement that CMYK total value should not exceed 240%. The recommend a rich black with CMYK values = 60% Cyan/40% Magenta/40% Yellow/and 100% Black. The ink density limit can readily be checked in Adobe Acrobat Professional.

In addition, the front cover and back cover should be delivered as high resolution PNG files using the RGB color space.

At the end of the project, the original working files (PSD/INDD/AI) and source artwork should be delivered for archiving.

BISHOP - book cover for dramatic thriller/mystery
US$600
We author and publish books. Our target audience is fiction book enthusiasts....
109
entries
24
designers
Design a Book Cover for an Ocean Novel about Jellyfish
$299
Fiction for an adult audience...
123
entries
28
designers
Urban Fantasy Cover Art (but not too cliche, I promise!)
$299
Small press publisher of fiction and nonfiction work....
75
entries
17
デザイナー数
Baseball + Racism = My Book Cover
US$299
I write nonfiction books and deliver lectures about events that occurred in America during the 20th century. My targe...
132
entries
20
designers
Create a great science fiction adventure cover!
USD 299
I am looking to find more readers....
23
entries
10
designers
Design a cover for children's adventure short read
£209
We are an indie publsihing company creating childrens fiction....
38
entries
9
designers

Comienza ahora
Design a great Thriller e book cover about spooky lucid dreams, wich reach into the readers reality.
EUR 459
I need an ebook Cover. My book is a thriller, its name is "Luzide Träume" I need a design, what fits to the Thriller ...
271
entries
70
designers
Design book cover for "The War-Bringer" by an Indie Author .
$499
I'm an independent author looking for a design for a book cover....
74
entries
11
designers
Urban fantasy author needs exciting book cover design.
$299
Urban fantasy author who writes about vampires, witches, werewolves and other supernatural beings for entertainment....
55
entries
8
designers
Book Cover Design For First Book In Series - Fun Chick Lit/Romance
299 US$
Galahads Press is a self-publishing company. We are focused on writing fiction in the chick lit genre with a focus o...
50
entries
13
designers
Eye-Catching Vampire Novel Cover
€279
The book is a Vampire Novel. The aiminggroup should be mainly females between 25-45....
169
entries
31
designers
Take us to new heights by designing a book cover first of 3 titles
$499
Provide digital promotion to individuals and organizations seeking to share cooperation via the masters of messages....
169
entries
18
diseñadores
Más información sobre diseño de portada de libro o revista
Vea como funciona