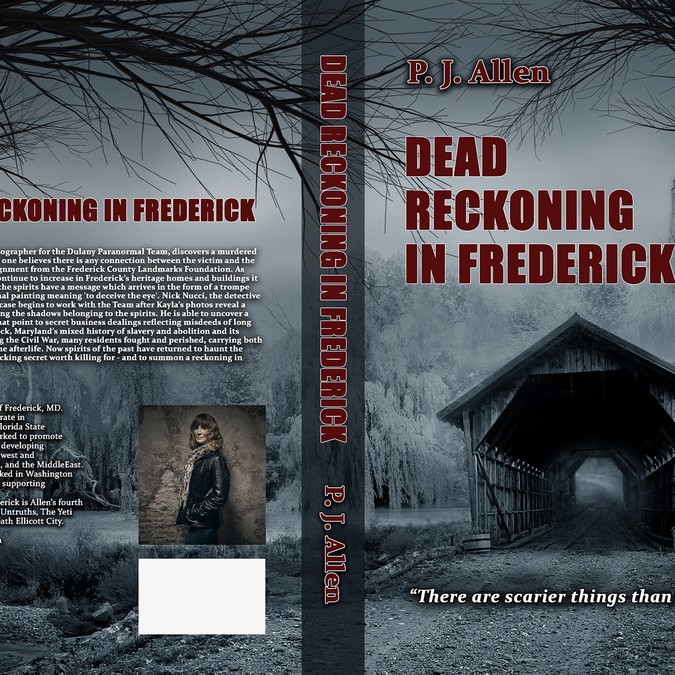 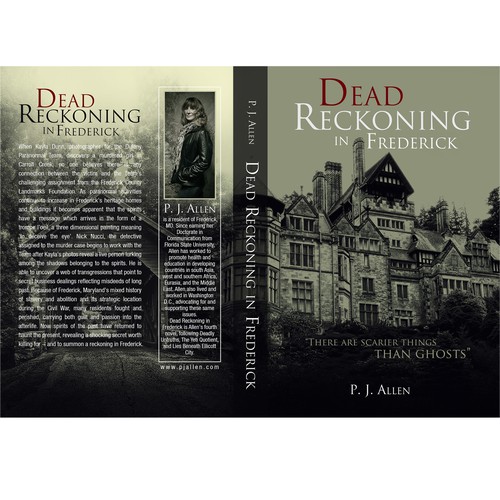 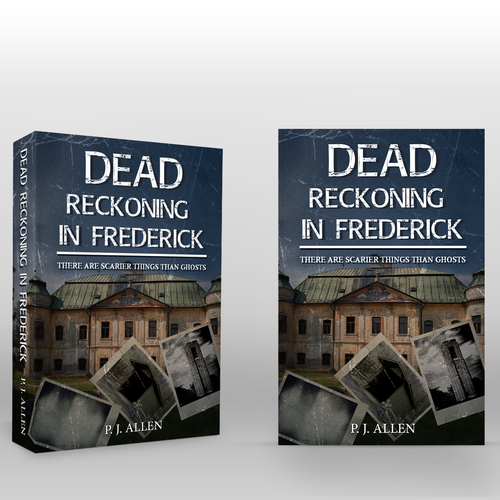 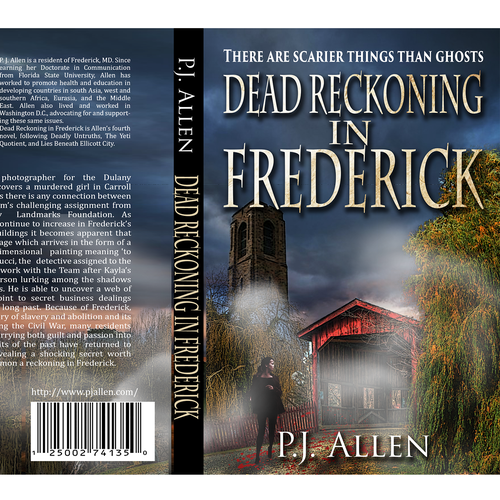 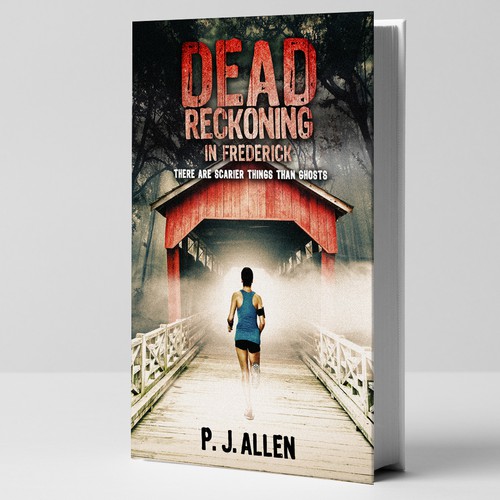 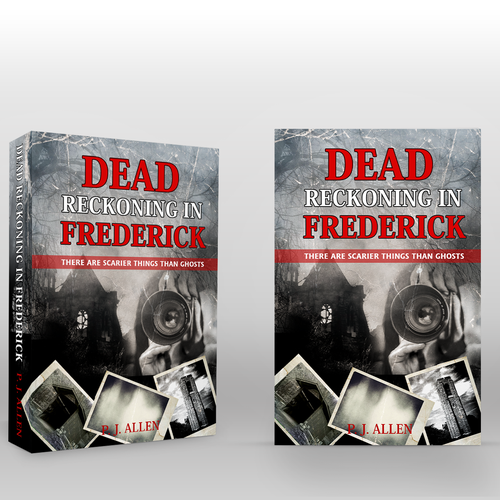 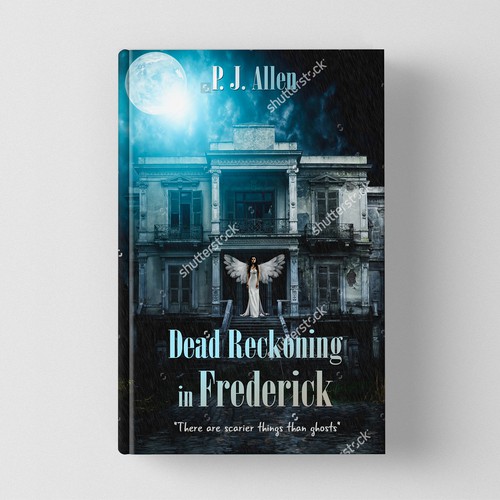 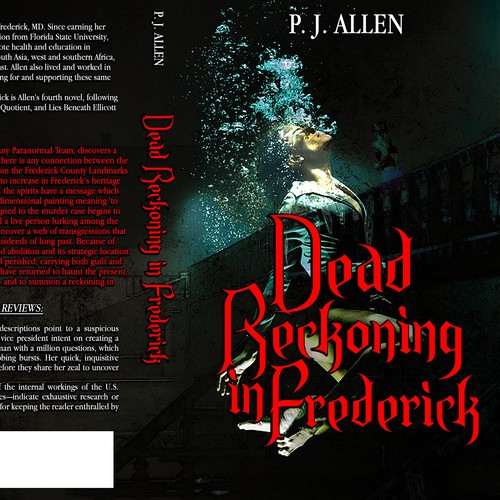 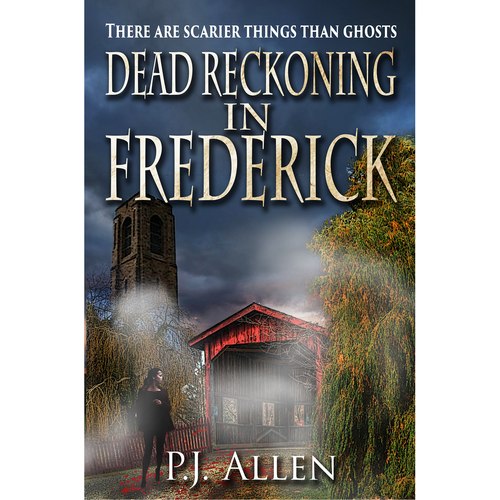 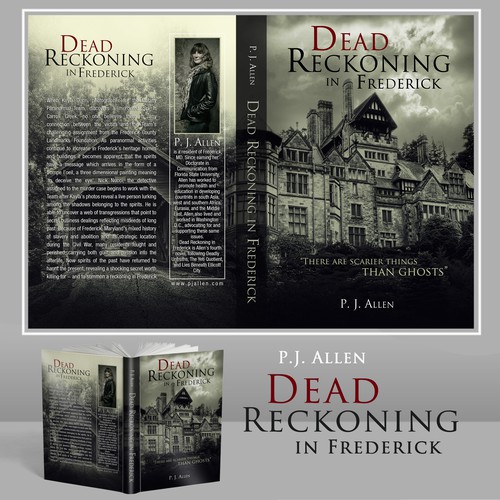 P. J. Allen is a resident of Frederick, MD. Since earning her Doctorate in Communication from Florida State University, Allen has worked to promote health and education in developing countries in south Asia, west and southern Africa, Eurasia, and the Middle East. Allen also lived and worked in Washington D.C., advocating for and supporting these same issues.
Dead Reckoning in Frederick is Allen’s fourth novel, following Deadly Untruths, The Yeti Quotient, and Lies Beneath Ellicott City.

Praise from Kirkus Reviews thus far:
Deadly Untruths: “From the very start, scathing descriptions point to a suspicious character: the megalomaniacal, socially obnoxious vice president intent on creating a new world order in the Middle East. Andie is a woman with a million questions, which the author skillfully compresses into succinct, probing bursts. Her quick, inquisitive mind will appeal to readers, and it won’t be long before they share her zeal to uncover the truth.”
The Yeti Quotient: “Briskly paced…expositions of the internal workings of the U.S. government—specifically the Senate and the lobbies—indicate exhaustive research or familiarity with the halls of power. Allen has a knack for keeping the reader enthralled by the suspense.”

When Kayla Dunn, photographer for the Dulany Paranormal Team, discovers a murdered girl in Carroll Creek, no one believes there is any connection between the victim and the Team’s challenging assignment from the Frederick County Landmarks Foundation. As paranormal activities continue to increase in Frederick’s heritage homes and buildings it becomes apparent that the spirits have a message which arrives in the form of a trompe l’oeil, a three dimensional painting meaning 'to deceive the eye'. Nick Nucci, the detective assigned to the murder case begins to work with the Team after Kayla’s photos reveal a live person lurking among the shadows belonging to the spirits. He is able to uncover a web of transgressions that point to secret business dealings reflecting misdeeds of long past. Because of Frederick, Maryland’s mixed history of slavery and abolition and its strategic location during the Civil War, many residents fought and perished, carrying both guilt and passion into the afterlife. Now spirits of the past have returned to haunt the present, revealing a shocking secret worth killing for - and to summon a reckoning in Frederick.

Residents in and around Frederick, MD. Female and male readers 15 years of age and above. Readers who enjoy historical fiction, the paranormal, mystery and intrigue, and Civil War buffs.

JPEG or TIFF format and have a resolution of 300dpi. If the image occupies the whole cover then the designer will have to provide bleed space for printing. 1/8 of an inch would be fine.

Overall, it should provide for a spooky intrigue. The cover could represent a dilapidated Victorian home (in the background, maybe even difficult to discern), the covered red bridge (file added at the bottom) that Kayla Dunn, the paranormal photographer and protagonist, jogs across when she discovers a body at the bottom of the banks of Carroll Creek, on a very early foggy morning in Baker Park. The park is dotted with Willow trees and the Bell Tower and Carillon (file added at the bottom). Another image could be a Trompe L’oeil (to deceive the eye), e.g., angel girl, statue - the images are actually flat but appear to be three dimensional (file added at the bottom). The images I have provided are copyrighted. I have also provided two of my own book covers (from 99 Designs!) that I like.

Beautiful BB cover for a SURVIVOR
299 $
Adult Women
154
entries
32
Designer
Book cover for a hilarious book about cats
399 $US
People in their late 20s and 30s; people who love cats and cat memes; people who love crime novels; people who love hist
60
entries
22
designer graphistes
Join my adventure in love & erotica. Design a hot cover for this intellectual romance.
US$ 399
Women or Men between 18 and 99. People who love to read erotica and steamy romance. The book is set in Portland, Oregon.
141
entries
26
designers
Create a Bestselling Book Cover
CAD 269
New Mothers, Second Time Mothers Age - 20 to 40 Years of Age
82
entries
25
diseñadores
We need an EYE-CATCHING, STOP IN YOUR TRACKS, book cover for our Personal Finance Lead Magnet
199 $
Anyone who has an interest in personal finance. Generally, 18+, male and female, and primarily in North America.
34
entries
6
Designer
Book Cover Design - (Front Only)
GBP 159
Men & women 30-50 years old 1-2 stone overweight
72
entries
11
diseñadores