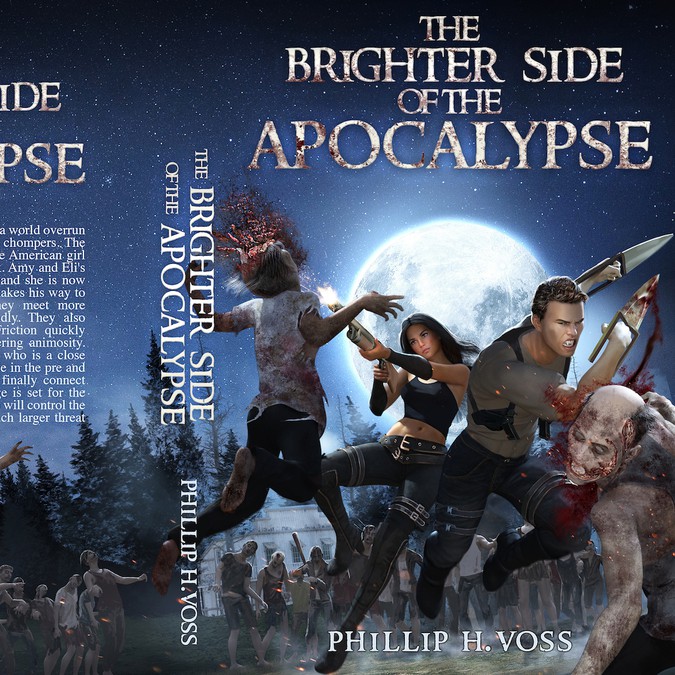 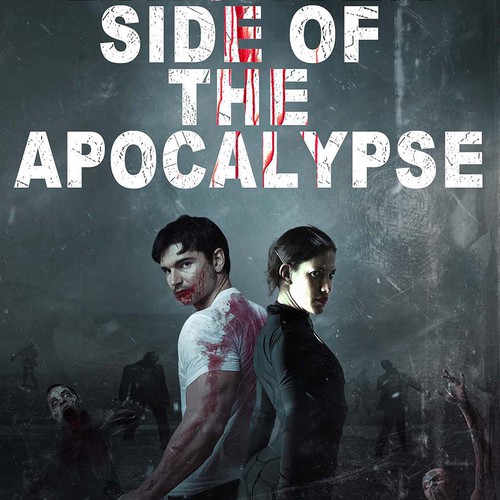 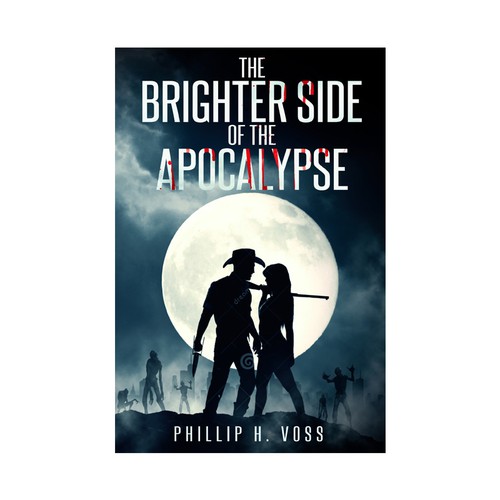 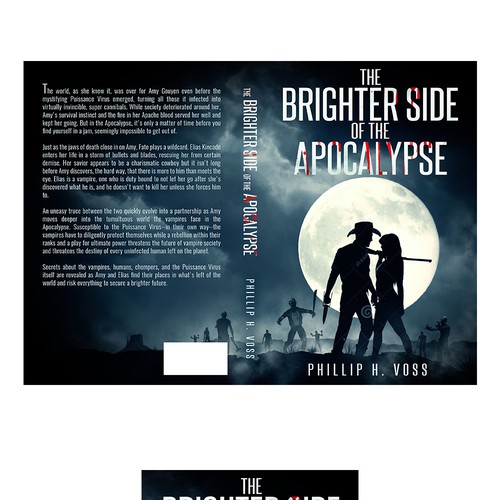 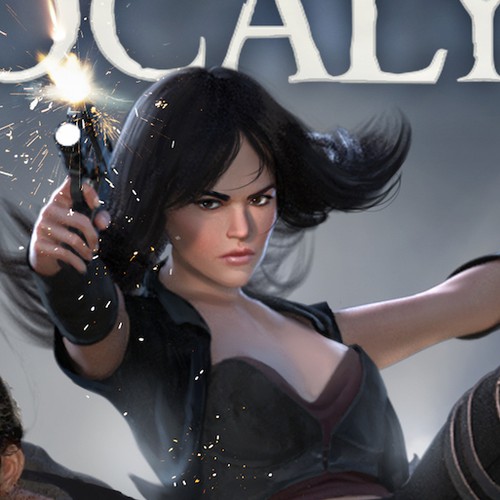 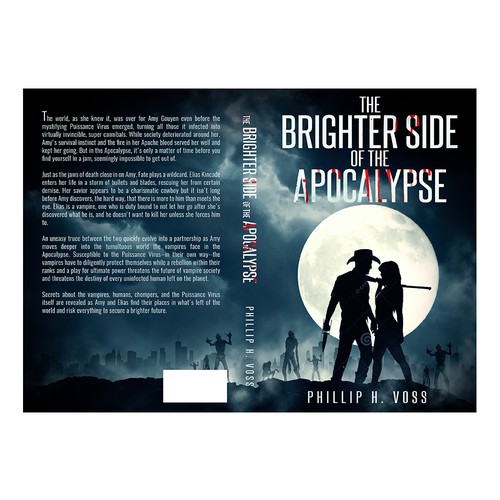 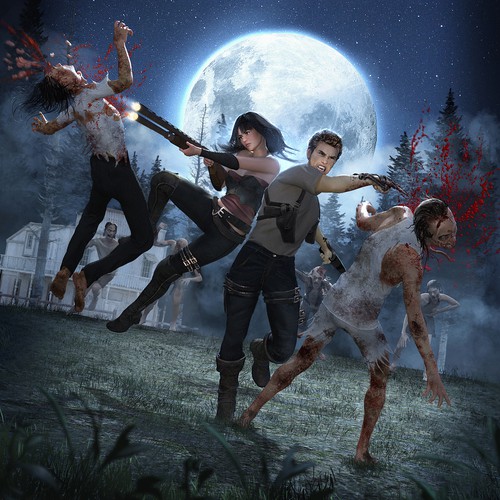 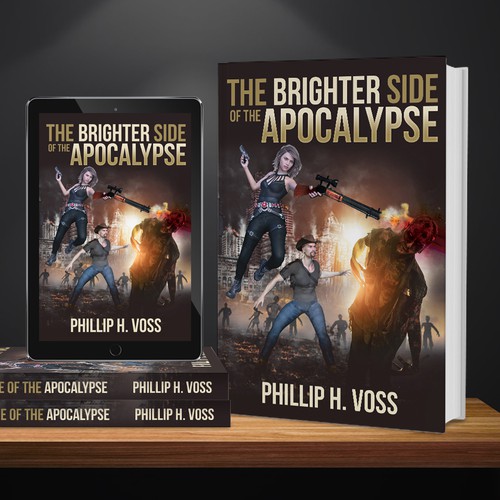 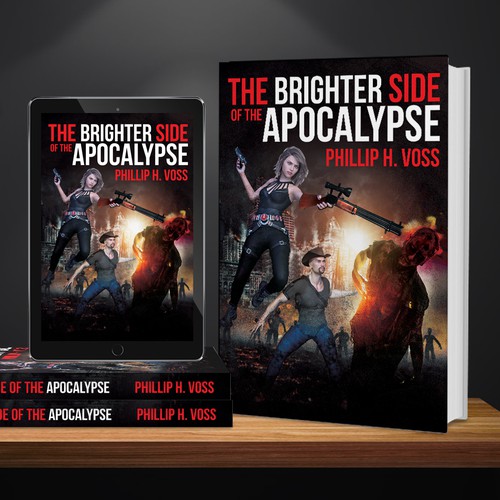 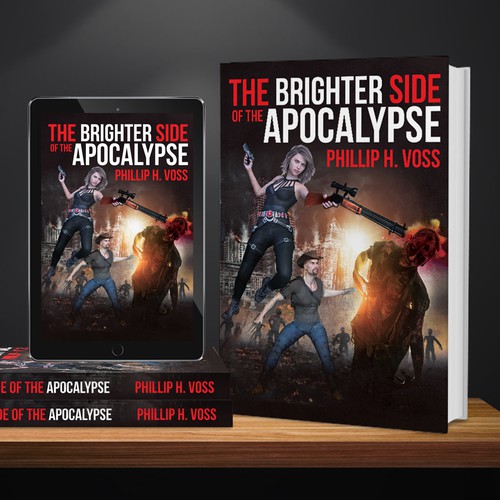 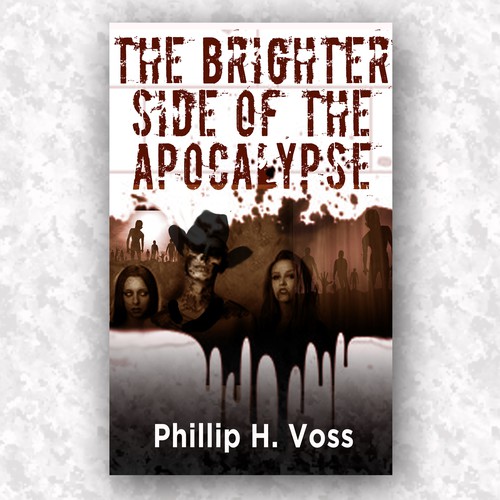 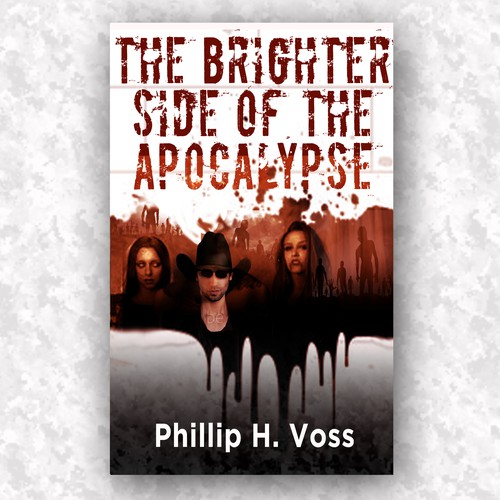 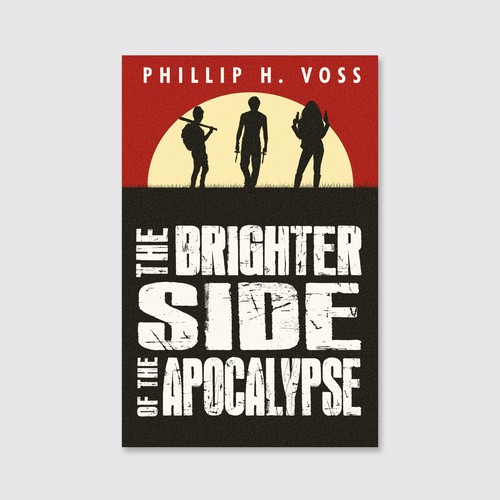 The Brighter Side of The Apocalypse

Philip H. Voss is the author's pseudonym. He was born in Trinidad, in the West Indies, and lived most of his life in New Jersey, U.S.A. He enjoys working in Social Services, and serves as an Executive Board member of his branch of the NAACP. One or his goals is to help pet owners get healthcare that they can't afford for the furry members of their family.

The Brighter Side of the Apocalypse is set in a world overrun by zombie-like, superhuman cannibals called chompers. The main characters are Amy, a cute, tough Native American girl and Eli, a vampire with a rugged cowboy look. Amy and Eli's paths have crossed under dire circumstances and she is now traveling with him across dusty Texas as he makes his way to meet his maker, Lygia. Along the way they meet more vampires, some friends, some not so friendly. They also encounter soldiers wearing power armor. Friction quickly develops between the two groups with lingering animosity. The soldiers are in search of Sig, a vampire who is a close friend of Eli's and who also plays a pivotal role in the pre and post apocalyptic world. When Eli and Amy finally connect with Lygia, secrets are revealed and the stage is set for the bloody battles to come that will determine who will control the future; humans, vampires, chompers, or a much larger threat which has yet to surface.

I need a cover that transmits a connection between Amy and Eli, and their reliance on each other amidst the perils of an apocalyptic world. Maybe have them poised to fight along side each other. Eli's vampire fangs should be noticeable and his katars (bladed weapons) should be drawn, bloodstained and held in an attack position. Amy should be handling one of her guns. Besides featuring Amy and Eli, the illustration should also include gory visuals of what chompers are like and convey how dangerous they are, especially when there is a horde of them. If possible, I'd like for power armored soldiers and Sig should be included but not prominent. The same thing for Lygia, if she can be incorporated in a way that suggests a love triangle between her, Eli and Amy. The challenge is to create an image that undoubtedly says action-packed zombie apocalypse. And don't forget, gore is good. Chompers devour people until they are all but bones in a puddle of blood. And they don't die unless they receive severe head trauma; decapitation eventually works too, so feel free to add severed heads if it helps bring the image together. The following are more detailed descriptions of the characters.

* AMY -- 18 years old. Her native American features are strongest, but she also has high cheekbones and hazel eyes. Slim frame, subtle curves. Jet black hair. Skin like a cinnamon colour. She's cute and hot tempered. Her favorite weapon is a 30-30 rifle, but is also good with a shotgun and Beretta 9mm.

* ELI -- Looks 20 years old. He has an athletic build with lean muscles. He has unkempt curly brown hair. The stubble on his face gives him a gritty look. He wears T-shirts, jeans, cowboy boots, wrap around sunglasses, and sometimes a black cowboy hat. IMPORTANT: Eli wears a double-sided shoulder holster that houses 2 black Desert Eagle handguns on each side. He also has two katars; a sheath for each is strapped on either of his thighs. Each katar has a 9" blade and the H-shaped handles cover half of his forearm.

* CHOMPERS -- They are described as having wild hair, dirty skin, grimy clothes. There is dried blood staining their face and necks. Painful hunger in their eyes. Chompers are like zombies but they do not show signs of decay. However, some chompers should be severely mangled or mutilated. I would like at least one of them to have skin torn from part of its face, exposing teeth and muscle tissue. Chompers are mindless but some instinctively use whatever they get their hands on to bludgeon their meals if they have to.

* ARMORED SOLDIERS -- Their power armor resembles Iron Man, but painted black. The armor has machine guns built into the right arm and a harpoon launcher in the left. Some armored soldiers also carry a electrocution net launcher that looks like small version rocket launchers.

* Lygia -- Redhead. Curvy figure. She usually has a serious demeanor but she was born at the height of the Roman Empire, and she's practically vampire royalty, so try to give her a goddess-like appearance.

* SIG -- Nordic features. Blonde hair only a couple inches long. Tall and muscular. He hates the armored soldiers with a passion, particularly the leader of their squad.

New Cover for Amazon Bestseller Dystopian Book "Fever Rising"
499 $US
Young/New Adults into dystopians and sci-fi/fiction.
58
entries
14
designer graphistes
Elemental Samurai Superhero adventure for 90s kids
US$ 299
This story and the other books in this series are written for "old millennials." The generation of kids who grew up with
47
entries
16
designers
Fairytale Retellings - a rebrand for a four-book series, starting with an Aladdin retelling!
US$ 329
young adult story, anyone who enjoys aladdin retellings, but aimed at teens, specifically girls.
56
entries
22
designers
Design the cover of the next NYT Bestseller!
299 $
Anyone who enjoys thrillers. No specific demographics.
45
entries
26
Designer
Book cover for non-fiction
199 US$
138
entries
21
diseñadores
Exciting science-fiction novel for adults and kids
1.099 AU$
Science fiction fans (anyone who watches Star Wars, Starship Troopers etc.), geeks, moms and dads, teenagers, it's quite
61
entries
10
Designer

Comienza ahora
Book cover design (Redesign) to capture young adult audience (mid grade)
GBP 159
The book is aimed at 8-12 year olds but it is written in a similar style/influence of Harry Potter and His Dark Material
30
entries
8
diseñadores
Catholic Book Cover Needed
799 USD
Devout Catholics in their 60s and 70s.
81
entries
17
designer
Book Cover Design book on Emergency Work From Home in a Pandemic
269 CA$
Leaders in small and medium sized business plus leaders of organizations that need to support remote work and Emergency
172
entries
26
Designer
Book cover needed for ultimate fan guide to the Fast and Furious movie franchise.
749 $
Fans of the "Fast and Furious" movie franchise. These movies are consumed by a massive global audience, ranging in age a
110
entries
37
Designer
Design the cover of a book about the healing power of God
US$ 399
Christians who are tired of being sick and want to receive the healing power of God.
43
entries
19
designers
Amazon Ebook Cover for german ebook (Topic: Motivation for studying)
299 €
Students
96
entries
16
Designer
Más información sobre diseño de portada de libro o revista
Vea como funciona