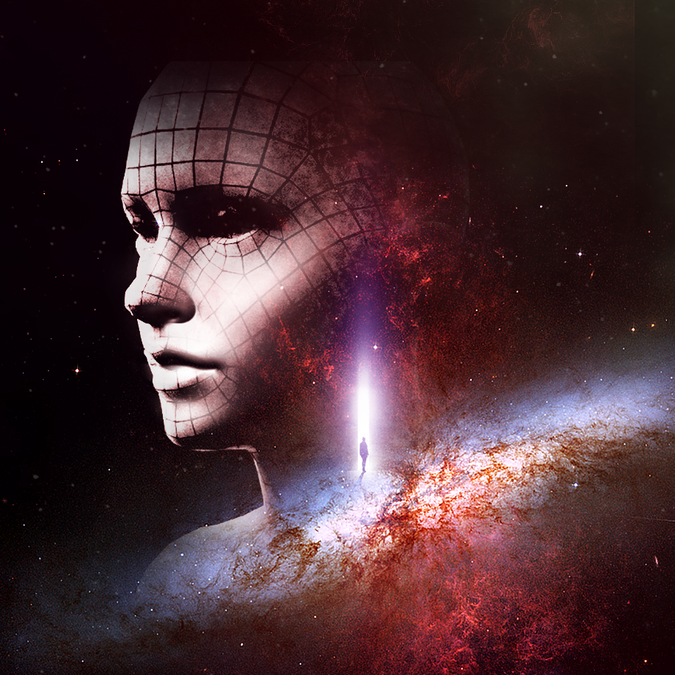 Book cover for SF novel "Retaliation" (2nd in a series) 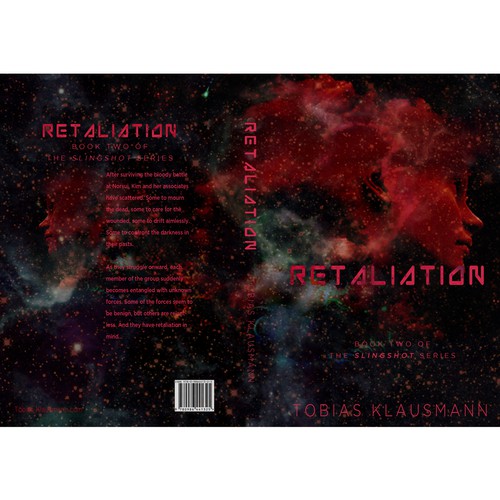 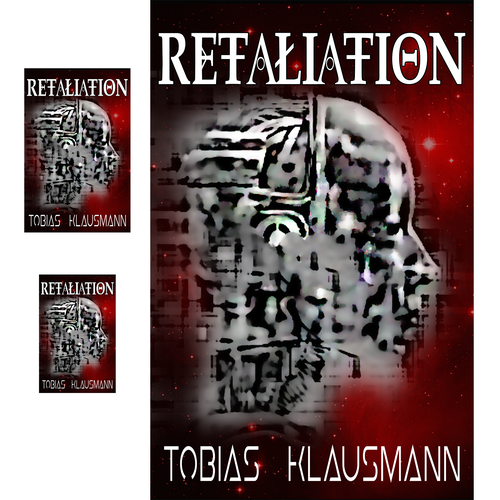 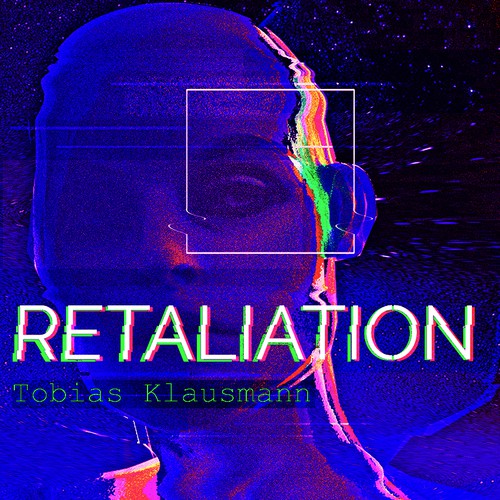 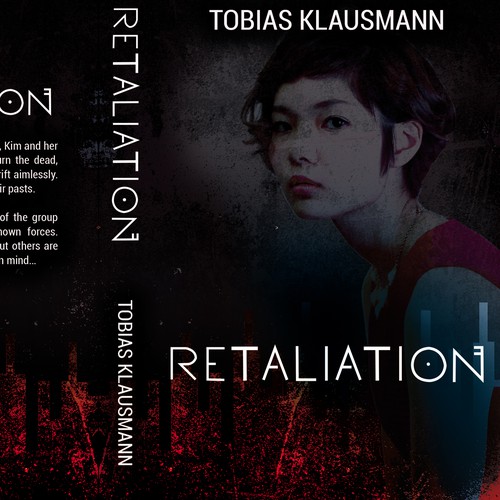 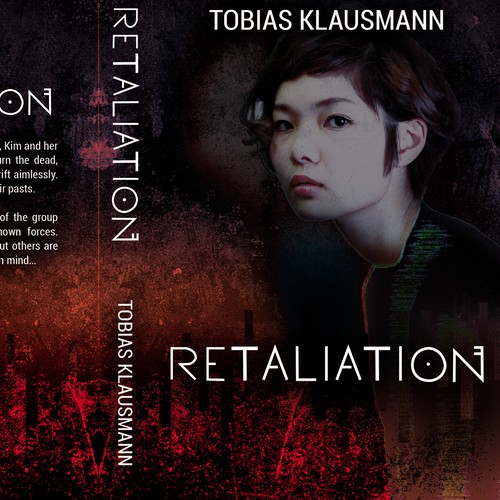 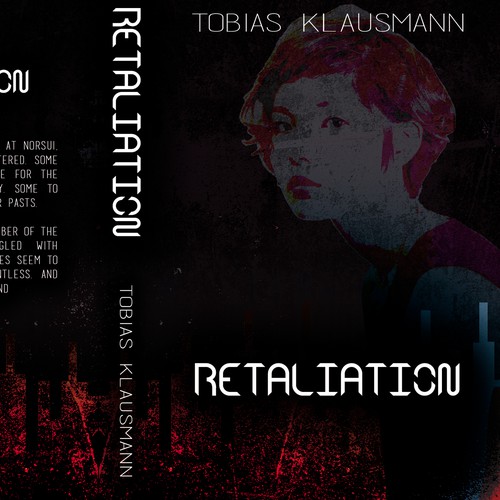 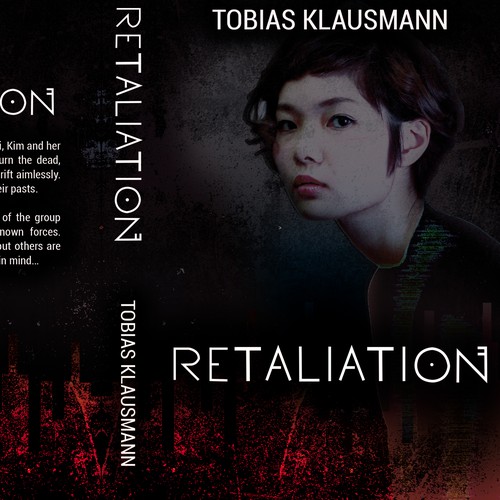 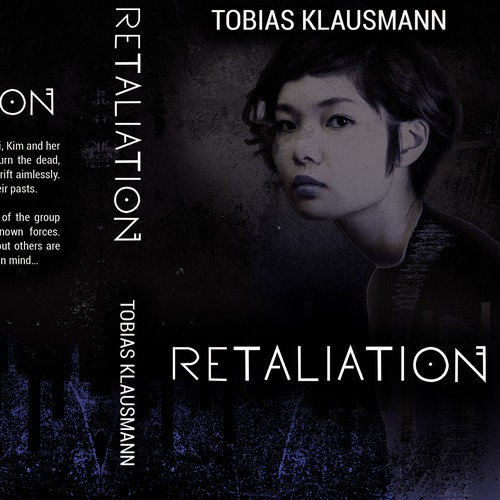 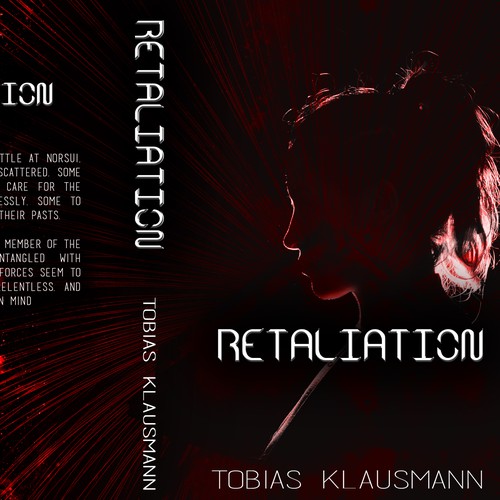 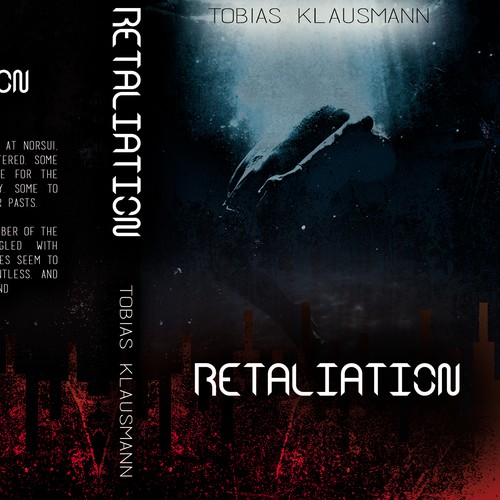 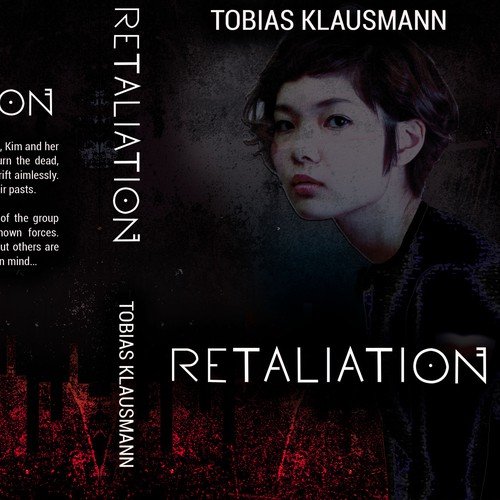 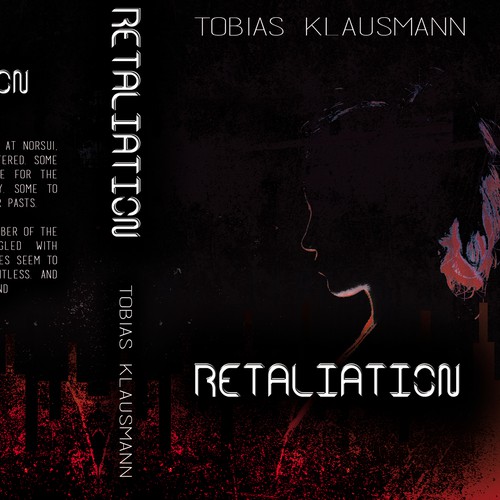 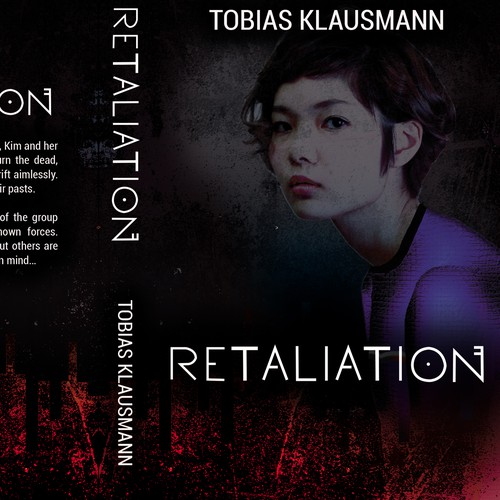 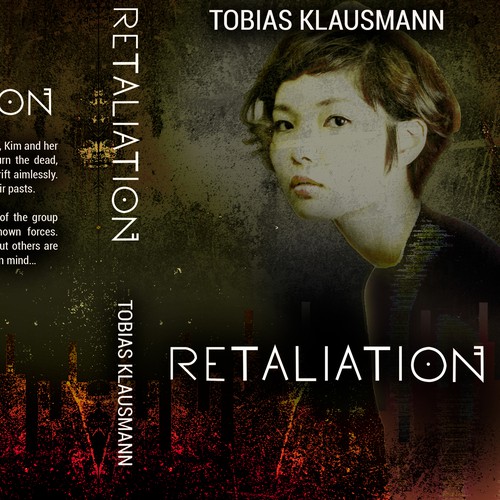 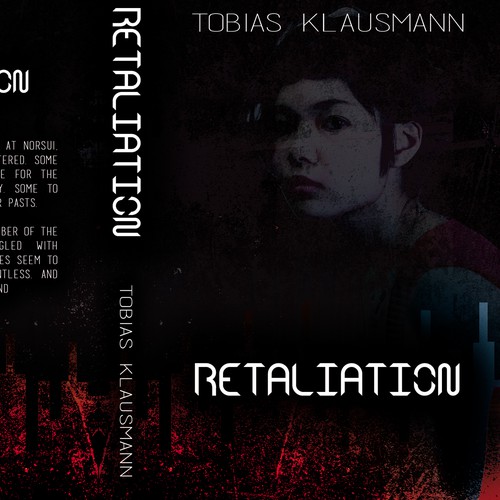 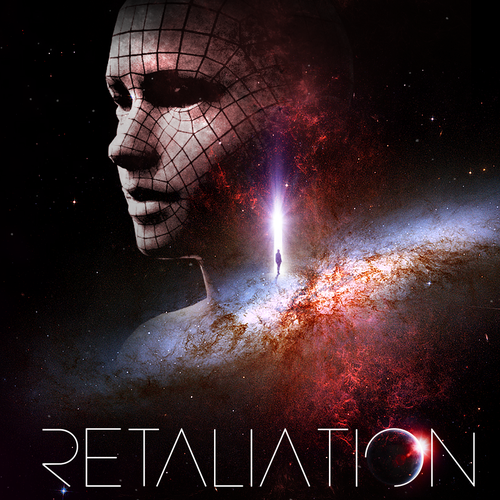 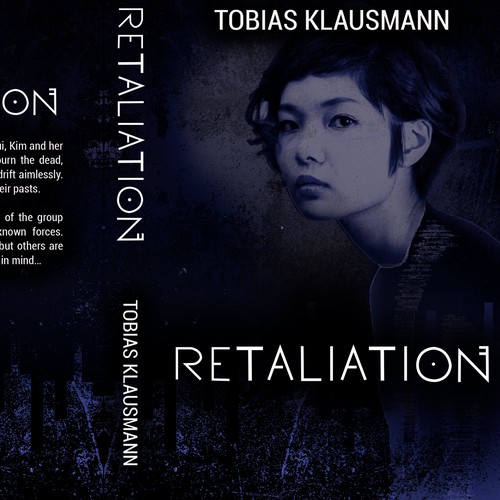 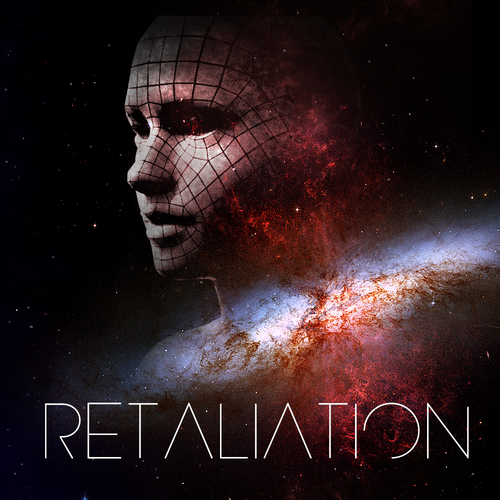 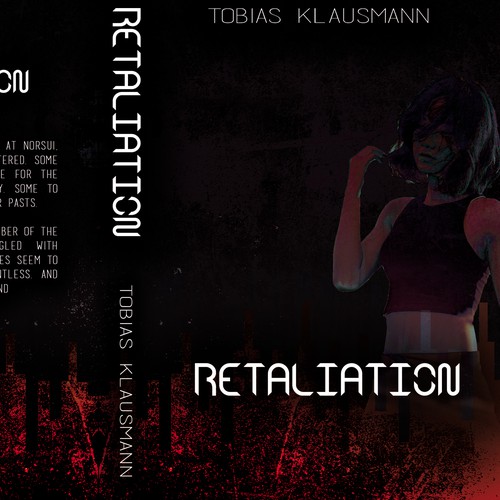 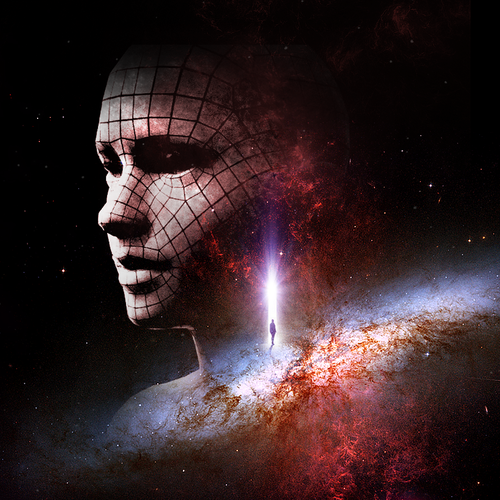 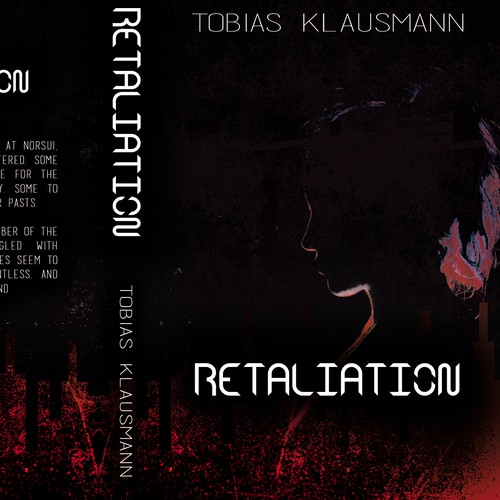 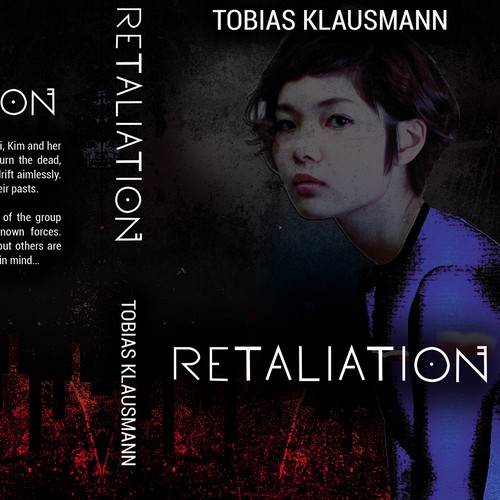 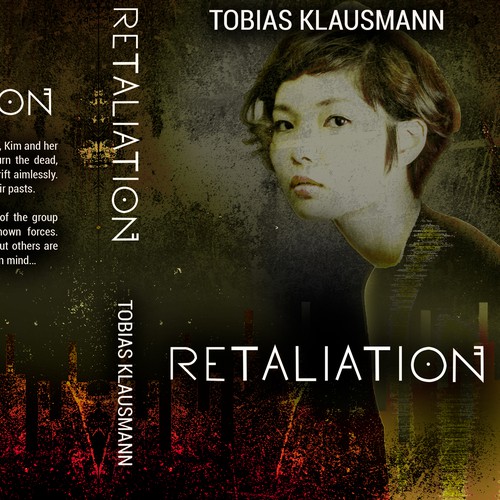 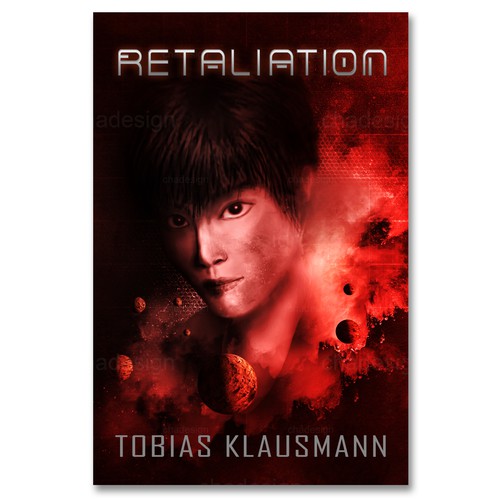 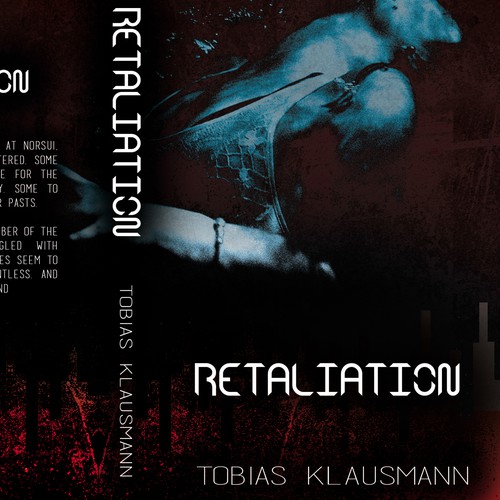 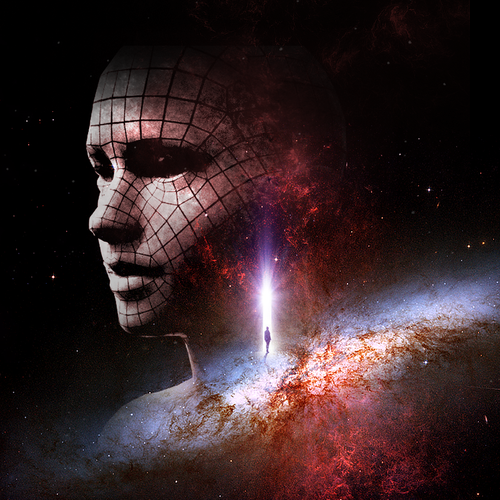 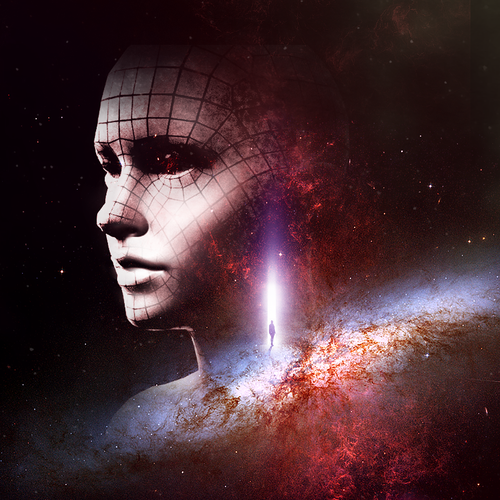 This is the second SF novel in the Slingshot series.

A book cover for a Science Fiction novel.

This will be published through CreateSpace (and as an ebook). Information on physical requirements is below at [2] (also has a link to templates).

This blurb should go on the back of the book:

After surviving the bloody battle at Norsui, Kim and her associates have scattered. Some to mourn the dead, some to care for the wounded, some to drift aimlessly. Some to confront the darkness in their pasts.

As they struggle onward, each member of the group suddenly becomes entangled with unknown forces. Some of the forces seem to be benign, but others are relentless. And they have retaliation in mind…
---snip---

The // bit means "set in italics and drop the slashes". Also, if you find a typo, please poke me about it.

Since this is the second book of a trilogy, I very much prefer a cover that is similar in style to the first one[1] (see URLs below) and that can be "extended" to the third. I also have a preference for artwork that can be blown up to poster size without too much loss in quality (e.g. mostly vector art).

One idea that I had (but which is not a requirement) is to have the first cover white-on-black monochrome, the second white-on-red and the last one black-on-white, but I'm very much open to suggestions. Typography should be similar to the first one but doesn't have to be a 100% match.

Update: Another idea I had is this: the silhouette of Kim, as she's about to walk out of a shuttle/down a ramp. Both Kim and the shuttle's interior are entirely in the dark. It's night (or dusk). What is detailed and possibly colorful is the cityscape outside the shuttle. We're talking a large city with light and skyscrapes (but a ways away, across a large shuttleport which is basically all flat). I've added a few images for the kind of cityscape I have in mind (though have *no* rights to use any of the imagery, so please don't use it c&p).

The novel is set ~150 years in the future, there is space travel, FTL ships and colonies on other planets.

I'd prefer no spaceships on the cover --- I deliberately avoid describing them. People are okay, but don't make them into eye candy; here's a description of the two main characters:

The main protagonist (Kim) is a woman in her 30s; she is of Japanese descent, has very short black hair and brown eyes. Her face is relatively narrow and a bit "bony". Her stature is slightly taller than average and similarly narrow; sinewy and taut.

The second main character is Allie, an AI. As such, there's not really a body, but she has a holo projection. There, she looks like a woman somwehere between late 30s and early 40s; The hologram doesn't really have much in the way of obvious character (i.e. it's not an attempt to display a human). The projection is monochrome but has not been set, feel free to choose one.

Comienza ahora
Adult Coloring Book Cover
$299
Product: Swear word coloring books for adults. Audience: Women, age 25-45, who wants to reduce stress and relax whil...
25
entries
13
designers
Create a Fun Book Cover based on Mock-up, for readers aged 9-12
US$499
Daniel's First Stand is a fictional account of a boy who opens his first lemonade stand. Aimed at kids 8-12 years old...
60
entries
9
designers
Design book cover for "The War-Bringer" by an Indie Author .
$499
I'm an independent author looking for a design for a book cover....
74
entries
11
designers
What would make you read this important book?
US$299
I am an author of young adult and middle grade fiction. Many of the books I write have justice oriented themes. The c...
87
entries
31
designers
Design a book cover for a contemporary lovestory in San Francisco
CHF 399
I'm writing romance novels as a selfpublishing author. My stories are published as amazon e-books, softcover and hard...
175
entries
35
designers
Eye-Catching Vampire Novel Cover
€279
The book is a Vampire Novel. The aiminggroup should be mainly females between 25-45....
169
entries
31
designers
Más información sobre diseño de portada de libro o revista
Vea como funciona