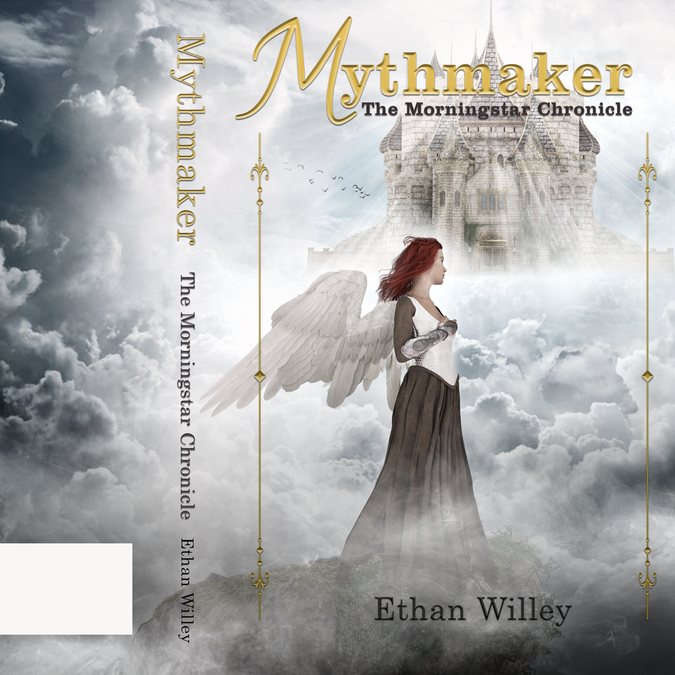 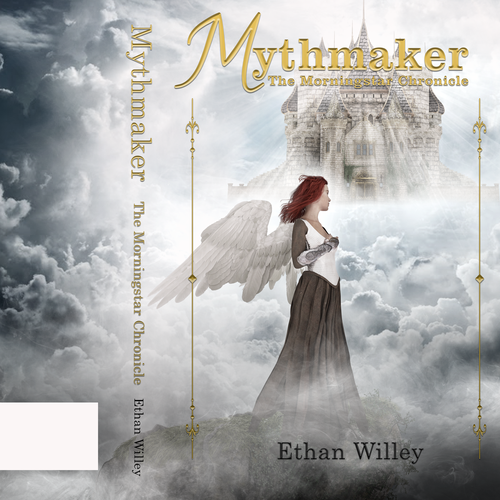 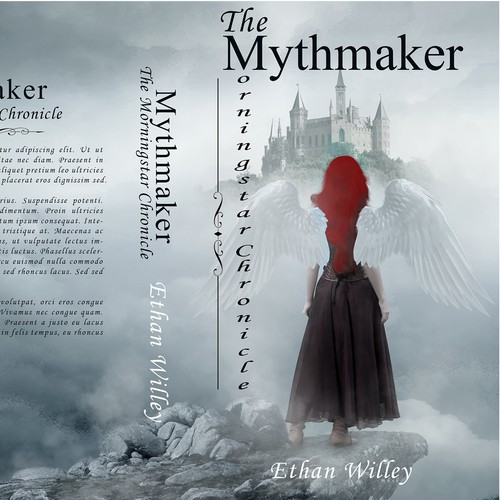 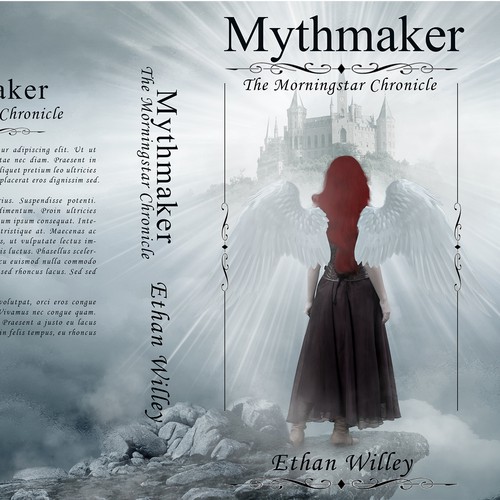 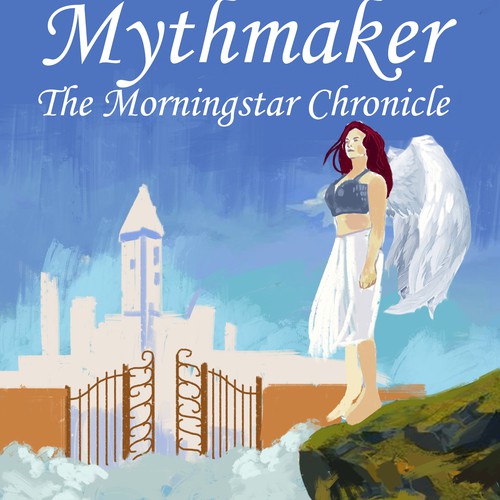 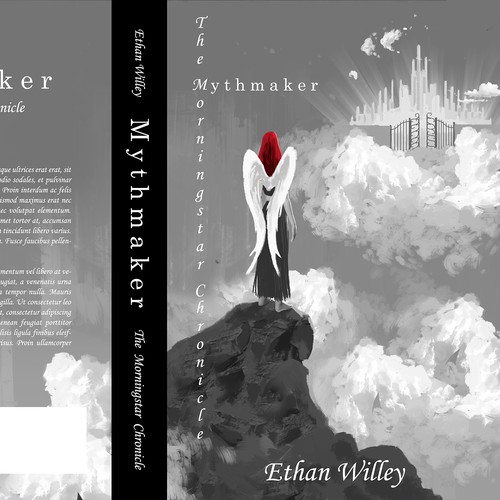 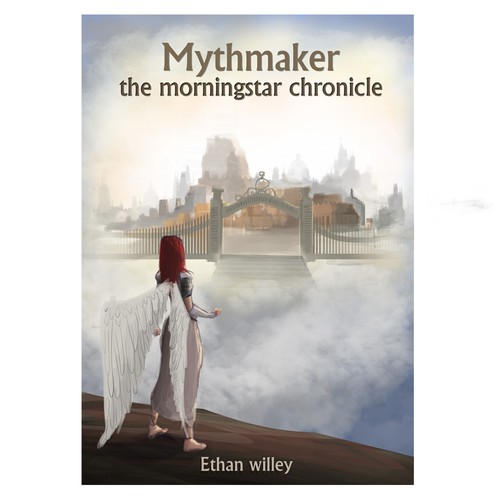 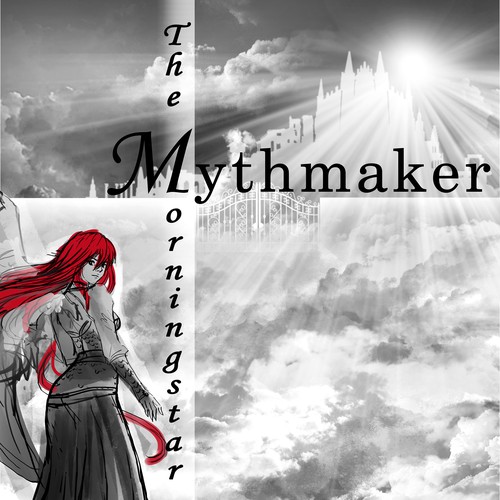 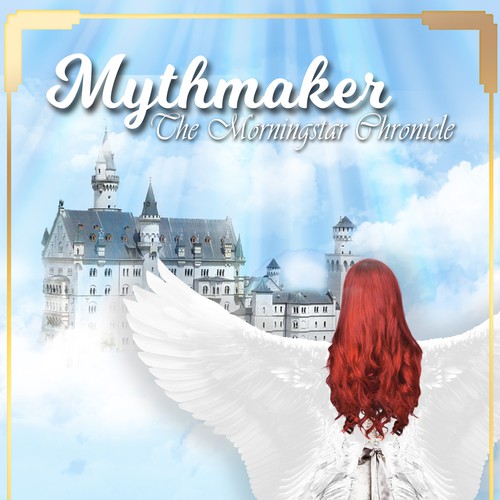 Using rule of thirds: a female angel standing on a hill with her head at the lower left intersection and her body down the vertical line, with her wings out, but tips pointed down behind her in "resting position". Attire would be a leather ankle-length battle skirt made of leather stips ~1.5 inches wide. And dragon scale mail for her upper half. Angle of the image should be 30-45 degrees to the right from directly behind her. At the upper right intersection should be the pearly gates, with the White City behind the walls with God's Palace prominently in the background, all of Heaven would be designed around and to accentuate the Palace and God's ego. Heaven can best be described as looming above her in the distance and imposing. The whole thing should be gray scale except her hair, which should be crimson. She's standing proudly and defiantly, ready to avenge her Mother and fix her Father's broken Creation, but the weight of the task of bringing war to Heaven should be the feeling the cover gives.

Along the left edge should be 'The Morningstar Chronicle' done vertically in Monotype Corsiva. Horizontal using that 'M', 'Mythmaker', in Century. I'm not sure if 'Mythmaker' should go right above the top horizontal line for rule of thirds, or closer to the top, but I would kind of like the title and subtitle to feel like half a cross.

Feel free to change the fonts if you don't think they play well with the image.

Comienza ahora
Business book cover needed, themed around phenix and unicorn.
499 $US
Young passionate enterpreneurs both male and female, aged between 18 - 40. Keen to build their own businesses. Target ge
161
entries
42
designer graphistes
eBook cover for a crime story
179 €
Any person who likes crime stories like The Godfather, The Departed, Breaking Bad, etc.
94
entries
20
diseñadores
We need a powerful book cover for a Science-Fiction novel
EUR 359
The target audience is between 25-45 years old, speaks French (France, Canada, Belgium, Switzerland), who likes Sc-Fi
67
entries
12
diseñadores
Creative Book Cover for a Female Dating and Relationships Title
199 $US
Women reading this book are usually younger and they’ve just been through a breakup. They don’t know how to collect the
150
entries
24
designer graphistes
Book cover for non-fiction
$ 199
156
entries
13
Designer
The Garden of Shadows and Bones
MXN 10.099
My books are geared towards New Adult. They are mainly about dark fantasy with witches and magic.
62
entries
24
diseñadores
Más información sobre diseño de portada de libro o revista
Vea como funciona