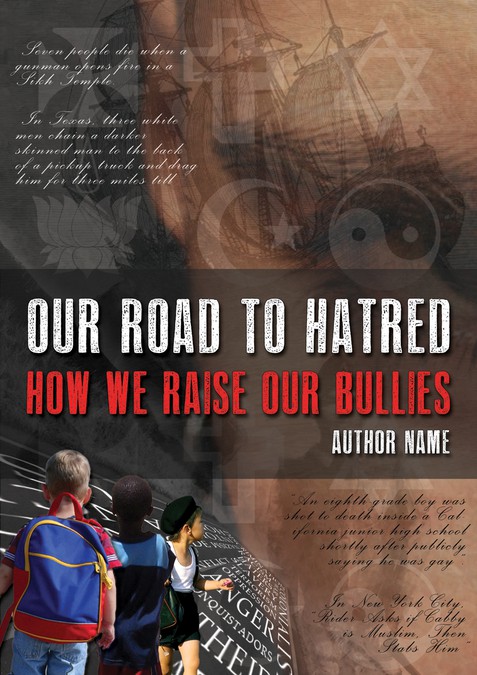 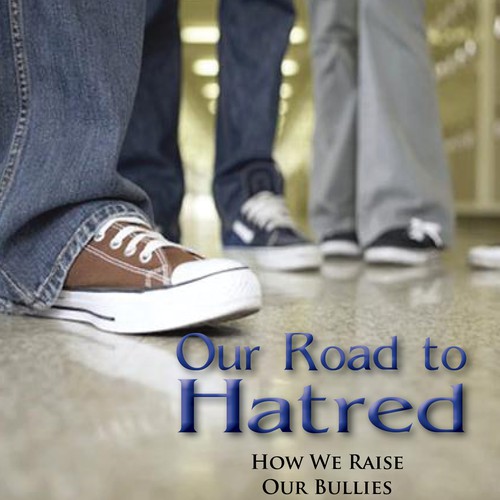 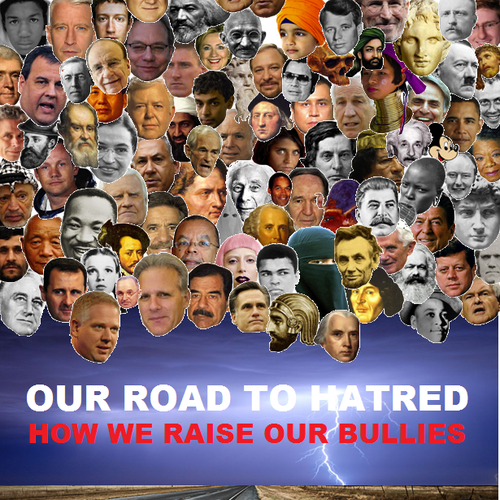 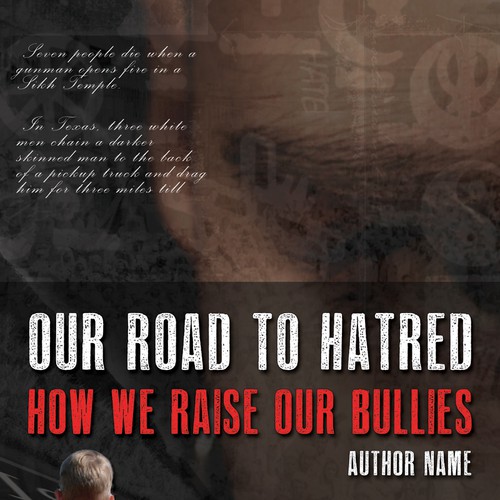 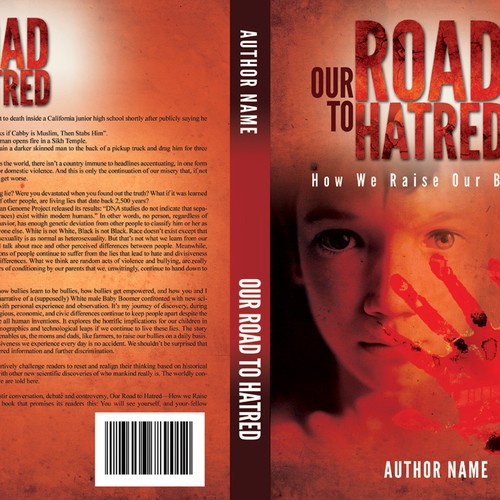 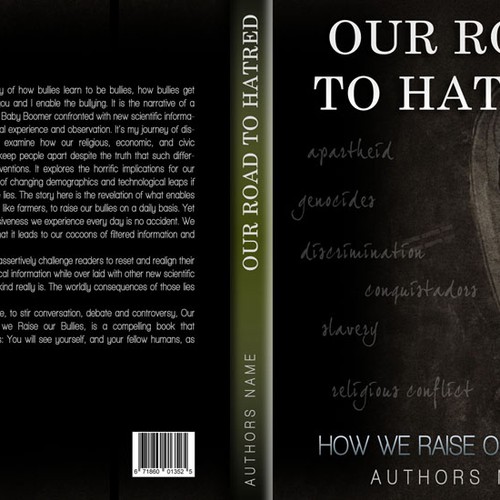 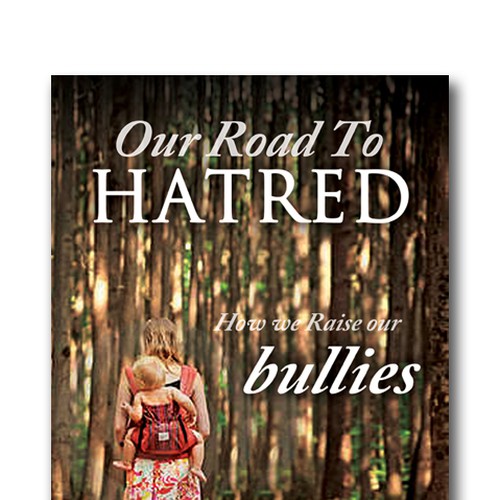 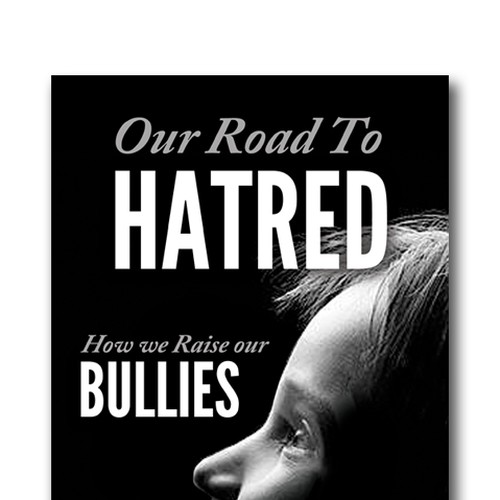 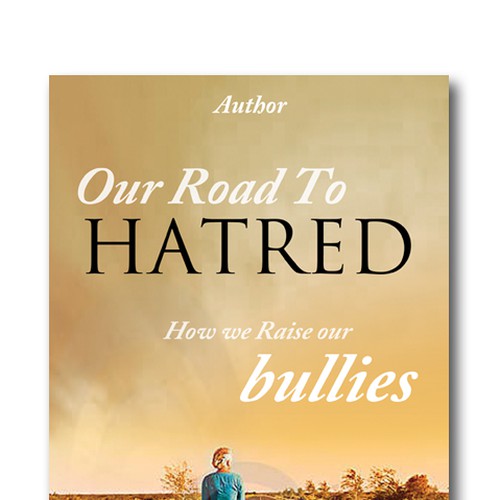 The objective here is to, currently, design a book cover and spine. The back cover and flaps are to be included in the contest but filled in at a later date. The Title of the book is "Our Road to Hatred--How We Raise Our Bullies" Author's name included.

The cover should evoke an emotion to compel a reader to be interested, There are many components that go into this book but the major theme accentuates how our hatred and license to bully started with certain religious tenets of divisiveness that have been handed down for the last 2500 years and continue in spite of the latest scientific discoveries to the contrary. Religious icons, famous genocides, leaders of government, discrimination, apartheid, slavery, Arab and other religious conflict, sexual behaviors, conquistadors etc can all be evoked to capture a reader's interest.

Synopsis---An eighth-grade boy was shot to death inside a California junior high school shortly after publicly saying he was gay.
In New York City, “Rider Asks if Cabby is Muslim, Then Stabs Him”.
Seven people die when a gunman opens fire in a Sikh Temple.
In Texas, three white men chain a darker skinned man to the back of a pickup truck and drag him for three miles till his death.
In the United States and across the world, there isn’t a country immune to headlines accentuating, in one form or another, hatred, bullying, or domestic violence. And this is only the continuation of our misery that, if not given our attention, will only get worse.
Has anyone ever told you a big lie? Were you devastated when you found out the truth? What if it was learned that you and I, and millions of other people, are living lies that date back 2,500 years?
Some ten years ago, the Human Genome Project released its results: “DNA studies do not indicate that separate classifiable subspecies (races) exist within modern humans.” In other words, no person, regardless of skin color, appearance, or behavior, has enough genetic deviation from other people to classify him or her as genetically different from anyone else. White is not White, Black is not Black. Race doesn’t exist except that it’s trapped in lies, and homosexuality is as normal as heterosexuality. But that’s not what we learn from our parents and teachers. We still talk about race and other perceived differences between people. Meanwhile, untold millions, perhaps billions of people continue to suffer from the lies that lead to hate and divisiveness based on wholly imaginary differences. What we think are random acts of violence and bullying, are really the result of thousands of years of conditioning by our parents that we, unwittingly, continue to hand down to our children!
This is the startling story of how bullies learn to be bullies, how bullies get empowered, and how you and I enable the bullying. It is the narrative of a (supposedly) White male Baby Boomer confronted with new scientific information overlaid with personal experience and observation. It’s my journey of discovery, during which I examine how our religious, economic, and civic differences continue to keep people apart despite the truth that such differences are all human inventions. It explores the horrific implications for our children in this new age of changing demographics and technological leaps if we continue to live these lies. The story here is the revelation of what enables us, the moms and dads, like farmers, to raise our bullies on a daily basis. Yet this polarization and divisiveness we experience every day is no accident. We shouldn’t be surprised that it leads to our cocoons of filtered information and further discrimination.
Our Road to Hatred will assertively challenge readers to reset and realign their thinking based on historical information while over laid with other new scientific discoveries of who mankind really is. The worldly consequences of those lies we live are told here.
Certain to be provocative, to stir conversation, debate and controversy, Our Road to Hatred—How we Raise our Bullies, is a compelling book that promises its readers this: You will see yourself, and your fellow humans, as never before.

Design a book cover for Prison of Outcasts, a fantasy novel
US$299
Ages 12+
115
entries
22
designers
Design a book cover to motivate a beginner to fitness & weight loss
£ 159
Male and female, total beginner to fitness and weight loss or people that may be looking for motivation and advice to he
67
entries
17
Designer
Amazon Kindle How to Guide needs a captivating Cover!
US$199
Anyone wanting to write, or pay someone to write, their own book and self-publish online. Ages 15-45. All genders. Any l
46
entries
11
designers
Human Behavior: The Psychology Behind Why We Smile, Strive, and Sing
$499
readers 12-16
144
entries
22
designers
WANTED: a beautiful utopian book cover that masks a sinister story world
$ 399
Ages 15-30. 75% are female.
88
entries
31
Designer
Design the cover of the first ever REAL autobiography by a REAL dog!
US$299
Millennials, BabyBoomers, Parents and middle age readers, 7 to 12.
108
entries
21
designers

Comienza ahora
Design book cover for nonfiction Children's book (for a nonprofit)/Social-Emotional Learning
799 US$
This book is for children 2-7 with the guidance of parents, teachers, counselors who focus on social-emotional readiness
138
entries
15
diseñadores
Design a stand-out Book cover for 'Remember Who You Are'
AU$ 399
Remember Who You Are is for those who have been getting this niggling feeling that there is more to life. It's for those
96
entries
22
Designer
Create a compelling cover design for Success Visionaries.
US$ 299
Anyone, male or female, not age specific, who have visions and aspirations to be accomplished and successful at somethin
75
entries
23
designers
Create a award winning book cover
US$399
Men between the age of 25 to 40
120
entries
32
designers
ALL IN SKIN COVER CONTEST!
US$299
Those who are struggling with healing Eczema, Psoriasis, Cystic Acne and other skin ailments that need a dose of motivat
88
entries
25
designers
Book Cover for Awesome YA Zombie/Beauty Pageant Crossover!
US$399
Females, aged 13-35, living in the US.
22
entries
9
designers
Más información sobre diseño de portada de libro o revista
Vea como funciona