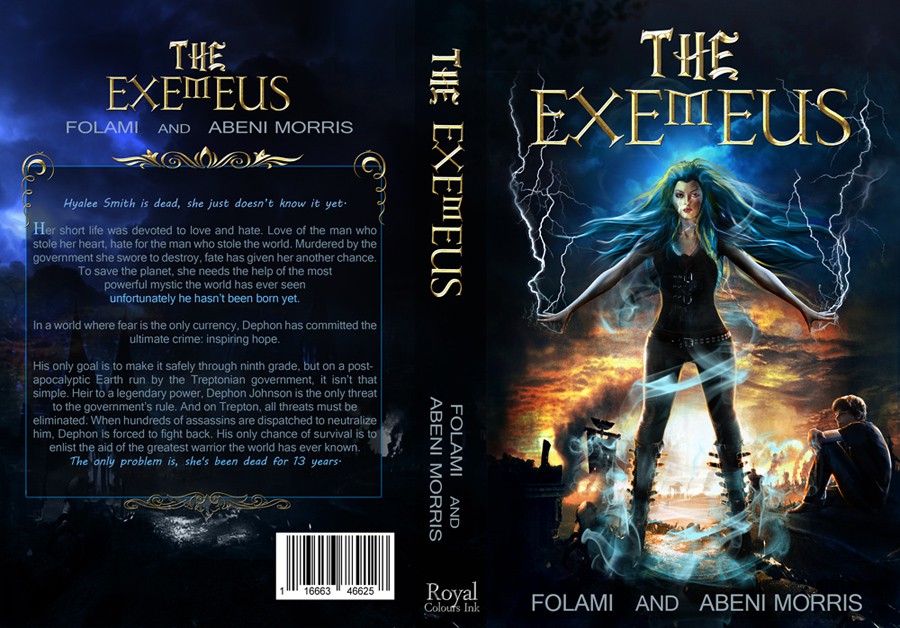 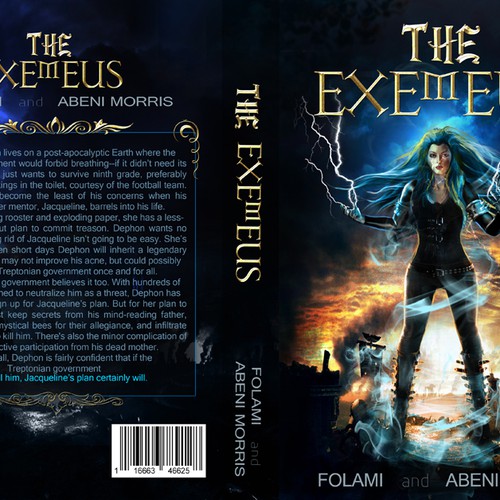 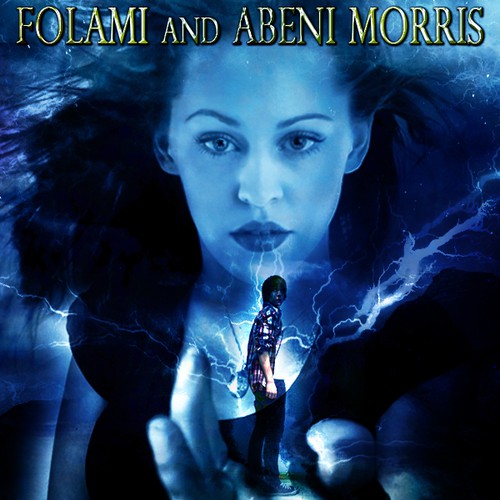 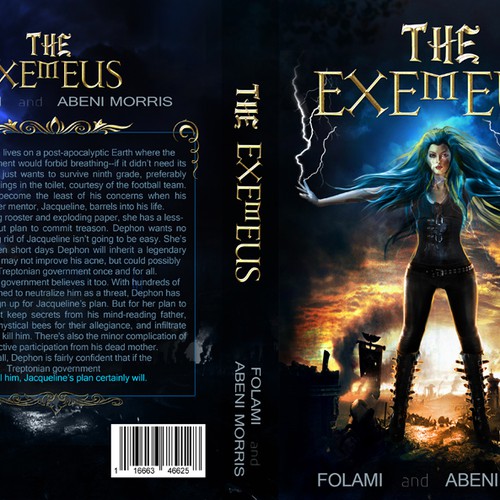 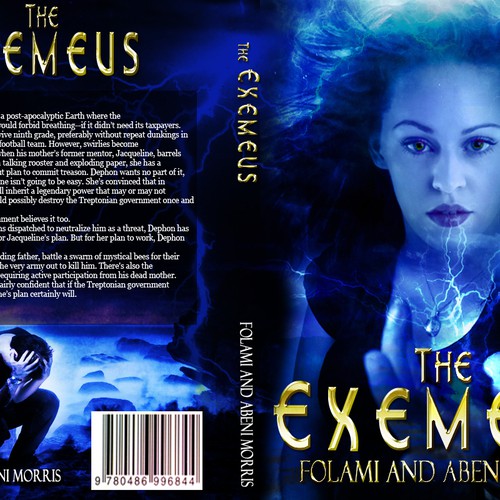 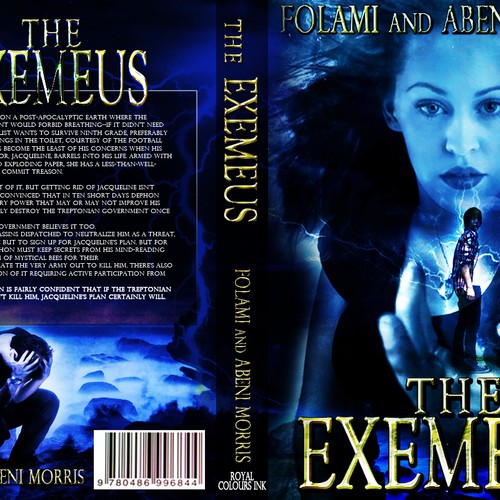 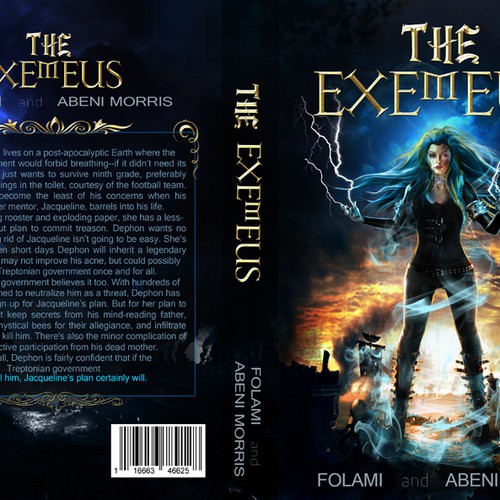 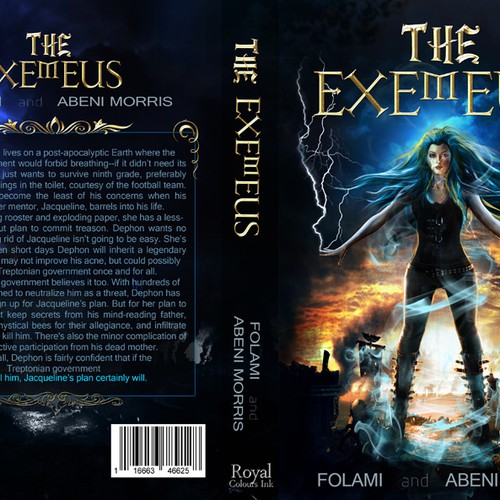 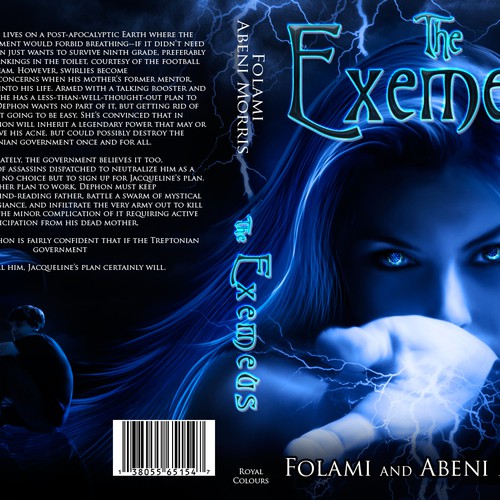 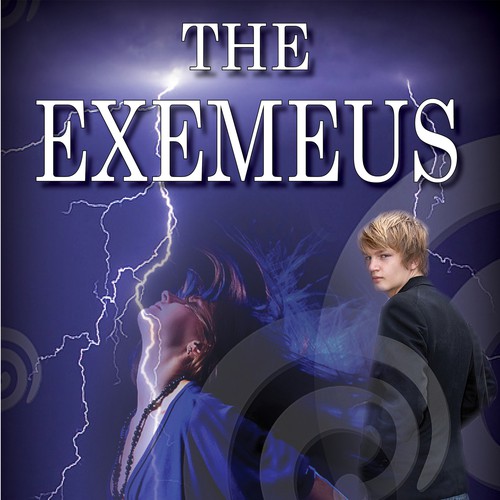 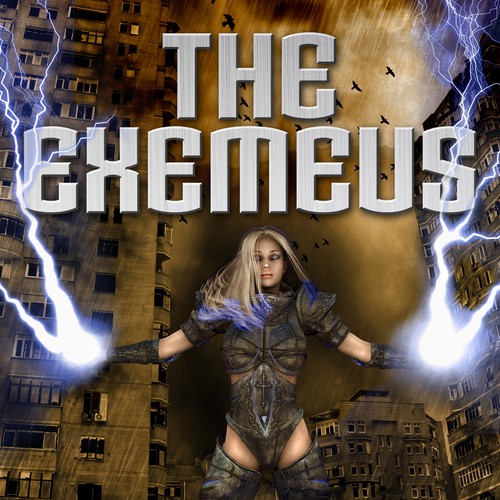 A 6 by 9 book cover with an appropriate spine for 335pgs that can be uploaded into Amazon, lightning source, and kindle. The Title: The Exemeus should be prominently displayed and at the bottom the author's names Folami and Abeni Morris.On the spine it should say Royal Colours Ink, horizontally and the title and author's name vertically.

I have a number of possible ideas for the cover. Idea one is pretty much a snap shot of a war.
Idea 1
A 24 year old beautiful woman (think a younger Charlize theron in Hancock -clearly not her, but that is my idea of beauty) her arms outstretched, her irises are multicolored, perfectly sectioned kaleidoscopes. Her hair is either a vibrant blue or blonde with blue tips, but its billowing behind her like she's standing in a wind tunnel. Lightning flashes ( it could be from her eyes, from her finger tips of in the air). She looks powerful and sure of herself and unstoppable.Her clothes should be powerful as well feel free to play with leather, boots, the color blue

Staring up at her is a 14-year old blond-haired, hazel eyed boy who looks up at her shocked and out of place (on the periphary)

Things you can include or not include and feel free to play with
The setting of this is a war, right before she is killed so she can be
- facing an opponent (blonde haired, really attractive, cocky smile with dimples and cloaked in green) although most of his face would be shrouded in a fog.
- have a man on one side hurtling boulders, but he too would be shrouded in fog so his face wouldn't be visible
- it could possibly be raining
- Storm clouds could be overhead or just over the woman's head
- The woman could be slightly transparent
- the opponent could be turning a boulder into sand
- Dead bodies could be littering the ground
- the woman could have one hand outstretched with her hand twisting and her fingers flourished and outstretched upwards and blue bees could be hovering above her fingertips
-The scenery is whatever you want it to be

Idea #2
The setting is a 14 yr old boys bedroom. Sports are outlawed so no sports items. The room can possibly have a shelf and definitely a bed and most of the room is shrouded in a darkness , but you can still see the outlines of the bed and the bookcase.

A book could lay open on the floor(or bed) and a BEAUTIFUL 17 year old girl (think a much younger charlize theron) could be rising out of it, she would be more than 3/4 out of the book if not all the way with just her black boot bottoms still in the book. She would look powerful and sure of herself with kaleidoscope eyes and blonde hair with blue tips.Her hair is all blown backwards off of her shoulder like she is in a wind tunnel. The area around her coming up from the book is lit up in a blue light with the shape of ab upside down bull horn- branching up and outwards from the book.

Lightning flashes through the room or through the light from the book, a cloud is either high above just her head or through out the room, but the rain that pours down only pours on her although she stays dry. She's wearing apowerful outfit leather jacket opened over something blue with blue jeans tucked into knee high black boots. Her feet is parted and her stance is confident.

A dirty blonde haired boy with hazel eyes is staring up at her in shock. He can either be standing looking UP AT her. Or he could be on his bottom on the floor leaning back on his elnows after falling over staring up at her in shock. A small african american fairy with caramel color skin and brown and black curly hair (think Rue from the hunger games, but with brown streaks in her hair- not exactly her of course, but that is the image) she has green wings and is wearing a purple dress with an amber necklace ( that might no be that visible, since she is smaller) and she is flitting around the boys shoulder.

possible creative pieces.
-the room doesn't have to be dark and the setting can be played with
- the wall can be replaced with a huge rising wave as the back drop

areas of freedom for both

the back is free space for creative ideas based off of anything I just said or
-it could just be a color that is identical to the background of the cover
-the back could literally be what the back of the image would be if viewed from behind the characters, but it must be faint so the text can go over it.
-or it could have a beautiful 32 year old African American woman with braids holding a rooster with an all knowing smile on her face in a corner

-or a massive dilapidated house spanning the top

-or a rising wave as the back

The story is a young adult fantasy novel intended for ppl ages 13 and up the blurb on the back will read:

Dephon Johnson lives on a post-apocalyptic Earth where the
Treptonian government would forbid breathing--if it didn’t need its taxpayers.
Dephon just wants to survive ninth grade, preferably without repeat dunkings in
the toilet, courtesy of the football team. However, swirlies become
the least of his concerns when his mother’s former mentor, Jacqueline, barrels
into his life. Armed with a talking rooster and exploding paper, she has a
less-than-well-thought-out plan to commit treason. Dephon wants no part of it,
but getting rid of Jacqueline isn’t going to be easy. She’s convinced that in
ten short days Dephon will inherit a legendary power that may or may not
improve his acne, but could possibly destroy the Treptonian government once and
for all.
Unfortunately, the government believes it too.
With hundreds of assassins dispatched to neutralize him as a threat, Dephon has
no choice but to sign up for Jacqueline’s plan. But for her plan to work, Dephon must keep
secrets from his mind-reading father, battle a swarm of mystical bees for their
allegiance, and infiltrate the very army out to kill him. There's also the
minor complication of it requiring active participation from his dead mother.
Yep, all in all, Dephon is fairly confident that if the Treptonian government
doesn’t kill him, Jacqueline’s plan certainly will.

New book or magazine cover wanted for Priorities of Life
USD 299
Produce the Priorities of Life one-page chart, in use professionally for 29 years, but is just going out for public…
98
entries
5
diseñadores
Create the next book or magazine cover for Troll River Publications
USD 299
We Cherish Our Authors. We Love Our Readers.
169
entries
21
designer
Create a baby health/wellness book cover about vitamin D
USD 499
Health/Wellness Books for retail. The target audience for this book is pregnant women and new moms, as will as healt...
281
entries
35
designers
Wholesale Sourcing Book Cover
$299
We teach eCommerce business owners how to grow their businesses....
161
entries
27
designers
"The Tripping Point In Leadership" Book Cover
CA$ 334
Our company is a full service publishing company. We produce, market and sell fiction and non-fiction books to the ma...
178
entries
35
designers
The Wizards of Real Estate
CAD 299
Write and publish high-end books. Target for this one will be real estate agents....
91
entries
15
diseñadores

Comienza ahora
Connecting In The New World - Book Cover Contest
CAD 334
The Secret Art Of Creating Expertise In Your Chosen Field
183
entries
38
diseñadores
Create an Intelligent Design/Evolution-inspired trade book cover!
US$ 299
BenBella Books is a boutique publisher focused on niche market, non-fiction titles. This particular book cover needs ...
52
entries
14
designers
Design The TANNER Series of novels
299 US$
We publish books and are looking for a new book covers for a series of books...
24
entries
10
diseñadores
Create a book cover that will help people avoid heart attacks and cancer
$299
Professional speaker on health....
55
entries
13
designers
Fractured Karma
US$299
I am the author of a suspenseful/thriller book which requires a cover....
172
entries
25
designers
The Altruism Effect: A Thriller Novel
USD 299
In need of a print and ebook cover design for a thriller novel.
141
entries
39
diseñadores
Más información sobre diseño de portada de libro o revista
Vea como funciona