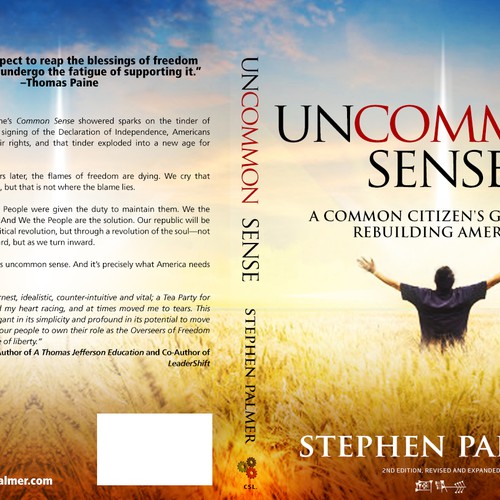 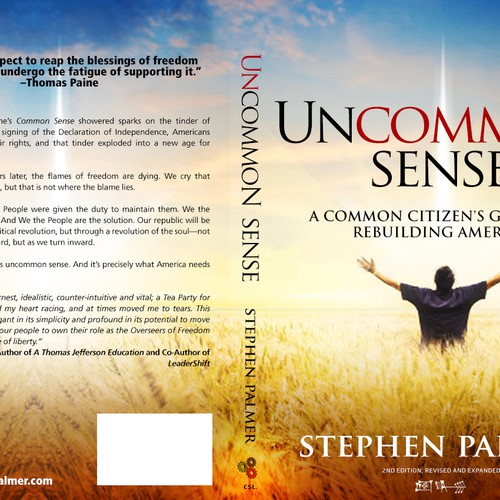 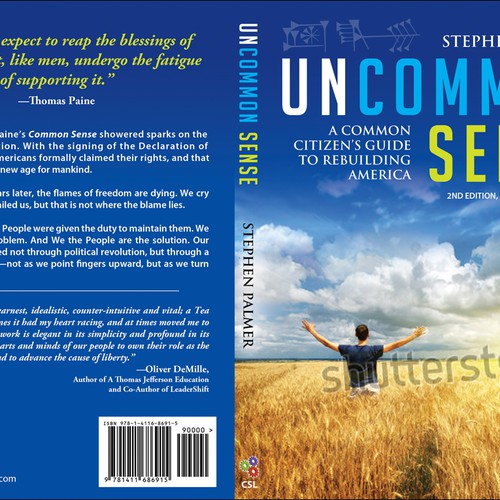 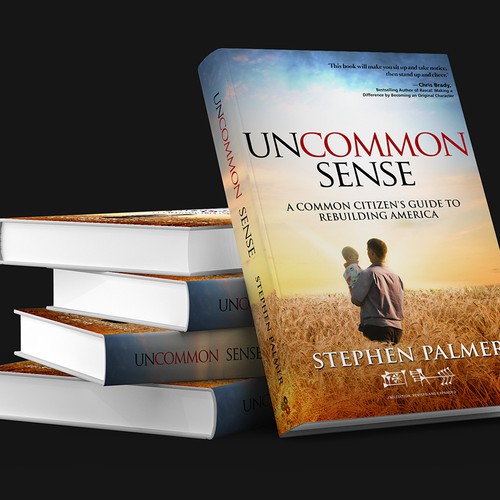 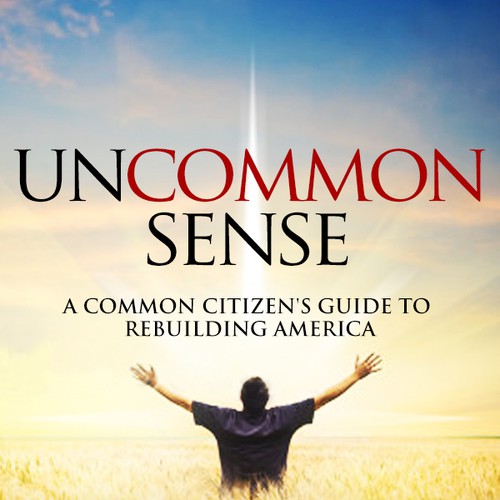 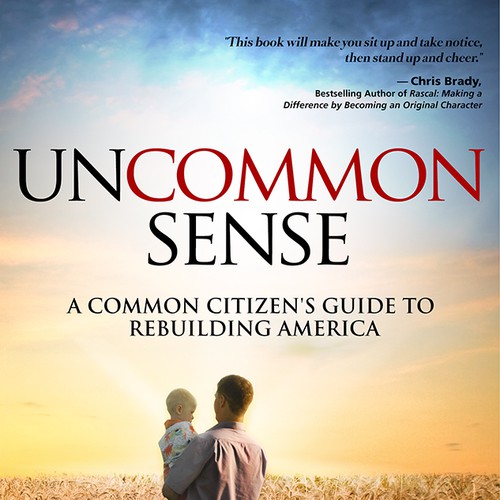 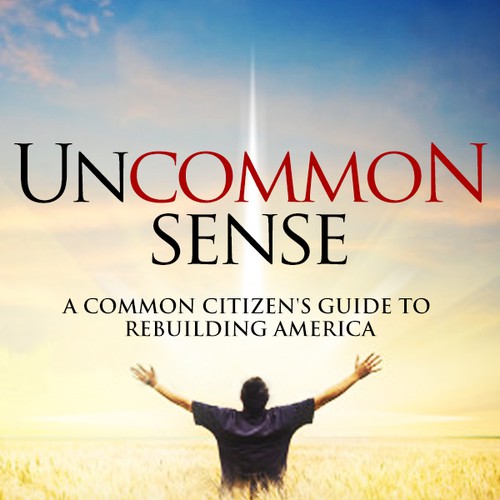 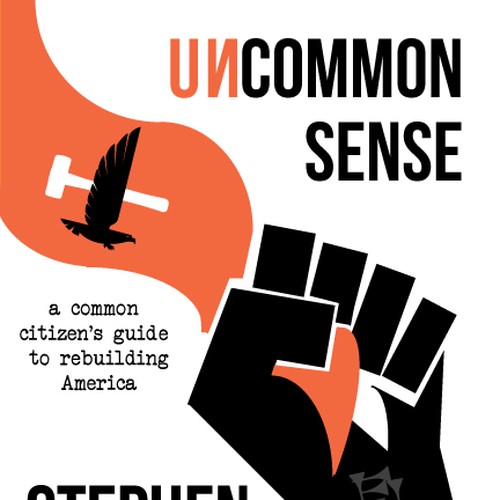 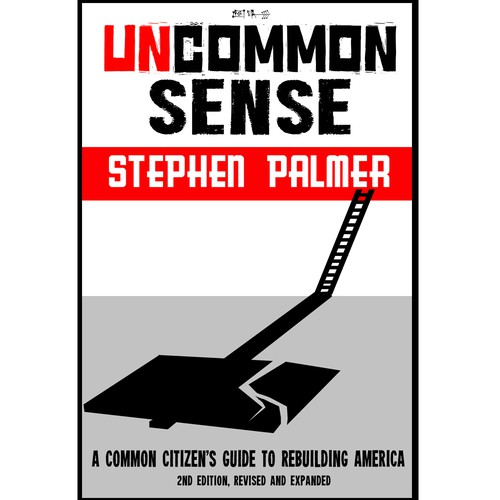 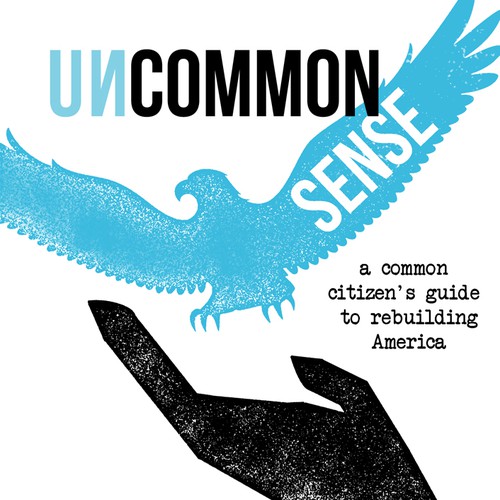 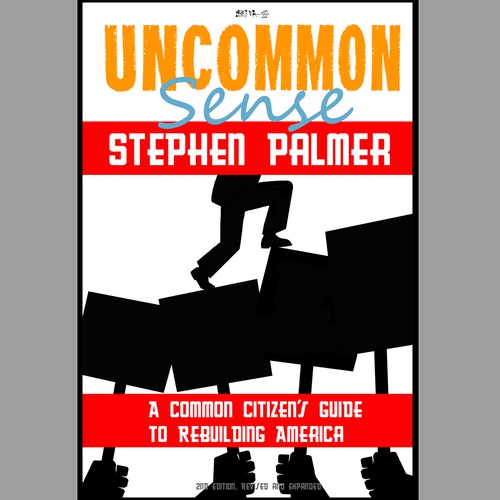 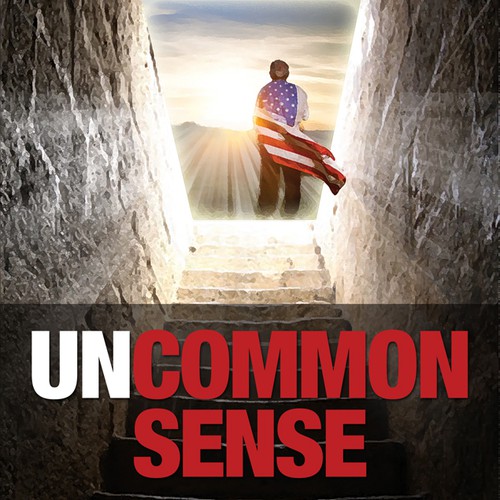 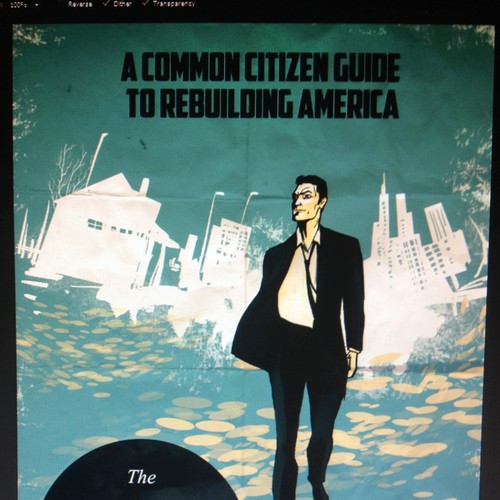 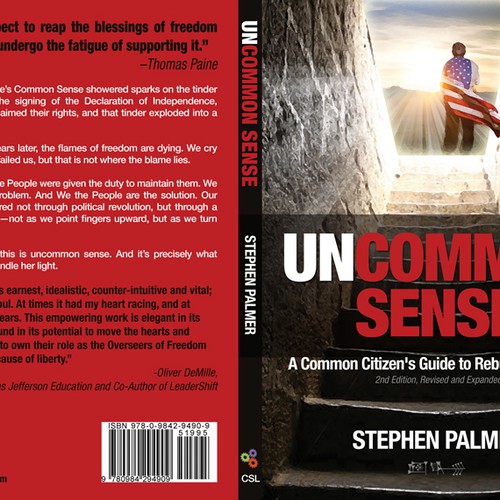 My book inspires American citizens to make a difference in protecting and promoting freedom.

This cover design is for a book that I have already published. I am wanting to publish a second revised and expanded edition with a completely new cover.

You can see the first version here: http://stephendpalmer.com/uncommon-sense-book/

That first version was published on an extremely tight budget.

I do NOT want you to copy that design. You have a clean slate. Start from scratch and do what speaks to you based on my description.

I only gave you the link to the book so that you could understand the content, what the book is about.

The first edition was a paperback. This new edition will be a hardcover with a dust jacket (with interior flaps).

The front cover should somehow integrate the "Amagi" symbol that you see on the front cover of the first version (just below my name) and on the top right of my blog header. It doesn't have to be a significant component of the design. It can be subtle, just has to be on there somehow because it's part of my "personal brand." (Click on the symbol on the top right header my blog and you'll see why.) I've attached the largest file of the Amagi symbol I could find.

Even though the content is about rebuilding America and restoring freedom, I don't want this to look cliché patriotic. In other words, don't give me a predictable red, white, and blue cover with an American flag.

I also don't want it to look partisan or conservative, as my views are very independent.

It also doesn't need to match the design of my blog.

I want the design to be fresh and modern while also communicating timelessness.

One thought is something symbolic of the common man rising up and making a difference.

Other than that, I'll leave the design up to you.

I have attached a document with explicit instructions for the dust jacket design.

I've also included them here, but make sure you look at the document to catch nuances like italics, etc.

(Note that I will be removing the middle initial "D" that you see on the first version.)

2nd Edition, Revised and Expanded
(should be really small and at the bottom)

“Those who expect to reap the blessings of freedom must, like men, undergo the fatigue of supporting it.” –Thomas Paine

(Use a drop cap on the following description text.)

In 1776, Thomas Paine’s Common Sense showered sparks on the tinder of revolution. With the signing of the Declaration of Independence, Americans formally claimed their rights, and that tinder exploded into a new age for mankind.

But more than 200 years later, the flames of freedom are dying. We cry that Washington has failed us, but that is not where the blame lies.

In an age of blame, this is uncommon sense. And it’s precisely what America needs to rekindle her light.

“Uncommon Sense is earnest, idealistic, counter-intuitive and vital; a Tea Party for the soul. At times it had my heart racing, and at times moved me to tears. This empowering work is elegant in its simplicity and profound in its potential to move the hearts and minds of our people to own their role as the Overseers of Freedom and to advance the cause of liberty.” -Oliver DeMille, Author of A Thomas Jefferson Education and Co-Author of LeaderShift

(Also include space for bar code with ISBN number.)

Content:
Founded by Stephen Palmer and Oliver DeMille, the Center for Social Leadership is a think tank and action organization dedicated to building social leaders for the 21st Century. We empower ordinary citizens to make an extraordinary difference.

We offer products, classes, and personal mentoring to help you conquer limitations, unleash your genius, and lead with courage and power.

Traditional leadership is broken. Conventional human organization based on hierarchies and authority is outdated. Human consciousness is evolving. Technology has transformed the way we interact and enhanced our ability to have impact.

We created CSL to steer these changes to heal society, preserve freedom, and ensure peace and prosperity for humanity.

A new vision of leadership is needed. Not the old, hierarchical, positional, authoritative, privileged-elite leadership, but a new democratic, action-determined, service-oriented leadership. Through this social leadership, mankind can achieve unprecedented happiness and fulfillment.

(Should also include the CSL logo, which I've attached.)

INSIDE BACK (RIGHT) FLAP:

Stephen Palmer is a writer and entrepreneur devoted to helping people conquer limitations, maximize their potential, and achieve true freedom.

He is a co-founder of the Center for Social Leadership and the founder of Life Manifestos (http://www.LifeManifestos.com).

A liberal arts graduate and political independent, Stephen is dedicated to moving the cause of liberty worldwide.

Stephen and his wife, Karina, are raising their four children in southern Utah. When he's not writing or spending time with his family, you’ll find him reading, canyoneering in Zion National Park, gardening, or playing basketball.

(Also include the picture of me, which I've attached.)

(At the bottom of the spine, also include the three gears from the CSL logo, which I've attached. Just below those, put "CSL.")

Comienza ahora
Book Cover Design book on Emergency Work From Home in a Pandemic
269 CA$
Leaders in small and medium sized business plus leaders of organizations that need to support remote work and Emergency
172
entries
26
designer
34 Kings and a Budgerigar Book Cover Contest
£ 399
See cover brief
44
entries
23
designer
Design the cover of a book about the healing power of God
US$ 399
Christians who are tired of being sick and want to receive the healing power of God.
43
entries
19
designers
Create a nonfiction/fiction book cover with the potential for follow-up paid projects
299 US$
Young adults, between 18 - 35, female
203
entries
33
designers
Captivating book cover to inspire hope in the world, and the power of positivity!!
1 599 $CA
Adults in the self- help category, those facing cancer, those who are care givers, anyone who wants to up-level their li
462
entries
82
designer graphistes
Minimalist ebook design to appeal to teenagers
199 $
Teenagers or people in their 20s is my target audience. Since this is a self help book on the preparation of adulthood,
216
entries
63
Designer
Más información sobre diseño de portada de libro o revista
Vea como funciona