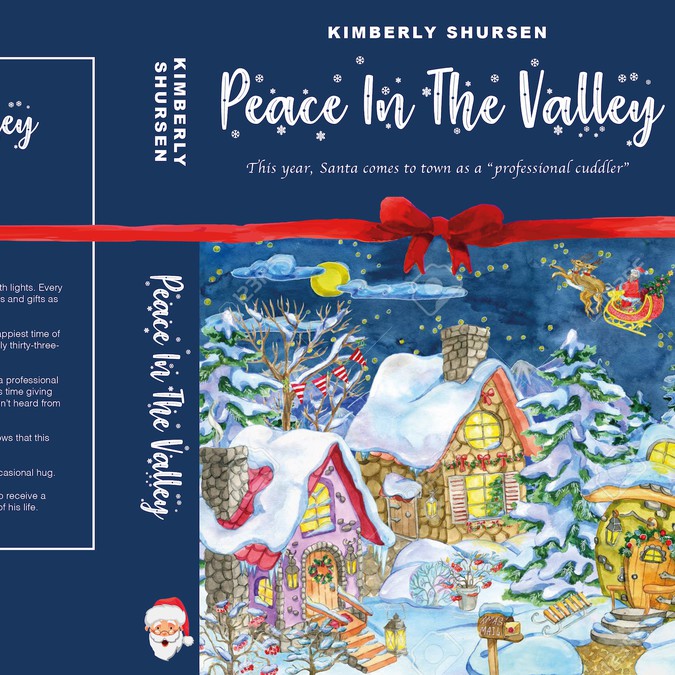 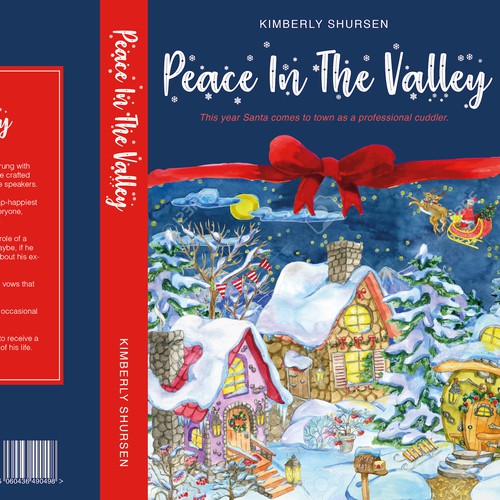 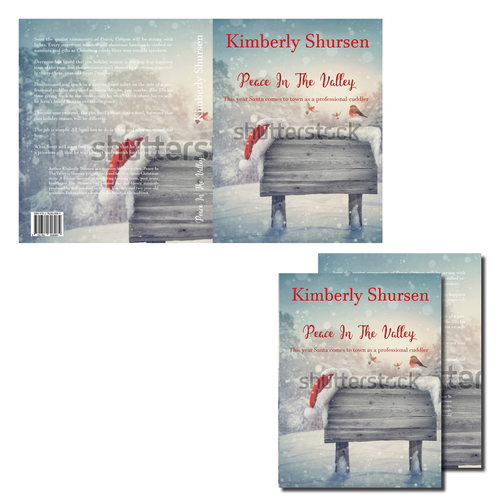 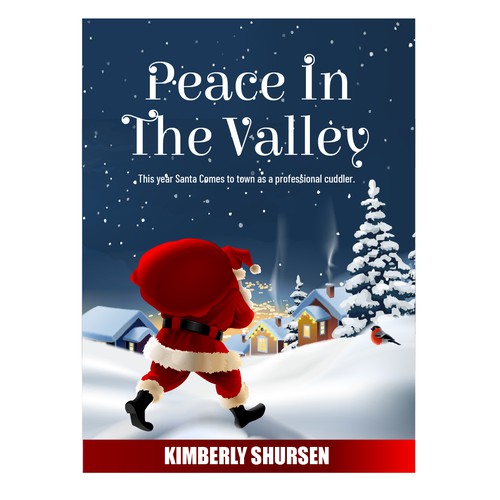 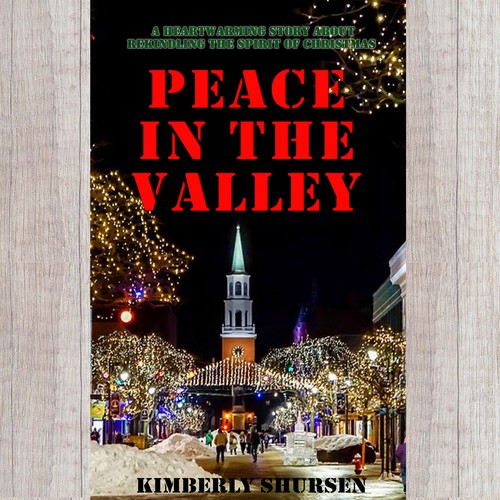 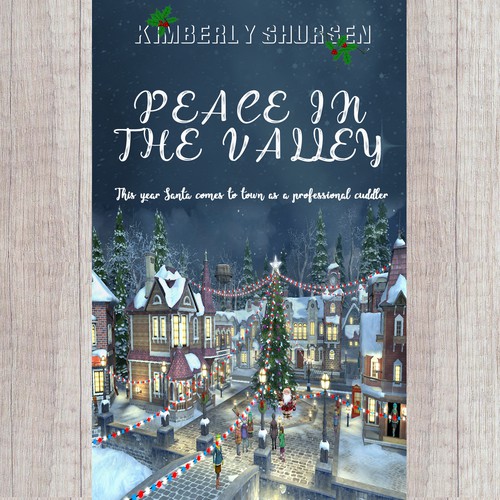 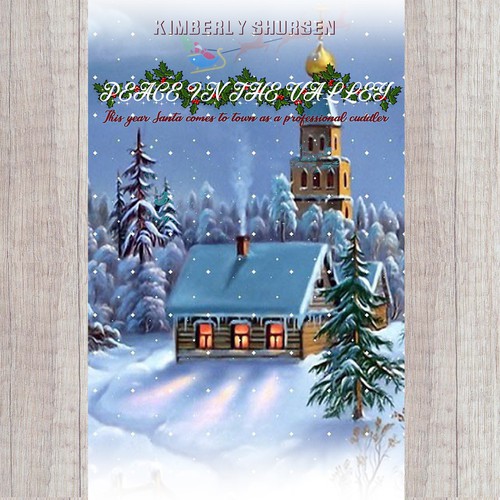 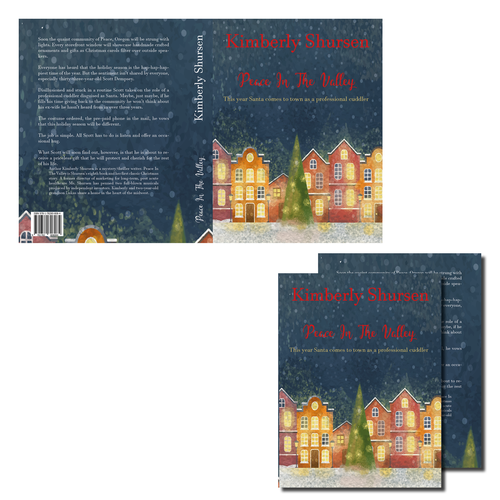 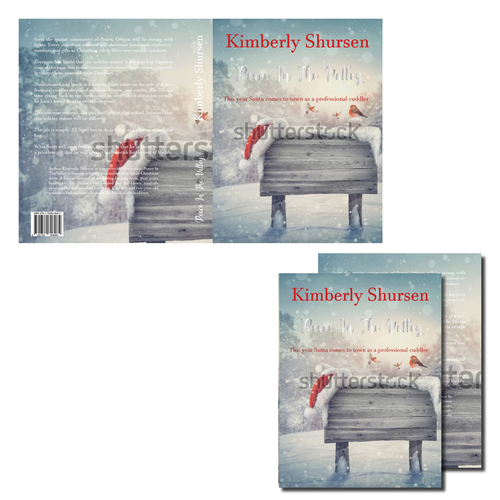 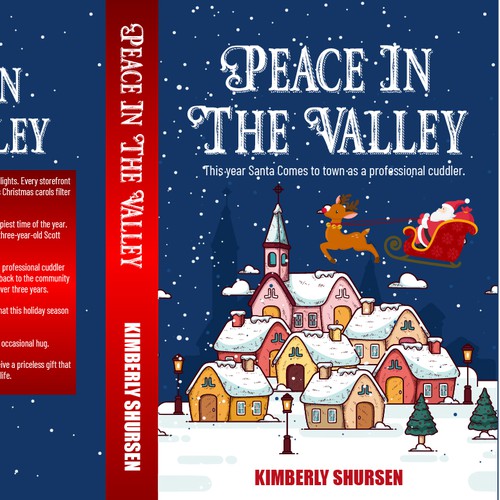 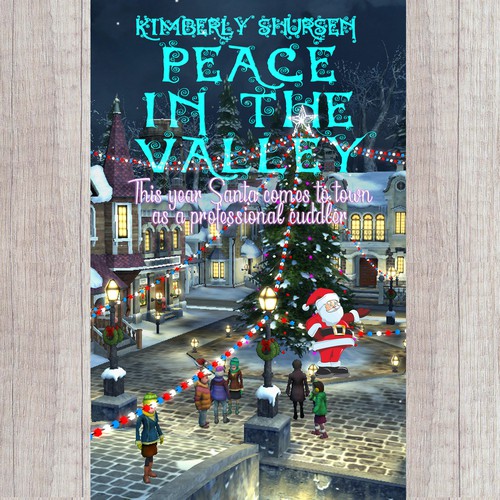 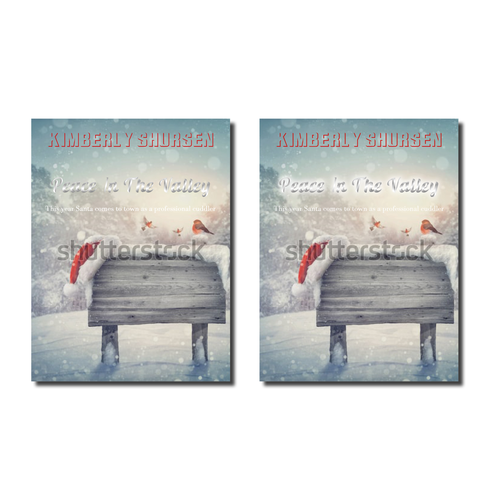 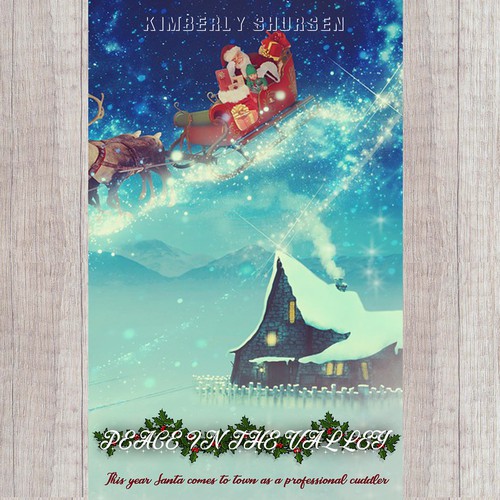 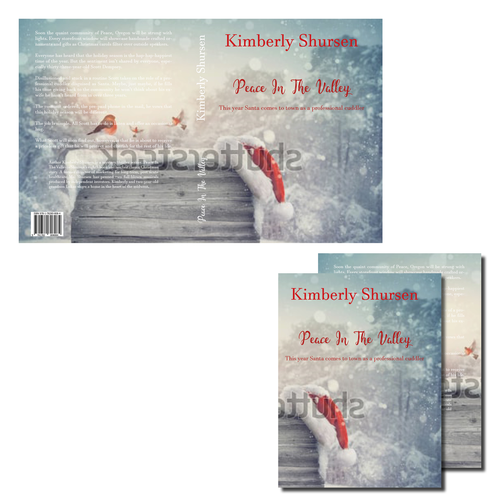 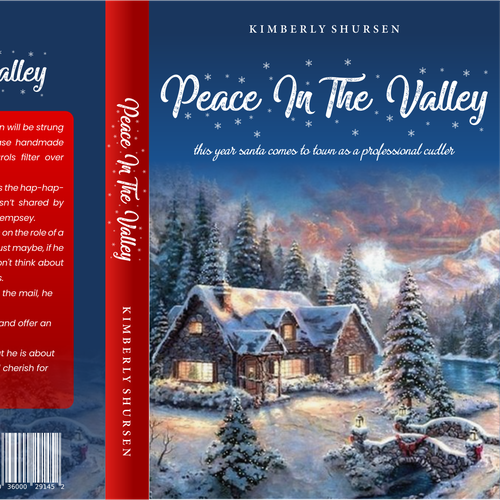 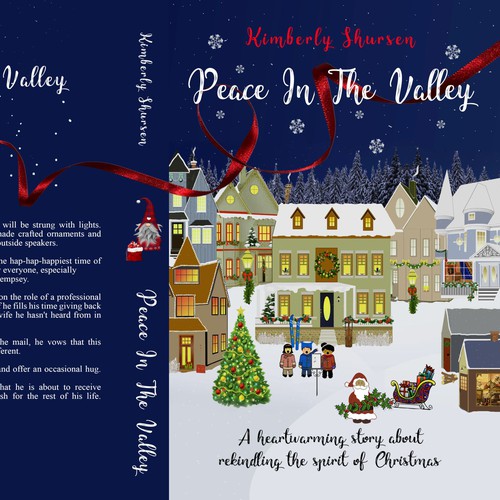 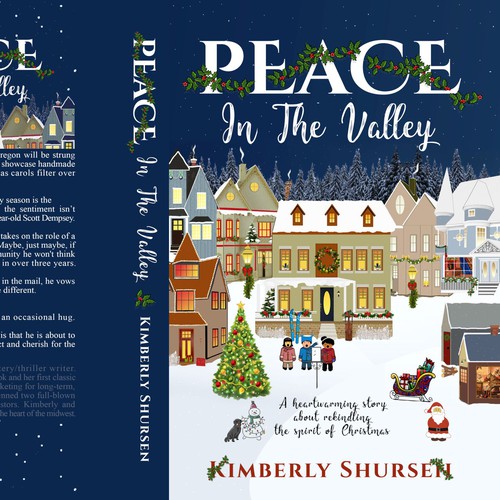 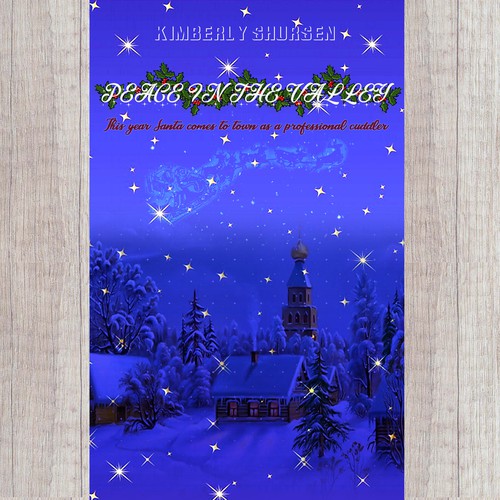 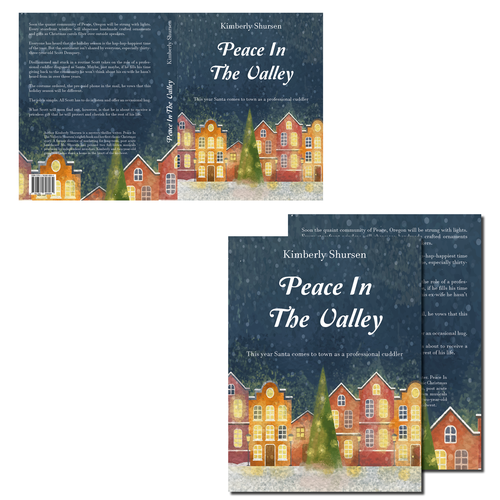 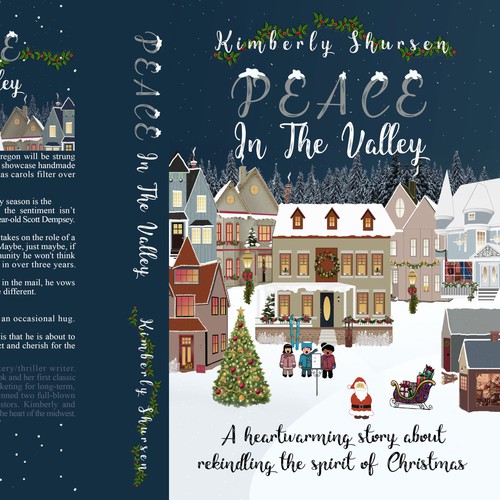 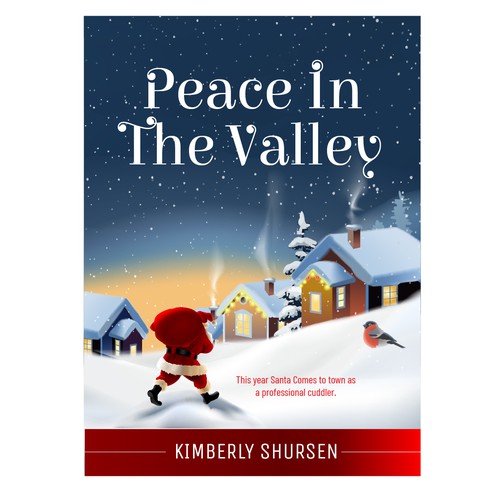 Peace In The Valley

Author Kimberly Shursen is a mystery/thriller writer. Peace In The Valley is Shursen's eighth book and her first classic Christmas story. A former director of marketing for long-term, post acute healthcare Ms. Shursen has penned two full-blown musicals produced by independent investors. Kimberly and two-year-old grandson Lukas share a home in the heart of the midwest.

The plot revolves around a professional cuddler, (yes this is a booming business right now) disguised as Santa. Although some of the descriptions will sound as if it falls under Christmas comedy, the book is anything but. It falls under Christmas Classics. It's almost Christmas in Peace, Oregon and thirty-three-year old Scott Dempsey refuses to spend another Christmas pining over his wife Beth who left him for another man three years ago. He sold the house they built together, has tried to move on but just can't let her go. Scott and his father Gabe run Dempsey Hardware; the business Scott's parents started before Scott was born. Peace sits in a valley surrounded by rolling hills with a backdrop of mountains and has a population of 2200. Christmas is important in Peace. The town square will be decorated; every store front will compete for who wins the prize for the most creative (santa on the rooftoop or cut out life size Santa's made of wood, their mouths open as if singing holding songbooks) that type of creativity. Store fronts are filled with homemade items from aprons with Nostalgic Christmas sayings to hand made ornaments. And, in the middle of twon square, the regal two-story stone courthouse with turrets on either side will be lit up with lights that match the lights that travel around the square from street lamp to street lamp. You get the picture - baskets of pine branches hanging, bright red ribbons tied at the top, etc. In other words a Charles Dickens type of picturesque scenery. When Scott sees an online article on professional cuddlers (yes this is a real business but I didn't even know it until I after I started the book. Silly me, I thought it was my idea. : ) The problem is that if Scott decides to entertain himself during the holidays everyone knows everyone else in Peace in the surrounding communities. But he has an idea. If he dresses as Santa during the holidays and sets out flyers for those who just need someone to listen or hold their hand, maybe, just maybe it might take his mind of Beth. What Scott discovers, however, is behind masks of smilng faces is grief, sadness, disappointment and resentment. He had no idea that the people he greeted every day in the store had such grief or sadness. Angry old Maggie Bennett who has been miserable since her husband died has a reason; four-year-old Charlie who lost both parents in a car accident a year ago lives with his Grandmother Carol and befriends Scott has no idea that another tragedy is about to happen, and a twenty-eight-year-old girl with a one-year-old child is in the states illegally fearing every day that someone will come to her door, put her in jail and take her beautiful Sophie from her forever. The story centers around behind closed doors and the masks that cover deep tragedies and regrets. Does it have a happy ending? Read the book. ha! The overall theme of the story is the story of us and that each of us face challenges that no one knows about until a stranger takes time to listen. Below is maybe a better overview.

The small community of Peace, Oregon are revving up for the holidays. In just a few weeks the town will be lit up and every window in the regal two-story courthouse that sits in the middle of town square will be framed in lights. People will greet each other jovially because, as we’ve been told, the holiday season is the hap-hap-happiest time of the year…for some.
But thirty-three-year-old Scott Dempsey wishes he could go crawl under the covers the day before Thanksgiving and wake up mid-January. He’s grown weary of putting on the holiday “happy” mask and even more tired of pining over his ex-wife, hoping she’ll come back home for the holidays and beg Scott’s forgiveness, even though he hasn’t heard from her in over three years.
After reading and then revisiting an article about a growing business Scott decides to become a professional cuddler during the holidays. But since everyone knows everyone in Peace, he will go incognito as Santa Clause. After distributing a flyer saying that Santa’s available to listen or give hugs, his pre-paid phone begins to ring off the hook.
This holiday season will be different. Scott will fill his time making old ladies happy. How difficult could it be?
But what Scott discovers, however, is that he’s not the only one who’s lost the Christmas spirit, but his problems pale compared to those he visits. People Scott has known all of his life and thought he knew well are heavily burdened by shame, guilt, and resentment, making it impossible to move forward with their lives.
The more Scott listens, the more he becomes attached which is the one thing he’s tried hard to avoid.
And now, he’s faced with a decision that will not only change his life, but those he has not only grown to care about and taught Scott the true meaning of Christmas.

The audience is adult - mostly women I assume. Most of my followers, however, are men but you put Classic and Christmas together the majority of the audience will be female. Female between the ages of 30-65 - any location - appeals to the heart and the spirit of Christmas, so Christians or those who believe in Christmas.

I am looking for a painting type of cover, not a photo. A Christmas village with lots of details, lights, maybe holly that wraps discretely around the title. Also Santa should be in the pic, he doesn't need to stand out, but the story revolves around Santa as a professional cuddler.I envision the cover as a beautiful painting of a peaceful quaint town in the valley decorated beautifully for Christmas. I am open to sophisticated, intricate, creative designs but I can buy a photo, download fonts and do my own cover. I am looking for creativity. If you like, please take a look at my book Miracle on Amazon. That was designed here, on 99 designs with no other designs that even came close to the creativity or a picture with a spot-on vision of what the book is about. I envision a picturesque setting of a highly detailed christmas village. I don't have a particular vision but the feeling of the Christmas spirit due to detail, sophistication and stunning beauty. Like a picture perfect christmas card.

I don't want real life photos but a picturesque feel to it that could be a painting.

Comienza ahora
Book cover on belonging for business owners looking for the edge in their marketing
AU$ 399
CEO's, leaders, solopreneurs and experts in their field trying to create greater certainty in their business growth and
110
entries
21
designers
Book cover for non-fiction
199 US$
138
entries
21
diseñadores
A man who is a business man by day and gangster at night. Show the man's duality.
US$ 399
Ages 18 to 65, both black and white, male and female from the inner city to suburbia. This book has violence, romance an
21
entries
4
designers
Book Cover for a adventure Cozy Mystery
399 USD
Women who love romance and cozy mysteries. The heroine is 60 years old.
21
entries
7
designer
Catholic Book Cover Needed
799 US$
Devout Catholics in their 60s and 70s.
81
entries
17
diseñadores
Powerful and visual health supplement Amazon KDP book cover
399 US$
Both genders starting in early 20's. People who already have compromised immune systems, worried about corona virus, or
194
entries
51
diseñadores
Más información sobre diseño de portada de libro o revista
Vea como funciona