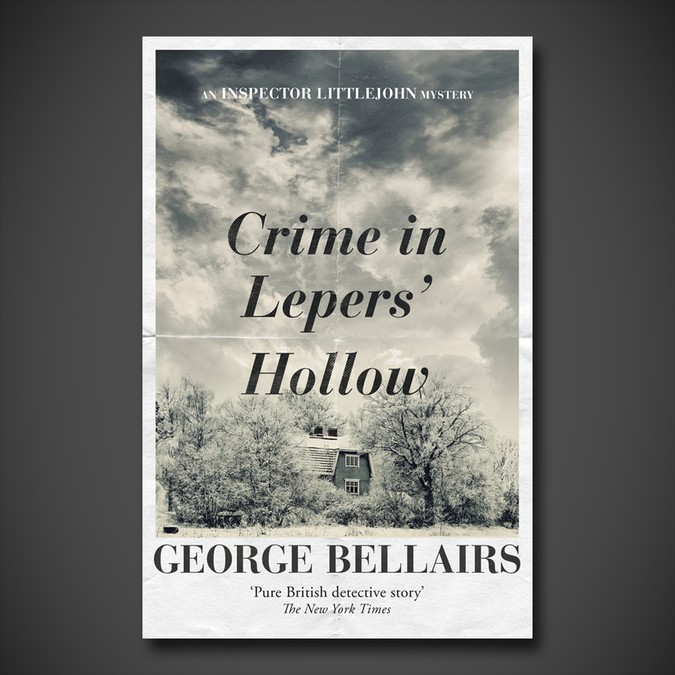 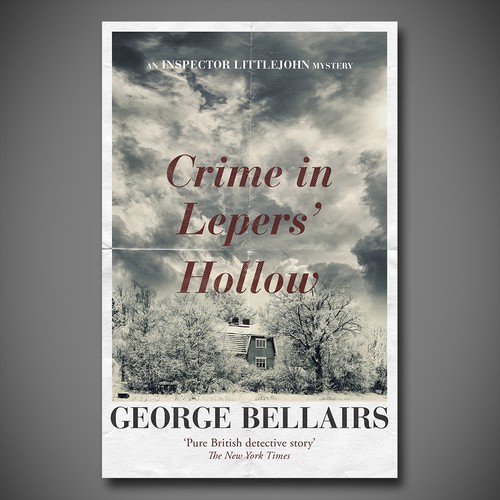 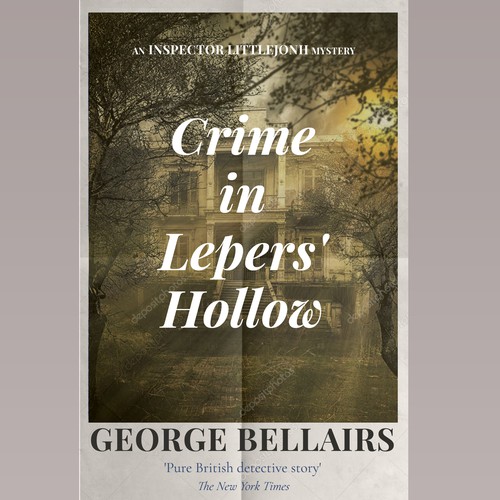 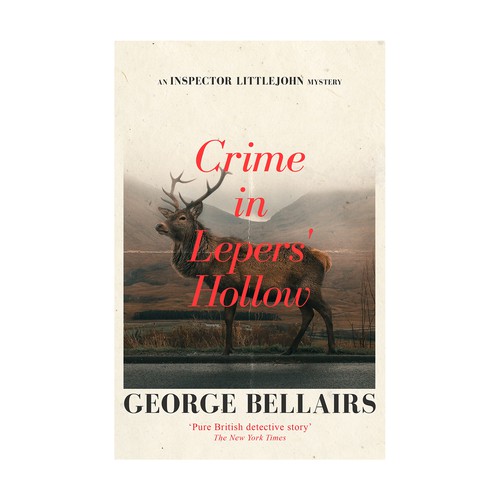 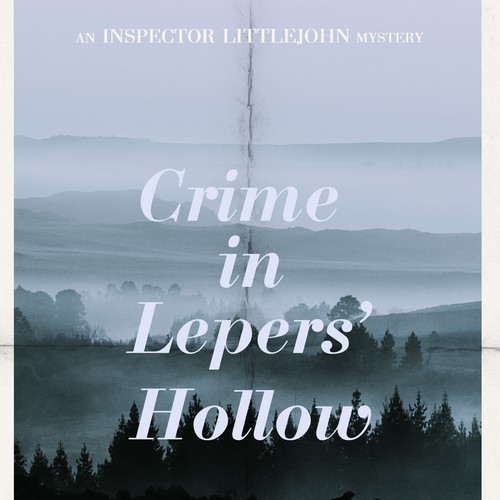 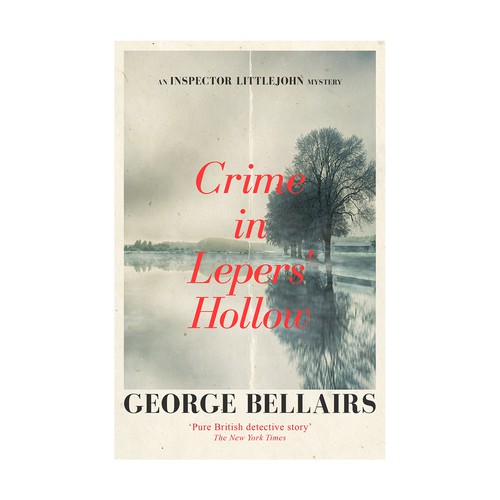 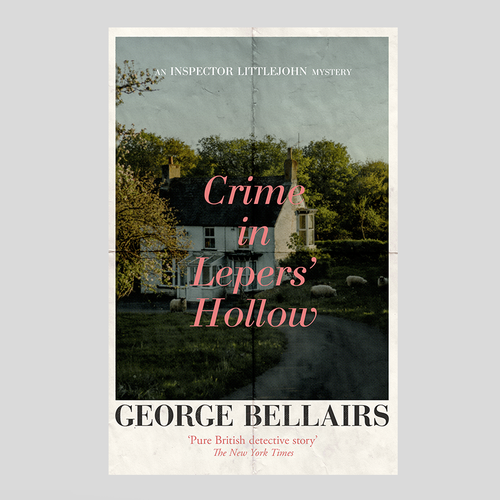 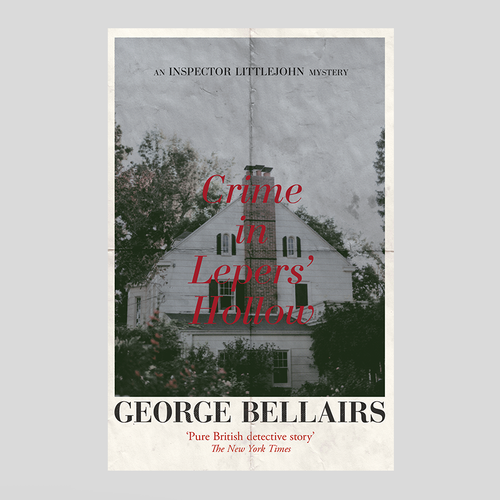 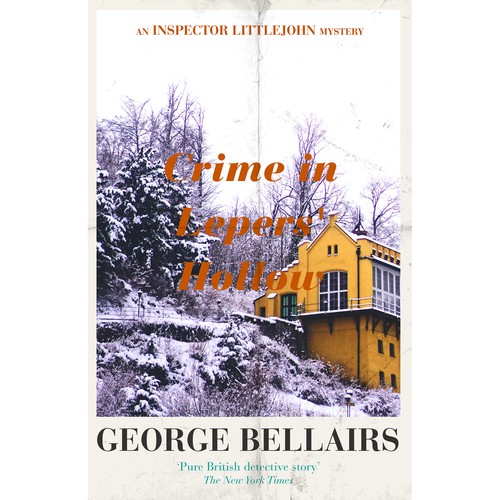 “One of the subtlest and wittiest practitioners of the simon-pure British detective story,” New York Times

“Bellairs works in a comic tradition that extends from Ben Jonson… Each character has a particular trait exaggerated to the point of obsession or caricature.” Susan B. MacDougall

The trip to Tilsey was meant to be a holiday for Detective Inspector Littlejohn.

But the DI soon finds himself caught up in a network of family intrigue involving hate, deception and murder.

In 'Crime in Leper's Hollow', DI Littlejohn must unravel the mysteries of the Crake family.

Starting with the death of Nicholas Crake, the affairs connected to the family seat, Beyle House, make for a gripping tale, one which George Bellairs tells with humour and suspense.

We have permission from our designer for another designer to carry on his series look. We are looking for that style to be replicated *as closely as possible* so that there doesn't appear to be a break in our covers throughout the series.

- these covers are obviously very image led, so the quality of the photo is key
- though the images do seem a little irrelevant, they are in some way tied to the story
- this title is set in a small village town at Christmas
- primarily at an old family home/estate

*A few setting quotes:*
'Beyle House, for generations the home of the Crake family, stands a mile outside Tilsey in four acres of wooded grounds. Alexander Crake, who built it, was a horticulturist of some repute and surrounded it with fine trees which were well tended whilst the family money lasted.'

'The trees are ragged, the bushes and grass beneath them overgrown, the once graceful yews, fuchsias and box, which topiary art converted into peacocks, cones, and even dancing ladies, are now running riot. Rhododendrons still bloom, but the bushes are the size of haystacks and as coarse. The little ornamental fishponds are choked with weeds and the dead leaves of many autumns, and the rustic arbours and the rose beds have tumbled down in decay.'

'The route was as black as ink for no sign of dawn was showing. Lepers’ Hollow held a belt of mist like dark cotton-wool and the headlights of the car came back in their faces. Littlejohn got out and led the way through the valley with his torch. Below, he could hear the stream rattling over the stones, and, in the woods round Beyle, owls were calling. At the bridge in the hollow itself, the fog was thickest, and then, as the road rose, it gradually cleared and the way became quite visible again. There, in the valley, Beyle House, its feet lost in the mist, its towers black against the surrounding night, thrust its gloomy mass to the sky and as if to accentuate the darkness of the rest a light shone from beneath one of the towers.'

'There was silence, broken only by the roaring of the gale. Outside, the snow had turned to rain and the water lashed and splattered the windows, driven almost horizontal by the cutting wind.'

Please see the uploads of the first titles in this series for reference. Again - we are looking for an exact replica of style. Please don't throw in any wildcards that don't adhere to the style.

Contemporary Romance cover
399 USD
Readers who like contemporary romance with young professional characters engaged in timely events
44
entries
12
designer
Creative Book Cover for a Female Dating and Relationships Title
$ 199
Women reading this book are usually younger and they’ve just been through a breakup. They don’t know how to collect the
150
entries
24
Designer
Minnesota Cabin scene to appeal to women who like love stories
$399
Female, USA, 18-50
142
entries
27
diseñadores
Book cover for non-fiction
US$ 199
162
entries
14
designers
Mind blowing cover for a business and money title
$ 199
Most people reading the book are experiencing some financial strain. These readers are seeking practical advice on rest
79
entries
14
Designer
Book Cover for WWII Historical Fiction
US$ 399
People who like WWII and historical fiction
71
entries
21
designers