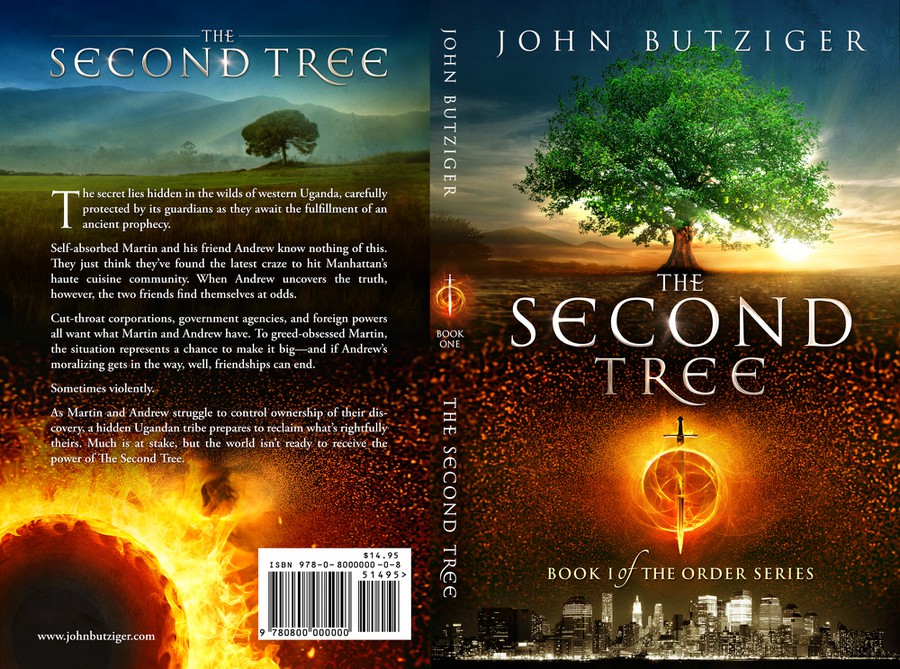 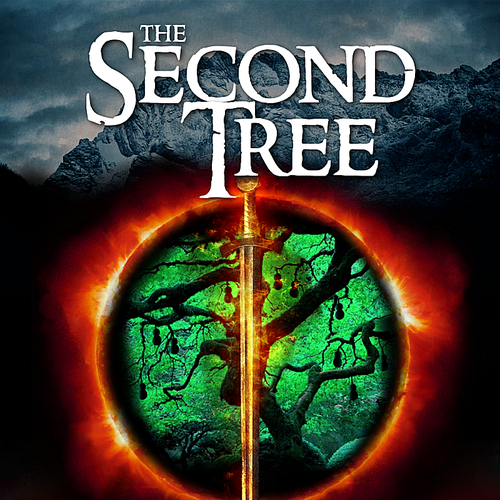 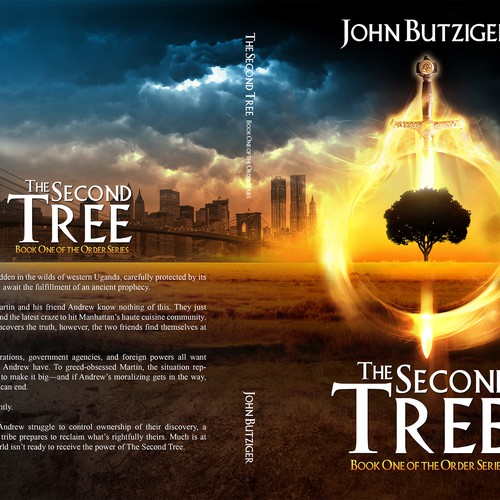 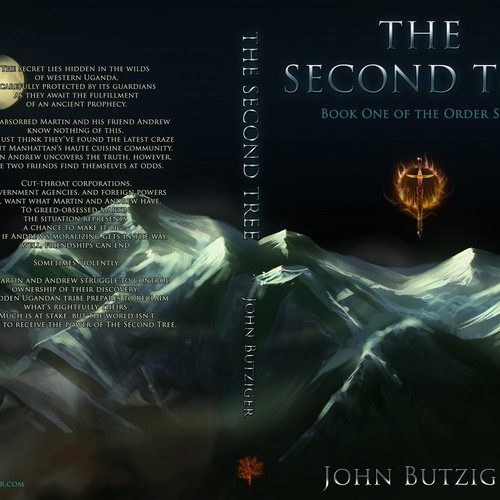 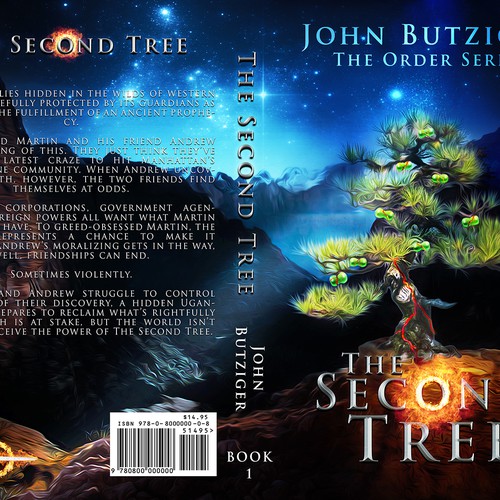 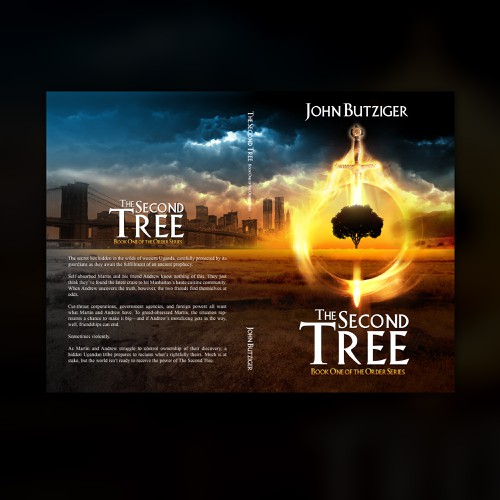 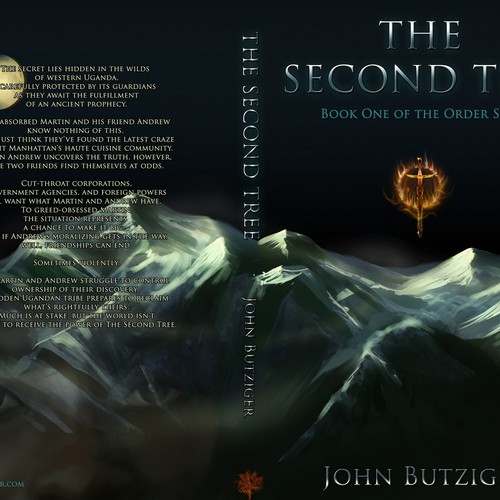 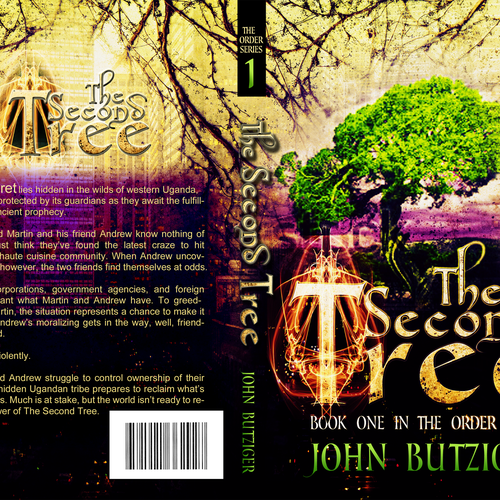 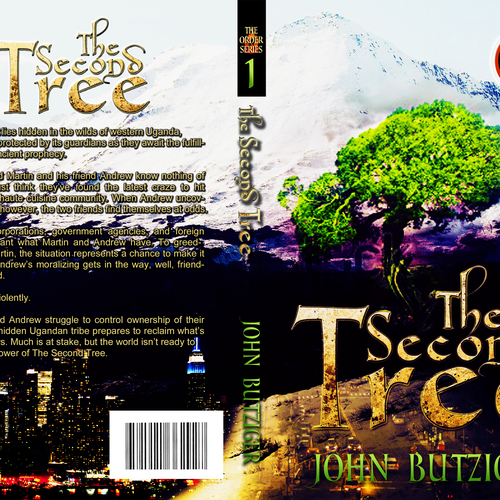 Hi Guys - regarding the logo, I'm less interested in just a sword or sword/flame circle as a cover alone. I envisioned the flaming sword/flame circle logo to be a supporting element to a background that shows off something of the tree or Uganda/Manhattan or variations on all that that support the story line.

Also the sword of the logo should be a sword that would invoke images of crusades or earlier, more primitive swords - it would have been a sword in the time of Adam and Eve sent to keep them out of the garden of Eden..

Thanks! We're starting to get there...

I'm thinking more of a classic look for font and imagery. So less modern fonts, more classic (but not calligraphy or something like that) - the story has an element of the historical and the to it, as well as ancient religious backstory, so I'd be interested in imagery and fonts that relay that notion, but not something that seems stale and old. Something that indicates the supernatural / religious history element of the story somewhat while not looking too fantastical...

Also the logo element is pretty key - I'd like to use whatever logo element that is featured on the cover on a website promoting the book as well.

Novel Cover – Need cool, impactful, thrilling cover for The Second Tree, the first book in a series called, “The Order Series” to be published on Createspace.

Description:
This is an Action/Thriller novel with supernatural powers, exotic settings and compelling imagery. The story takes place in the mountains of western Uganda as well as in New York City.

There is a tribe hidden in a valley half-way up the snow-capped Rwenzori mountain ranges of western Uganda. This tribe has protected a secret fruit tree in the hidden, tropical valley for hundreds of years. They believe this tree to be the second tree of Eden mentioned in Genesis – not the Tree of Knowledge, but the Tree of Life. The fruit of this tree imparts immortality, near-instant regeneration, immunity from sickness and great strength. The fruit is green and shaped like a figure eight, like two balls joined together, with red veins streaking across the surface, burrowing down through the skin.

In the Bible, after Adam and Eve were cast out of Eden, a flaming sword and cherubim were set up to prevent access to the Tree of Life (see Genesis). Hundreds of years ago the lost, desperate Ugandan tribe was faced with a dead-end at a cliff face that was covered with vines at the end of a ridge. They set the vines on fire, which burned in a great circle, revealing the entrance to the lava tube. They followed the tube to a secret valley in the mountains. They found the tree in the valley, and they eventually came to believe it was Eden, because of the properties of the fruit they found on the tree there. Later they have dreams with images of a ring of fire wreathed in flame and a flaming sword. In these dreams a prophecy was revealed to them that the power of this fruit would one day be needed by the world, but that they were to protect it until the time of need was revealed to them. They each have tattoos of a flaming sword wreathed in a circle of flame on the inside of their forearms, which signifies not only their protection of Eden, but also the imagery in their prophecy/vision.

In modern days, one member of a culinary cable channel film crew stumbles into the tribe’s secret valley, finds the fruit by accident and brings it back to New York as a new culinary find, where its power is revealed to two friends. The friends have differing views on what to do with this newfound power, until the fruit is taken from them. One of them travels to Uganda to find the fruit again while the other tries to attract the pharmaceutical industry, growing mad with desperation and greed from overconsumption of the fruit. Eventually the tribe learns that the secret is out, and races to stop the friends. They battle through a warzone of terrorists fighting Ugandan nationals in a mining valley to contain the damage, but it may be too late. The US and Chinese militaries have learned of the power as well.

This is not a religious book – it has religious / biblical and historical references, though.

Imagery I DO want (although feel free to take a chance on your own ideas/concepts):
• Dark background
• High-contrast, bold, impactful, gripping images – realistic or impressionistic, but not cartoony
• Needs to look good in thumbnail size for e-books on Amazon
• Fonts: High contrast, impactful, large, cool, bold, clear and easy-to-read even in e-book thumbnail size
• A logo featured prominently featured at the top – think Divergent or Hunger Games cover, but I don’t want it to look like a complete rip-off of these covers
• The logo might be of the fiery flaming sword in a ring wreathed in flame – a little like the Eye of Sauron - or of a tattoo (the one on each tribe member’s arm) – same image, different medium
• Check out http://www.weavesilk.com for textural ideas for the sword and flame
• Also check out the flaming sword image (also attached) at http://janasbibelsvar.blogspot.com/…cably.html or by going to Google (images tab) and search with keywords “svard flaming sword” (can’t use this exact image though without rights)
• It might be cool to have western Ugandan mountains subtly in the background, possibly mashed up against a Manhattan skyline, each representing the two contrasting settings

o The second tree: “The tree was tall and elegant, bright green leaves veined with red streaks like the     fruit. Although the branches were delicate and the fruit heavy, the tree was sturdy and robust, the fruit gracefully bowing each branch as if to present its bounty with a flourish.”

o The lava tube entrance, wreathed in flame, that leads to the valley

Imagery I DON’T want:
• Close-up images of the Fruit
• Blatant Religious imagery
• Anything Cartoony-looking
• Cluttered, overly complex imagery
• I do not want this to look like it came from a cover template

Specs:
• Must follow Createspace specs https://www.createspace.com/Product…verPDF.jsp (download the Createspace submission specification for requirements)
• Cover size is 5.5” x 8.5”
• Number pages is about 210 on cream paper, so according to Createspace specs the spine should be 0.525”
• Put website on back cover at bottom (http://www.johnbutziger.com)
• At least 300 dpi, high res images
• I’d prefer custom images (I don’t want this to look cookie-cutter)
• Title of the book is: The Second Tree
• Author: John Butziger
• Somewhere on the Front cover we need to indicate: Book One of the Order Series
• Please include back cover text as shown below with font preferences as shown in “Imagery I DO want” above

The secret lies hidden in the wilds of western Uganda, carefully protected by its guardians as they await the fulfillment of an ancient prophecy.

Self-absorbed Martin and his friend Andrew know nothing of this. They just think they’ve found the latest craze to hit Manhattan’s haute cuisine community. When Andrew uncovers the truth, however, the two friends find themselves at odds.

Cut-throat corporations, government agencies, and foreign powers all want what Martin and Andrew have. To greed-obsessed Martin, the situation represents a chance to make it big—and if Andrew’s moralizing gets in the way, well, friendships can end.

As Martin and Andrew struggle to control ownership of their discovery, a hidden Ugandan tribe prepares to reclaim what’s rightfully theirs. Much is at stake, but the world isn’t ready to receive the power of The Second Tree.