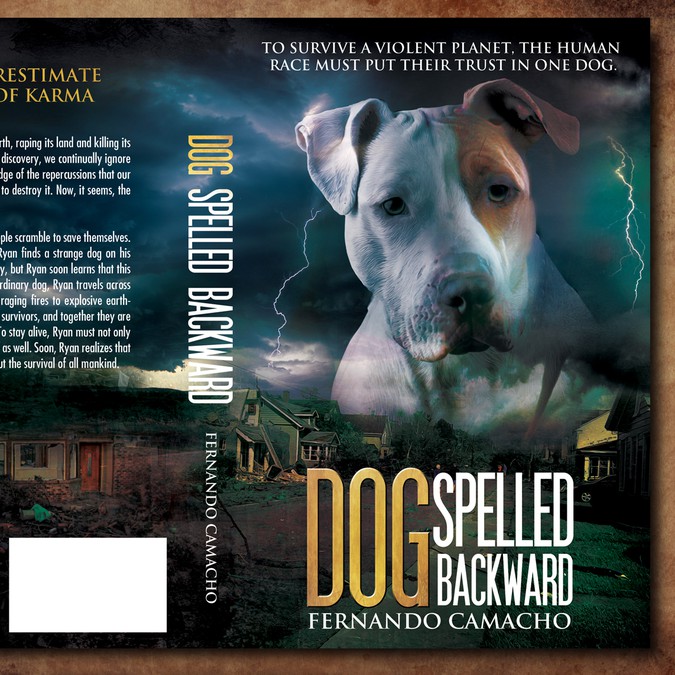 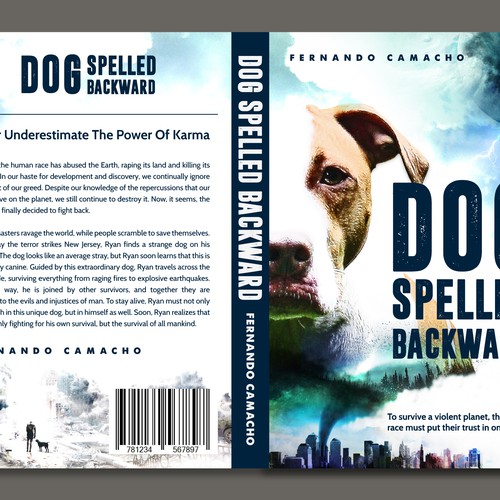 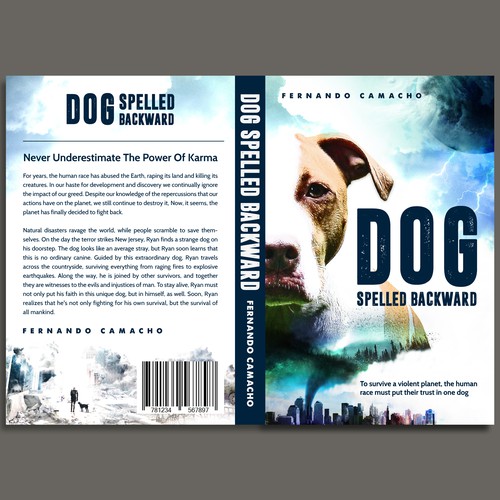 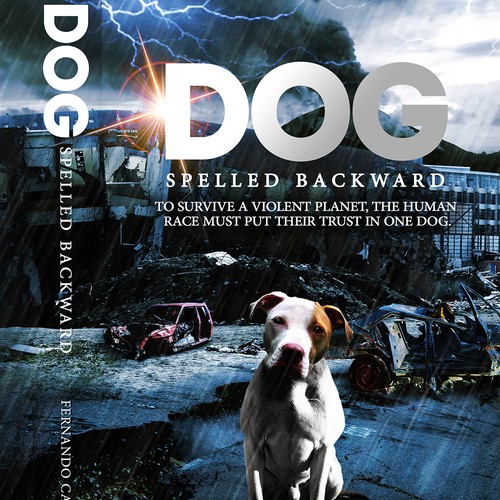 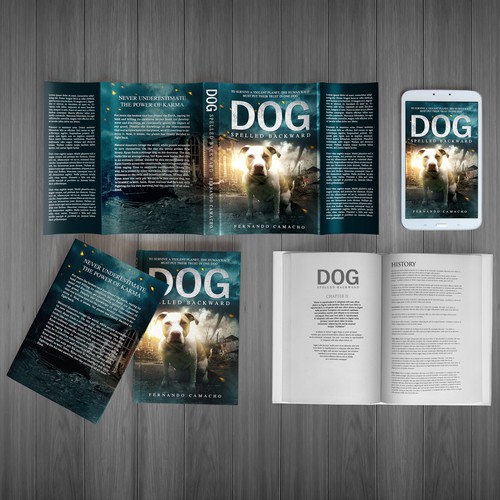 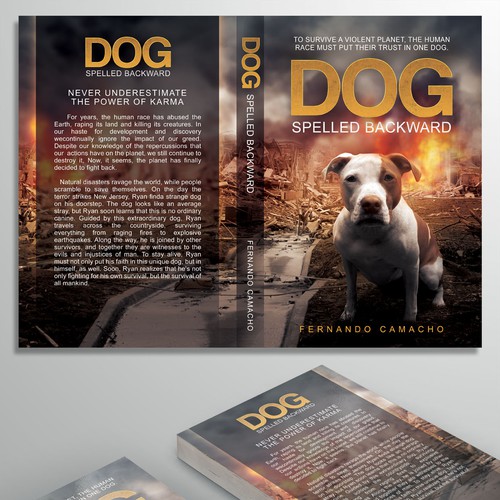 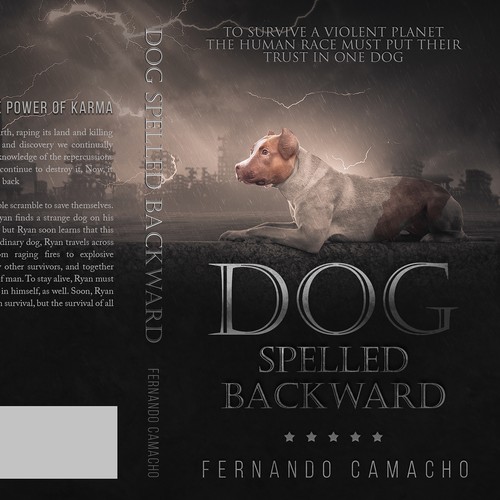 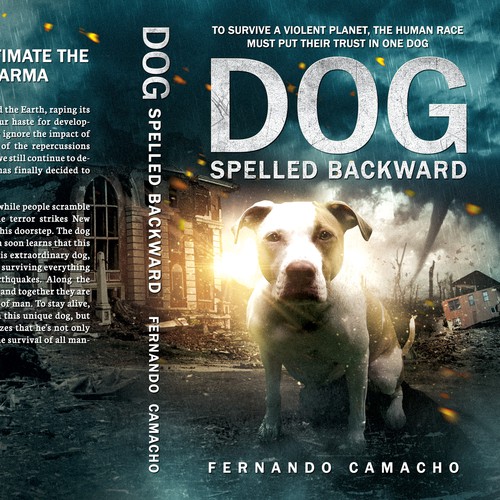 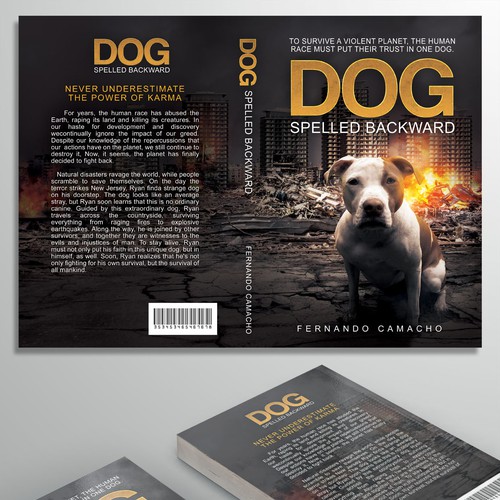 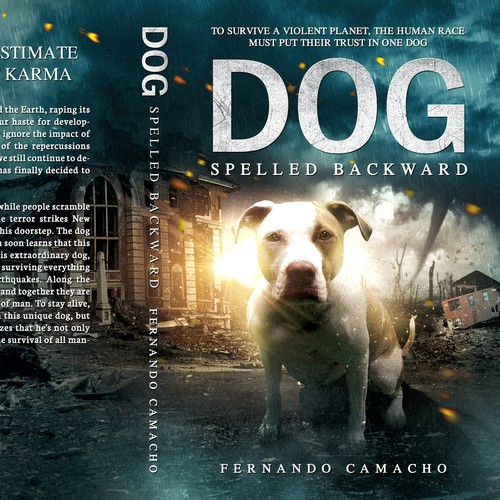 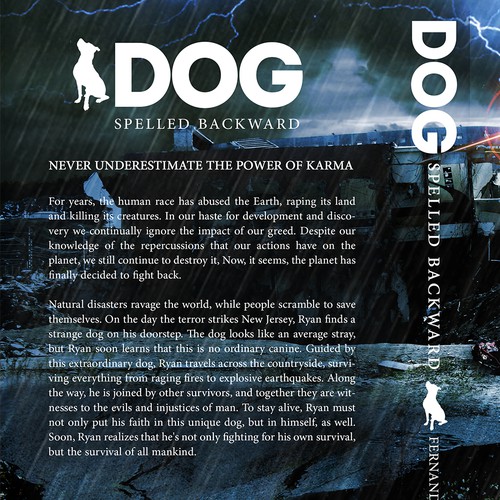 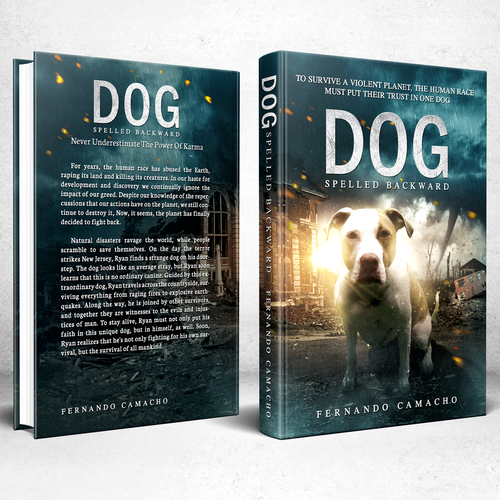 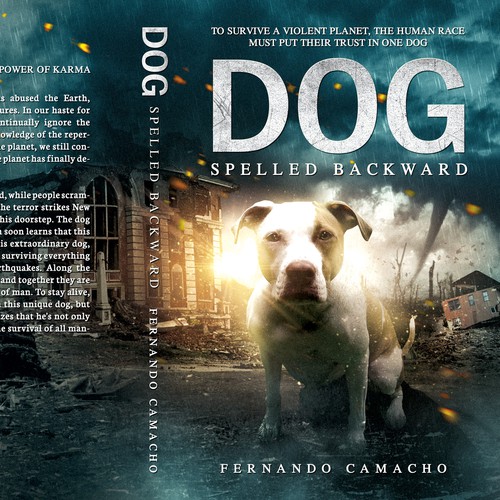 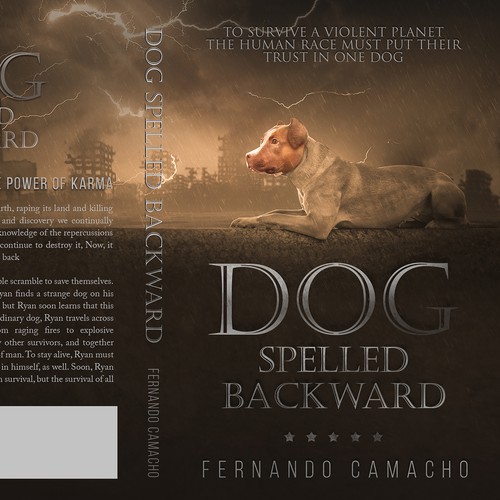 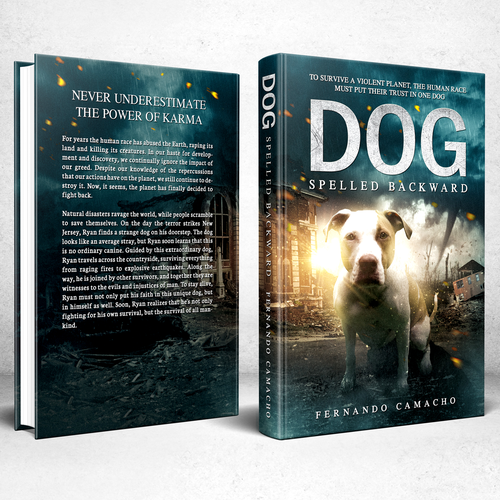 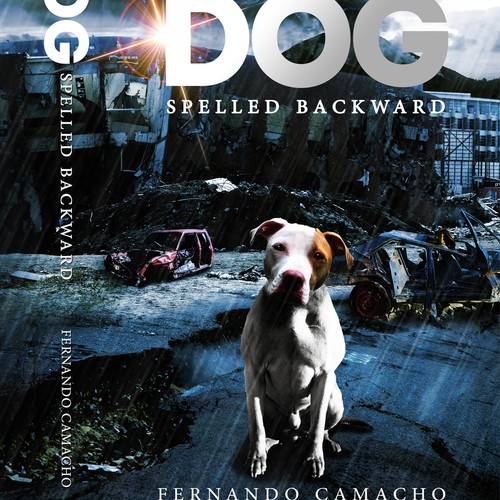 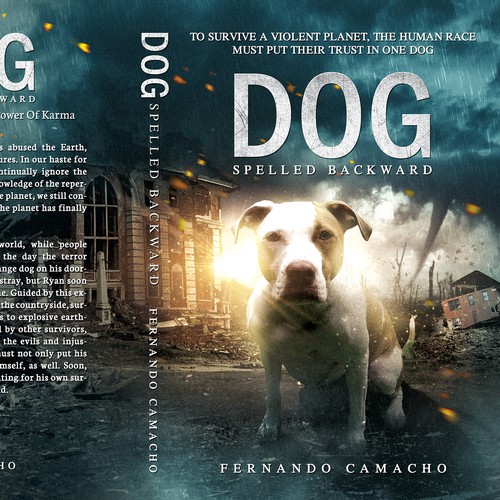 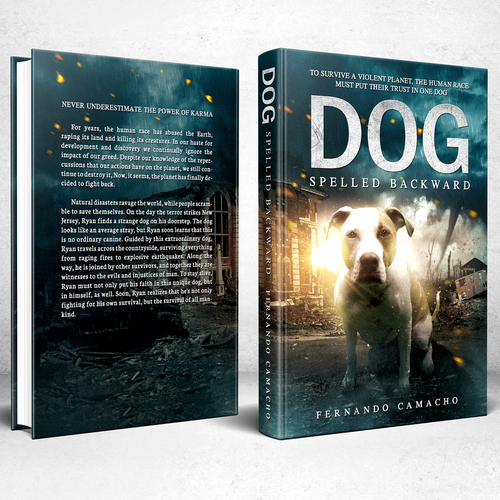 I need a cover design for my novel. It's a supernatural thriller with a conservation message. In the book a series of natural disasters happen (rain for many days causing severe flooding, earthquakes, tornados, lightning storms) and the main characters are led around the United States by a brown and white dog (a pit bull).

I would like the image of the dog on there as well as some kind of visual that gets the readers excited about what the story might hold.

FRONT COVER:
Dog Spelled Backward (I would like the word DOG to be larger and emphasized - that should be the focal point of the title)
By Fernando Camacho

I would also like the following somewhere on the front cover:
To survive a violent planet, the human race must put their trust in one dog.
--
BACK COVER:
Never Underestimate The Power Of Karma

For years, the human race has abused the Earth, raping its land and killing its creatures. In our haste for development and discovery we continually ignore the impact of our greed. Despite our knowledge of the repercussions that our actions have on the planet, we still continue to destroy it, Now, it seems, the planet has finally decided to fight back.

Natural disasters ravage the world, while people scramble to save themselves. On the day the terror strikes New Jersey, Ryan finds a strange dog on his doorstep. The dog looks like an average stray, but Ryan soon learns that this is no ordinary canine. Guided by this extraordinary dog, Ryan travels across the countryside, surviving everything from raging fires to explosive earthquakes. Along the way, he is joined by other survivors, and together they are witnesses to the evils and injustices of man. To stay alive, Ryan must not only put his faith in this unique dog, but in himself, as well. Soon, Ryan realizes that he's not only fighting for his own survival, but the survival of all mankind.
--
I'll include a design that I did for the first edition of the book, but I know you can do much better. Don't copy this design - use your creativity and come up with something epic.

Please let me know if you need anything else.

I've included a few pictures of what the dog should look like for your reference.

Book cover for book about a wild adventure into inner exploration.
€ 359
Mainly women between 25-45 who love to travel and have become interested in spirituality, wellness or other alternative
88
entries
25
designers
We Are Sew Powerful Cover Contest
$299
seamstresses
219
entries
31
diseñadores
Book Cover for Novel: Red Sky at Morning
US$ 399
Men or women who like thrillers; Individuals who like biblical prophecy; Readers who enjoy espionage and military novels
49
entries
11
designers
Professional cover for a business book
199 $US
Target audience: Male Aged between 20-35 USA People currently working a day job
149
entries
28
designer graphistes
Book Cover for a adventure Cozy Mystery
US$ 399
Women who love romance and cozy mysteries. The heroine is 60 years old.
21
entries
7
designers
Design a striking book cover for "The Man-Butcher Prize" a cutthroat fantasy
629 £GB
The target audience for my book is anyone 16+ I feel that the potential fan base might skew slightly male, as the main
150
entries
30
designer graphistes