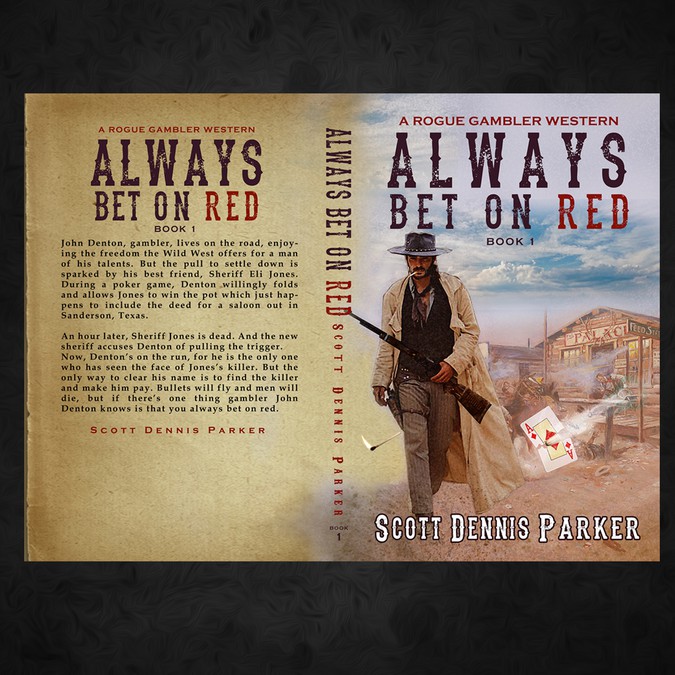 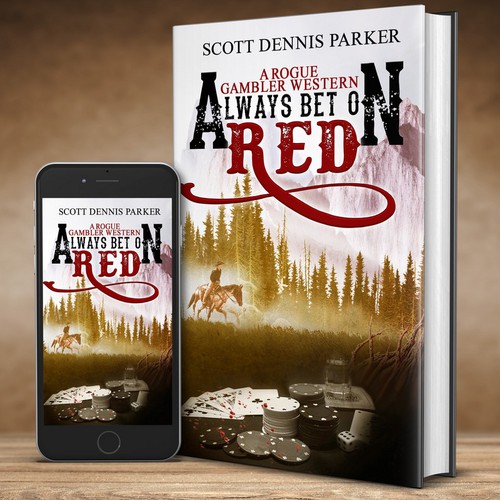 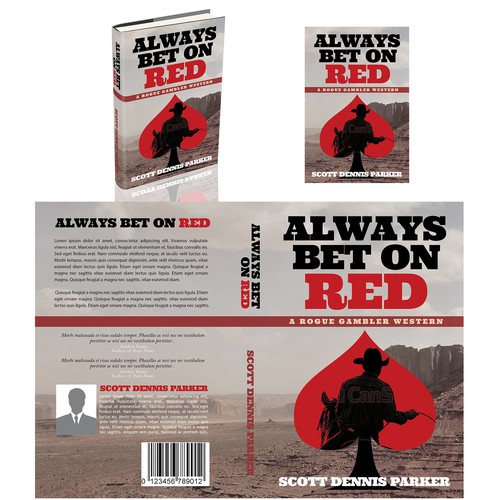 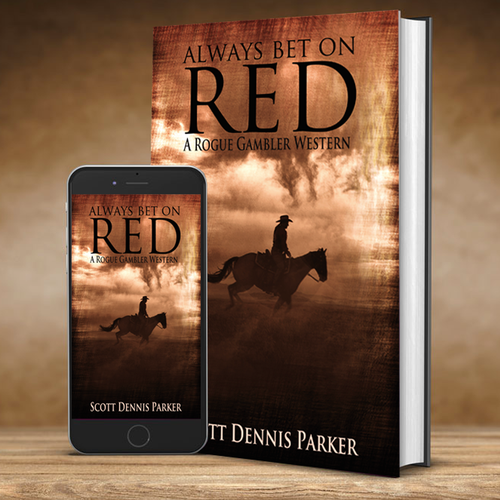 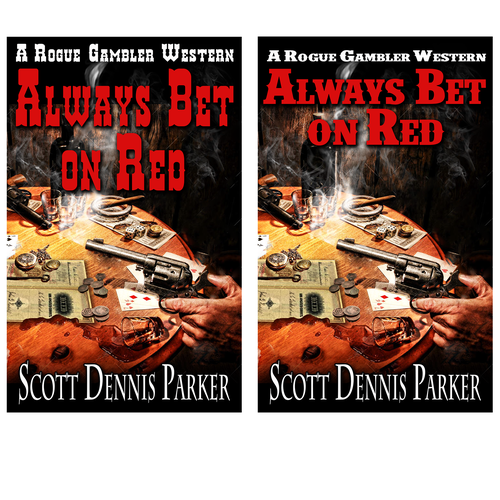 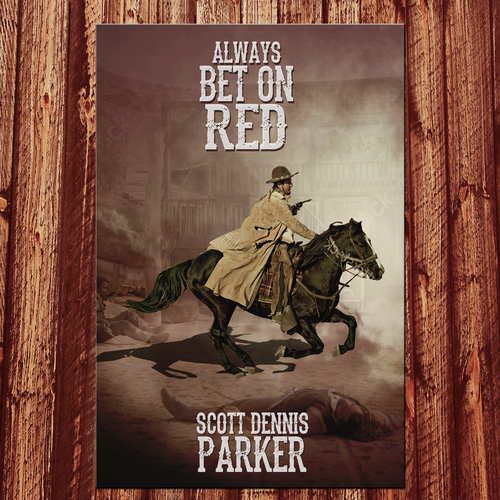 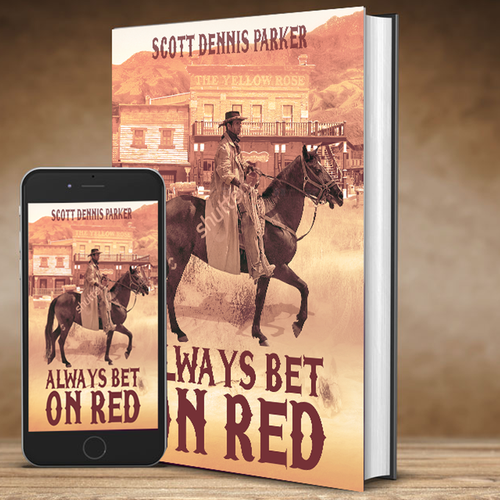 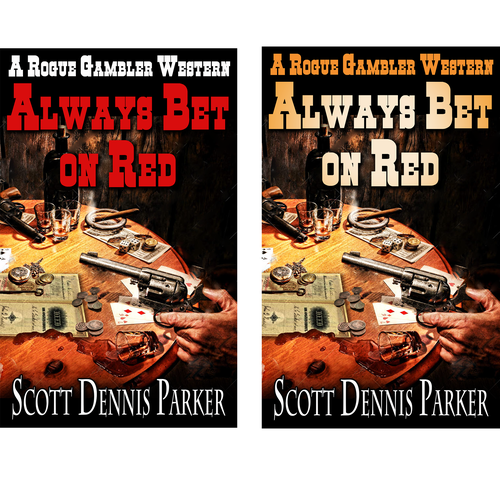 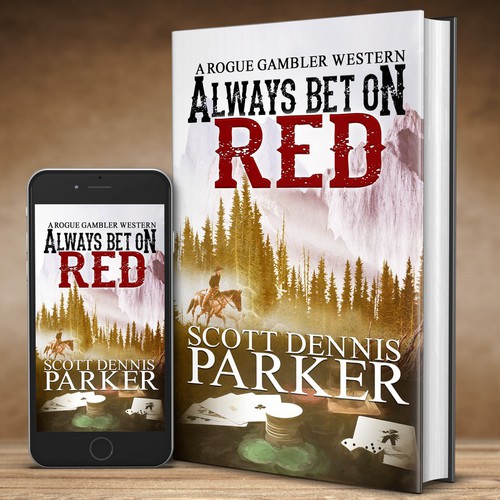 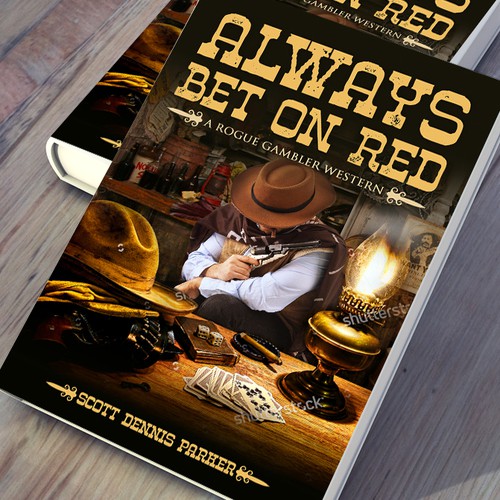 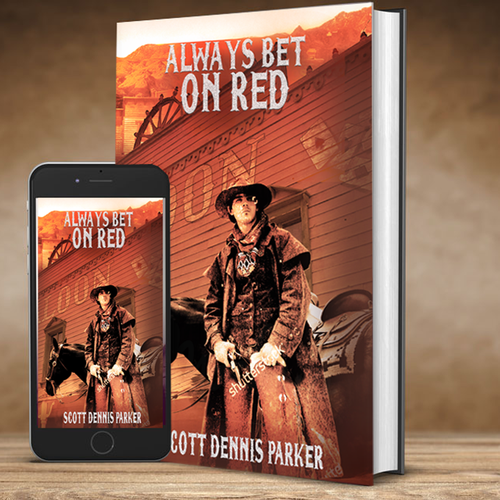 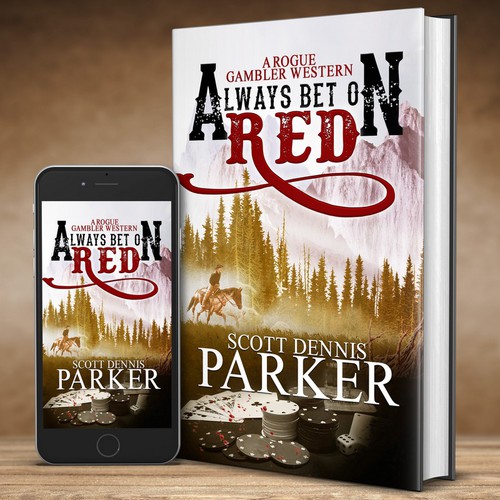 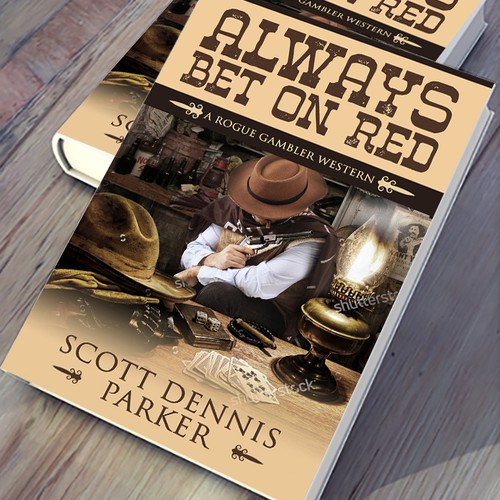 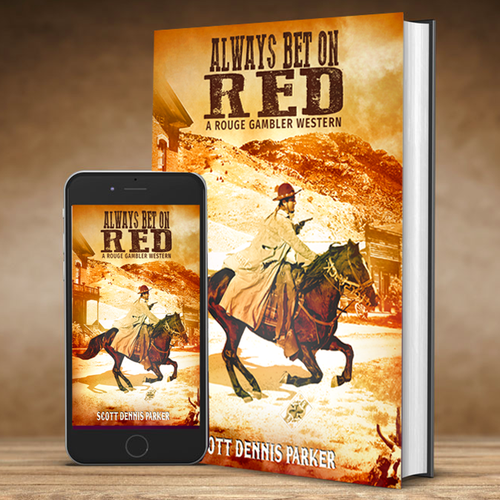 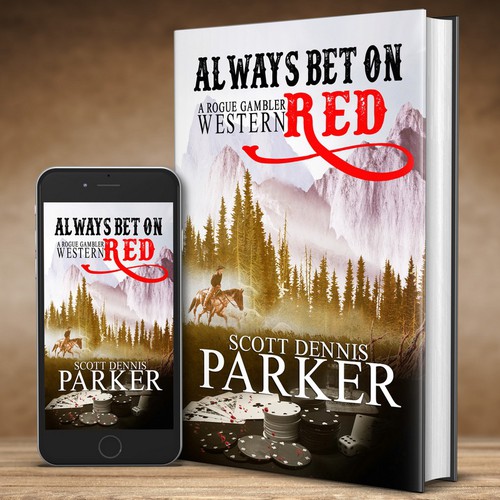 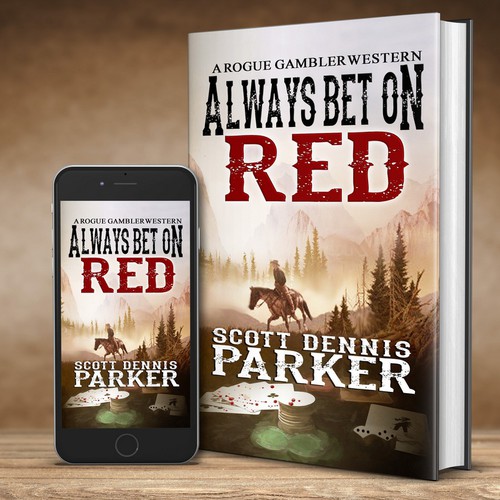 Description of Book: Always Bet on Red
John Denton, gambler, lives on the road, enjoying the freedom the Wild West offers for a man of his talents. But the pull to settle down is sparked by his best friend, Sheriff Eli Jones. During a poker game, Denton willingly folds and allows Jones to win the pot which just happens to include the deed for a saloon out in Sanderson, Texas.
An hour later, Sheriff Jones is dead. And the new sheriff accuses Denton of pulling the trigger.
Now, Denton’s on the run, for he is the only one who has seen the face of Jones’s killer. But the only way to clear his name is to find the killer and make him pay. Bullets will fly and men will die, but if there’s one thing gambler John Denton knows is that you always bet on red.

Cover:
This is the first of a series of at least three books. However it is laid out, I would like the format to be repeatable.
TITLE:
The title is ALWAYS BET ON RED.
The sub-title is A Rogue Gambler Western
AUTHOR:
The author is Scott Dennis Parker. At the bottom of the cover. Likely in the same font as the title, but I’ll leave it up to you if you want to use a different font.
COLOR SCHEME:
Just about every cover I’ve seen at Amazon has a color scheme of brown or sepia. As much as I’d like to break with that trend, at this stage, I’m going to keep with that color palette. However, if you come up with a killer cover image, please show me. I’m willing to be persuaded.
IMAGES:
This is a western. If you examine western covers at Amazon or the ones I’ve uploaded here, they all have similar images including the following: cowboys and/or horses, pistols, shoot-outs, whatever. Many are in silhouette. As you can see from the cover images I took in a bookstore, if the cowboys are not in silhouette, they are on horseback, either just standing there or shooting off screen.
Denton is a gambler. When I came up with the title, I imagined a poker table with cards and chips. Maybe whiskey shot glasses. But also of a scattered hand of poker with blood splatters.
So, for the cover, I can imagine any of the following:
• Still shot of Denton and Queen of Spades. He can either be astride the horse or not. He smokes.
• Still shot of Denton without the horse.
• Action shot of Denton doing whatever you’d like, but probably shooting a gun.
BTW, I love action shots more than anything, but be creative.
Note: I love the old painted covers from old westerns and pulp fiction. But I know the new trend in covers is photography. I’m fine with photography, but I’d like any potential model to have multiple images to use in future novels. My preference would be to make it look painted, but I understand if that’s above and beyond.
FONT:
Whatever font used will need to be repeated in size and positioning for future covers. Probably something akin to old fashioned. If you examine the pictures I took form the bookstore, you’ll see that most covers use a serif font.
BLOCKS OF COLOR:
In the images of the Ralph Compton novels, you’ll see that portions of the cover are taken up with solid blocks of color. But more modern covers do not employ that. At this stage, I prefer a full cover, but I reserve the right to request a color block on a subsequent draft.
FORMAT:
Currently, this will be an ebook only, likely published in January 2017. When I make the paperback, I’ll likely have a solid color spine and back cover that matches the color scheme from the front cover.
However, if the scene you create is an outdoor shot or has the possibility of a wrap-around cover, I’m all for that.

Design sexy book cover for upcoming tell-all memoir
500 $US
Female readers aged 21-60 year old, Individuals interested in Narcissism and Psychology, Memoir Readers, Partners of Sex
146
entries
46
designer graphistes
Urban fantasy book cover for a new series
US$ 399
Women, aged 25-54, USA/UK/Canada/Australia. They are also fans of Kim Harrison, Faith Hunter, Seanan McGuire, and the ea
81
entries
29
designers
Design a cover for a quirky, off-beat book of life and career advice for idealistic young leaders
US$ 499
People working in the nonprofit world--employees and leaders in charities, foundations, government agencies, faith-based
176
entries
47
designers
Design a fantasy novel cover for a book about blood magic.
159 £GB
It would be a mostly female audience from the uk/ us. The book has romance and royalty elements so it mostly appeals to
83
entries
31
designer graphistes
Cavities No More
C$ 529
The book is primarily aimed at parents of young children. Anyone involved with the care of children. Nurses, public heal
95
entries
25
designers
InsideOut - Creation Speaks!
329 $US
The target audience is usually 30-60 yrs old and either "outdoorsy" or "hippyish".
51
entries
22
designer graphistes