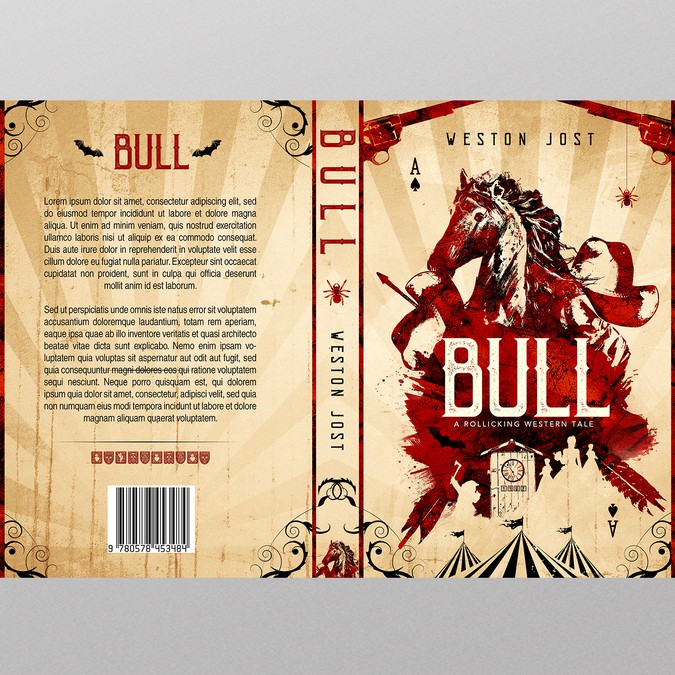 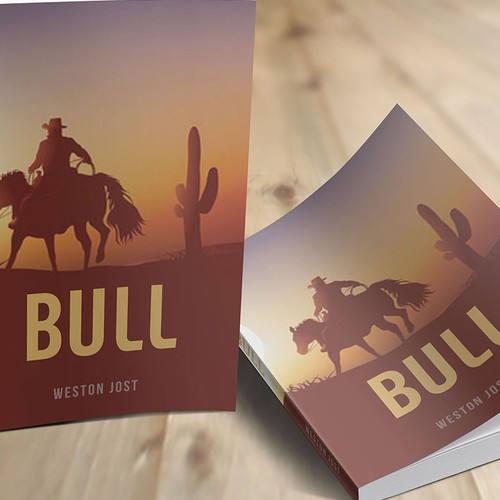 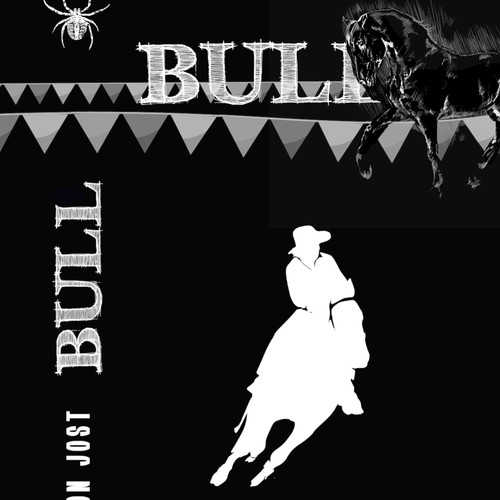 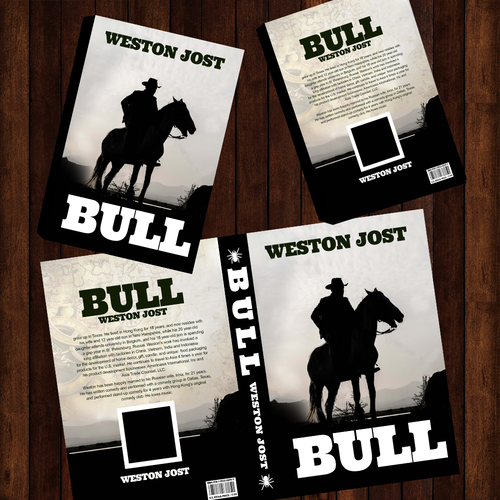 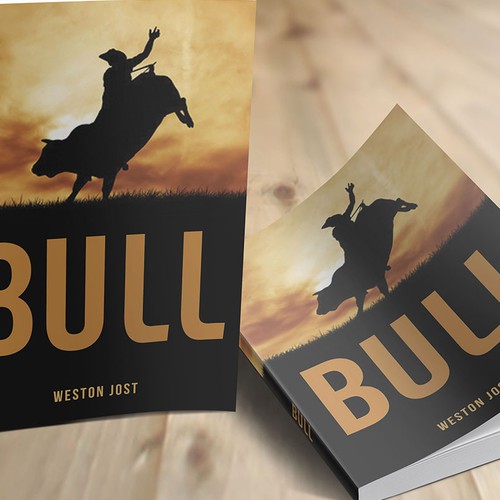 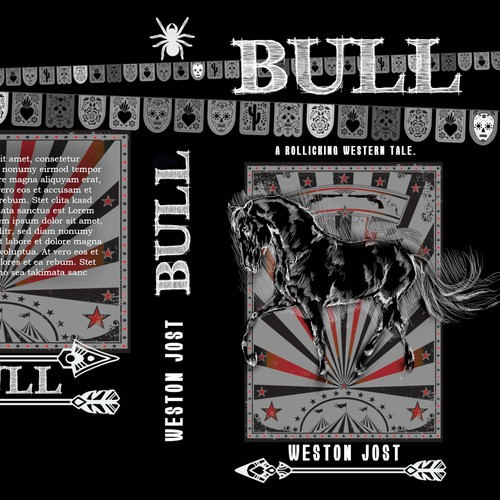 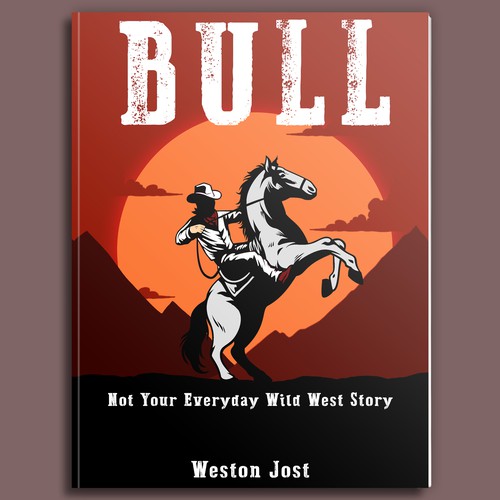 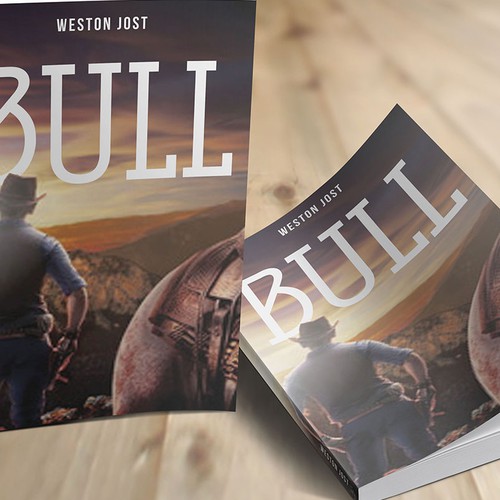 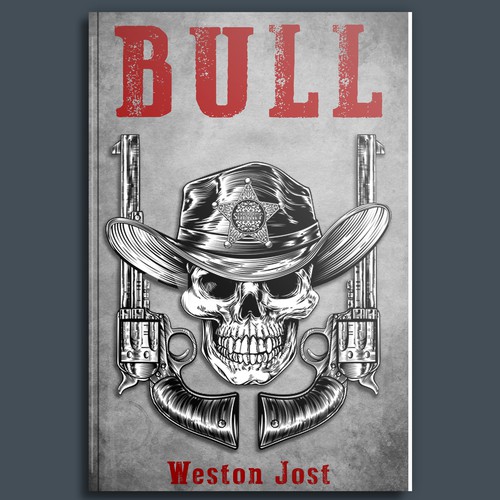 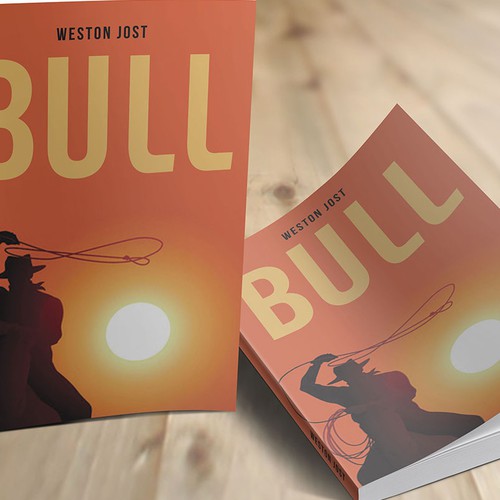 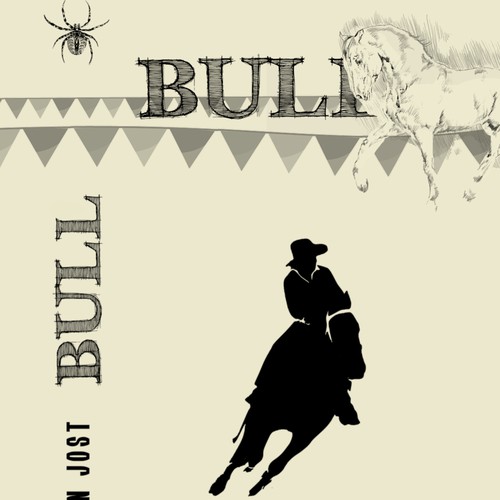 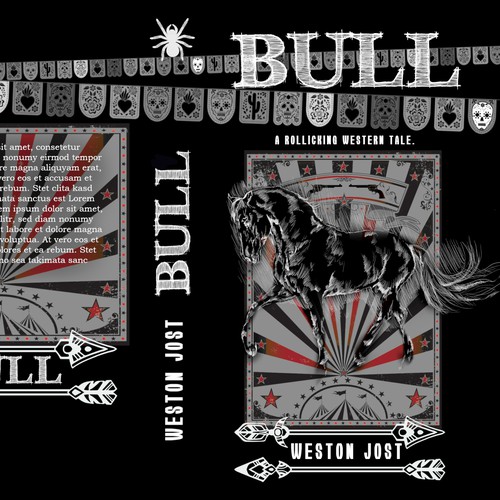 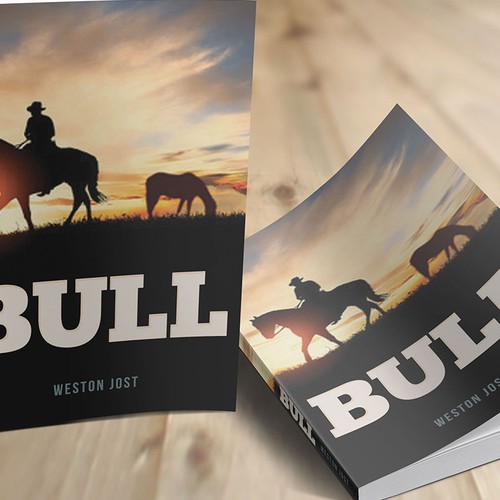 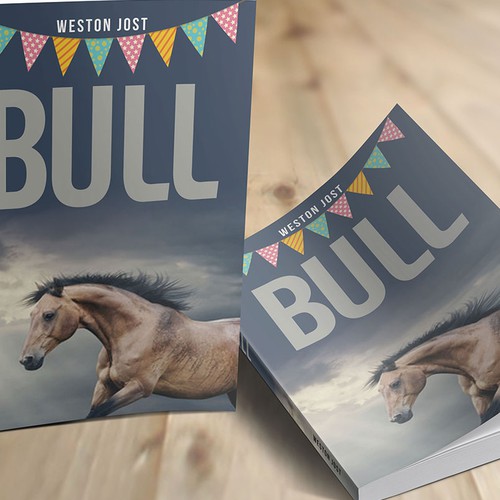 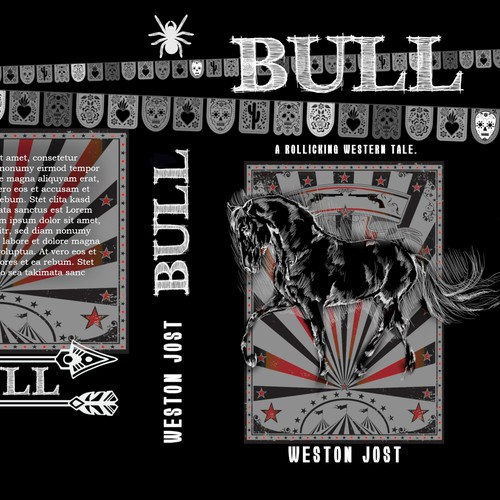 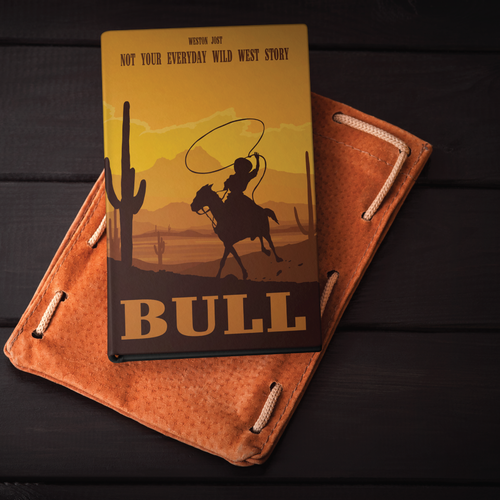 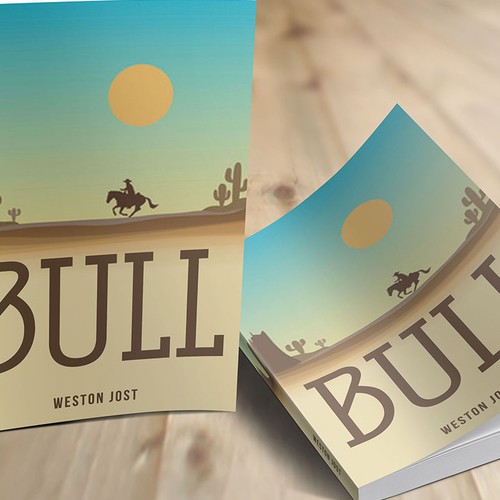 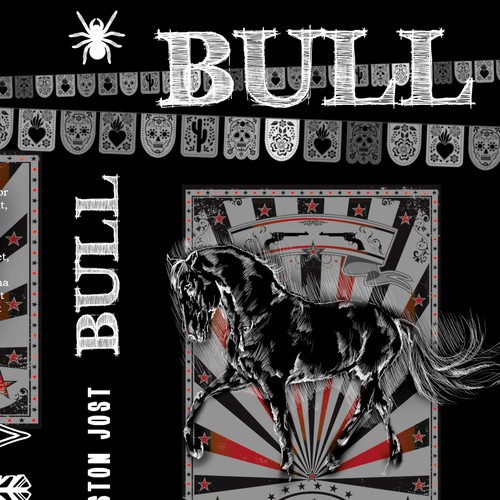 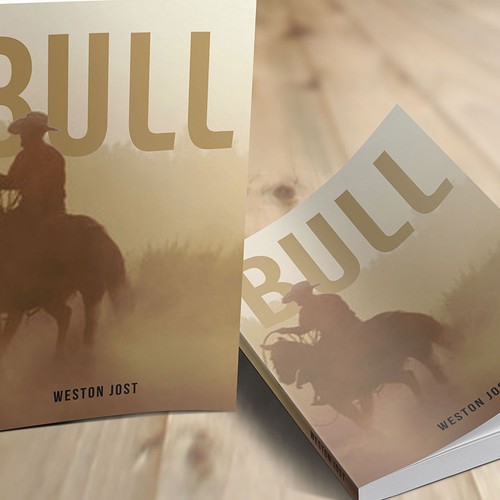 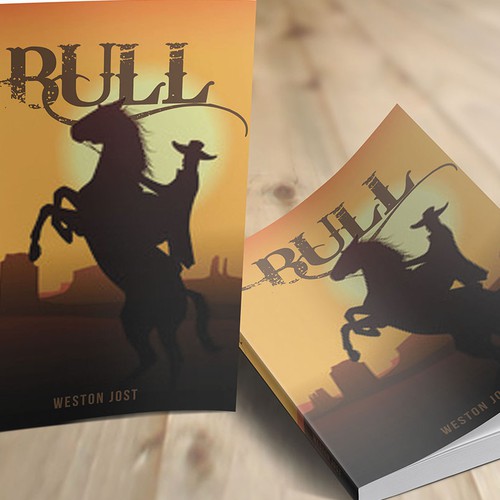 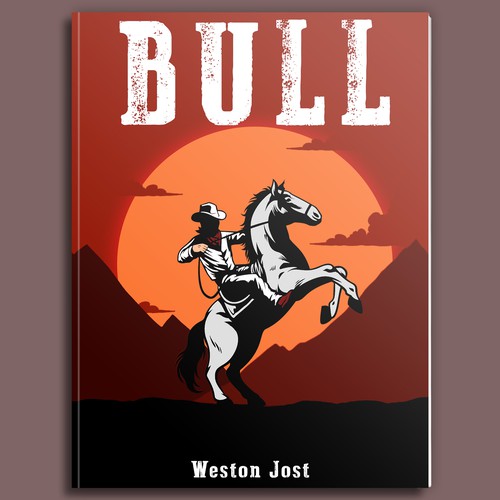 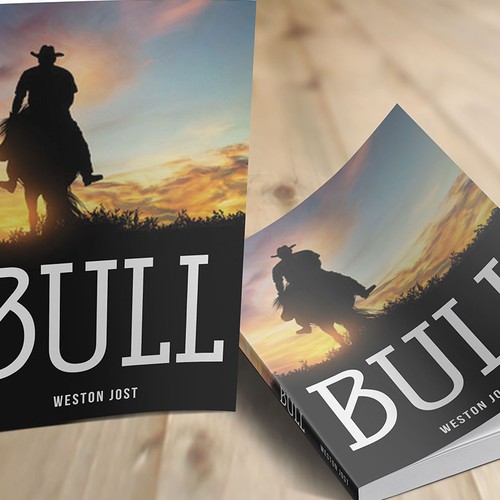 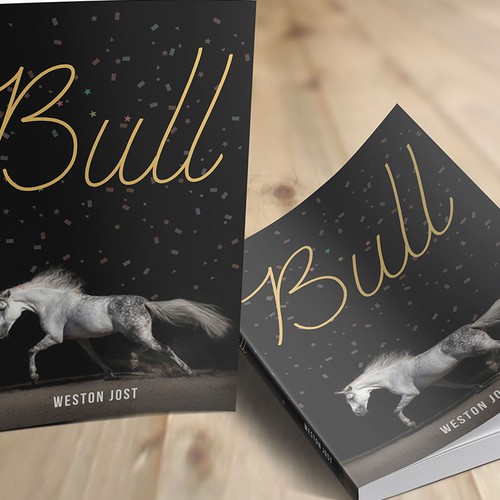 Weston Jost grew up in Texas. He lived in Hong Kong for 18 years, and now resides with his wife and 12 year-old son in New Hampshire, while his 20 year-old daughter attends university in Belgium, and his 18 year-old son is spending a gap year in St. Petersburg, Russia. Weston's work has involved a long affiliation with factories in China, Vietnam, India, and Indonesia for the development of home decor, gift, candle, and unique food packaging products for the U.S. market. He continues to travel to Asia 4 times a year for his product development businesses; Americasia International, Inc and Asia Trade Counsel, LLC.
Weston has been happily married to his Russian wife, Irina, for 21 years. He has written comedy and performed with a comedy group in Dallas, Texas, and performed stand-up comedy for 4 years with Hong Kong's original comedy club. He loves music.

Bull is an unconventional, offbeat, 1870's western story about a Texas marshal who takes an odd collection of characters as a posse to rescue four Texas women who have been kidnapped by bandits who plan to sell them to a brothel in Mexico. One of the stranger members of the posse is the marshal's horse, Bull, who was raised in a circus by dwarfs, which has given him useful skills, but which has warped his personality. It's a race against time for the rescue, and during the course of the chase, one of the captive women, who has studied entomology, has decided to take revenge on the bandits by killing them off one by one with lethal creepy crawler "biological" weapons. Additional members of his posse include a recently widowed, old woman sharp shooter who almost bested Annie Oakley in a shooting contest, a clever transsexual Kiowa Indian and her boyfriend who is an ex-gun trader with the Indians, the first black, British deputy in Texas who has a sawed-off shotgun named Thunder & Lighting and a six shooter he calls Hard Rain, a retired gambler who believes that Lady Luck has an Evil Twin, and two identical dwarf twin brothers with blue hair who have turned a pair of outhouses into pretend time machines so they can enthrall people with their time travel act in their road show. Other characters include a Chinese deputy named Noodles who has taught the marshal to kill bandits with chop sticks, a slightly unbalanced female baker who has had a long-time crush on the marshal, and whose baking skills include odd cake creations for hangings, funerals, and the marshal's exploits with bandits and Indians, the marshal's oldest friend; a crusty, old sheriff aching for retirement, who has a Mexican bartender girlfriend, and who lies to bandits about having seen an armadillo as big as a sheep, an Apache chief and his son who both think the marshal's horse is the infamous Evil Spirit Horse and that the marshal himself is the Water Spirit Man, and a vicious Comanche chief named Takes-Too-Many-Hairs who is wanting to kill just about everyone.

Anyone who would enjoy a western that has unique, offbeat characters, humor, and surprising plot twists. I would say the main demographic for my book would be adult men and women who like western fiction, but who want something unique and different in the genre.

I need a book cover for an unconventional western novel. Although the book has a mixed bag of colorful characters, and humor, I want the cover to have a kind of elegance, while at the same time capturing the offbeat nature of the book.
The title of the book is called Bull, who is the nutty, circus raised horse in the book and who is featured as one of the main characters throughout the novel. He is a beautiful spotted grey horse with a black mane and stands 20 hands tall when most horses are between 14 to 15 hands. (see his attached image, and note that his right ear has been partially shot off)
Basically, I suppose I'm thinking that the imagery should be a combination of those things associated with a western novel (horse, gun, cowboy, Indian), but combined with images that reveal the unconventional, offbeat aspects of the story, and which arouses curiosity and an alluring intrigue about what's inside the book. I'm trying to avoid the cliched looking western novel cover
What I'm NOT trying to capture with the cover is something that is a humorous menagerie of images, because this book actually has an overarching serious tone since lives are at stake, but it also has some light and dark humor and visual humor. In other words, when someone sees this book on the shelf, I don't want him or her to look at it and think there is silliness inside, but I want them to be intrigued by the cover. I want the cover to have some mystery to it. At the same time, I don't just want the horse on the cover because then someone may think it's just a story about a horse. It’s basically a rescue story, with humor, to see if the Laredo marshal, with his unusual horse and his odd assortment of posse volunteers, can get past the bandits and Indians in order to keep the four kidnapped women from being sold to the Mexican brothel.

Here are some other descriptions for imagery inspiration: During the chase, one of the women, who is a 15 year-old girl, is wreaking havoc with the bandits with her clever use of "biological" weapons in the forms of lethal creepy crawlers and also a bat with rabies. A Mexican redleg tarantula is also in her bag of tricks. The dwarfs in the book are twins and both have bright, died blue hair. They have taken a couple of outhouses that they have installed side-by-side on a flatbed wagon, painted one red and one yellow, installed large clock dials, 4 digit number tumblers, and a cow bell on the front doors, and with deception, use them convince their audience that one dwarf can travel through time. The vicious Comanche chief has killed their other 2 dwarf brothers who had bright red hair and yellow hair and wears their scalps on the front of his vest. He also has long braided black hair with the small skulls of two rats tied to the end of the braids. He wears crows’ feet as earrings.

I saw a cover for the book “Night Circus” that was completely black that had white silhouettes of elements or characters. (see attached image). Maybe the black with white silhouettes works, and maybe it doesn't. I really don't know. It's one of those "I'll know it when I see it" kind of things. But if black and white mostly, then maybe it also includes other single color elements like you see with the red cloth across the black & white tent in the background of the Night Circus, which, in my story's case could also include a circus tent because of Bull's time with the circus, plus red and black striped legs of a Mexican redleg tarantula, red outhouse time machine, black ace of spades card, a 3-layered cake with gallows & rope noose on the top layer, women silhouettes, and a cowboy etc., Perhaps the horse, Bull, is a grey silhouette with black mane. He sometimes snatches the hats off of people and tosses them, so maybe the horse image can also include a cowboy hat in his mouth. Also, one of the main bandits has a malformed arm that was broken badly in the elbow as a child, so it's locked into place like the arm of a praying mantis, (which is what the marshal told him it looks like) but it's his gun arm that allows him to quick draw when pulling his weapon from a custom-made holster he wears across his chest. So, would we have a silhouette of a praying mantis arm holding a six shooter?
If going with the black & white concept, then there are other colors to achieve a similar look, which may even be better than black. For example, what about a red background with white and black silhouettes, or a white background with black and red silhouettes. Or a tea-stained, sandy brown background with gossamer, creamy silhouettes with red and turquoise accents. Think about WHAT COLOR COMBINATIONS could create A BEAUTIFUL COVER that has intriguing imagery that makes the potential customer quite curious as to what this book is about.
I really don’t know if the book cover is better served if having many colors, or if it’s like the 3 or 4 color toned, silhouetted style I described. Maybe some gossamer, ghostly silhouette of Bull with other imagery inside his silhouette? I really don’t know. I'll leave it up to you. I have attached some images of book covers that may capture some of the tone or mood” of what I’m thinking.

With regard to the book dimensions, I would be using the most popular 6" x 9" size for paperback book. You can choose whatever font style you think works best with the cover art.
Thank you for your efforts !!!!
Best regards,
Weston

YA Romance cover
199 $
Teen to adult
104
entries
27
Designer
Modern art nouveau-style fantasy cover for printed book. Ebook cover project to follow.
£ 319
Primarily for adults, but younger readers would enjoy it too. A general audience that likes epic fantasy with psychologi
8
entries
2
Designer
Book Cover for Historical Adventure/Romance Novel
199 $
People who like Phantom of the Opera, historical fiction and historical romance.
63
entries
7
Designer
Need a book cover that draws in young adults to the world of pirates and mermaids.
399 USD
Children and young adults. People who are interested in island life, pirates, mermaids and strong female characters.
60
entries
21
designer
Design first-ever Eco Bible book cover
$500
We intend this book to be bought and read by Christian readers as well as Jewish and secular ones. Most readers of the b
223
entries
32
diseñadores
Looking for a Book Cover of 5 "Star" Quality
USD 259
Business and life coaches, speakers. Mostly women ages 40-75 who look for a short read for inspiration.
153
entries
24
diseñadores

Comienza ahora
The Death of Neo-Darwinism
$ 199
This is a hot topic and would be of interest to anyone in the academic community regardless of the discipline.
26
entries
11
Designer
Book cover for non-fiction
$ 199
156
entries
13
Designer
Mind blowing cover for a business and money title (second book in series)
US$ 199
Most people reading the book are experiencing some financial strain. These readers are seeking practical advice on rest
104
entries
20
diseñadores
Fresh book cover for a female lead mystery
399 $
women 25-45
78
entries
24
Designer
Book cover for a fiction about love, loss, and perseverance. Inspired by a true story
$ 399
Adult fiction romance love and loss mostly female
81
entries
22
Designer
Please help save a great book from a not so great first cover attempt :)
299 $
Dads/grandpas, baseballl fans/parents, anyone interested in general comedy, sports fiction, 90s nostalgia.
23
entries
7
Designer
Más información sobre diseño de portada de libro o revista
Vea como funciona