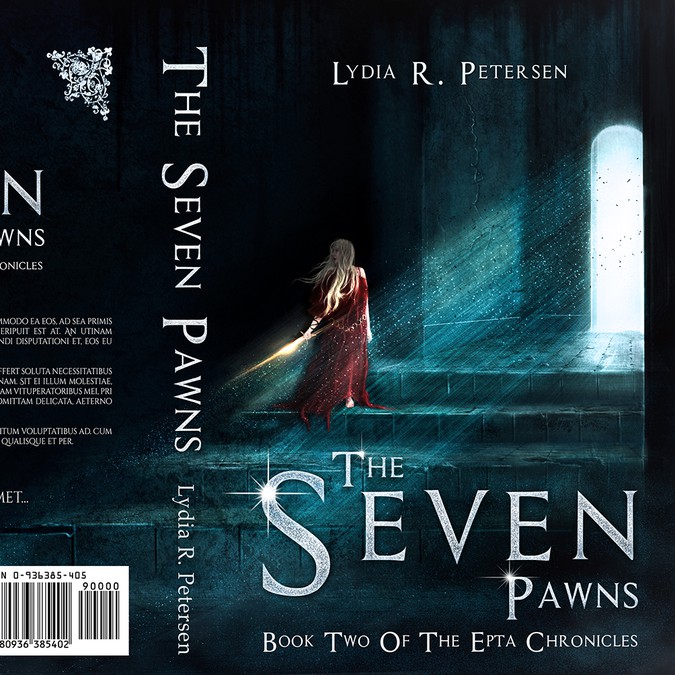 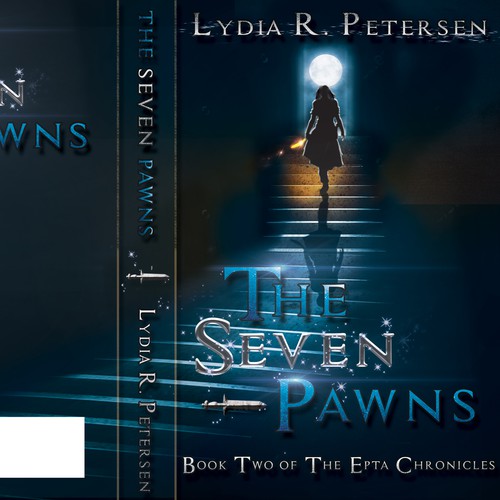 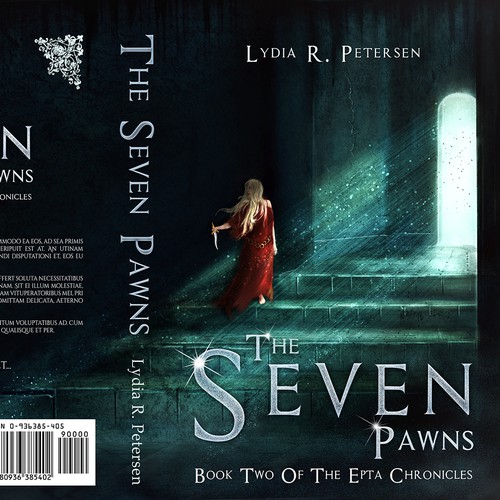 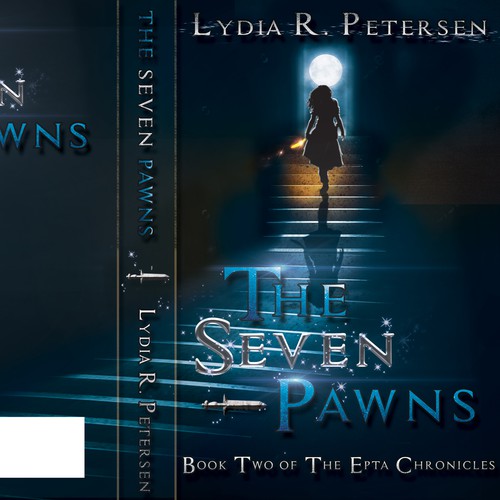 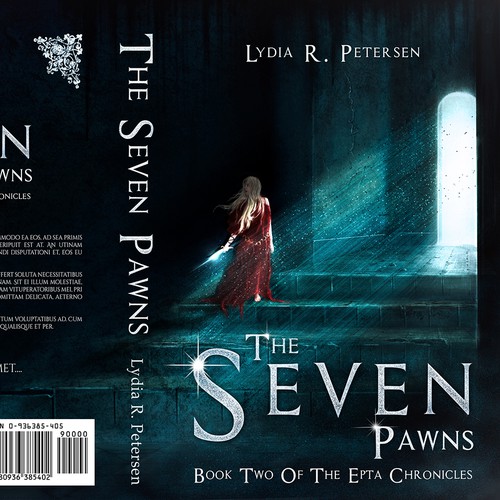 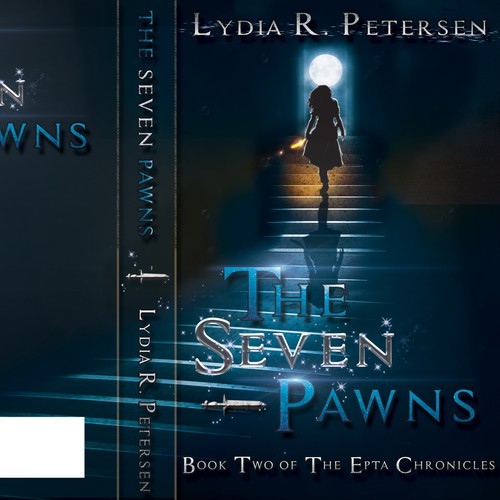 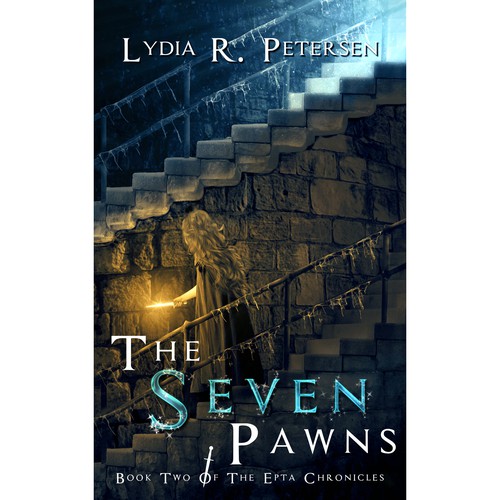 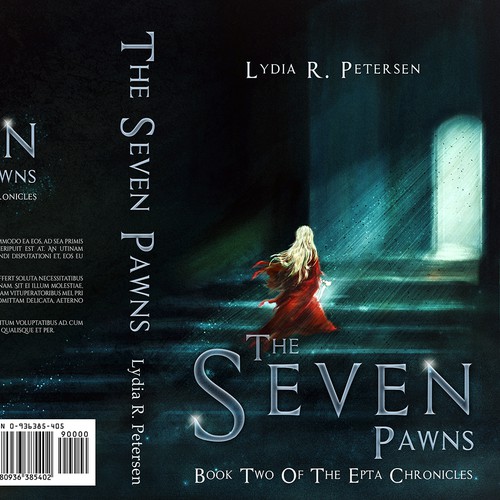 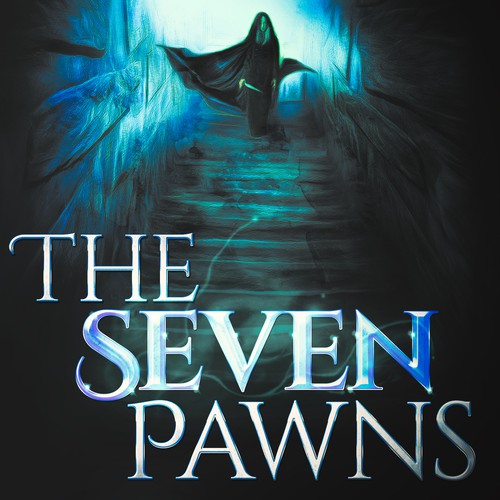 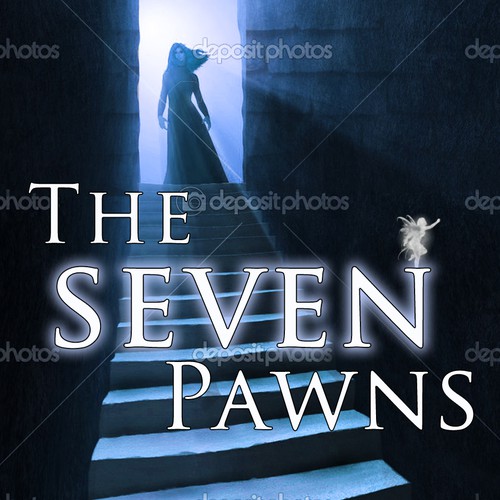 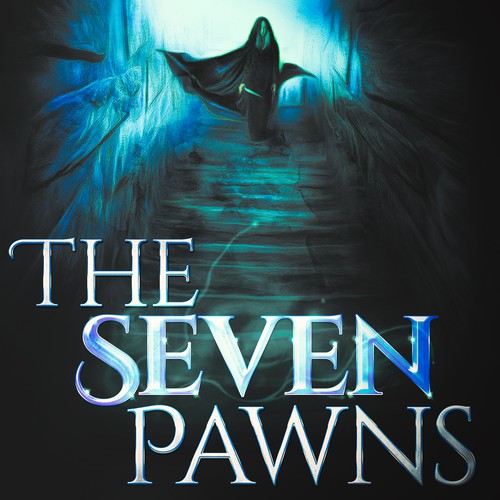 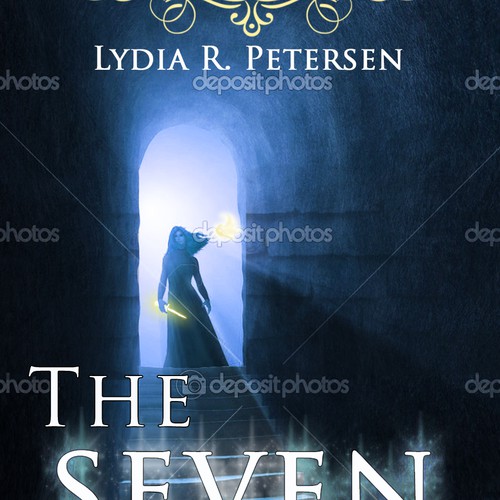 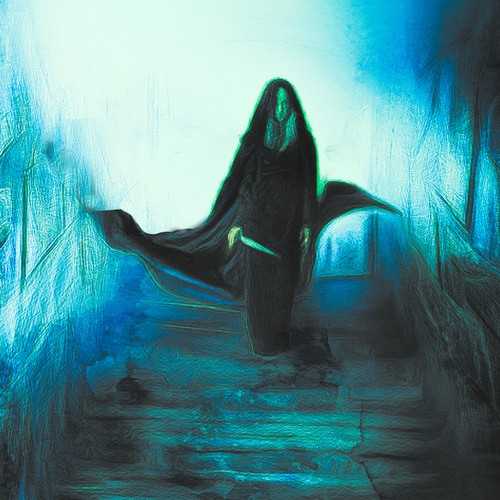 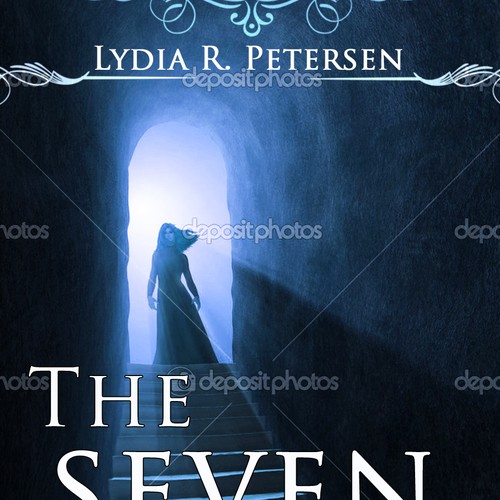 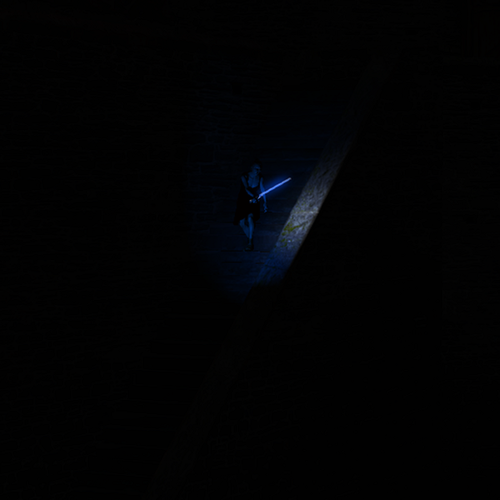 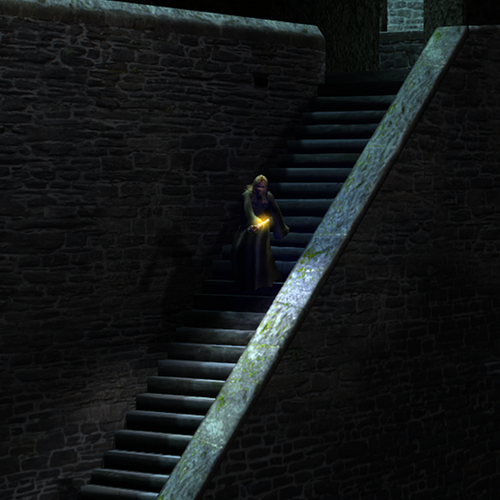 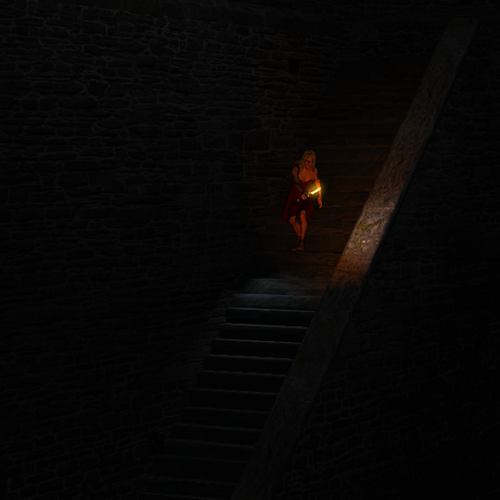 I am an authoress who writes fantasy novels for YA readers.

I need a book cover for my second book, entitled "The Seven Pawns". I loved what was done for the first cover so I am looking for something in that same style. (I'll provide a photo of the first cover)

I don't want a close up of the characters. I like the character's appearances to be left to the reader's imagination. Another thing that I do not want in the cover is a chess board. I know the word "pawns" could make it tempting to use a chess board as the central piece of the cover but I like my book covers to be based off of scenes from the novel. With that being said, I am providing two scenes to choose from the book to base the cover off of.

Scene One:
She walked quietly to it, her fingers twitching with tension. She cast another cautionary glance around before she knelt to the cool, hard ground. Her hands, slick with a nervous sweat, tightened around the metal handle. With all the strength she had in her arms, she heaved and pulled the heavy trapdoor upwards.

A cold blast of air blew up against her, making her jump back against the wall. When it subsided into a chilly breeze, she peered down. The start of a set of metal stairs lay three feet below her. Athelia bit her lip, thinking for a moment, and then with another deep breath, she sprang down into the darkness.

It would have been pitch black if it weren’t for the moonlight still shining through the open door. Athelia gave it one longing look and then began her journey down the freezing stair case. As she went down, down, down, farther and farther from the opening of the trap door, it grew all the darker until Athelia could not see her hand in front of her face. She tried to walk in the darkness for a few moments more but she stumbled. There was no choice but for her to light her dagger.

Apprehension squeezed her stomach mercilessly as the dagger and Piper lit her path. Her hands were shaking slightly both from the cold and the sheer tension that was making her head ache. She kept stepping down, listening for anything that would give her a clue to what she wasn about to walk into.

The stillness warned her of unseen dangers. This had all been too easy, too safe. Therenwas something coming. She could feel it as a monster senses its prey. Bits of hay started appearing on the steps beneath her feet. Athelia squinted down and she thought she could just see the outline of another circular room not too far below. She threw her cloak over the dagger, dimming it slightly as she went down the steps a little faster, and her breath quickening. A muffled groan faintly reached her ears and she thought it sounded like Jason. Suddenly, there was hard ground beneath her feet and the air around her seemed to change slightly. Athelia lifted her dagger out from under her cloak, blinking as her eyes adjusted to the brightness.

It was too hard to make out at first but eventually she could see huddled forms chained to the walls. She scanned them, looking for Jason and then… well, then she saw him.

He was straining against his chains, mouth gagged, and his face bloody. His head shook wildly, his wide eyes screaming out a warning that he could not voice and then-

***I like the idea of a sort of "scene look" where you can see a figure walking down a staircase with a glowing dagger. The staircase is very high up and steep. Perhaps even adding the outlines of prisoners below? Nothing "gory", just suspenseful.***

Scene Two:
And then a scream rent the air, ricocheting off the fragile ice, ripping through the silence that had been shielding them. Athelia sat straight up, grabbing Philip, wincing as she distinctly heard a crack in the distance.

Nameless let out a low curse under his breath, listening intently. Abrax and Aife were sitting up as well, Aife’s forehead resting on Abrax’s shoulder, her eyes tightly closed. Another crack, another crack, and then…

Athelia was flung forward, facedown into the cart as the polar bear roared and sprinted forward. She pushed herself back up, scooting hurriedly back until she was pressing against the back of the cart. They bounced wildly in the air and Athelia cried out as they slammed back down, the impact jarring her spine. She put her hand on Jason’s head trying to keep it from hitting down too hard and in her other arm, she cradled Philip close. He was awake again, his eyes wide with terror and his little chest heaving up and down, the sharp pained cries sounding
again.

Athelia looked up and screamed so loudly that it could be hear above the roar. Not twenty feet away from their cart, the icy walls were falling down, a white cloud of death plummeting down. The icy mist slammed into them, cutting their cheeks with vicious intent.

Ursus was going faster than he had possibly ever gone before. Nameless was shouting at him, desperation in his voice. Aife was quivering, clinging to Abrax who couldn’t seem to take his eyes off the landslide of ice that was pursuing them all the way down the valley.

“Not fast enough.” Athelia murmured wildly, watching the ice that was now a mere ten feet away.

The roar was deafening now, so close, she could have reached out and touched the icy destruction. It was like watching towers fall, imploding on themselves in a cold, beautiful rage.

“So this is what it feels like to watch death when it’s five feet away.” Athelia thought, her body numb with dread and chill.

Ursus roared out, putting on another blinding burst of speed. The cart flew up high in the air, turned on its side, nearly spilling its occupants onto the ground. Athelia screamed again and again, clinging desperately to Philip and bracing her back against Jason, trying to keep them both safe. Barra and Enya were yelling out, hanging half off the cart, holding onto anything they could get their hands on. Abrax and Aife were curled up against the railing, one inch away from a long fall. The cart was falling, falling, falling, simply refusing to right itself.

Then they slammed back against the ground, the cart hurling them like a sling shot onto the icy ground. It was jumble of noises and movements, all in a few quick seconds. Athelia, with Philip still in her arms, and Jason beside her fell down together, landing ten feet away from the cart. There was white flash in her head on impact and then complete darkness, but she could still hear everything around her. She heard Aife cry out and Abrax grunt as they hit the ground, a few feet away from her. Nameless was silent, but Ursus gave a high, pain filled whine. The roar of the avalanche had dimmed, and as they weren’t buried in snow, Athelia could only assume they were out of Avalanche Valley.

***For this option, I would like a "scene". Like a bird's eye view of the cart trying to get out of Avalanche Valley with the avalanche right behind them***

I am looking forward to seeing what you amazing artists come up with! Thank you for bringing my imagination to life.