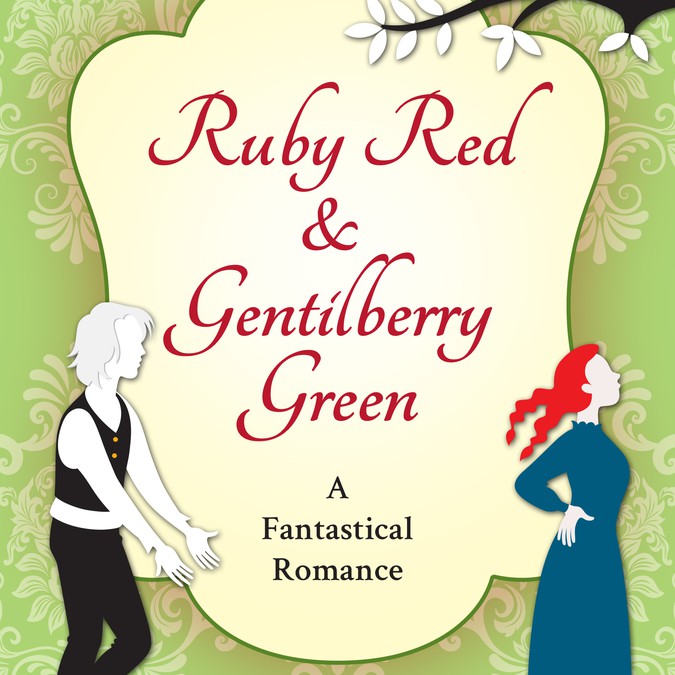 Create A Book Cover For A Whimsical Romantic Fantasy 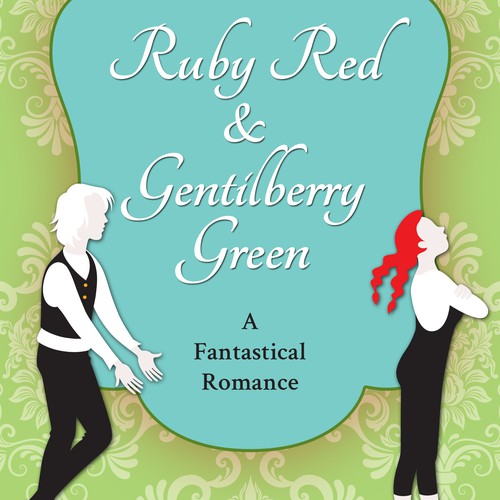 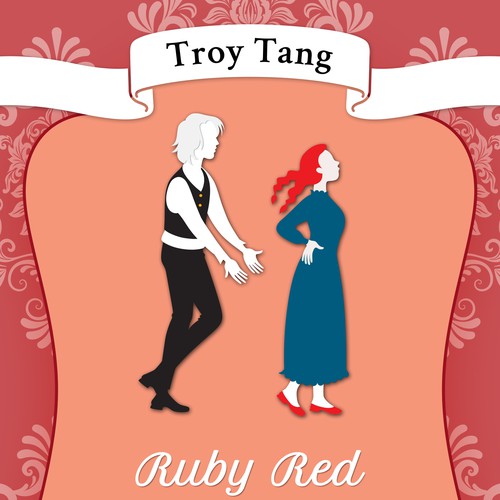 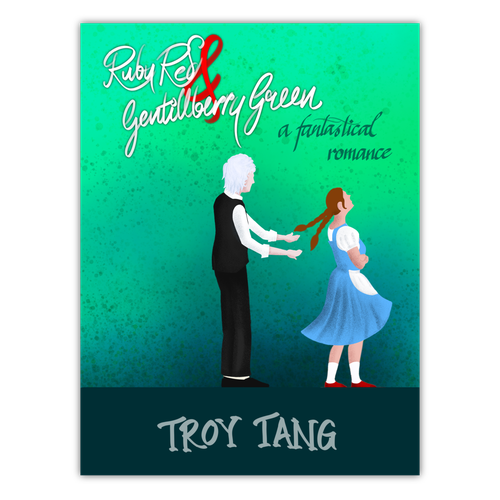 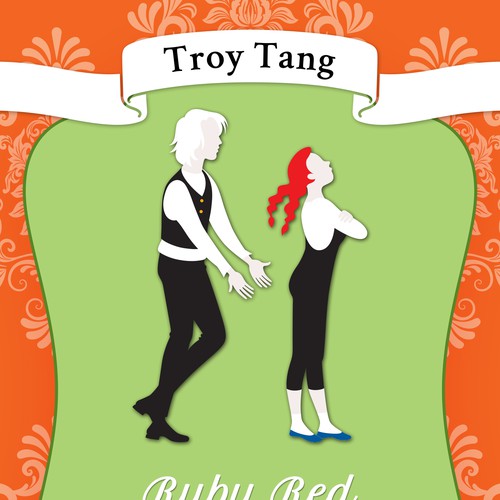 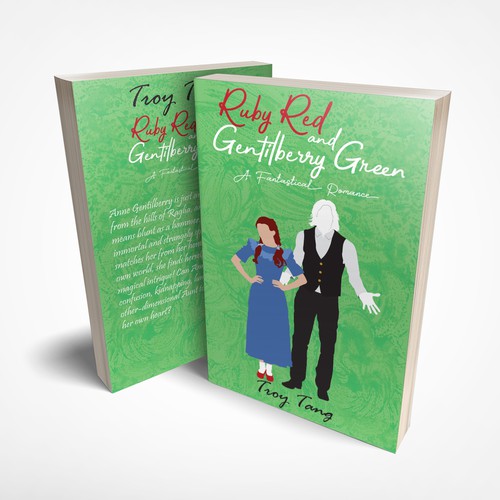 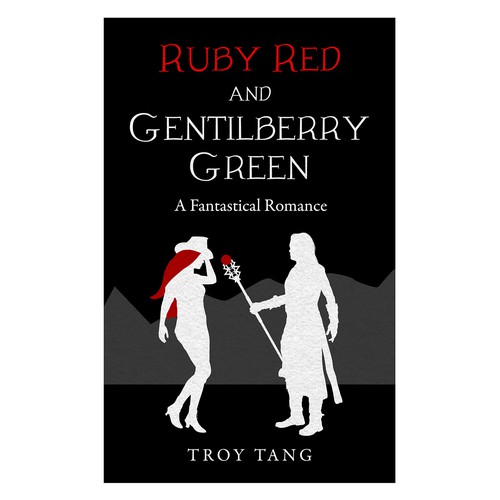 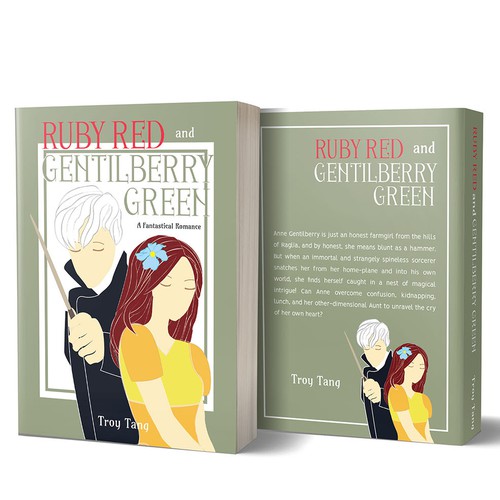 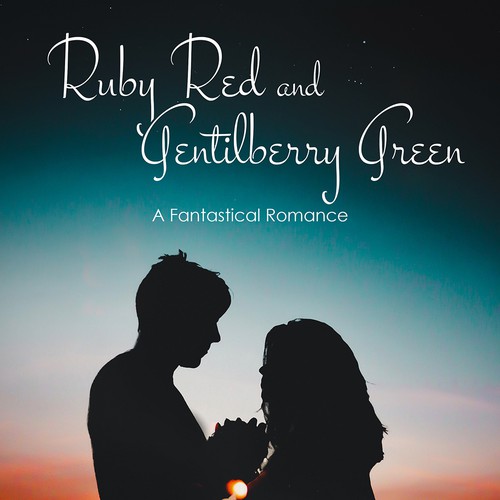 Troy Tang is a mild-mannered individual who currently stalks the wilds of Auckland, New Zealand in search of sustenance. If found, please return.

A whimsical romance with heavy fantasy elements, between a white-haired sorcerer and a red-headed farmgirl. Anne Gentilberry is spirited away from her quiet farm life one fine day, only to find that her kidnapper is the most lily-livered immortal to ever exist. Not only that, but it seems he has some history with her family. Will she be able to overcome her annoyance in time to get to the bottom of this kerfuffle?

Lovers of both romance and fantasy, with the willingness to put clues together and the patience for extended stretches of dialogue. Neither males nor females in mind. There is no adult content save some mild violence.

The overall mood of the image is magical and whimsical, highly stylized, with solid bright colors, a charming modern look, and clean lines - two pastel silhouettes take center stage. Their striking clothes are illuminated in full, but their eyes are not to be seen. One is a tall young man with snow-white skin, clad in a white shirt, a disheveled black waistcoat with three gold buttons and black pants, with snow-white hair that reaches to his neck. His attitude is one of slight befuddlement, and his arms are entreatingly spread. The other is a Caucasian farmgirl in a blue calico dress, white socks and red shoes, complete with twin red braids - think Dorothy of Oz and Anne of Green Gables, only grown up and mashed together with plenty of pepper. She is facing away from him with her arms folded, in a petulant huff, her plaits flying.

The background should be vivid spring green (00E777). The title font should flow almost like white lace, with elegant loops and flourishes. The subtitle should be directly underneath and in a similar font, but also prominent. Ruby red should also be part of the scheme, although the use of the color should be sparing so as not to suggest Christmas. If a white embroidered owl can be incorporated above the title, that would be fantastic.

The image should be of suitable proportions to be seen clearly on an Amazon page, but of sufficient resolution to serve as a printed book cover if necessary.

Designers are invited to change one or more elements if it will serve their vision.

Beautiful BB cover for a SURVIVOR
299 $
Adult Women
154
entries
32
Designer
Electrical AC circuit theory workbook
299 $
students, electrical engineers, technicians, etc
121
entries
11
Designer
Testing Idea
299 $US
20
entries
8
designer graphistes
Book cover for non-fiction
$199
People who suspect they have a narcissist in their life and are looking to get it confirmed.
225
entries
19
diseñadores
Stormy, Suburban Neighborhood Cover needed for non-fiction novella. Thank you!
399 US$
Men and women ages 18 years old and up.
37
entries
10
diseñadores
Join my adventure in love & erotica. Design a hot cover for this intellectual romance.
US$ 399
Women or Men between 18 and 99. People who love to read erotica and steamy romance. The book is set in Portland, Oregon.
141
entries
26
designers