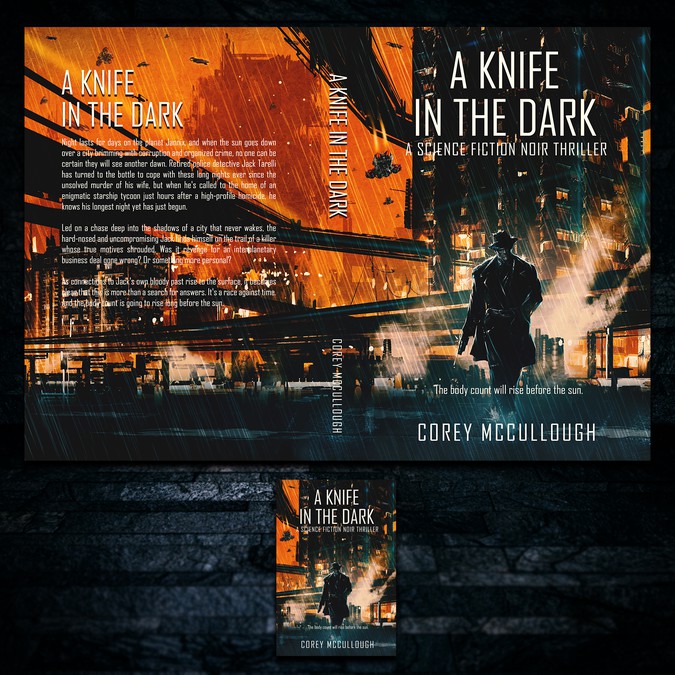 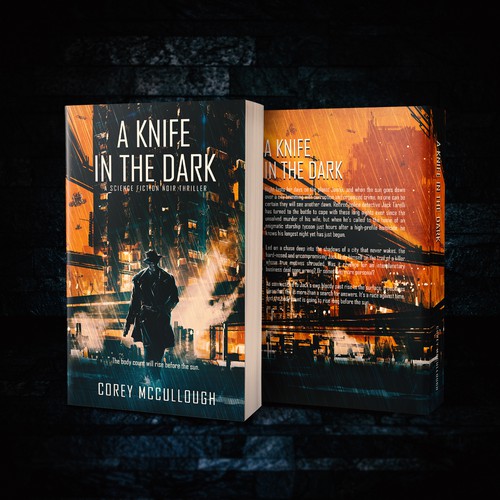 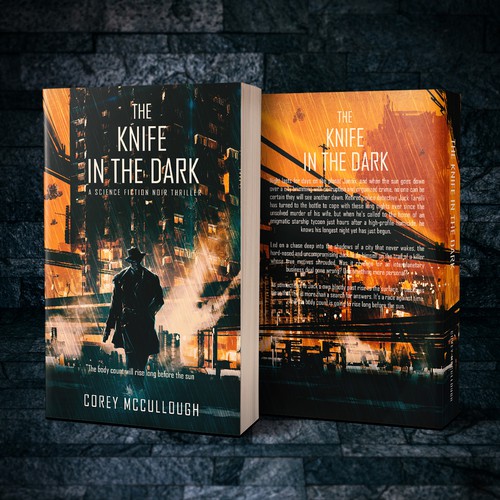 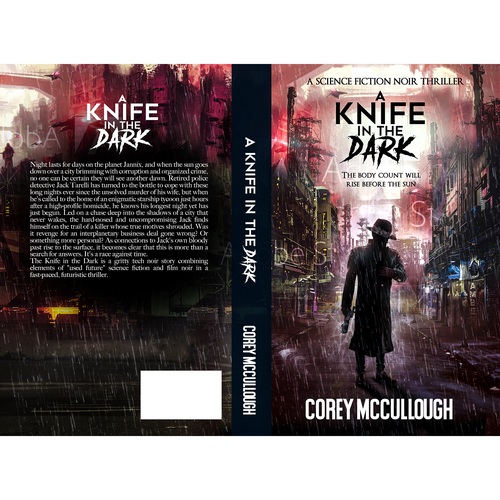 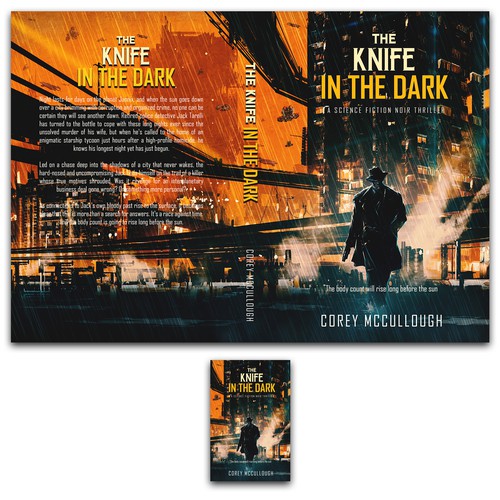 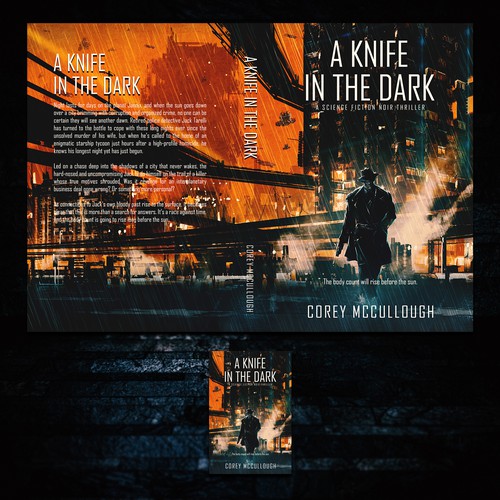 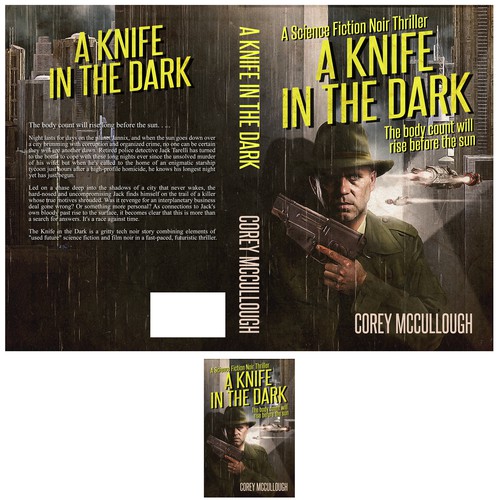 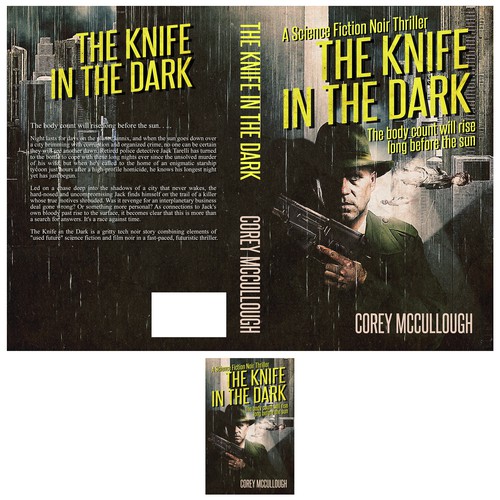 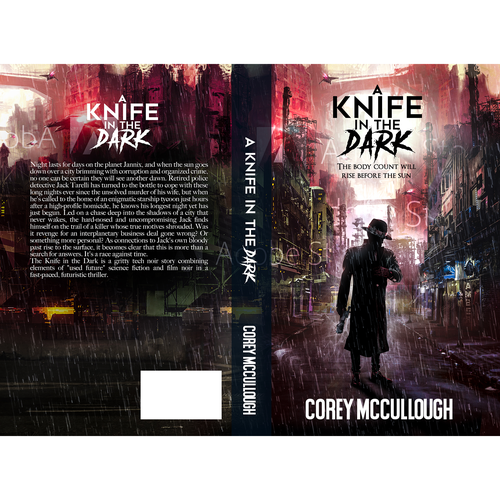 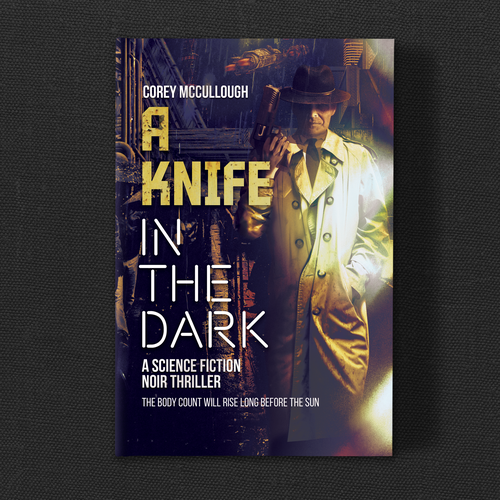 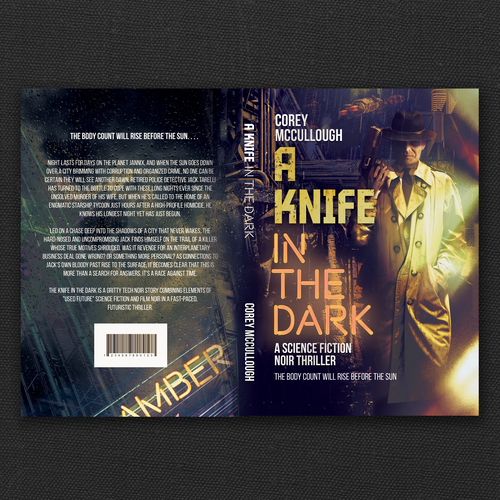 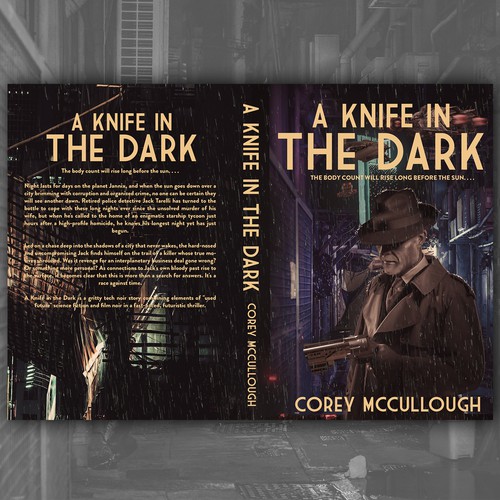 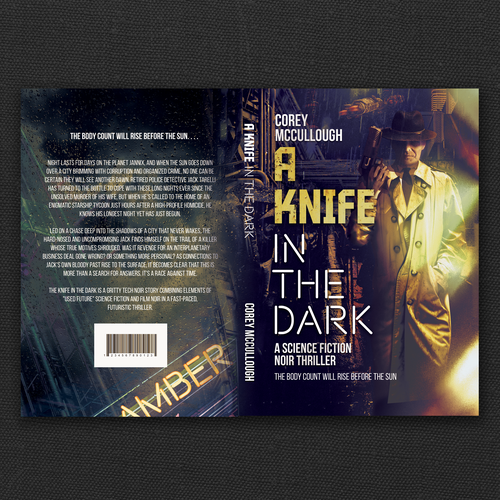 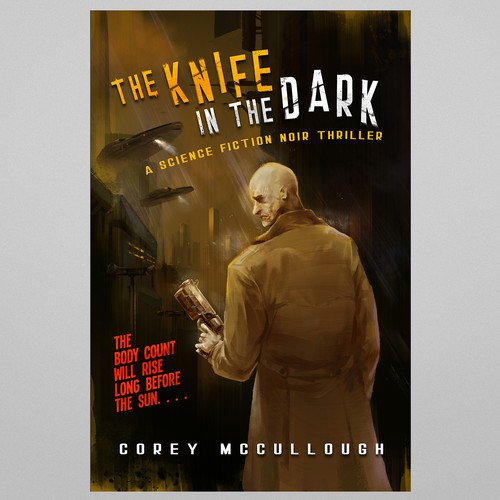 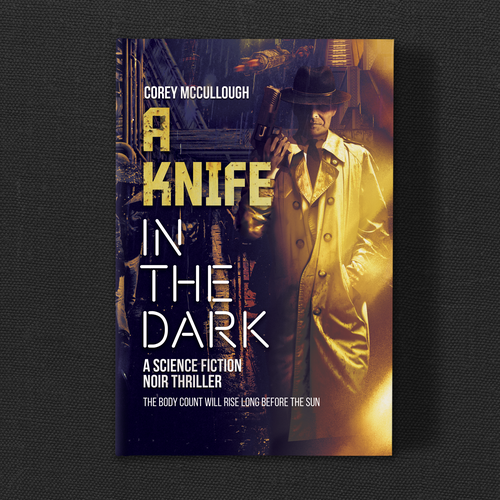 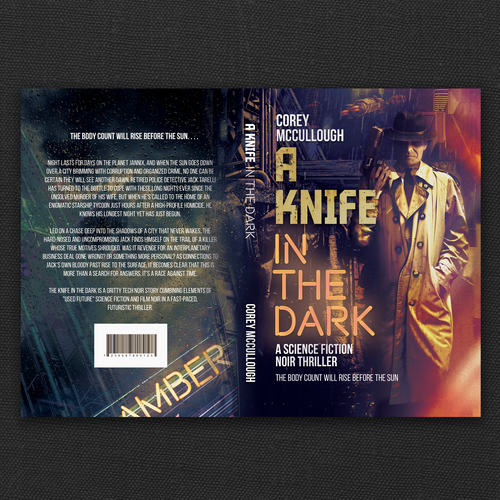 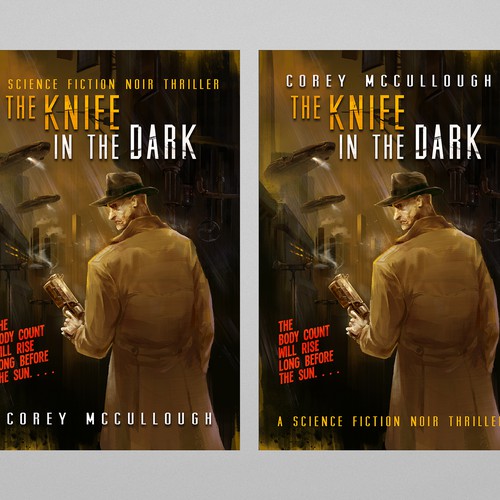 The Knife in the Dark

Night lasts for days on the planet Jannix, and when the sun goes down over a city brimming with corruption and organized crime, no one can be certain they will see another dawn. Retired police detective Jack Tarelli has turned to the bottle to cope with these long nights ever since the unsolved murder of his wife, but when he's called to the home of an enigmatic starship tycoon just hours after a high-profile homicide, he knows his longest night yet has just begun.

Led on a chase deep into the shadows of a city that never wakes, the hard-nosed and uncompromising Jack finds himself on the trail of a killer whose true motives shrouded. Was it revenge for an interplanetary business deal gone wrong? Or something more personal?

As connections to Jack's own bloody past rise to the surface, it becomes clear that this is more than a search for answers. It's a race against time. And the body count is going to rise long before the sun.

Adults and teenagers, mostly male. Probably ages 15/16 and up. There's a lot of guns, blood, and violence, but there's no sex, and no overly foul language.

This book was previously published under a different title with a different cover. I'm now rebranding it and rereleasing it, and I need to have four major elements executed well on this cover: (1) font (2) the main character (3) his gun (4) a city scene.

(1) The Font
This book is a combination between science fiction, private detective stories, and film noir. (Think "Blade Runner" or "Altered Carbon.") I would like the font to really reflect the film noir aspect. I've attached some examples of film noir movie posters.
You'll notice that these posters use varying directions and different shapes for their fonts, with big, blocky letters and bright colors. Some of them almost have a cartoonish sort of feel to them. I'd like to utilize that, as it clearly shows the intent of the book to be a noir story, and it draws an interesting contrast to the dark, gritty subject matter.

(2) The Main Character
The main character of this story is Jack Tarelli, retired police detective and war veteran with a drinking problem, who's currently working as a private investigator. Jack is:
- A white male
- Older (mid-60s)
- A big guy (six-foot-five)
- Muscular (fitness buff who uses futuristic supplements and stimulants to stay fit)
- Bald (shaved head)
- Clean-shaven, square jaw
- A rough-looking dude (grizzled, determined)
- Dressed in a suit and tie or a trench coat (he can be wearing a fedora but doesn't have to be)
I picture Jack as a combination between Humphrey Bogart, present-day Clint Eastwood, and Jet Black from the Cowboy Bebop series. I've attached some images for inspiration (but don't forget: he's bald and clean-shaven).
Jack should be in an action stance and holding his gun.
Showing him silhouetted or partially shadowed could work... if you can make it work.

(3) Jack's gun
Jack should be holding a handgun. A sci-fi pistol with a "used future" look.
Note: This is not a "blaster" or any sort of laser weapon. The firearms in his story use physical bullets that are artificially accelerated by the weapon itself.
Jack's gun should look like a beefed-up version of a handgun from our world. I've attached some examples. I like the idea of it looking kind of stout and boxy.
I've attached some images I like that you can use as inspiration. It doesn't have to be overly detailed or intricate. It just has to be visible, and it must be clear that it is a sci-fi weapon. It should look POWERFUL.

(4) City scene
The city scene does not have to be prominently displayed or overly detailed, but it should evoke the following:
- rainy (it rains through this whole book)
- grim
- futuristic but industrial (warehouses and factories beneath skyscrapers, dark neutral colors, possibly yellows to evoke the industrial feel)
- science fiction heavy (weirdly shaped buildings, spaceships overhead (possibly), and I wouldn't mind seeing some small craft such as flying cars in lanes in the sky)
I'm attaching some examples of sci-fi city scenes I like.

Overall, this cover could all be more photo-realistic, or it could be more abstract and artsy. I'm open to different ideas.
Please focus mainly on the character and his weapon. Jack can be on top of a building, holding his weapon, or peering around a corner with his gun raised, or aiming his weapon at something you can't quite see...
For anyone who's interested, I'd be happy to provide you with an ebook copy of the book for you to skim through to get a feel for the story. Send me a message if you're interested, and I'll send it over.

Concept is more important than detail.

I'm looking for an original look, non-clichéd, and again, heavy on the noir aspect (not as heavy on the thriller element).

These are all just ideas. Feel free to get creative. Ask questions! I will provide lots of feedback.

Jack's clothing should NOT indicate science fiction. He should look like he stepped straight out of 1940.

When it comes to the science fiction elements, avoid anything overly slick or shiny - I'm going for a gritty "used future" feel.