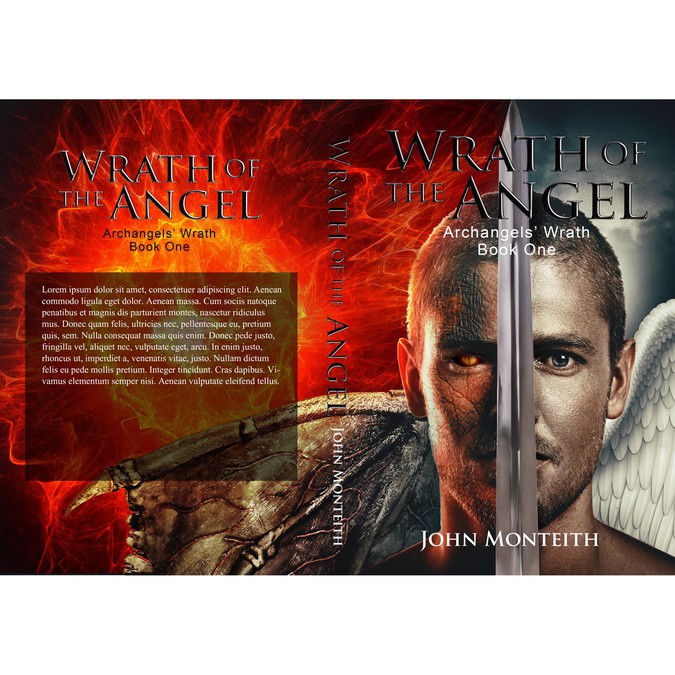 Create cover for books in a 3+ paranormal/religious novel series 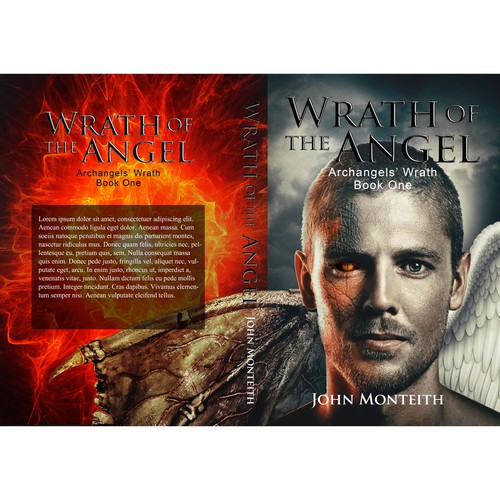 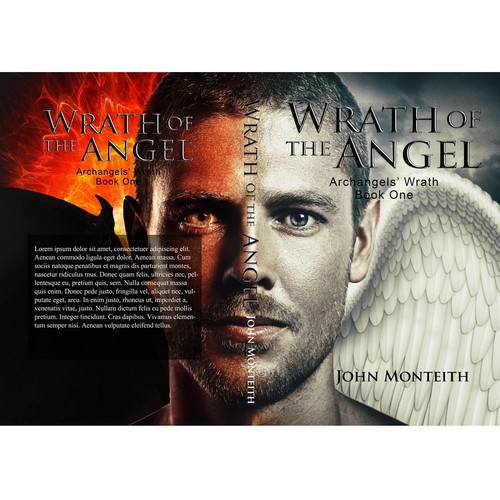 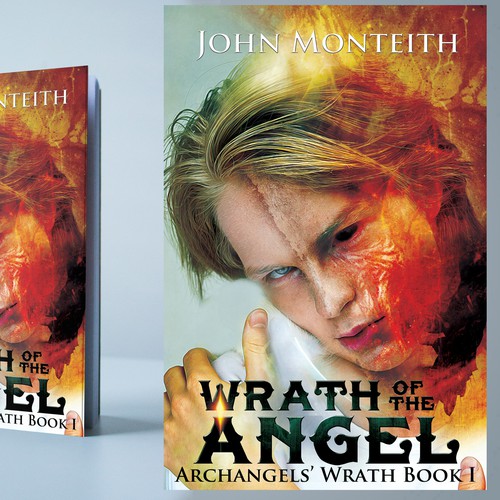 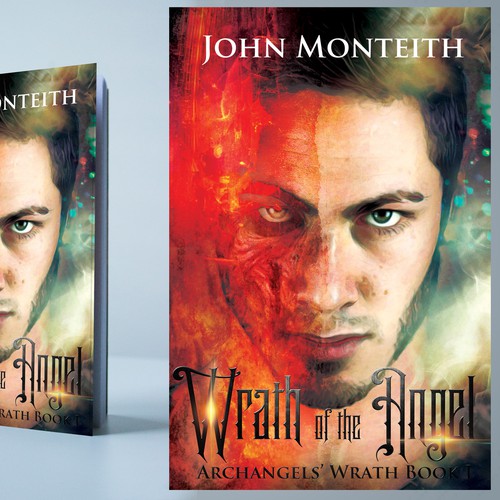 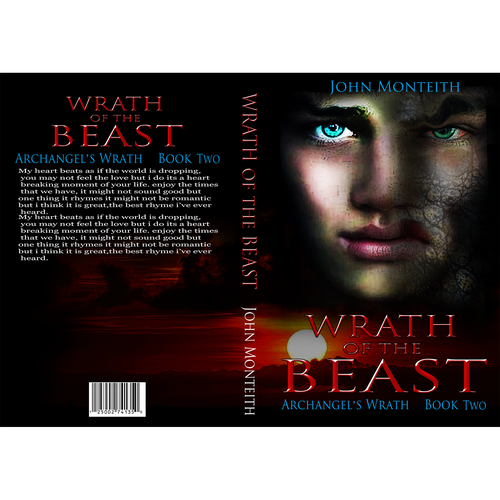 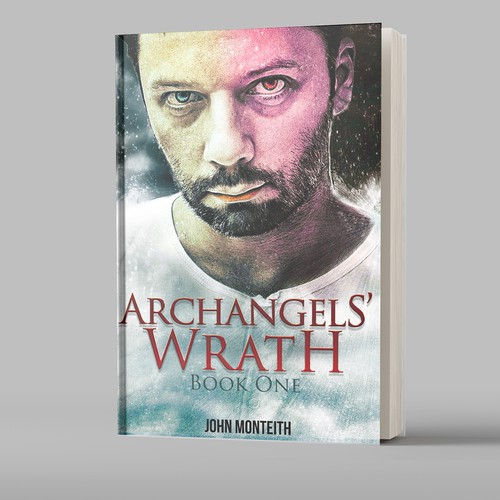 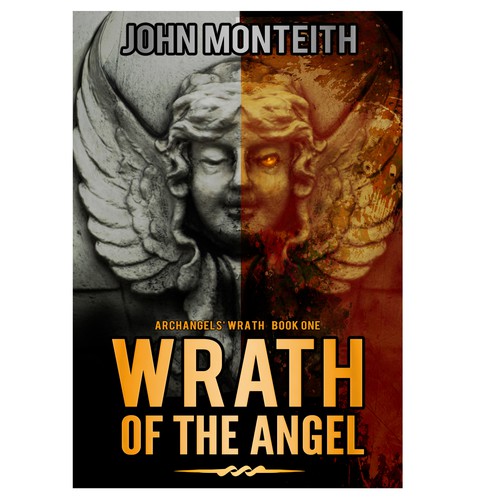 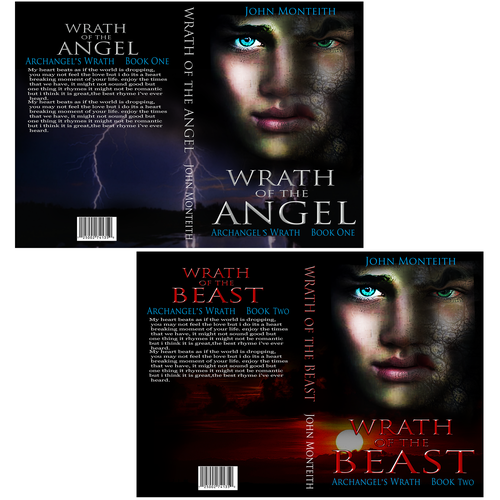 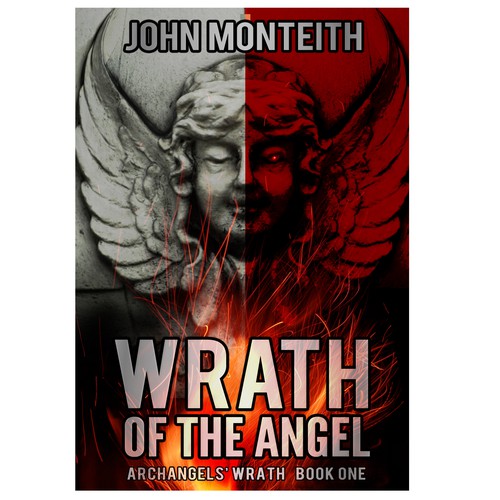 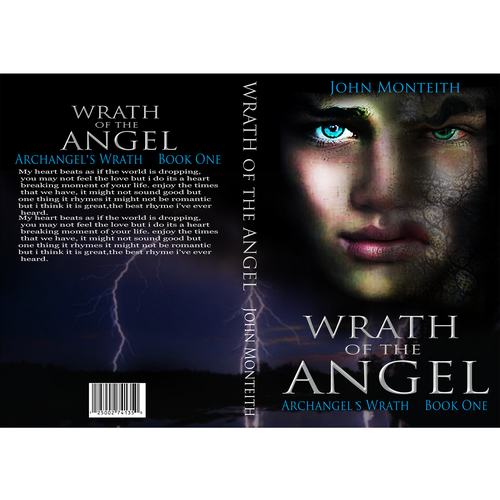 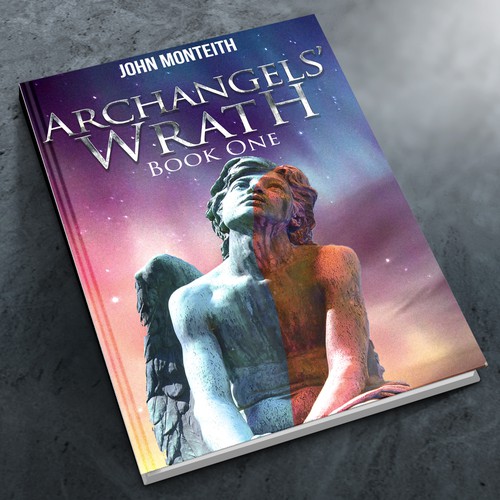 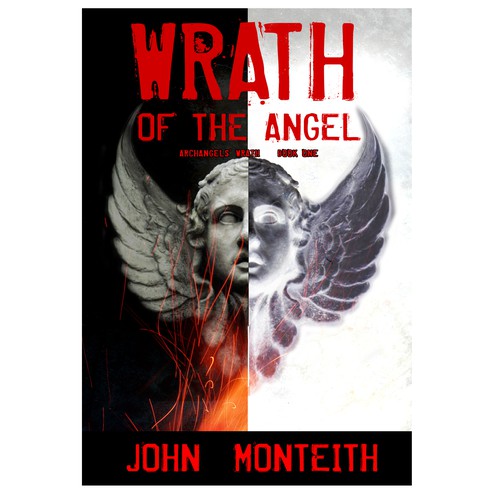 I’m creating a trilogy where a young scientist learns to take control of the minds of animals and then humans. He believes he is gifted and deserves to use his power–mainly for good, but however he pleases. The other main character, a wounded soldier who becomes a priest and then an exorcist, believes the scientist is oppressed by demons and needs angelic help.

I want the cover to be the same for all books except for the background color, title text, the text calling out the volume of the book, and the back cover synopsis.

The primary image on the front cover should be the face of an angel. I want to split his face in half down the middle. On the left half (as seen while facing the cover), I want an angelic image. On the other half, I want a demonic image. But I want it obvious that it’s just one angel. It could be a fallen angel (i.e. a demon) , where the left half represents him before the fall. Or it could be one of God’s angels, where the right half represents him administering the wrath of final judgment. If you can achieve this with a single expression across the angel’s complete face, that’s great but not necessary. I also want the angel to be handsome.

You’re free to experiment with images of the two main characters on the front or the back covers. They do confront each other in the stories. So you can show them interacting if you want. Somewhere on the cover I also want the volume of the book (Archangels’ Wrath Book One/Two/Three). On the back cover, there will be 125-200 words for the synopsis.

The prize for this contest applies to all three books. For simplicity, you can show me just the first book in the early stage as long as you have an idea for a color scheme that works for all three books as we progress in the contest.

Comienza ahora
Book Cover - need creative interpretation of title and subtitle
US$ 299
Christian Women ages 30+
136
entries
28
diseñadores
Personal finance book to appeal to single, young men.
529 $
Young men between the ages of 20 to 40. They may be working jobs they don't like, not be in a financial position they ar
88
entries
24
Designer
Design a book cover about a high profile murder trial
$199
Lawyer and lay folks from high school thru retirement who want to know how the prosecutors and the justice system failed
36
entries
16
diseñadores
Shallow Water Romance
USD 749
Usually, women between the ages of 18 and 60.
295
entries
78
diseñadores
Professional cover for a business book
$ 199
Target audience: Male Aged between 20-35 USA People currently working a day job
149
entries
28
Designer
Book cover for non-fiction
$199
People who want to be prepared when SHTF.
84
entries
10
デザイナー数
Más información sobre diseño de portada de libro o revista
Vea como funciona