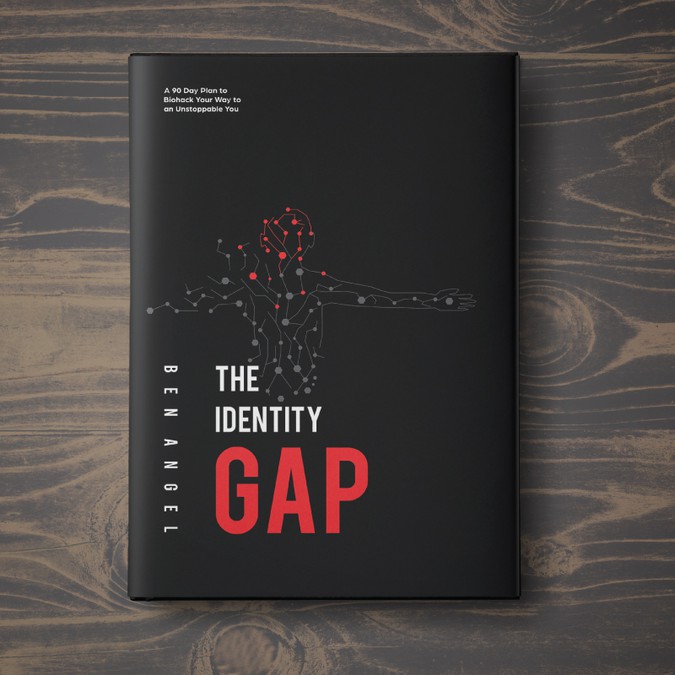 Create the cover for the next bestselling book! 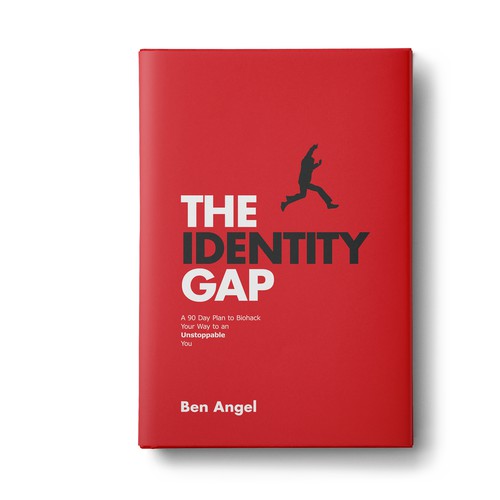 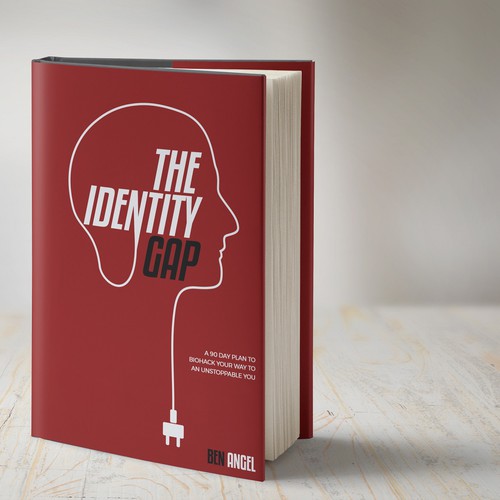 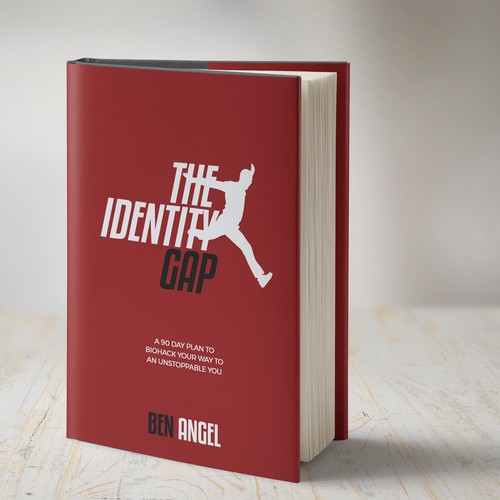 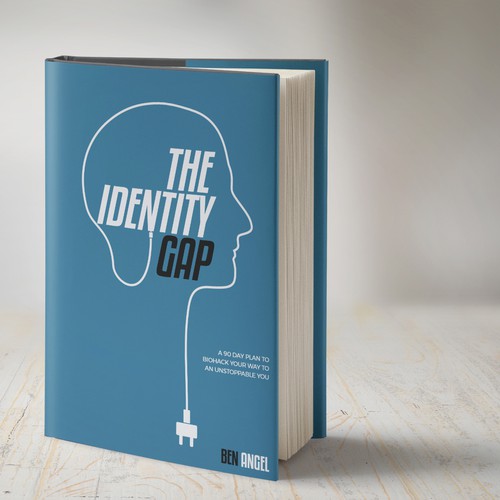 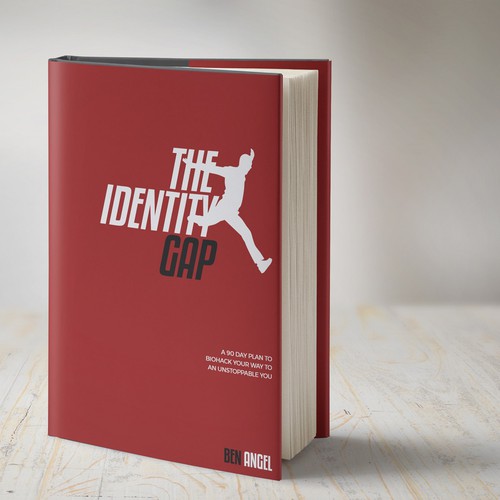 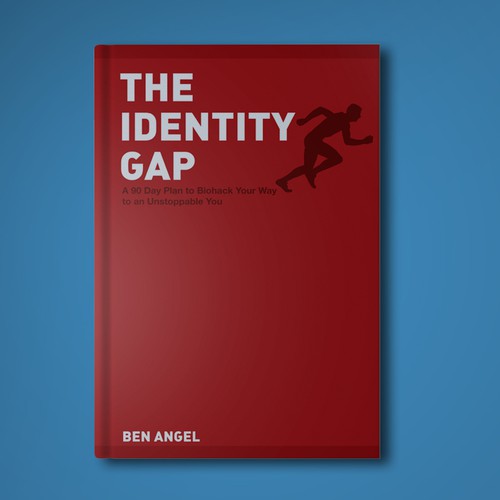 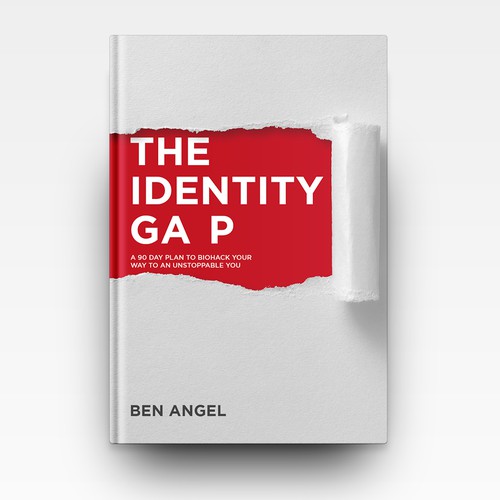 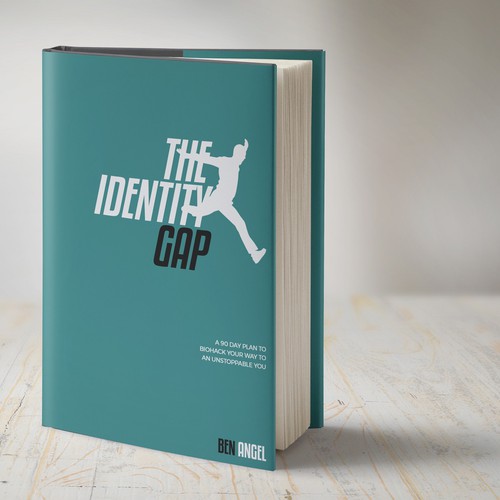 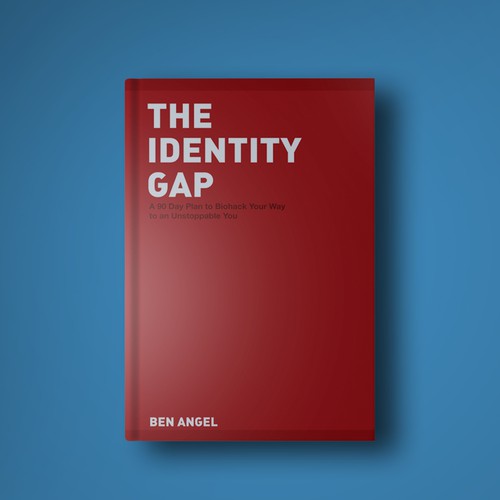 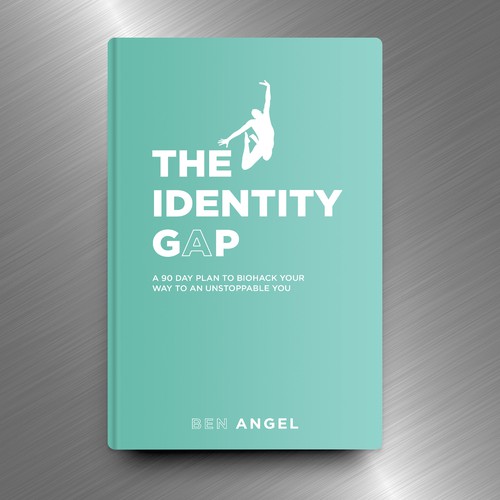 Ben Angel, author of CLICK and Flee 9-5, is one of Australia's leading marketing and personal development authorities. Followed by over 200,000 internationally, his books, short films & online courses will help you live an unleashed life.

What does it really take to become unstoppable?
It’s not what you think...

In The Identity Gap, bestselling author Ben Angel sets out on a 13-week mission to becoming unstoppable. Unable to overcome debilitating fatigue and depression since his teens, Ben delves into the world of biohacking, neuroscience, and psychology to close the gap from who he was to who he needs to become to reach his goals.

He leaves Australia and travels to America, Canada, and Silicon Valley to find answers. By visiting the world’s top biohackers, neuroscientists, and microbiome experts, Ben uncovers what’s really at play. What he finds is shocking. He discovers food sensitivities, nutritional deficiencies, social media addiction, and medications are dulling people’s motivation on a global scale. These biological hurdles rob them of their ability to achieve success and get blamed on them and a lack of willpower, instead of the cause, and they don’t even know it!

But, what if excuses were a result of very real, physical symptoms and not simply a poor mental attitude? Going to extreme lengths, Ben walks across hot coals, tests supplements, trials smart drugs, and uses wearable technology used by the military and Olympics athletes. He undergoes various laboratory testing to get to the bottom of what influences people’s mood and behavior in the modern world.

A paradigm shift decades in the making, Ben creates a brand new groundbreaking 13-week program to achieving success that will help anyone who has ever believed that they’re not good enough or has failed to reach their goals. He reveals the 4 unique identities; The Catalyst, Synergist, Guardian, and Defender that go beyond simple personality testing, to a biohacking method that precisely explains, once and for all, why success is easily grasped by some, and out of reach for others.

The question now is, what is your “Identity Gap?”

The audiences of the following authors;

A bold cover that grabs you by the eyeballs and makes you ask, "what is this book about?"

I like modern bold fonts, especially for the book title. I'm leaning towards a strong red color that has the title in bold on the far left in white.

At the bottom of the front or back cover, I like the idea of a man coming out of the wall in 4 stages.

**** See file attached for style of man to be used. It's nice and clean. I'm thinking if the color is a strong red, then he needs to be white/black.

See attached image. This will give you an idea of what I mean. This needs to be very simple and clean however like the attached example. Can be along the bottom of the front cover / the back. Depending on what looks right.

Avoid complex designs that are too busy. Imagine working into a bookstore and seeing this stand out.

Book cover for non-fiction
US$ 199
People who suspect they have a narcissist in their life and are looking to get it confirmed.
225
entries
19
designers
Book cover for a hilarious book about cats
US$ 399
People in their late 20s and 30s; people who love cats and cat memes; people who love crime novels; people who love hist
60
entries
22
designers
YA Romance cover
199 USD
Teen to adult
104
entries
27
designer
The Silver Waterfall
399 US$
Typically men, typically 18 years and older. Readers of military fiction and action/adventure. Readers of military histo
142
entries
15
designers
Book Cover - "A Brave Heart by William Wallace", a memoir of recovering from traumatic ski accident
US$ 1.199
The book is for people who have been dealt a serious setback in life and are looking for motivation or guidance on how t
125
entries
16
designers
Science, Faith and Scientists
US$ 299
Advanced high school and college students, practicing people in the STEM areas, and anyone with an interest in the curre
42
entries
14
designers

Comienza ahora
Book Cover For Book
US$299
Entrepreneur, Professionals
94
entries
17
diseñadores
Cover for Fantastic Thriller in the same line as PRISONERS / Couverture pour Thriller Fantastique
€ 359
25 - 55 years old, fans of thrillers, movies, TV shows, comics, adventure video games, fans of Jean-Christophe Grangé, S
124
entries
27
designers
Coming Out with Christ - (A Spiritual Journey To Finding My Resurrected Identity)
USD 399
“A must-read life story of love and grace for our LGBTQ people, and every pastor, church leader, Christian, family membe
81
entries
17
diseñadores
Classy cover for a memoir. A woman discovers a family secret; her real father was a priest.
499 US$
Classified as memoir, I see my audience as women, middle aged plus. Women interested in family relationships and the inh
158
entries
38
diseñadores
Business book cover needed, themed around phenix and unicorn.
499 US$
Young passionate enterpreneurs both male and female, aged between 18 - 40. Keen to build their own businesses. Target ge
161
entries
42
diseñadores
paper back and ebook cover
£ 319
Someone is reading this book to learn the most effective way to write a to-do list that will keep them motivated and pro
51
entries
20
Designer
Más información sobre diseño de portada de libro o revista
Vea como funciona