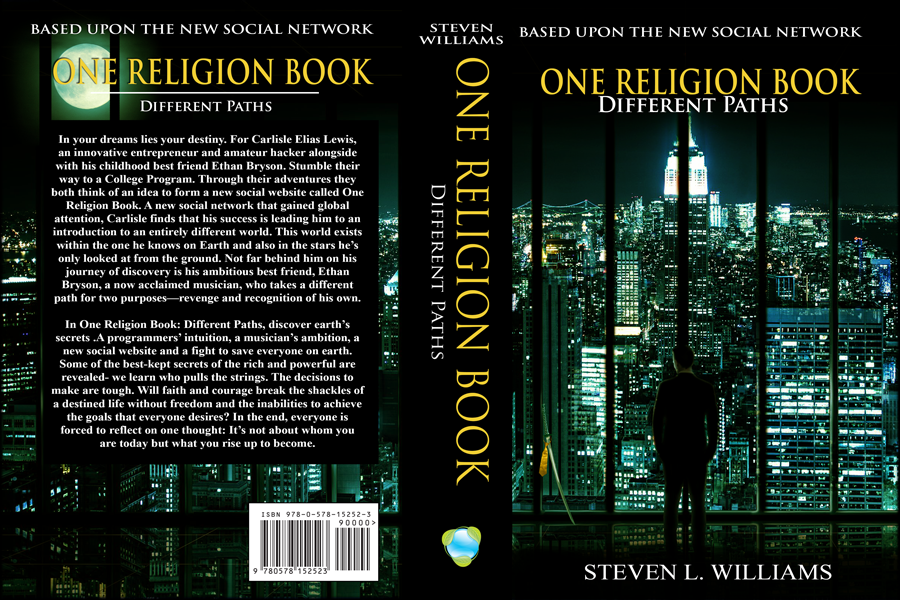 Create a "" EPIC BOOK COVER "" to be remembered forever !! 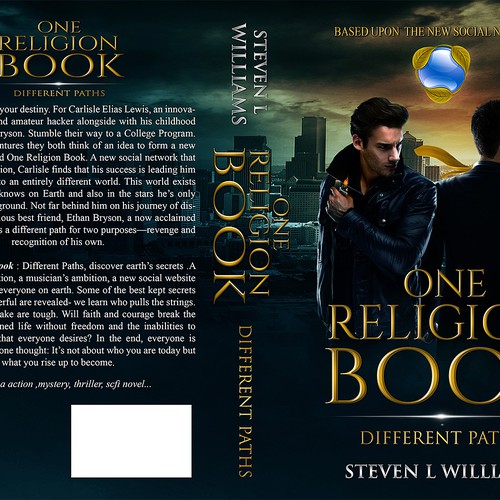 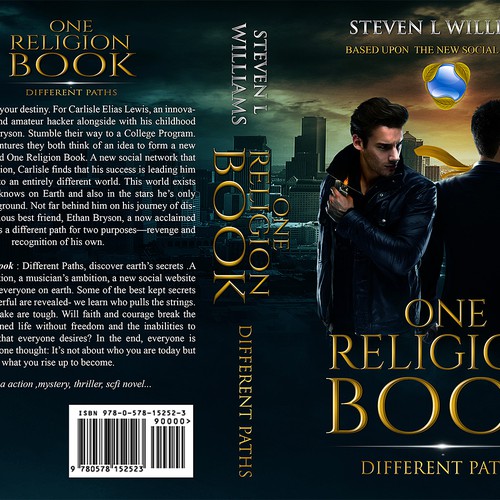 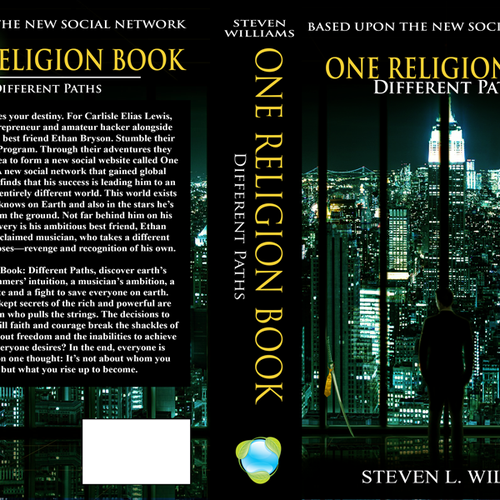 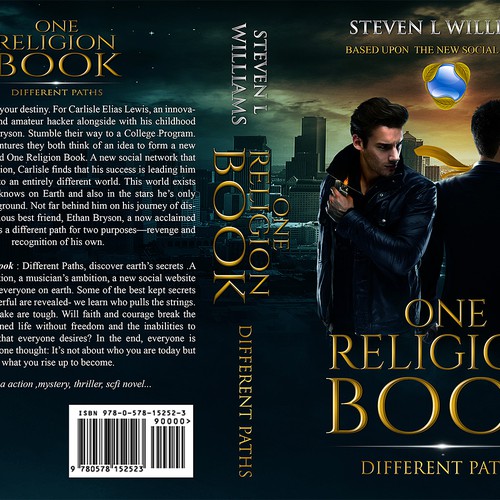 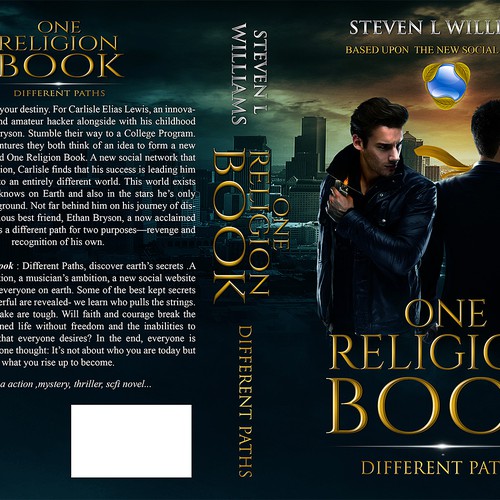 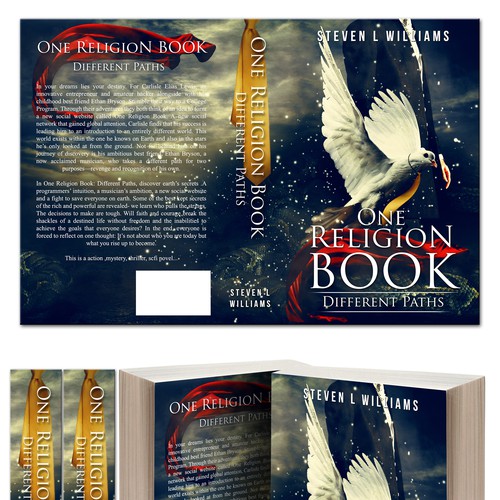 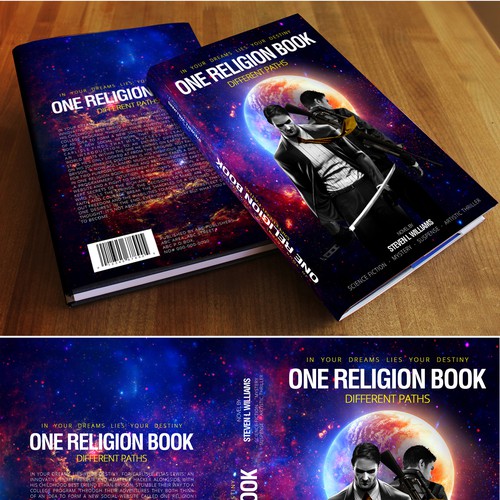 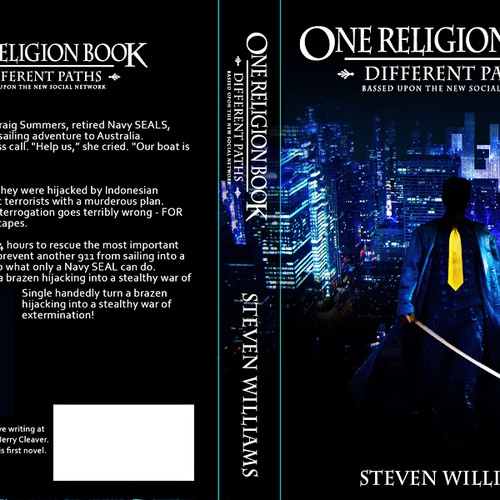 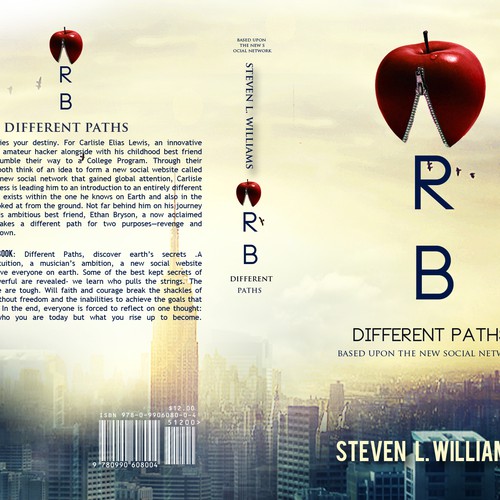 I am a author and creator of one religion book.My target audience are young adults 16-29 that are in to scfi ,mystery ,drama, suspense .

In your dreams lies your destiny. For Carlisle Elias Lewis, an innovative entrepreneur and amateur hacker alongside with his childhood best friend Ethan Bryson. Stumble their way to a College Program. Through their adventures they both think of an idea to form a new social website called One Religion Book. A new social network that gained global attention, Carlisle finds that his success is leading him to an introduction to an entirely different world. This world exists within the one he knows on Earth and also in the stars he’s only looked at from the ground. Not far behind him on his journey of discovery is his ambitious best friend, Ethan Bryson, a now acclaimed musician, who takes a different path for two purposes—revenge and recognition of his own.
In One Religion Book: Different Paths, discover earth’s secrets .A programmers’ intuition, a musician’s ambition, a new social website and a fight to save everyone on earth. Some of the best kept secrets of the rich and powerful are revealed- we learn who pulls the strings. The decisions to make are tough. Will faith and courage break the shackles of a destined life without freedom and the inabilities to achieve the goals that everyone desires? In the end, everyone is forced to reflect on one thought: It’s not about who you are today but what you rise up to become.

This is a action ,mystery, thriller, scfi novel...

Hello. We are looking for a book cover for this epic novel.

You are free to be creative, so here are a few points to consider about the book;

1.Imagery must pop. We like the look of blue clouds ( Sky ),the items you can put in are a golden tie ,matte lighter and apple .You can either put all, two or none but feel free to be creative. Our a young guy in a suit with his gold tie holding it and guy shadowed in black with a lighter. I like the colors blue , black and reddish orange (fire) and gold.

2.Cover design must flow (see The Way of Shadows by brent weeks) . Not choppy, but flowing.

3.Words on cover are strong and stand out from a distance (so it pops online in small thumbnail).

2.Back must include: room for blurb, 231 word description, ISBN barcode, publisher logo (we will provide all of these items once final design is chosen, so please use placeholders for now.

3.Side should include: Title, Author and publisher logo

4. The cover needs to be designed to Createspace and Lightning Source specifications for 8.2 x 5.4 x 1.5 inches .We will also need a version for Kindle, .mobi and pdf.

5.Thank you in advance for your design ideas...

Design and Illustration with sweet typeface for Vancouver Book Cover
CAD 399
North American Men and Women aged 19-54 who are into music, foodie culture, stand-up comedy, dark humor, indie films, ar
59
entries
9
diseñadores
Cavities No More
529 CA$
The book is primarily aimed at parents of young children. Anyone involved with the care of children. Nurses, public heal
95
entries
25
Designer
Elemental Samurai Superhero adventure for 90s kids
US$ 299
This story and the other books in this series are written for "old millennials." The generation of kids who grew up with
47
entries
16
designers
Fairytale Retellings - a rebrand for a four-book series, starting with an Aladdin retelling!
US$ 329
young adult story, anyone who enjoys aladdin retellings, but aimed at teens, specifically girls.
56
entries
22
designers
Design a book cover about a high profile murder trial
USD 199
Lawyer and lay folks from high school thru retirement who want to know how the prosecutors and the justice system failed
36
entries
16
diseñadores
Design book cover in Russian
299 $
Most of the readers are well educated women 30-50 age old, with interest in self-help, psychology, spirituality and New
34
entries
5
Designer

Comienza ahora
A man who is a business man by day and gangster at night. Show the man's duality.
$ 399
Ages 18 to 65, both black and white, male and female from the inner city to suburbia. This book has violence, romance an
21
entries
4
Designer
Design a feminine premium front cover for a budget planner
$499
women 25+ y.o. US-based
64
entries
11
デザイナー数
Design an eBook cover for IT geeks and cloud computing experts
329 $
IT system administrators, software developers, DevOps professionals, mostly male, 25-40 mainly from the US and Europe.
88
entries
19
Designer
Book Cover For New Author
299 $US
Fiction readers who want a "feel-good" reading experience unpunctuated by excessive vulgarity or foul language. Female r
52
entries
20
designer graphistes
Book cover needed for ultimate fan guide to the Fast and Furious movie franchise.
749 $
Fans of the "Fast and Furious" movie franchise. These movies are consumed by a massive global audience, ranging in age a
110
entries
37
Designer
Design the cover of a book about the healing power of God
US$ 399
Christians who are tired of being sick and want to receive the healing power of God.
43
entries
19
designers
Más información sobre diseño de portada de libro o revista
Vea como funciona