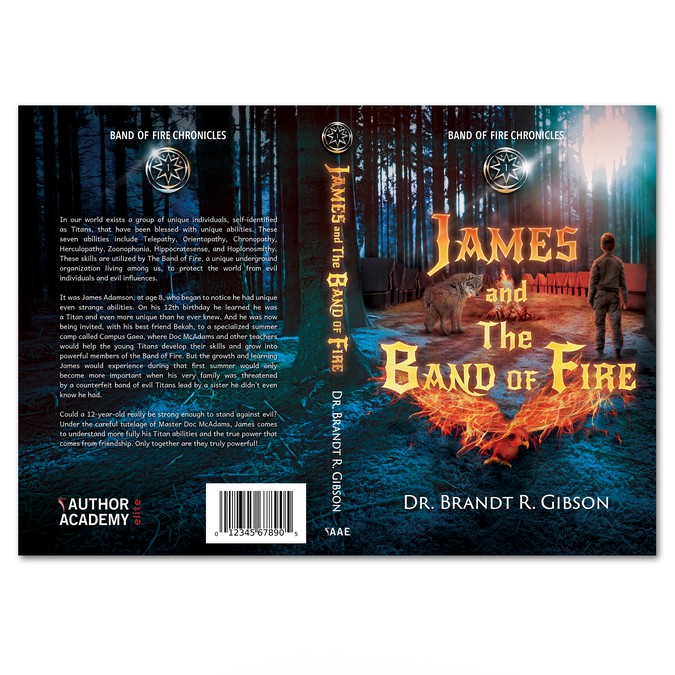 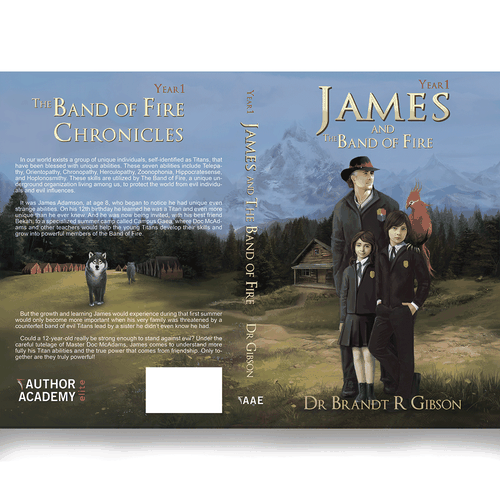 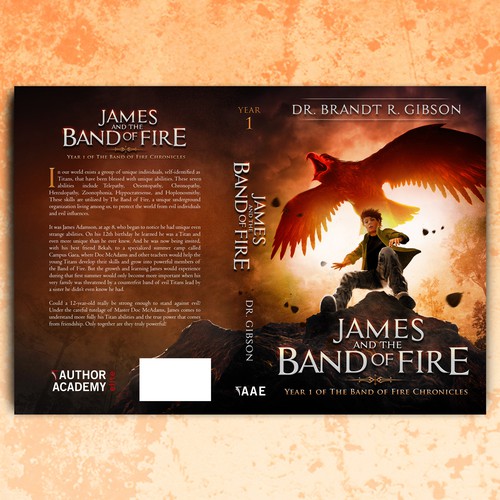 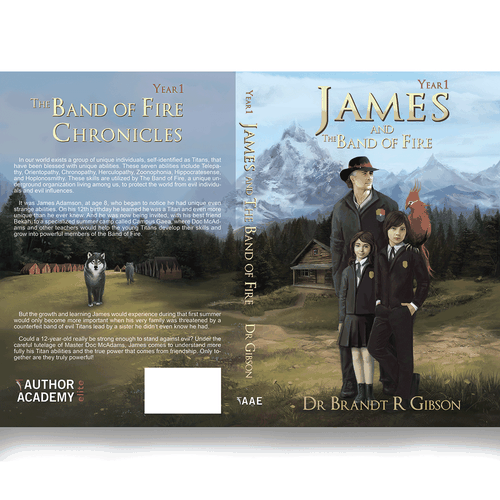 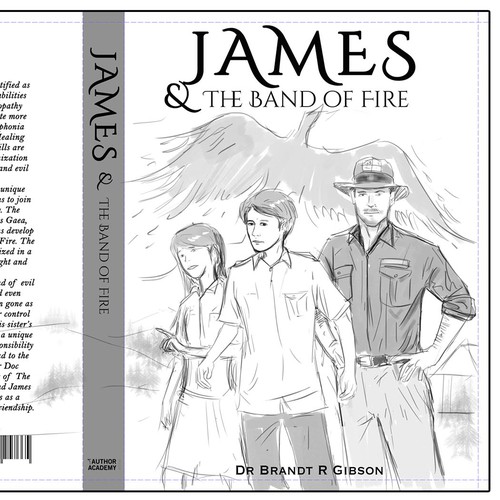 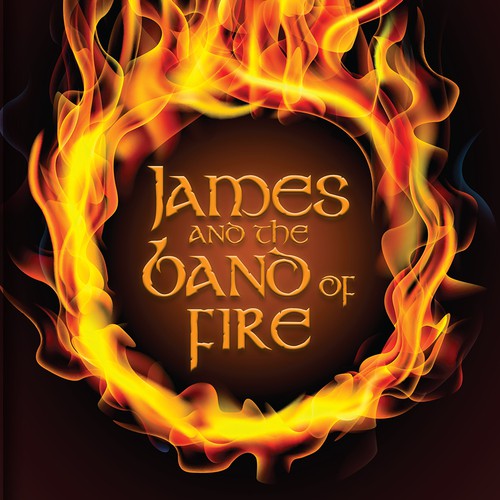 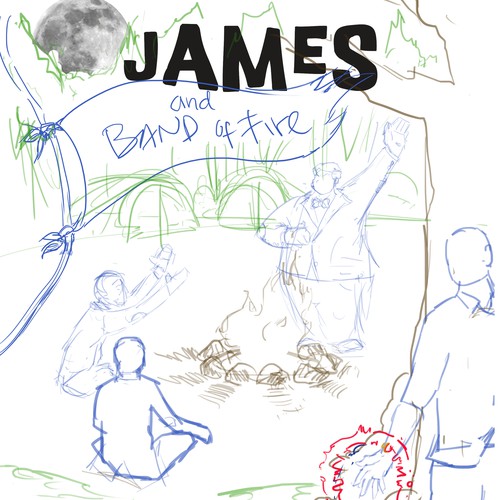 James and The Band of Fire

Dr Gibson is the father of 11 children, scoutmaster for many years and a specialist in foot and ankle care. He loves working with youth and children, enjoys the out doors and has always loved storytelling.

In our world exists a group of unique individuals, self-identified as Titans, that have been blessed with unique abilities. These abilities include Telepathy (Mind to mind communication), Orientopathy (Orienteering skills), Chronopathy (Time control to facilitate more rapid travel), Herculopathy (Superhuman strength), Zoonophonia (Ability to communicate with animals), Hippocratesense (Healing power), and Hoplonosmithy (Weapons specialist). These skills are utilized by The Band of Fire, a unique underground organization living among us, to protect the world from evil individuals and evil influences.

One of these individuals, James Adamson, began to notice unique abilities at age 8 and is invited with a small group of Titans to join The Band of Fire training program on his 12th birthday. The training occurs at a specialized summer camp called Campus Gaea, where Doc McAdams and other teachers help the young Titans develop their skills and grow into powerful members of the Band of Fire. The camp is an annual event for Titans from age 12 to 17 organized in a scouting style camp where survival and Titan skills are taught and developed.

As James and his friends learn to be Titans, a counterfeit band of evil Titans lead by his sister Camilla are trying to disrupt and even destroy The Band of Fire and Campus Gaea. They have even gone as far as kidnapping James’ father in hopes of gaining greater control over the training of the young Titans. As James learns of his sister’s indiscretion, he also learns he is not the typical Titan, he has a unique combination of abilities and skills that give him a great responsibility to have a much larger impact on the world and may even lead to the safety of his father. Under the careful tutelage of Master Doc McAdams, James, Bekah, Kari and Michael join with others of The Band of Fire to fight against The Order of The Kraken, and James himself comes to understand more fully his Titan abilities as a 12-year-old young man and the true power that comes from friendship.

Youth ages 11-19, both male and female. These are readers of books like Harry Potter, Hunger Games and Maze Runner.

NOTE: Feel free to use some creativity. Surprise me, as you may be thinking something I am not. To facilitate this, here are some details from the book.

The Band of Fire consists of 4 patrols with patrol flags:
Sphinx Patrol: The patrol flag was in the same colors (burnt orange and black) with a picture of a Sphinx, including the head of a human, haunches of a lion and great fire red wings of a phoenix. The picture showed the Sphinx with wings outstretched, mouth open breathing fire and the lion paws standing on a sword crossing a bow and arrow, all embossed on a large shield. (James is a member of this patrol with Bekah, his best friend)

Centaur Patrol: This patrol flag (red, white and black) was with a picture of a Centaur, including the torso, head and arms of a human and the body of a horse. The picture showed the Centaur galloping with fire rising from the hoofs, a head with a golden crown, a breast plate covering the chest and a bow and arrow in hand, all embossed on a large shield.

Griffin Patrol: The patrol flag (royal purple and gold) was likewise on the wall with a picture of a Griffin, including the body, tail and back legs of a lion, head and wings of a great eagle and eagle talons on the front feet. The picture showed the Griffin raised up on the hind legs standing on two crossed swords, wings spread wide with lightning bolts in each front talon, all embossed on a large shield.

Minotaur Patrol: arrayed in navy blue and silver under a patrol flag with a picture of a Minotaur, including the head, tail and feet of a bull, body, and hands of a human. The picture showed a powerful Minotaur holding a double-sided battle axe, large metal wrist bands and anklets, and standing on a mound of broken weapons and shields, also embossed on a large shield.

Characters:
- James: Has dark brown hair, light skin and ocean blue eyes, similar to the eyes of his mother. He is of average height and build for his age (at 12), but has long, thin fingers and slightly larger hands.
- Bekah: A very petite, even tiny 12 year-old girl with small hands, small feet, shoulder length brown hair, an olive complexion, dark brown eyes and small facial features. She looks a lot like a geisha doll, but without oriental eyes. (James best friend)
- Doc McAdams (Camp Master): An average height (5’11”) older gentleman, with what was once brown hair, now intermixed with multiple silver or white strands. He had distinct white streaks in his hair on either side of his head, and was cleanly shaven with short hair. Deep blue eyes and an infectious smile. Although he was older, he had broad shoulders and a muscular build, but had a slightly plump belly. He is usually dressed in a brown uniform with multiple patches over his left breast pocket and wears a leather, cowboy style brown hat with the crest of The Band of Fire on the front.

Campus Gaea: A campground consisting of log cabins and tents located in the back country of the Wasatch Mountains in Utah.

Classy cover for a memoir. A woman discovers a family secret; her real father was a priest.
499 US$
Classified as memoir, I see my audience as women, middle aged plus. Women interested in family relationships and the inh
158
entries
38
designers
Book Cover for Historical Adventure/Romance Novel
US$199
People who like Phantom of the Opera, historical fiction and historical romance.
63
entries
7
diseñadores
I need an eye-catching book cover that grabs your attention right away.
$499
murder mystery readers, true crime readers, police procedure readers, suspense readers, thriller readers, police enthusi
190
entries
18
デザイナー数
Design a dark and foreboding Crime Thriller Cover
GBP 239
Those interested in mystery thrillers and crime novels. Mostly adult audience
77
entries
25
diseñadores
eBook cover for a crime story
179 €
Any person who likes crime stories like The Godfather, The Departed, Breaking Bad, etc.
94
entries
20
designers
Book cover for the true story of a Get Money and Do Good family
499 US$
35-65 adults- male/female- interested in capitalism/business, family- traditional and non, and leaving a legacy. Likely
98
entries
19
designers

Comienza ahora
Creative Book Cover for a Female Dating and Relationships Title
199 USD
Women reading this book are usually younger and they’ve just been through a breakup. They don’t know how to collect the
150
entries
24
designer
Minnesota Cabin scene to appeal to women who like love stories
399 $
Female, USA, 18-50
142
entries
27
Designer
The Sword & Mr. Stone -- a modern day search for Excalibur
US$ 199
People interested in humor and fantasy.
43
entries
12
designers
Awakening - A Paranormal Romance Cover Contest
US$ 399
Women anywhere in the world, 18-60 years old
89
entries
22
diseñadores
Design a cover for "Messages that Mean the Most"- Inspiration for Finding Potential
$ 199
Young persons in their twenties who have graduated and seeking direction and professionals in their thirties who seek in
37
entries
15
Designer
Captivating cover for the book "The Way Home"
299 US$
People in general interested in life stories. People that struggle with addiction.
121
entries
49
diseñadores
Más información sobre diseño de portada de libro o revista
Vea como funciona