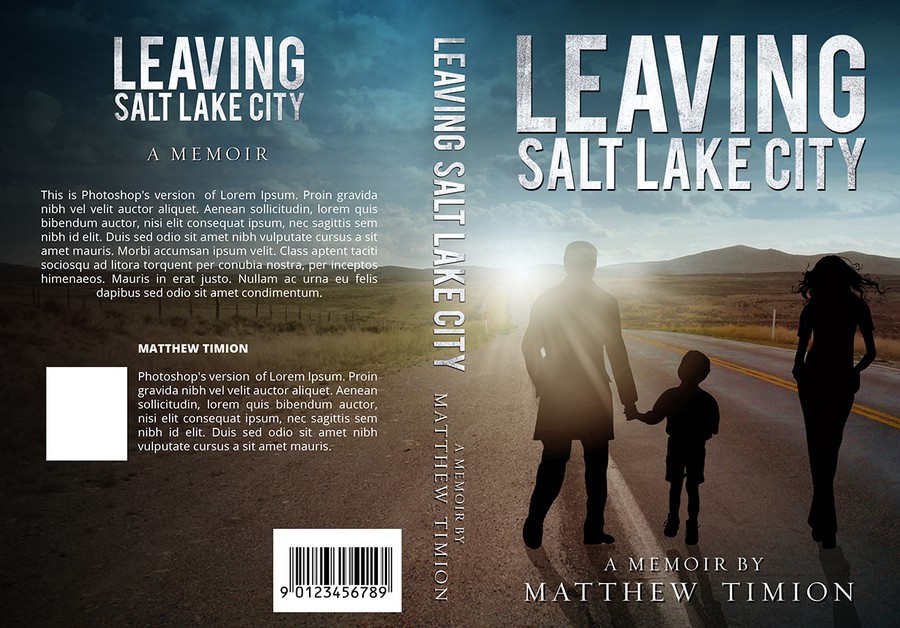 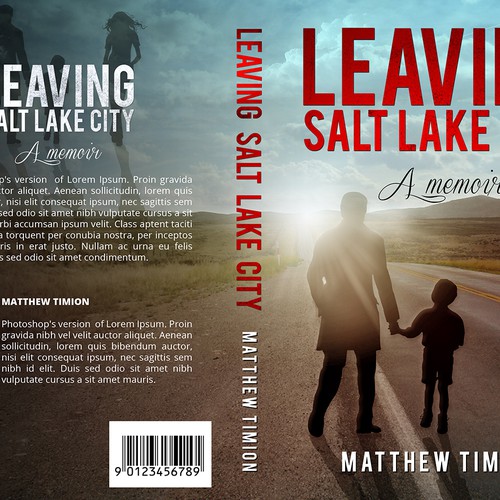 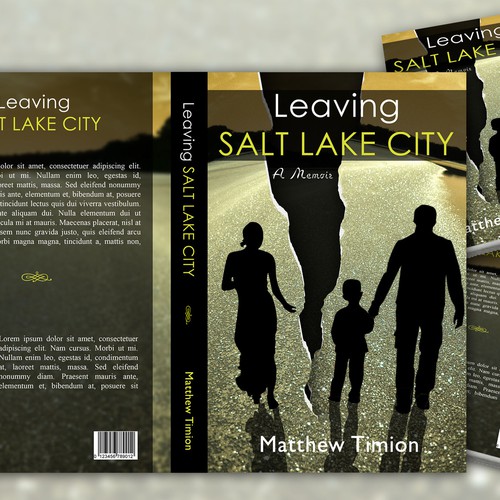 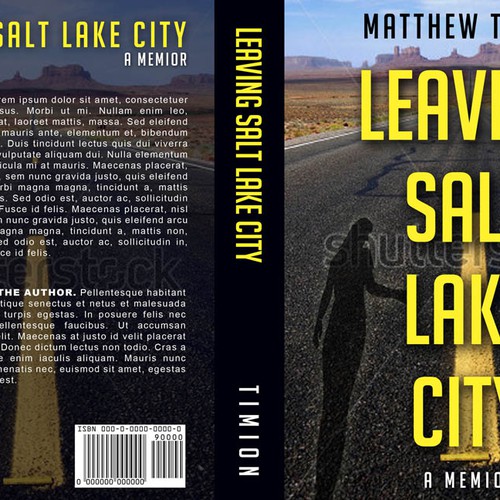 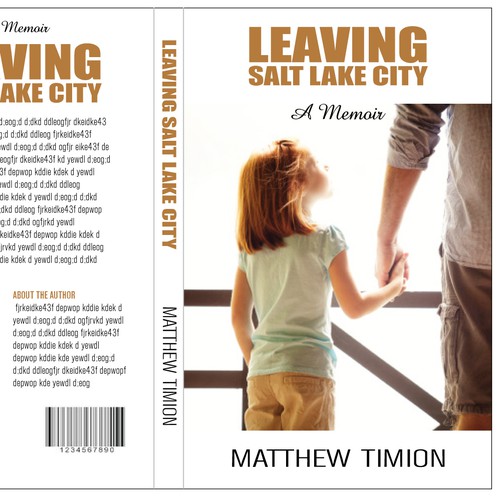 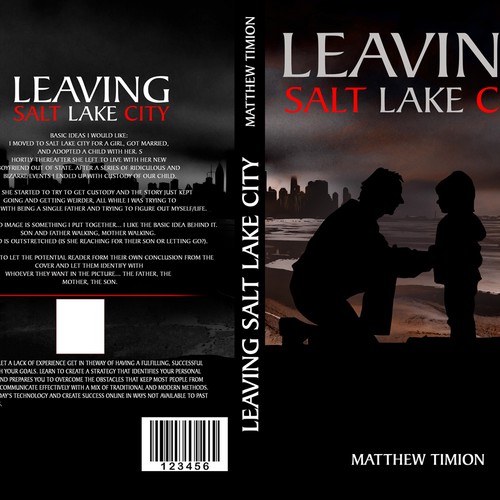 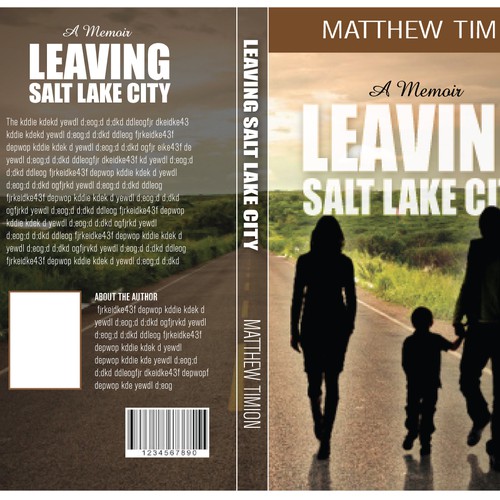 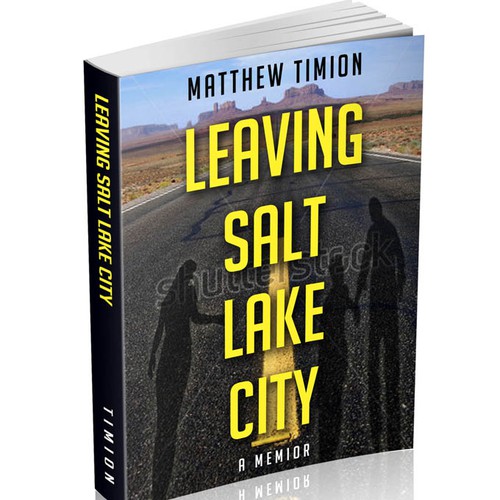 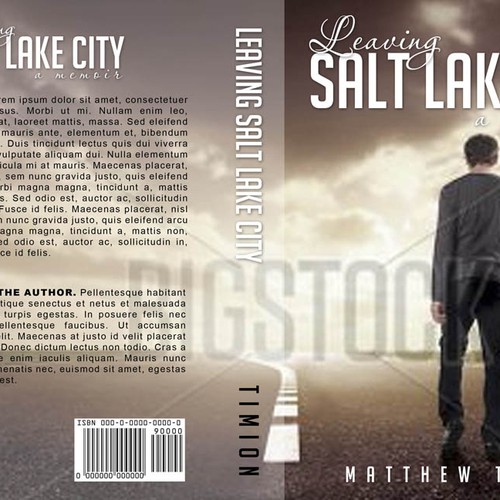 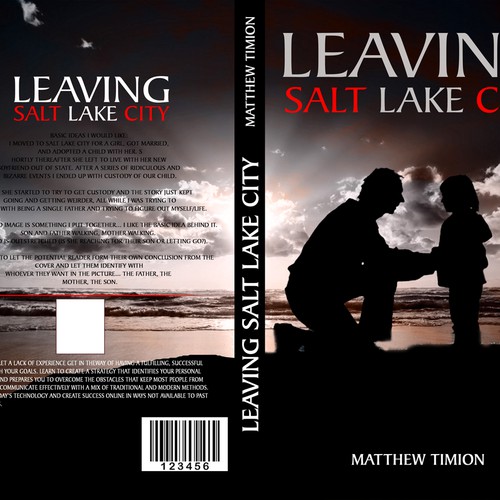 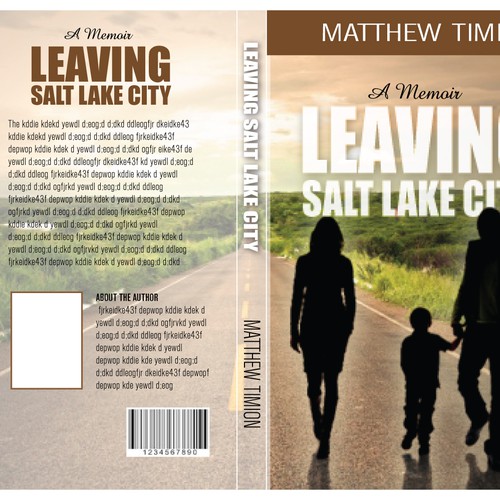 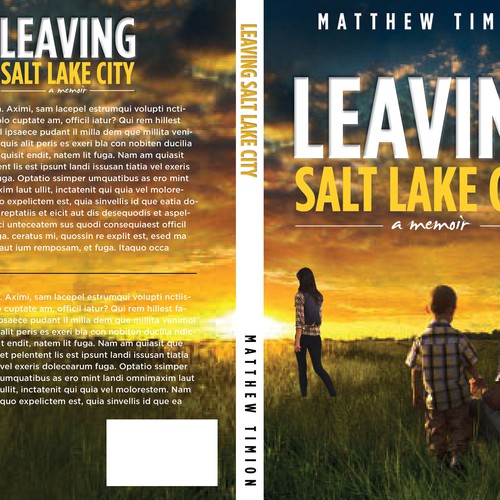 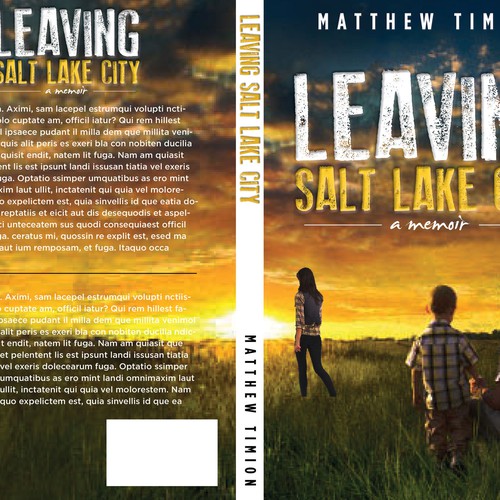 Target audience is really anyone who has lived with someone mentally ill, been an outsider, or just tried to "find themselves" way too late in life.  Consider it a coming of age story mixed with a pathological liar.

I don't want to give away the story too much in the cover, but I also want it to be compelling and make someone pick it up.

Basic ideas I would like: I moved to Salt Lake City for a girl, got married, and adopted a child with her. Shortly thereafter she left to live with her new boyfriend out of state. After a series of ridiculous and bizarre events I ended up with custody of our child.

Then she started to try to get custody and the story just kept going and getting weirder, all while I was trying to grapple with being a single father and trying to figure out myself/life.

The attached image is something I put together... I like the basic idea behind it. Son and father walking, mother walking. Her hand is outstretched (is she reaching FOR their son or letting go?).

The idea is to let the potential reader form their own conclusion from the cover and let them identify with whoever they want in the picture... the father, the mother, the son.

The title is "Leaving Salt Lake City," but I don't need it to be Mormon centric at all.

And less is more... I'm not a designer, so I will never be able to make this look the way it should.

If you want to know more about the story please ask (if that's possible here). I want it to be compelling and something people will want to pick up/click based on the cover alone. The story is good/compelling/unbelievable. Let's get the cover to look the same.

The more ideas the better. I don't need it to be overwhelming or just "too much."

Size will probably be 5.5 x 8.5 (inches).  Please use a standard template to allow for bleed while printing.Also leave room for the ISBN barcode on the back.

Airbnb Ebook cover design
US$199
Target audience would be people looking to make some extra money on the side, people that are interested in real estate
41
entries
12
designers
Creare copertina ebook di formazione per giovane autore
179 €
IT: Ragazzi giovani che desiderano con tutto il loro cuore trovare sé stessi. Amanti della vita. Persone che credono in
51
entries
19
designers
Create a non-fiction book cover with the potential for follow-up paid projects
US$299
Clear, Concise and Compelling was written to help these individuals: • People who fear public speaking • Those who l
275
entries
48
designers
Design my rockabilly tattoo-art style book cover
539 AU$
-Artists, creatives, free-thinkers, lgtbqi's, empaths who want to get their fitness and wellbeing needs covered. -Peop
35
entries
8
Designer
A Life-Changing Book for Young Adults Needs an Auspicious Designer!
$299
High School Upperclassmen, entry-level college students, and the adults who mentor them. "Auspicious" is an adjective,
234
entries
43
designers
Design book cover for nonfiction Children's book (for a nonprofit)/Social-Emotional Learning
799 US$
This book is for children 2-7 with the guidance of parents, teachers, counselors who focus on social-emotional readiness
138
entries
15
diseñadores