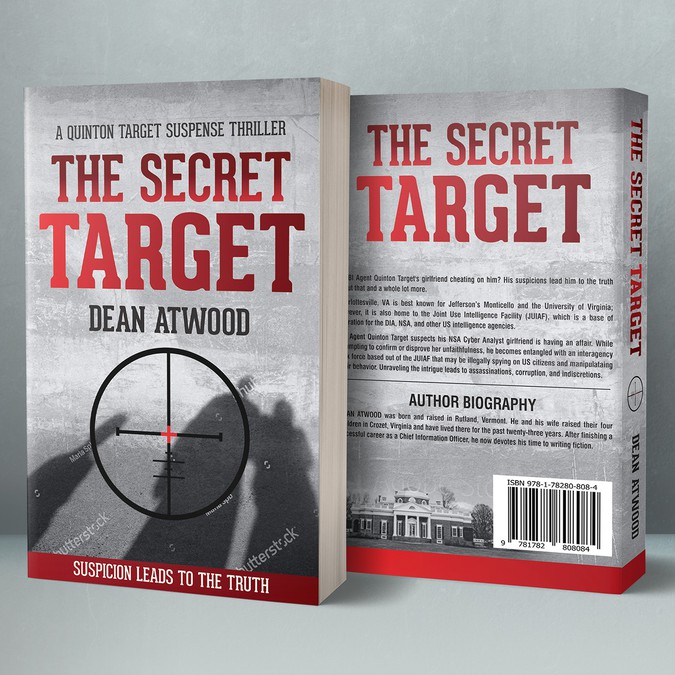 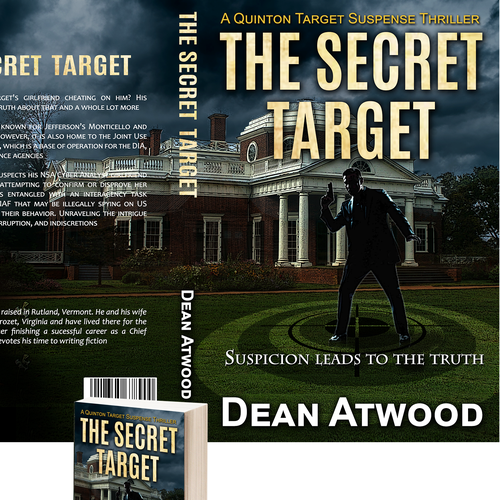 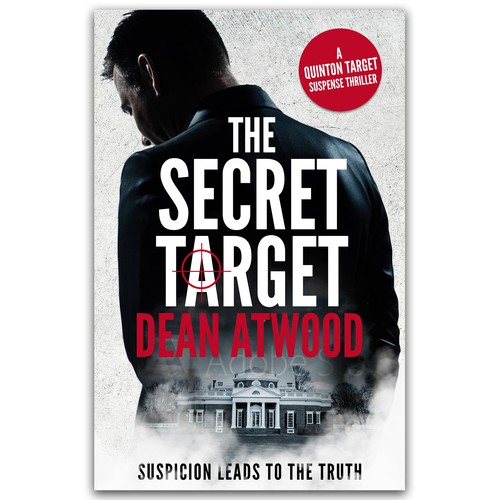 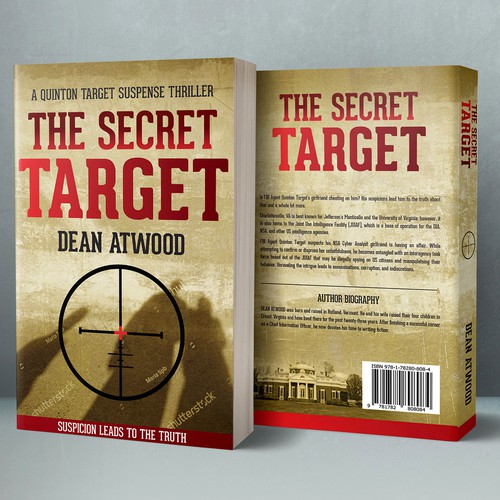 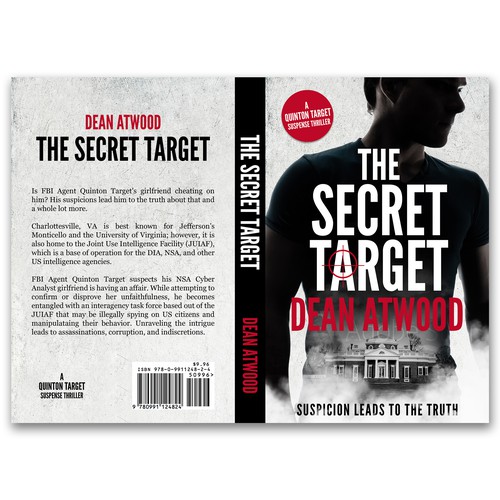 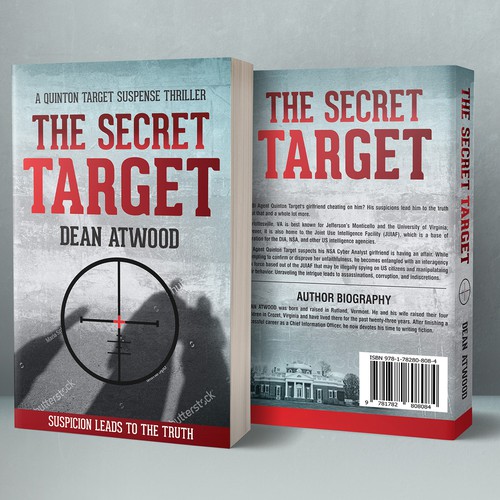 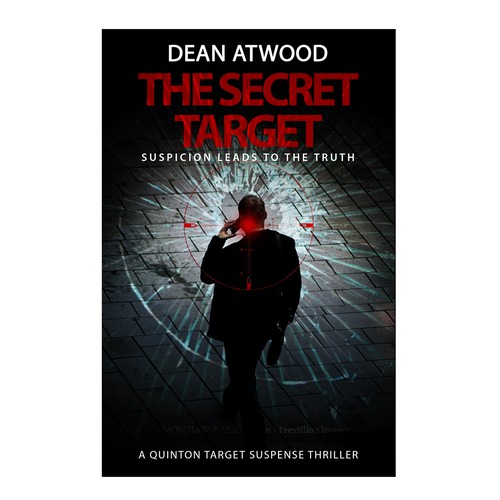 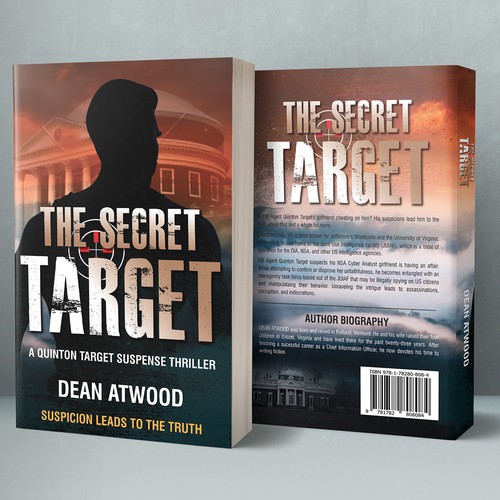 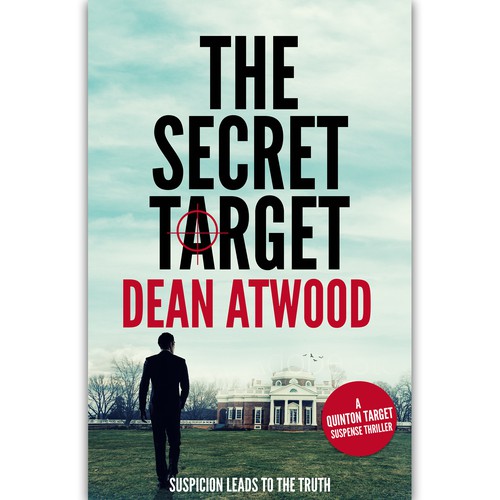 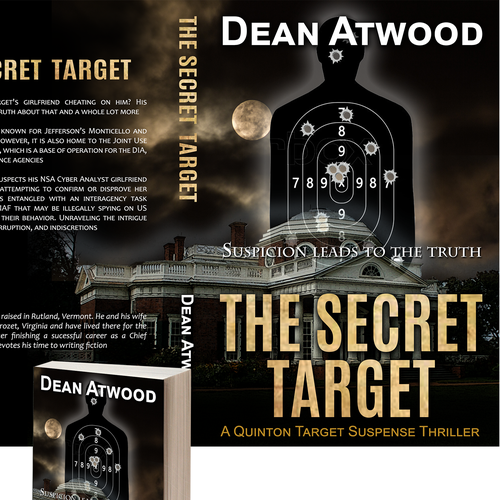 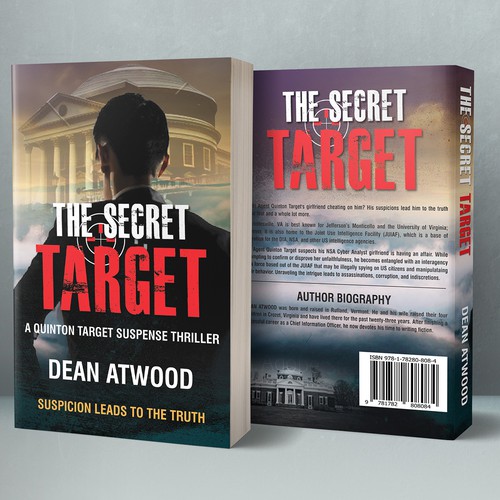 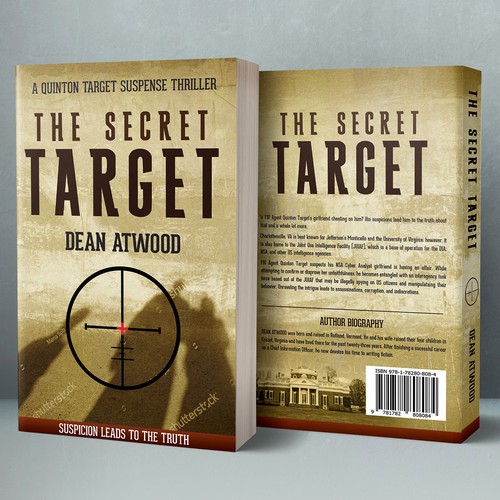 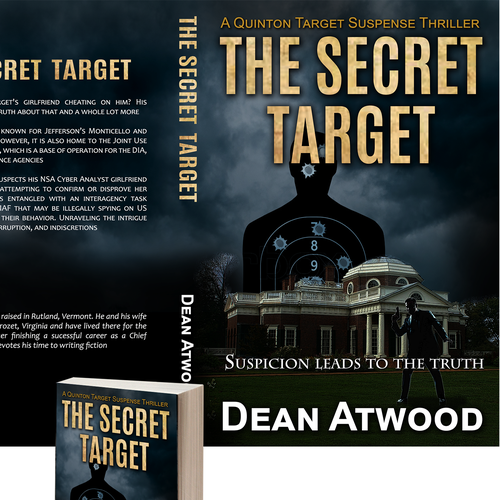 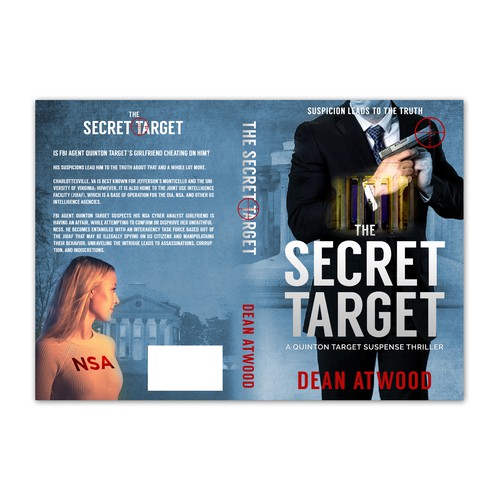 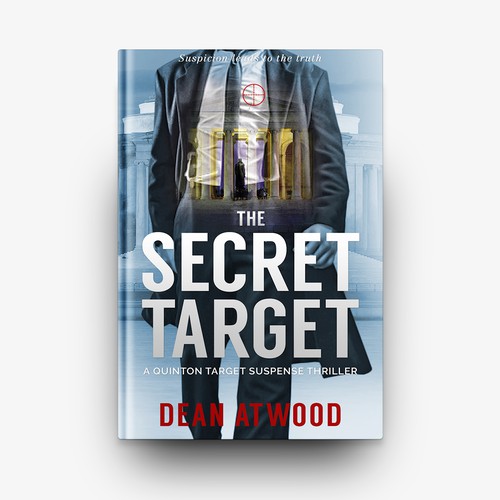 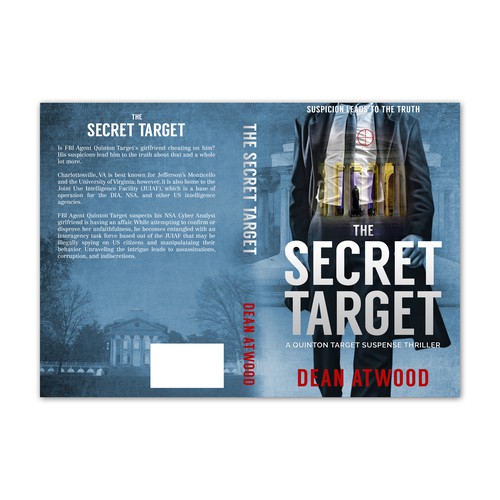 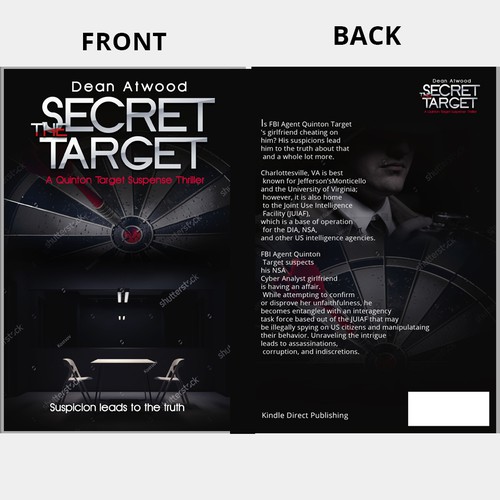 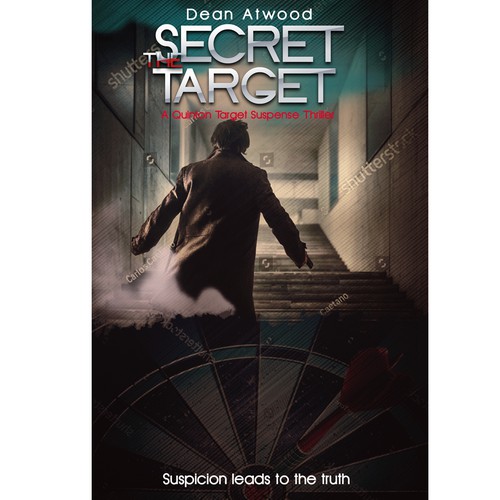 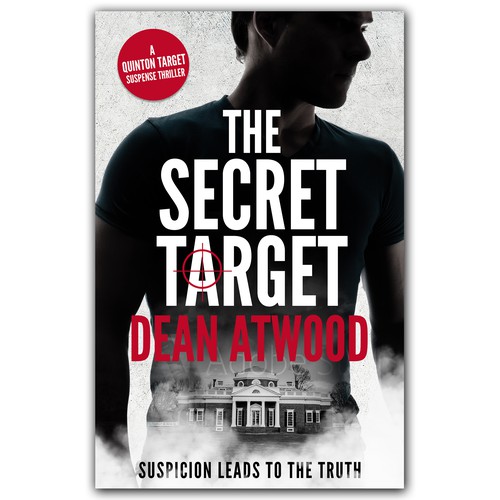 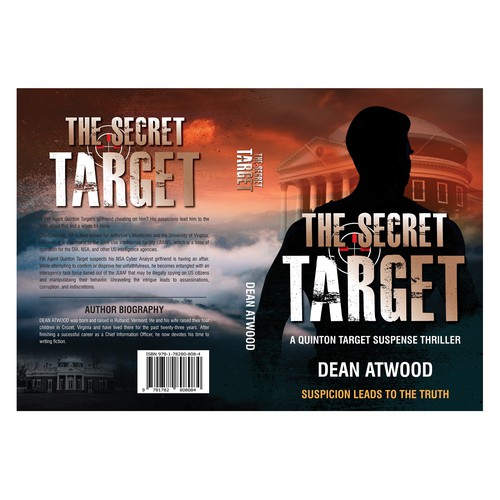 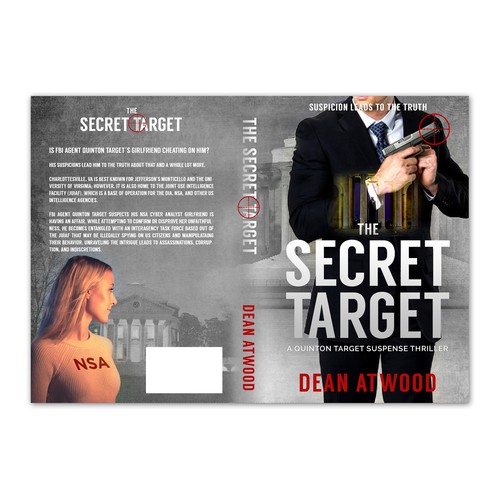 DEAN ATWOOD was born and raised in Rutland, Vermont. He and his wife raised their four children in Crozet, Virginia and have lived there for the past twenty-three years. After finishing a sucessful career as a Chief Information Officer, he now devotes his time to writing fiction.

This novel is the first in a series of suspense thriller novels with the main character FBI Agent Quinton Target, who is located in Charlottesville, VA. It's about the abuse of power by intelligence agents and corporate executives.

Adult men and women who enjoy suspense thrillers with a little romance thrown in to keep things interesting.

1. This is the first novel in a series with FBI Agent Quinton Target as the lead character. It would be good to have some element of the design be present on this cover and covers of future novels in the series. An example would be to include a small target somewhere in the design, since the main character's last name is Target and the book title is The Secret Target. This would be similar to the Alex Cross novels by John Patterson (a small sillouette of a man in overcoat appears on several book covers of novels in the series)
2. The book is set in Charlottesville, VA. Local landmarks include Jefferson's Monticello and UVA Rotunda. Part of the book takes place at the Joint Use Intelligence Agency Facility in Charlottesville. Don't have to include any of these in design, just something to consider.
3. This is a suspense thriller with assassinations, coruption, and personal indiscretions, so the tone of the book cover should reflect the suspense and betayal.
4. There doesn't have to be images of any characters in the novel on the bookcover, but FYI, the 3 main characters are:
Quinton Target - FBI Agent Quinton Target, in his thirties, handsome, good at solving crimes. Not so good at understanding women.
Blaire Saunders - NSA Cyber Analyst, late twenties, blonde, is sexy and knows it. in opening she's wearing tight jeans and Tshirt with NSA across front.
Lieutenant Mad: Former Military Intellignence Officer, in her thirties, appears to be suffering from PTSD, conspiracy theorist, beautiful with auborn hair, wears army green shorts, camouflage shorts, UVA cap
5. The book takes place in early summer, so if your design reflects a season, it should be summer.

Technically, I will need all of the files necessary to publish the book on Kindle Direct Publishing. This includes all files in Photoshop format (PSD). The book is 393 pages for a book size of 5.25 in. by 8 inches

Since the covers on my first two novels included shades of orange, I'd like to avoid that color, so this new series of novels is distinctive. Other than that, feel free to be creative. Information provided in this brief is to stimulate creativity. Nothing set in stone. Just capture the mood of a suspense thriller.

Comienza ahora
Design a book cover that includes a backround that looks like blue blueprint paper.
$399
- Any high school students who are looking to attend college. - College freshmen and sophomores. - Students looking
9
entries
3
diseñadores
Classy cover for a memoir. A woman discovers a family secret; her real father was a priest.
499 US$
Classified as memoir, I see my audience as women, middle aged plus. Women interested in family relationships and the inh
158
entries
38
designers
Book Cover for Historical Adventure/Romance Novel
199 $US
People who like Phantom of the Opera, historical fiction and historical romance.
63
entries
7
designer graphistes
We need a powerful book cover for a Science-Fiction novel
359 €
The target audience is between 25-45 years old, speaks French (France, Canada, Belgium, Switzerland), who likes Sc-Fi
67
entries
12
designer graphistes
Book cover for non-fiction
199 $
156
entries
13
Designer
paper back and ebook cover
£ 319
Someone is reading this book to learn the most effective way to write a to-do list that will keep them motivated and pro
51
entries
20
designers
Más información sobre diseño de portada de libro o revista
Vea como funciona