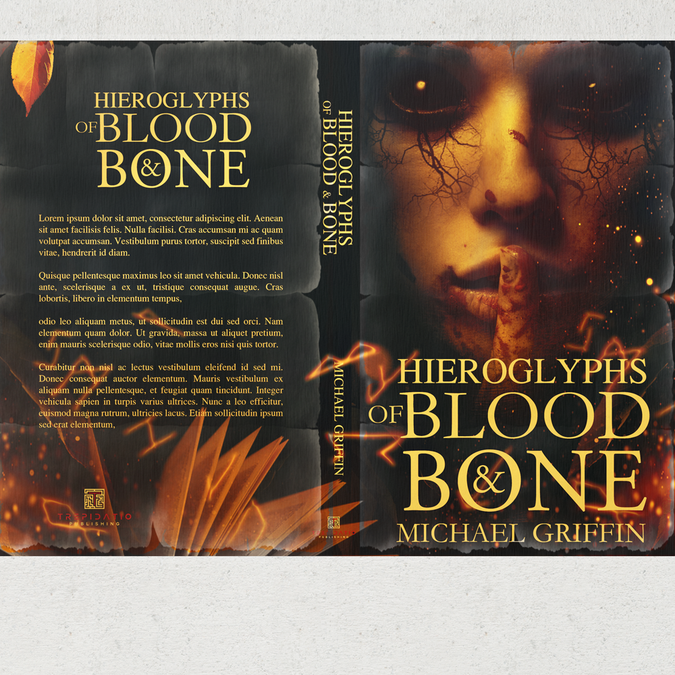 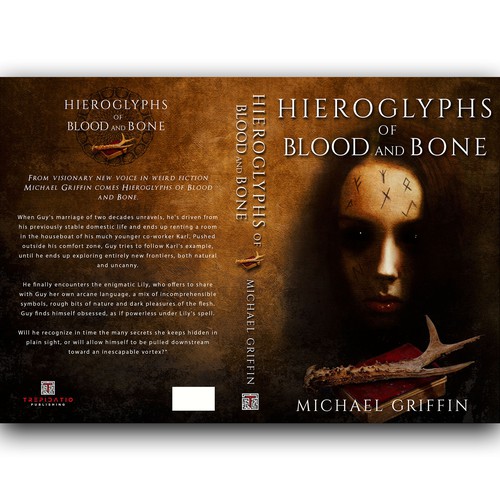 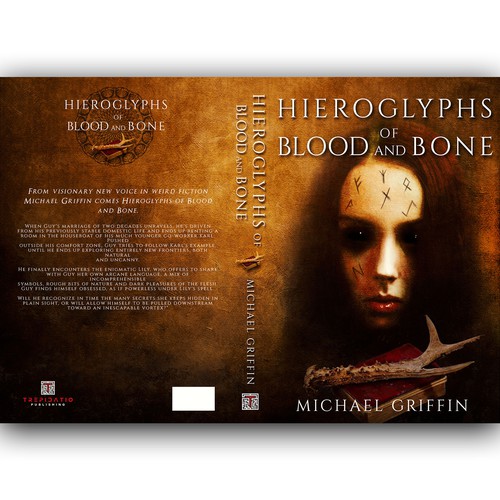 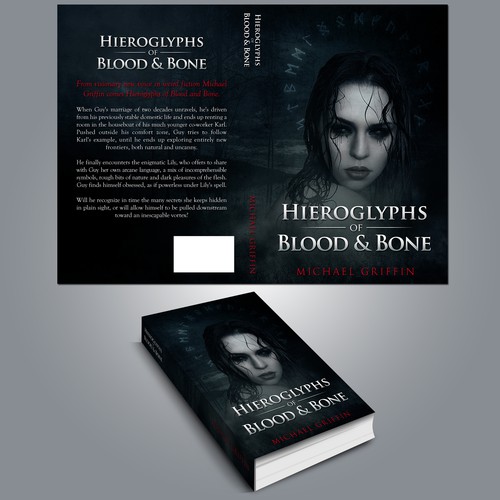 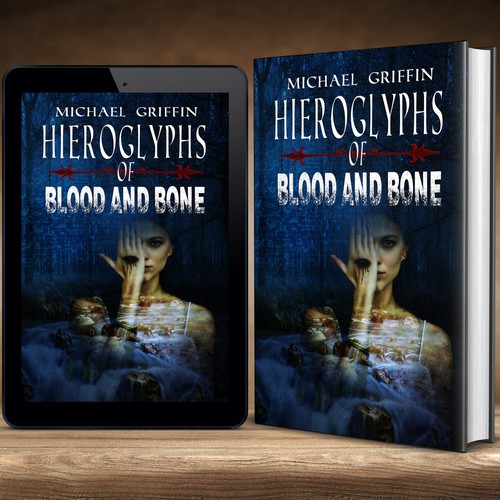 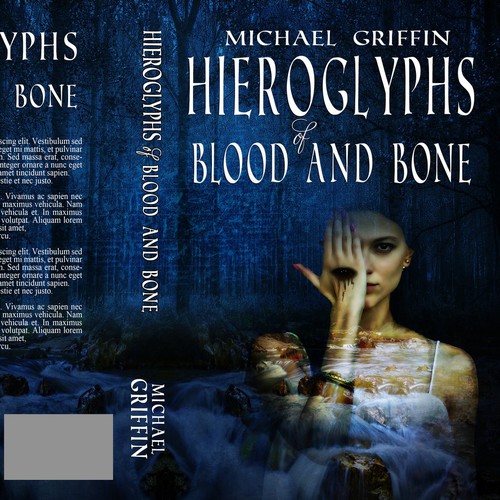 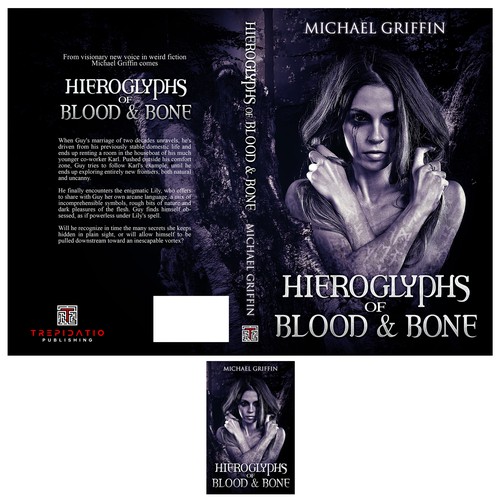 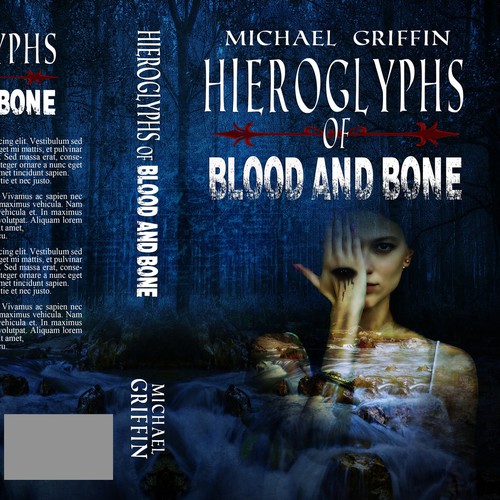 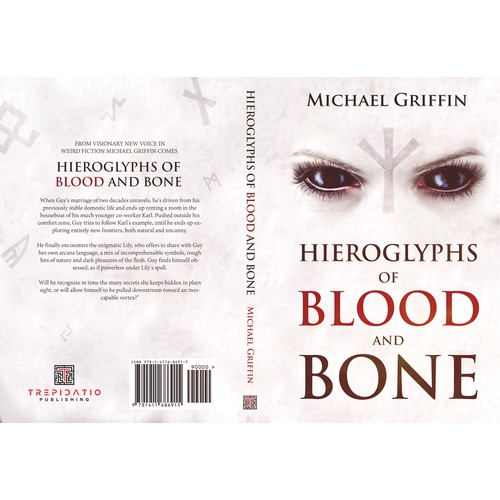 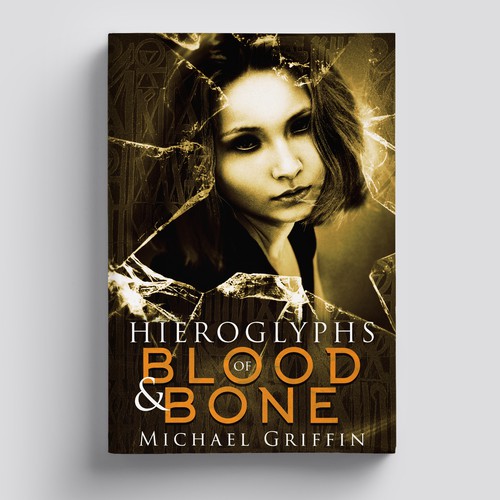 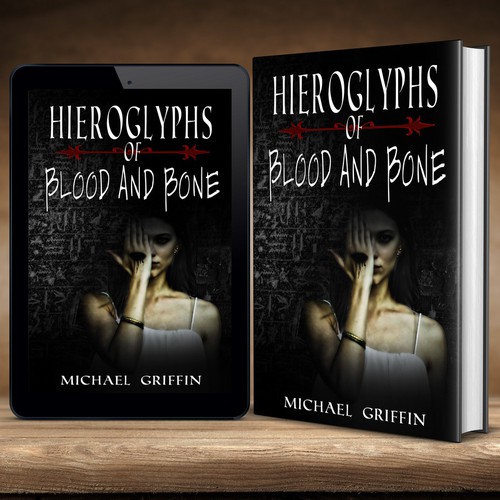 Hieroglyphs of Blood and Bone

When Guy's marriage of two decades unravels, he's driven from his previously stable domestic life and ends up renting a room in the houseboat of his much younger co-worker Karl. Pushed outside his comfort zone, Guy tries to follow Karl's example, until he ends up exploring entirely new frontiers, both natural and uncanny.

He finally encounters the enigmatic Lily, who offers to share with Guy her own arcane language, a mix of incomprehensible symbols, rough bits of nature and dark pleasures of the flesh. Guy finds himself obsessed, as if powerless under Lily's spell.

Horror enthusiasts with a bend towards more literary writing.

Template for cover will be sent later

Logo for spine and back cover are attached.

We are thinking that we want the focus to be the world that the book is about.

Focus should be the hieroglyphics and the woman.

Important visual elements:
-Alluring
-Half-seen woman in the dark
-Natural scene near the river in the woods
-Incomprehensible book of nature drawings and figures
-Symbols and runes
-Think mythical scenes

A silhouette of Lily, possibly reversed, revealing a river running through a wooded scene... in her hands she holds an open book, its pages filled with ancient runes and occult symbols.

I would be happiest if the female form on the cover doesn't come across as too cheesy...

I imagined something more realistic.

Text treatment is not too gimmicky, like with bleeding fonts or or glowing words, that kind of thing.

The JPGs attached include visual reference for Lily (especially when she is transformed in the middle of the night), the symbols in her books, and some of the natural surroundings.

Here are a couple of short bits of text where Lily first reveals her book to Guy, and then when Lily is transformed in the night, and her skin is covered with patterns.

Also, her eyes are shadows as if smudged with coal, as in one of the attached images.

Generic or cheesy ideas around horror
Nothing to illustrated

Comienza ahora
To "Where the Moon Has Been" and back with your cover design for my fantasy novel
529 $CA
Adult and young adult fantasy readers of both genders, European and North American locations for the most part. Also li
146
entries
39
designer graphistes
Book Cover For New Author
299 $
Fiction readers who want a "feel-good" reading experience unpunctuated by excessive vulgarity or foul language. Female r
52
entries
20
Designer
Design a UNIQUE and ORIGINAL book cover for my debut YA FANTASY novel
$749
This book is written for young adult readers age 13-18 who enjoy fantasy and action.
129
entries
43
diseñadores
Amazon Ebook Cover for german ebook (Topic: Motivation for studying)
299 €
Students
96
entries
16
designer
Powerful and visual health supplement Amazon KDP book cover
US$399
Both genders starting in early 20's. People who already have compromised immune systems, worried about corona virus, or
194
entries
51
diseñadores
Captivating book cover to inspire hope in the world, and the power of positivity!!
1 599 $CA
Adults in the self- help category, those facing cancer, those who are care givers, anyone who wants to up-level their li
462
entries
82
designer graphistes
Más información sobre diseño de portada de libro o revista
Vea como funciona