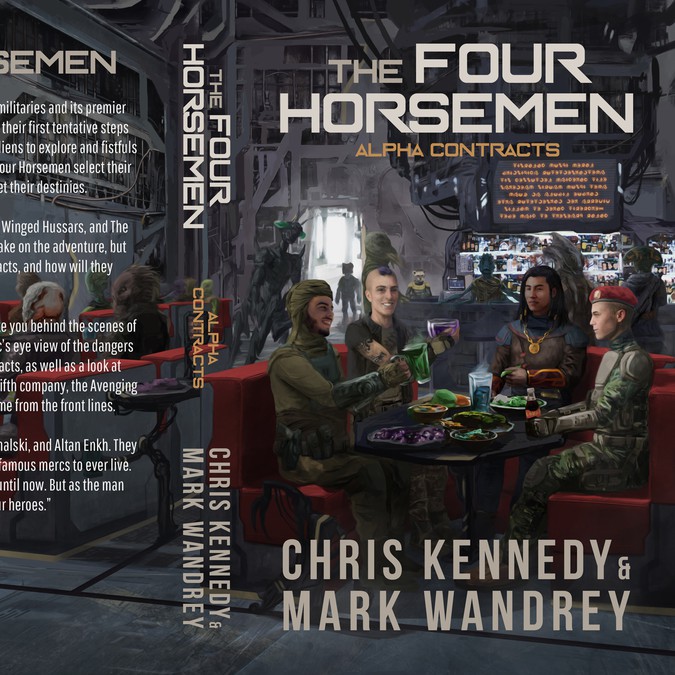 Design a Book Cover for a Bestselling Series Book! 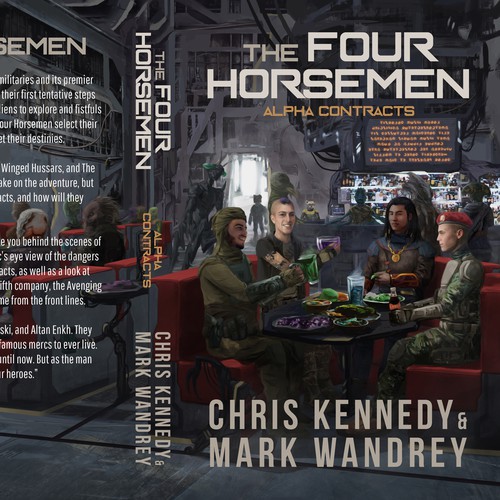 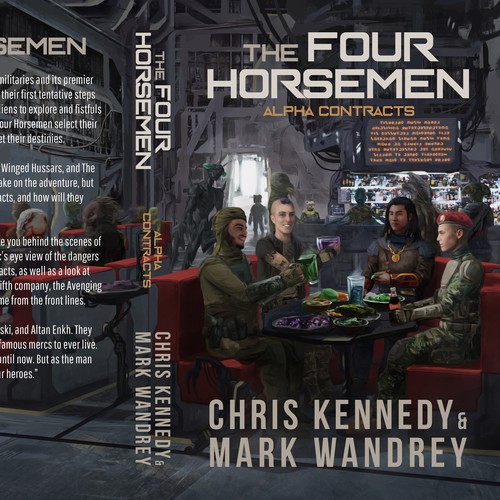 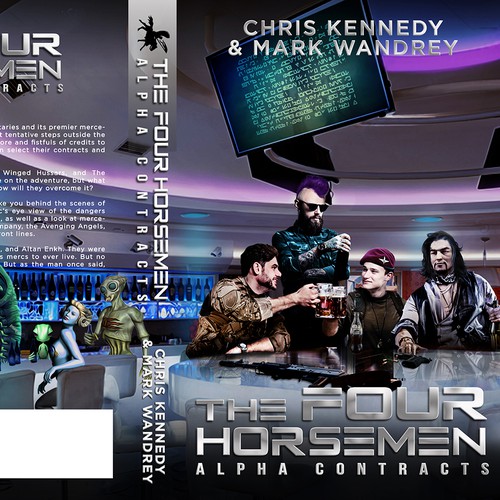 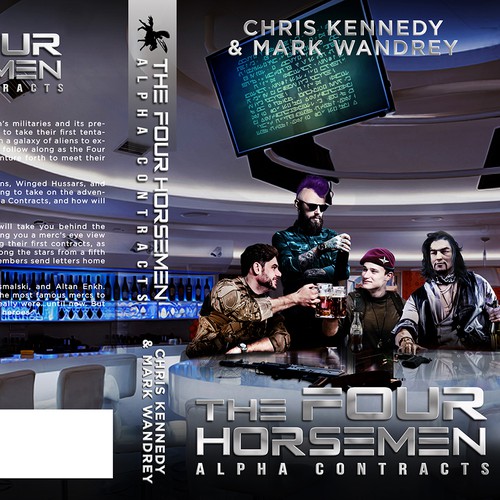 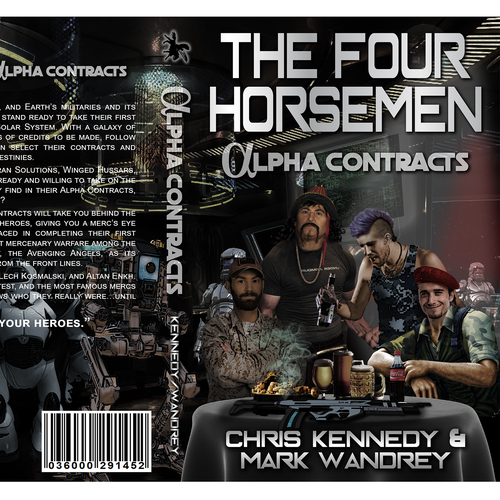 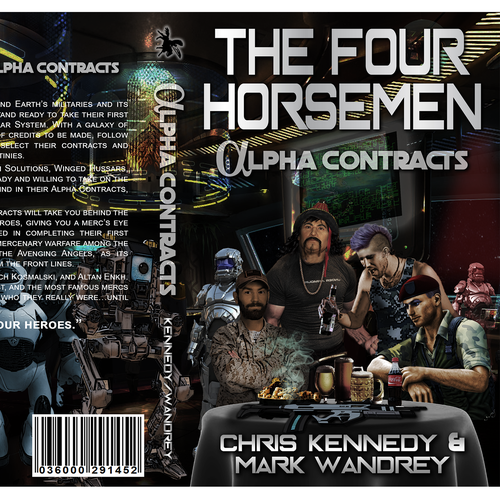 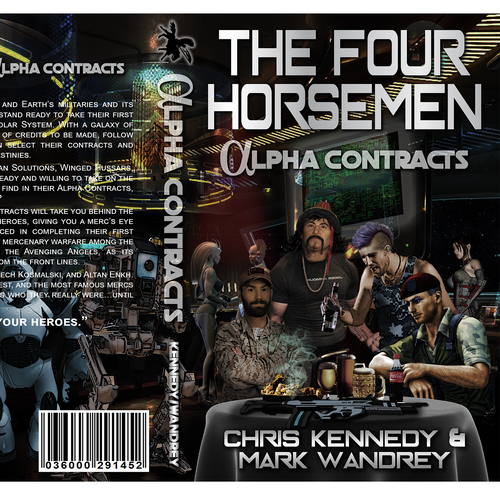 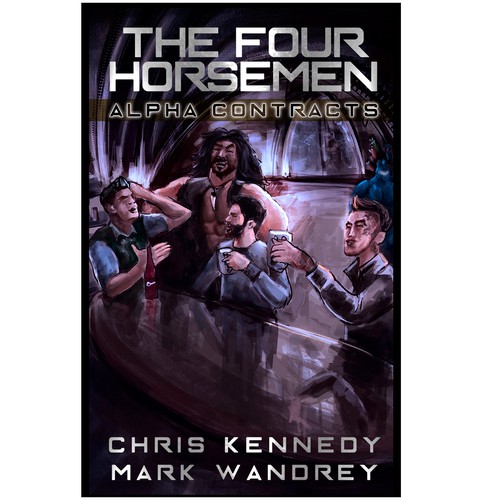 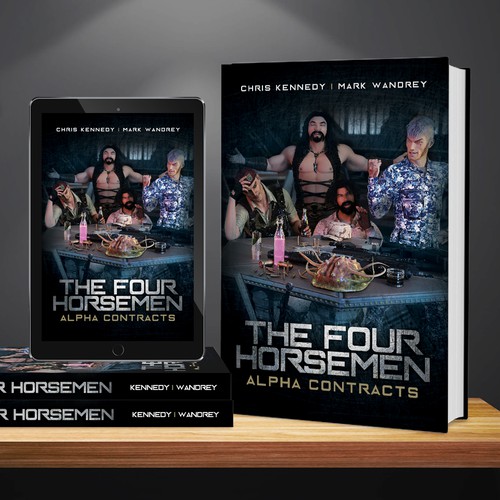 This book is about the first contracts that four mercenary companies take out in the galaxy, once first contact with aliens is made.

I need a book cover for an upcoming book I'm publishing in the bestselling Four Horsemen Universe series. The book is "The Four Horsemen: Alpha Contracts". There are two authors: Chris Kennedy and Mark Wandrey. I will need three versions of the cover:

2. 5.5” x 8.5” Print Book (for CreateSpace):
a. Media: PDF.
b. Minimum resolution of 300 DPI.
c. Safe Zone. Text and images must be at least .125" inside the trim lines to ensure that no live elements are cut during the bookmaking process. Will provide page count at later date to finalize the cover.
d. Needs to have space for the ISBN block for C/S.
e. Page count and back cover copy will be provided when available.

Font: Enter the Grid (it is a free font)

I am looking for something like on the attached early version of the cover, but done a little more naturally. The scene is in an alien mercenary bar, where four leaders are celebrating the successful completion of their first mercenary contracts. There needs to be four people on the cover:

1. An American, in a green camouflage uniform, with a maroon beret and what looks like a Coke bottle in front of him. He would be tall and broad-shouldered, kind of cowboy-looking.
2. A Mongol with long black hair. He should have a gold chain visible; other jewelry is good. (He is a drug lord in his other job.)
3. A tall and thin, European punk-rocker in navy camouflage. The man has a purple mohawk and many tattoos.
4. An Iranian dressed in desert camouflage. He would be darker skinned and would have a beard.

The other covers in the series with aliens are attached so you can see some of the aliens that would be recognizable and get a feel for the series.

Thank you very much for taking a look at this project!