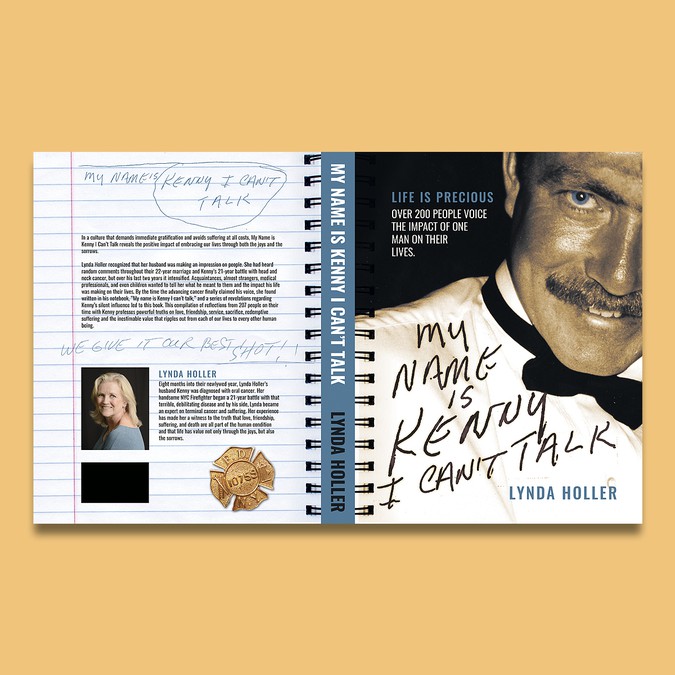 Design a book cover for "My Name is Kenny, I Can't Talk." 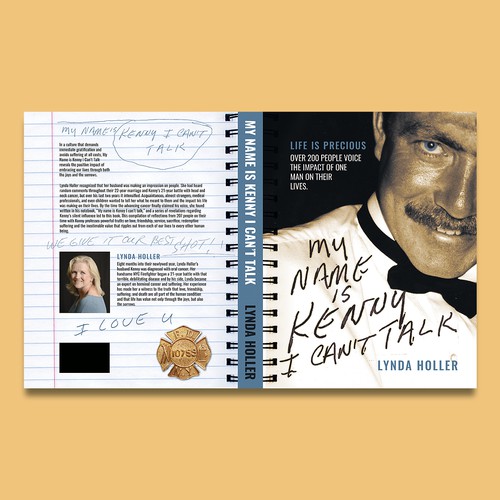 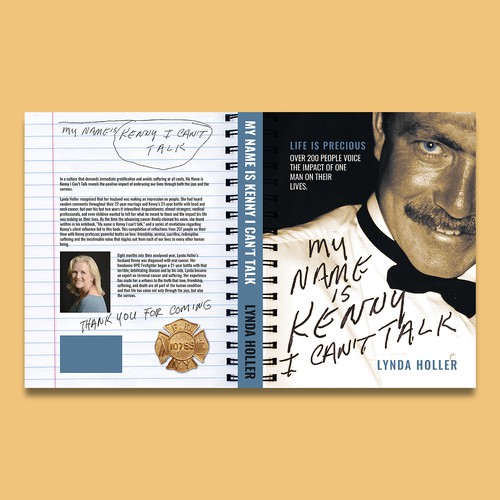 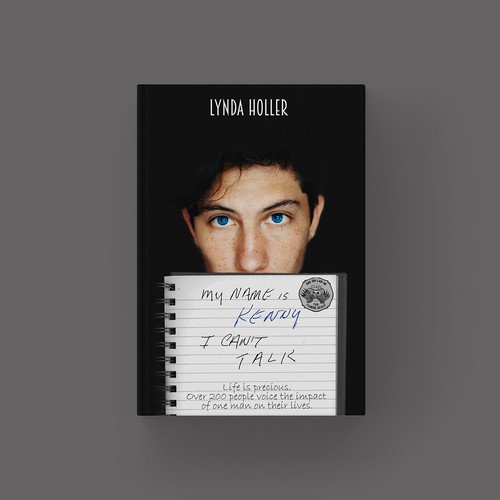 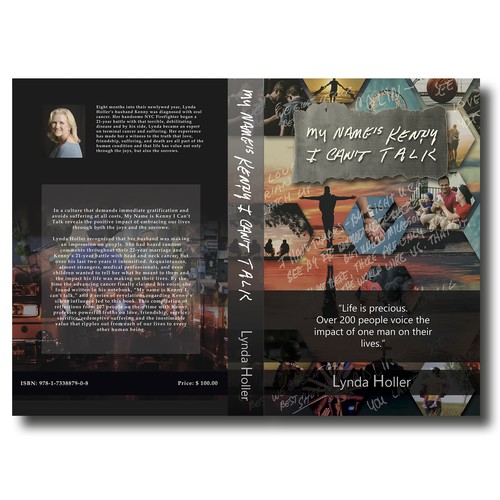 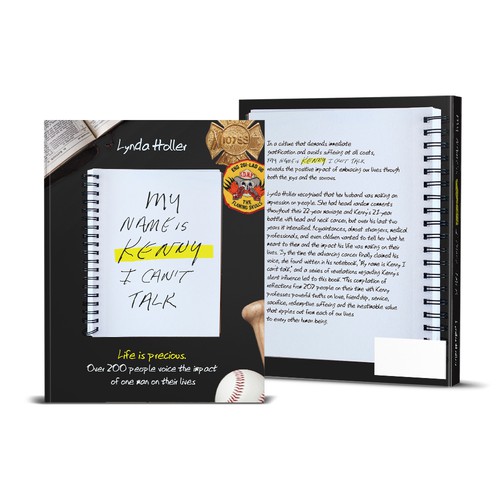 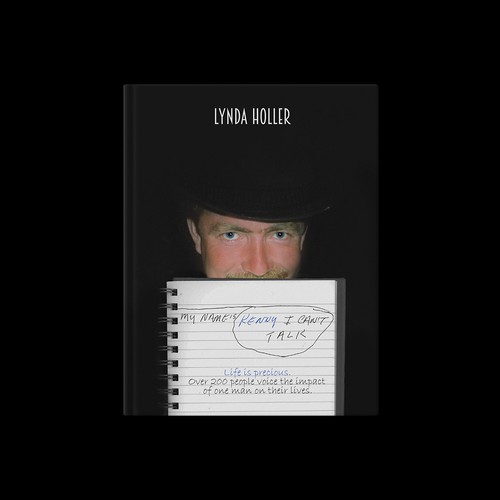 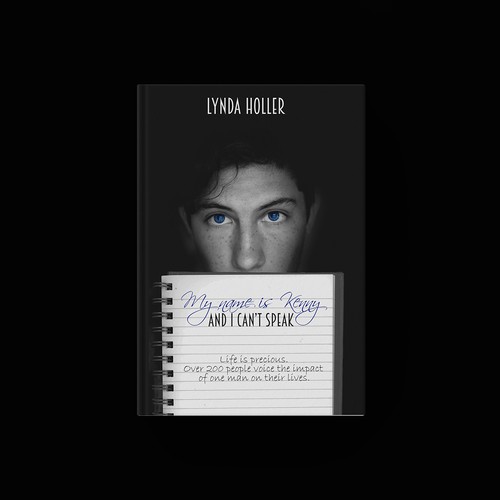 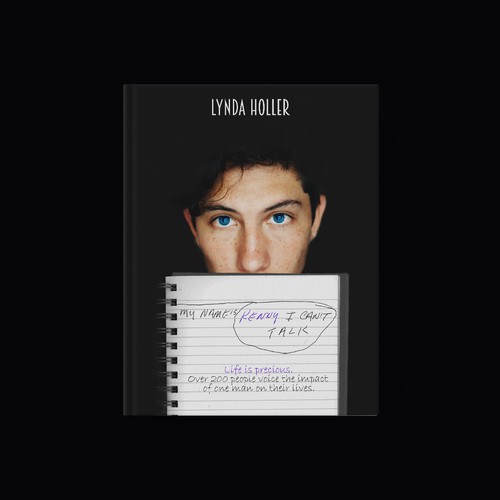 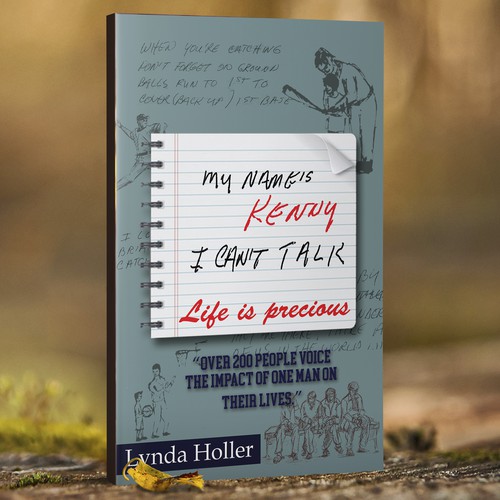 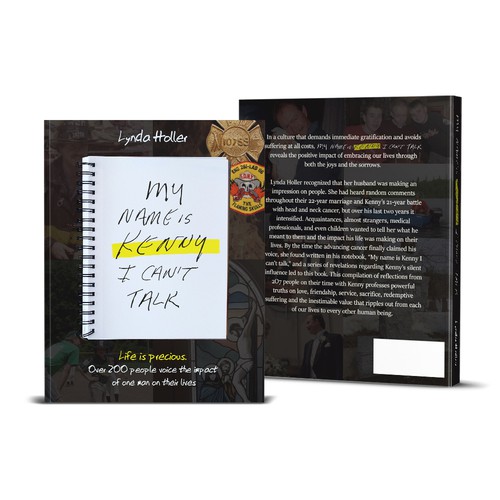 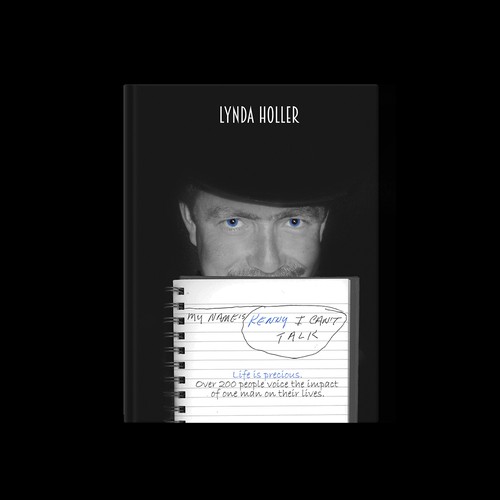 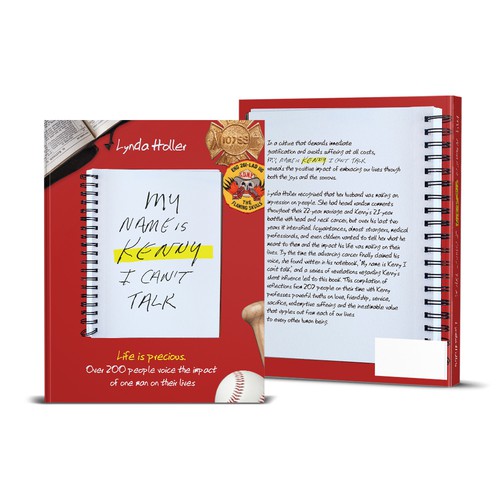 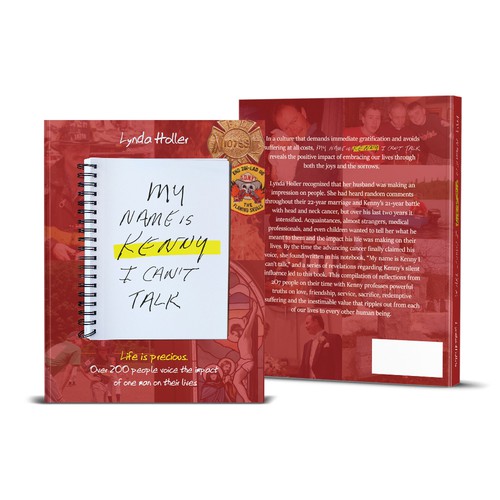 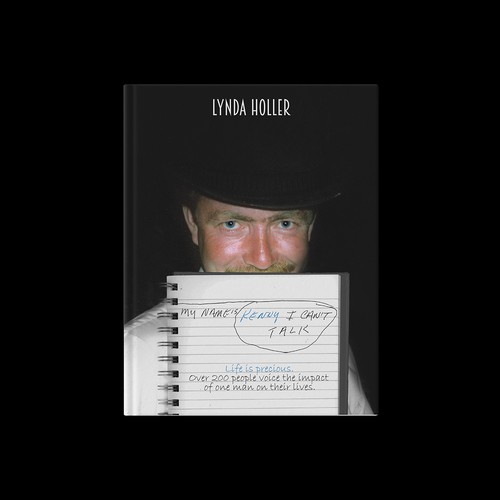 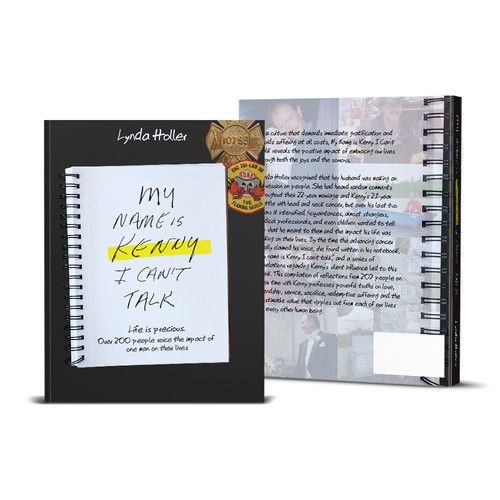 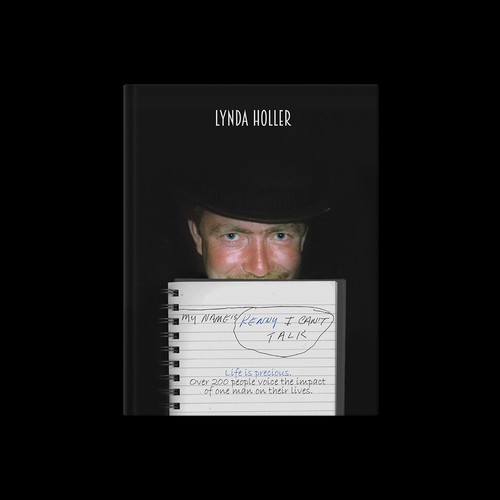 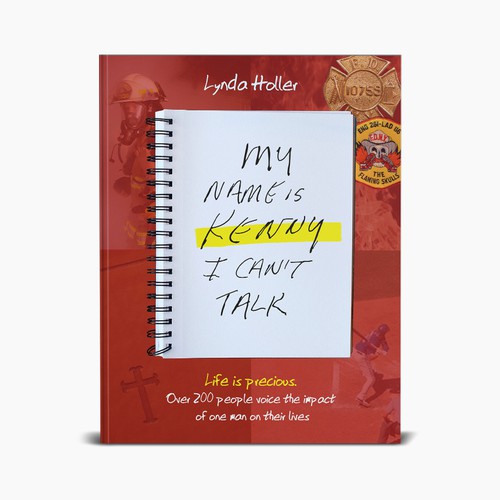 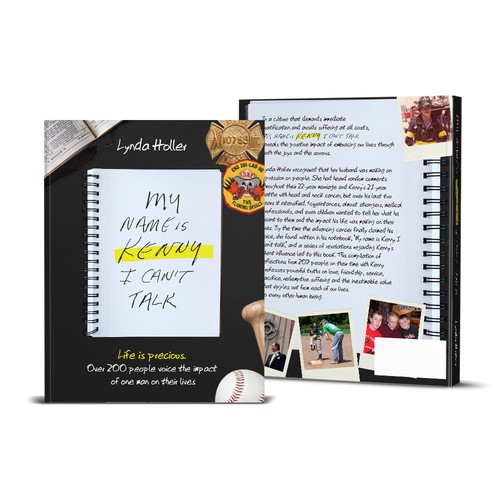 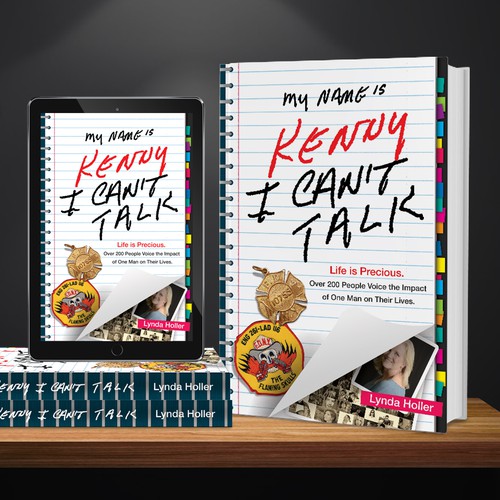 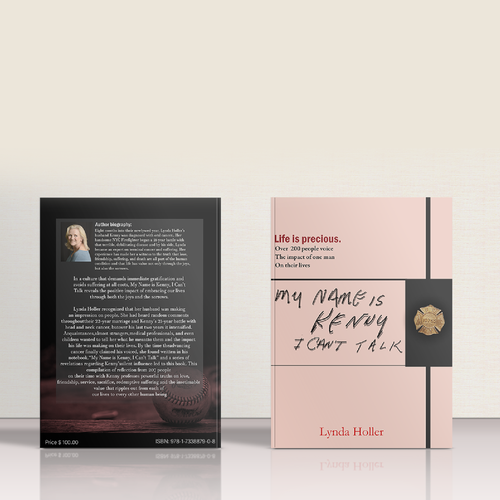 My Name is Kenny, I Can't Talk

Eight months into their newlywed year, Lynda Holler’s husband Kenny was diagnosed with oral cancer. Her handsome NYC Firefighter began a 21-year battle with that terrible, debilitating disease and by his side, Lynda became an expert on terminal cancer and suffering. Her experience has made her a witness to the truth that love, friendship, suffering, and death are all part of the human condition and that life has value not only through the joys, but also the sorrows.

In a culture that demands immediate gratification and avoids suffering at all costs, My Name is Kenny I Can’t Talk reveals the positive impact of embracing our lives through both the joys and the sorrows.

Lynda Holler recognized that her husband was making an impression on people. She had heard random comments throughout their 22-year marriage and Kenny’s 21-year battle with head and neck cancer, but over his last two years it intensified. Acquaintances, almost strangers, medical professionals, and even children wanted to tell her what he meant to them and the impact his life was making on their lives. By the time the advancing cancer finally claimed his voice, she found written in his notebook, “My name is Kenny I can’t talk,” and a series of revelations regarding Kenny’s silent influence led to this book. This compilation of reflections from 207 people on their time with Kenny professes powerful truths on love, friendship, service, sacrifice, redemptive suffering and the inestimable value that ripples out from each of our lives to every other human being.

Men and women both will enjoy my book. I believe that it is appropriate for adults of all ages and even could appeal to some teens. I have an influence with and intend to market to seriously ill patients and their caregivers, medical professionals, Christians, Respect-Life Groups, firefighters, therapists, and reading groups.

Size- 8.5x11 to correspond with Kenny's notebook, where this idea started. The reflections inside can look like people have written in Kenny's notebook. We intend to choose a casual font for the text.

I would like to have Kenny's words in his handwriting on the cover for the title. I have attached a scan of that image.

I would like to have something that represents the FDNY on the cover because that was a big part of who Kenny was. Plus, people like firefighters and it should have appeal. I have attached a scan of the patch of Kenny's firehouse Ladder 116, the Flaming Skulls. I also attached his gold Maltese cross that he wore with his badge number. I envision that red could be a good color for the background as another nod to the Fire Department, but I am open to suggestions here.

Our Christian faith was a key reason why we were able to approach our difficult life the way we did, why Kenny was able to endure his suffering well, and why our sons and I are doing well now. Faith in Jesus Christ is an important message.

Other communities that speak in the book are
• St. Lawrence O’Toole Parish – our church
• Brewster, NY Community, especially Brewster Little League. Kenny was a baseball coach for many years and many adults and children were impacted by Kenny and spoke for the book.
• Memorial Sloan Kettering Cancer Center – medical professionals from here and other medical practices spoke for the book and want to get this book into the hands of their terminally ill patients.

I do not want you to be limited to this idea, but I found a book cover that might be one idea for my cover - I have attached the image of 21-Day Sugar Detox. It has a spiral notebook on the cover with images around it and the title is written on the notebook, like Kenny’s notebook page could be the cover of my book. The images around it could represent our communities. I do not want to be limited to this idea, but I thought it had some merit to consider.

Comienza ahora
#1 NYT Bestselling author of Chicken Soup for the Soul's new book to uplift people in hard times
799 USD
Men and women 27-87. Adults, any gender, any race, any location. This is a book to help people needing positivity and ar
199
entries
38
designer
We need an EYE-CATCHING, STOP IN YOUR TRACKS, book cover for our Personal Finance Lead Magnet
199 $
Anyone who has an interest in personal finance. Generally, 18+, male and female, and primarily in North America.
34
entries
6
Designer
Book Cover - "A Brave Heart by William Wallace", a memoir of recovering from traumatic ski accident
1 199 $US
The book is for people who have been dealt a serious setback in life and are looking for motivation or guidance on how t
125
entries
16
designer graphistes
Book Cover Design - (Front Only)
£ 159
Men & women 30-50 years old 1-2 stone overweight
72
entries
11
designers
Design a book cover that includes a backround that looks like blue blueprint paper.
US$ 399
- Any high school students who are looking to attend college. - College freshmen and sophomores. - Students looking
9
entries
3
designers
Modern art nouveau-style fantasy cover for printed book. Ebook cover project to follow.
£ 319
Primarily for adults, but younger readers would enjoy it too. A general audience that likes epic fantasy with psychologi
8
entries
2
Designer
Más información sobre diseño de portada de libro o revista
Vea como funciona