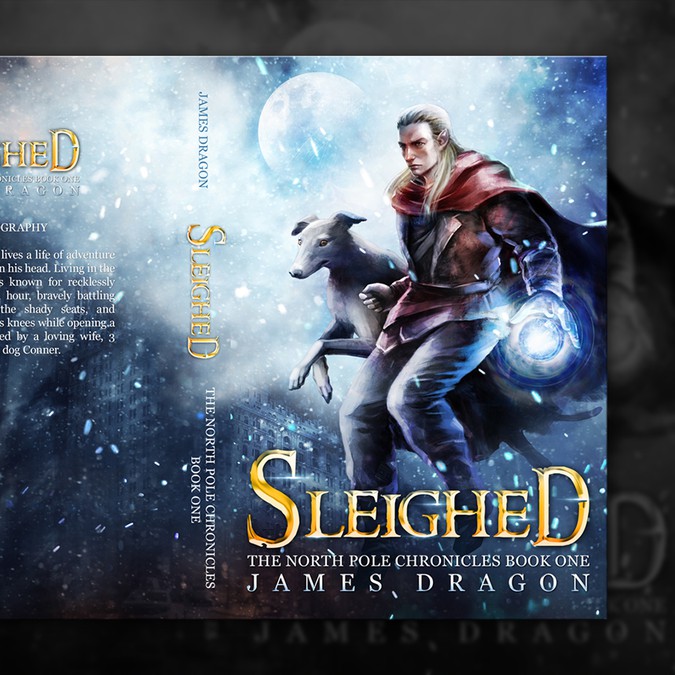 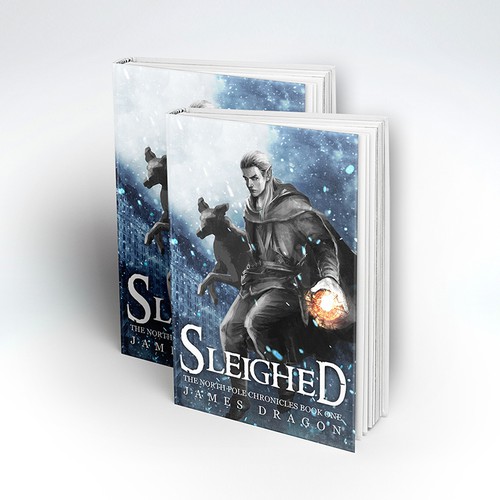 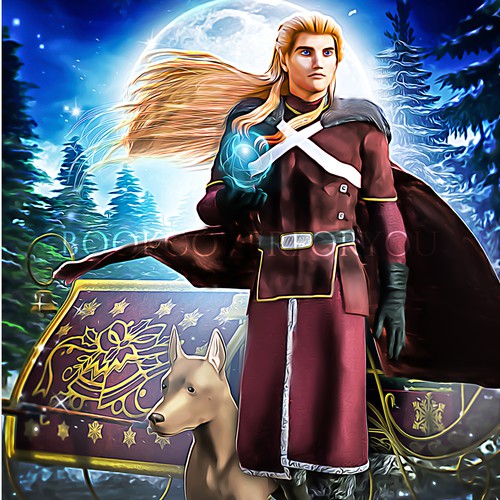 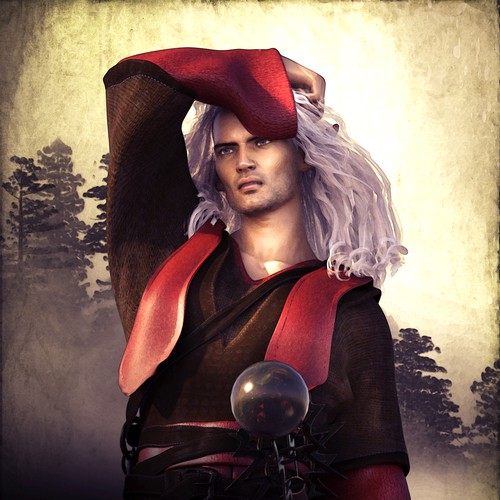 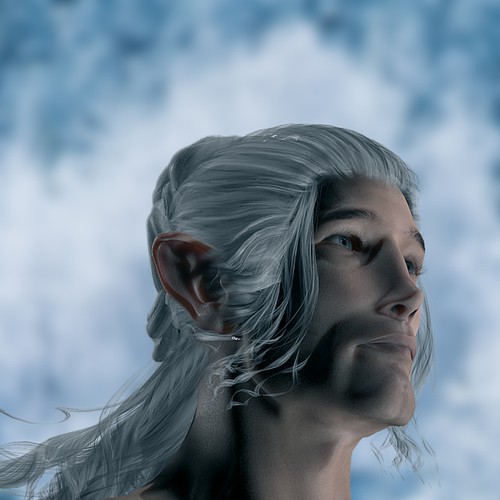 James Dragon lives a life of adventure and danger, though mostly in his head. Living in the wild west of Arizona he is known for recklessly filing his taxes at the 11th hour, bravely battling soccer mom hordes for the shady seats, and occasionally driving with his knees while opening a bag of chips. He is tolerated by a loving wife, 3 rowdy boys, and his faithful dog Conner.

Sleighed is a twist on the Santa Claus myth. In Sleighed, Santa really does exist, but he's actually an elf named Sinter Ni'Klas from a world called Erethielle. He's not an elf in the traditional Santa Claus sense (i.e. 2 feet tall, clad in green felt, full of Christmas cheer) but rather is quite tall and thin (think Lord of the Rings elves) though he does have the traditional pointy elf ears.

Sleighed is a young adult fantasy novel that tells the story of Sinter Ni'klas - the real Santa Claus - and his wife Ti'elle, rulers of the elfish kingdom of Erethielle. Their world and ours are magically connected; Erethielle produces the magic that Earth needs to survive, and Earth consumes Erethielle's excess magic that would otherwise burn it to a crisp. Every Christmas Eve, the barrier between the two worlds grows thin enough for Sinter to deliver the magic that the Earth needs to sustain its existence and, in the process, he prevents the destruction of both worlds. Thus, the fate of the two worlds depends on Sinter's yearly trip.

However, this year there is a problem. Factions within the populace are protesting the continued delivery of such massive quantities of magic to the Earth, demanding that it remain in Erethielle. With less than one week until Christmas Eve, the magic intended for Earth - which Sinter has been faithfully collecting all year - is stolen, imperiling his visit. While Sinter pursues the thieves outside the kingdom - encountering hostile armies, snow monsters, trolls, traitors, and angry unicorns - Ti'elle is attacked and kidnapped as part of a plot against the crown.

Sleighed is an irreverent romp across the Kingdom of Erethielle as Sinter fights to literally save Christmas.

Sleighed is Young Adult fantasy. Typical readers would be both boys and girls in the 12 to 25 year old age demographic.

Sleighed is a traditional fantasy genre book, though it doesn’t take itself too seriously. I would like the style to be a somewhat traditional fantasy book cover, meaning that a true to life character illustration would be prominent. A less is more approach with lots of primary colors seems best, though I’d certainly defer to design professionals. I would prefer that the character art on the cover include both Sinter and Ti'elle with, perhaps Bo, the dog, included (see character descriptions below). I'd like the characters' personalities to be evident in the art. Bonus points for subtly tying traditional Christmas imagery into the art (fir trees, wreaths, green and red and gold, etc.) I don't want the cover to feel too cluttered, so if there is only to be one character on the cover I would want it to be Sinter.

SINTER
He is the King of Erethielle and the “Santa Claus” figure in Sleighed. He is quite tall and thin with unkempt straw colored hair and blue eyes. Sinter frequently acts without thinking which gets him into trouble more often than not. He isn’t very keen on the pomp and ceremony that comes with being the king, he’d much rather be one of the “regular elves”.

TI’ELLE
She is the Queen of Erethielle and Sinter’s wife. She is of average height and very slender. She has a pretty face framed by shoulder length dark brown hair and green eyes. Ti’elle was injured as a young girl and cannot walk. She uses the elfish version of a wheelchair. (More on that below) Ti’elle is far more serious and “proper” than her husband and performs her duties as Queen with gravity and care. Her personality is a good counterpoint to her husband’s brashness.

THERENGAILE
The magic in Sleighed is packaged into small orbs called Therengaile. All of the magic in the book is used by first crushing, gouging, smashing, etc. a Therengaile. Therengaile glow a faint bluish white and three can just fit in a handful. Therengaile might be incorporated into some of the character illustrations.

SLEDGES
Sledges are essentially flying sleighs or sledges without the runners that are pulled through the air by an animal. Sinter’s favorite sledge is his battle sledge. It is pulled by a massive chestnut colored horse named Thain. Sinter’s battle sledge is essentially an elongated chariot without the wheels. His sledge is a resplendent white, with ornately carved and polished silver trim lining the edges of the vehicle. The interior is decorated in the same motif, and includes finely worked leather and gold edged foot harnesses that prevented Sinter from tumbling out of the sledge at high speeds.

TIELLE’S CHAIR
Ti’elle’s “wheelchair” is essentially a very small sledge. It consists of a polished rectangular wooden base measuring about three feet wide by five feet long and is one foot thick with elegant rounded corners. A red velvet cushion and back rest sit on top of the base, with the gilded Therengaile chamber and chair controls positioned next to the seat. Like a full size sledge, Ti’elle’s chair has a small harness and is pulled by a female greyhound dog named Jule. Jule is white with red brindle markings. Ti’elle will always be sitting in this chair with Jule nearby.

DOGS
As mentioned, Ti’elle is always in the company of Jule, a white greyhound dog with red brindle markings. Jule is a very mild mannered, even timid, dog. Ti’elle and Jule love each other very much.

Sinter is also usually in the company of a greyhound named Bo. Bo is a pure grey in color. Bo is a very spirited dog who barks, runs, jumps, and basically makes a nuisance of himself. Sinter and Bo have a complicated relationship. Bo adores Sinter, but Sinter is outwardly not fond of Bo – Ti’elle insists that he always take Bo with him for protection. Sinter is usually trying in vain to get the dog to behave.

Comienza ahora
Design a stand-out Book cover for 'Remember Who You Are'
AU$ 399
Remember Who You Are is for those who have been getting this niggling feeling that there is more to life. It's for those
96
entries
22
designers
YES, DADDY: A GUIDE TO BECOMING A SUGAR BABY
799 $
- College Girls Ages 17 - 38 - Single Women - Girls who are interested in being a sugar baby. -> https://en.wikipedia.or
99
entries
25
Designer
Modern Self-Improvement Book Cover Design called "Spiritual Sagacity"
799 $US
Christians Businessmen Self-Improvement Interested Individuals 15-60 United States, Europe, Africa, South Africa, S
217
entries
37
designer graphistes
Kickass Cover Design for Book on Immigrant Entrepreneurs in the US
1.099 CA$
immigrants, entrepreneurs, business owners
169
entries
36
Designer
Create a award winning book cover
399 $
Men between the age of 25 to 40
120
entries
32
Designer
On Winter's Eve, the first of two to four titles in this series.
399 US$
Children to adults. It's a very mature middle-grade novel meant to be enjoyed by a wide audience. It has aspects of a fa
43
entries
17
designers
Más información sobre diseño de portada de libro o revista
Vea como funciona