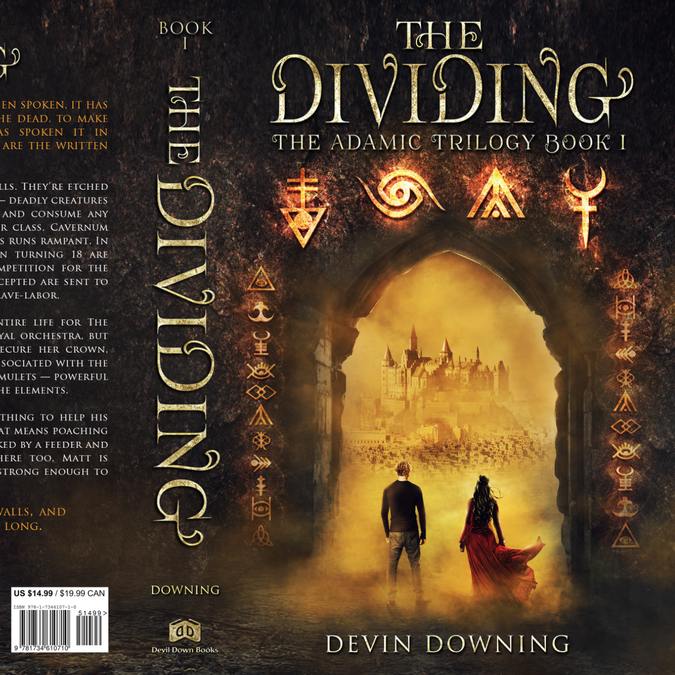 Design a book cover for a young adult fantasy novel 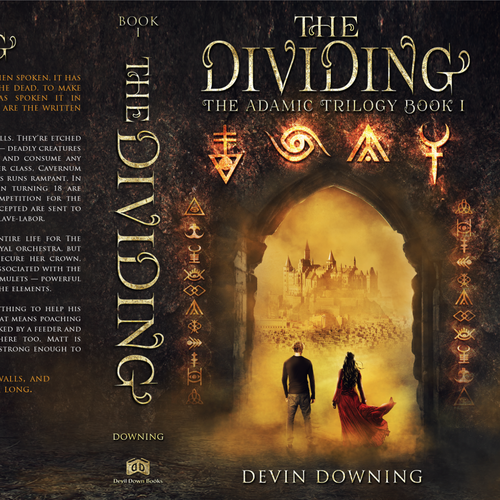 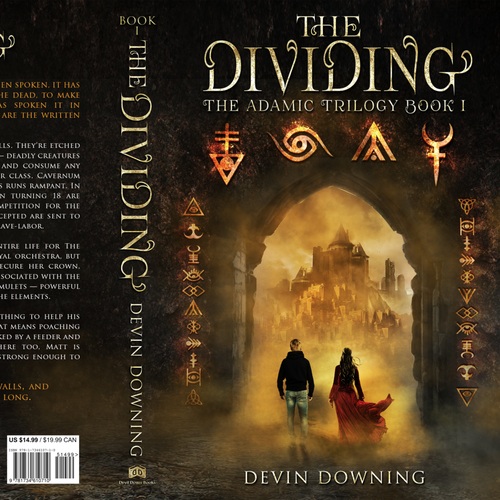 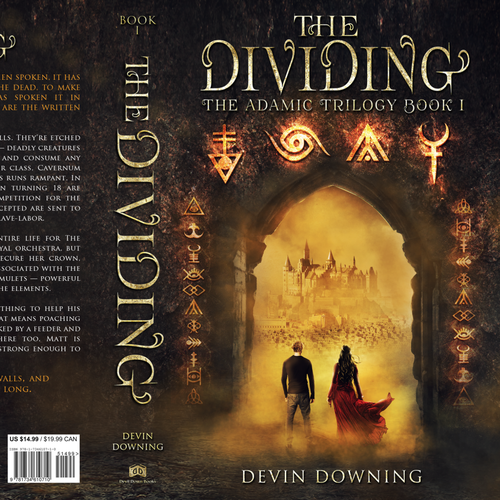 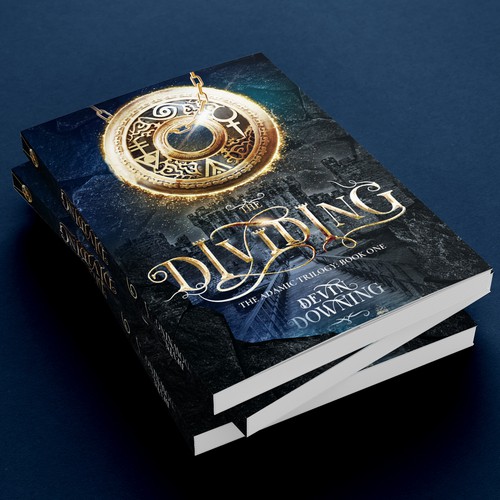 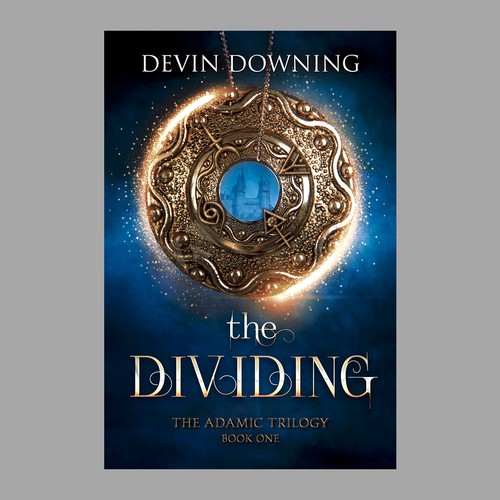 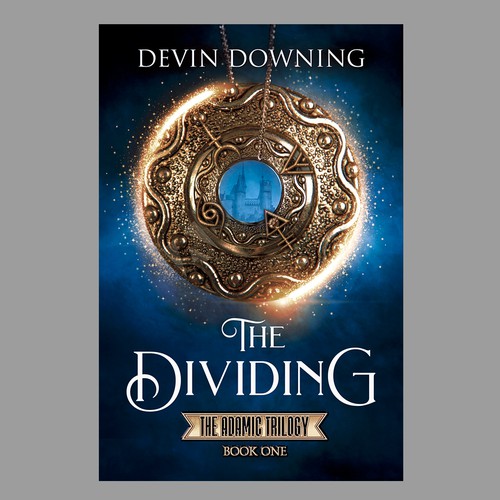 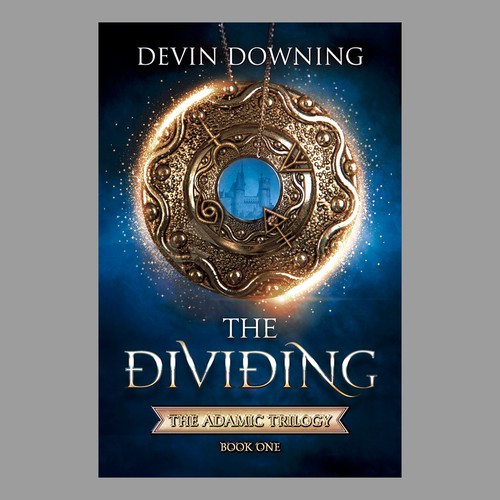 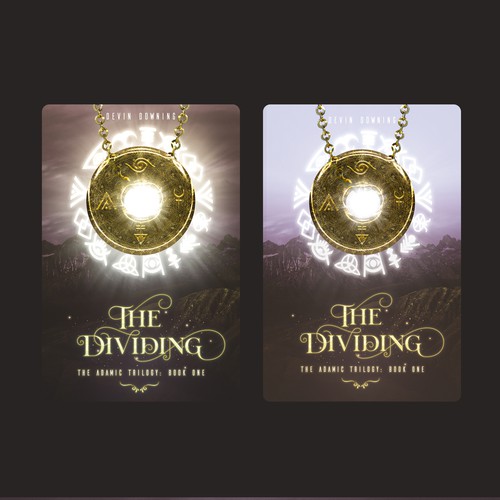 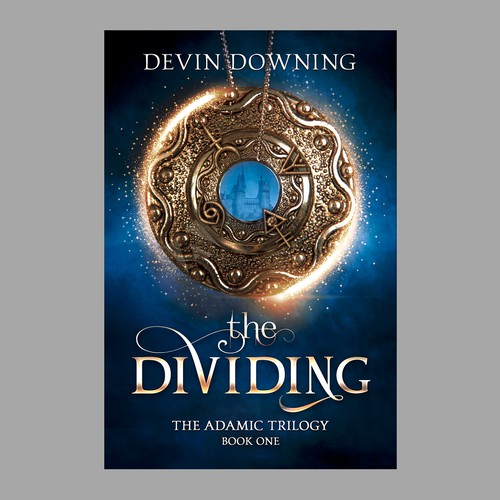 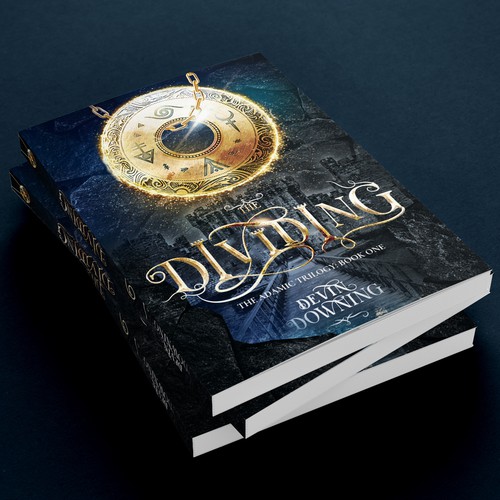 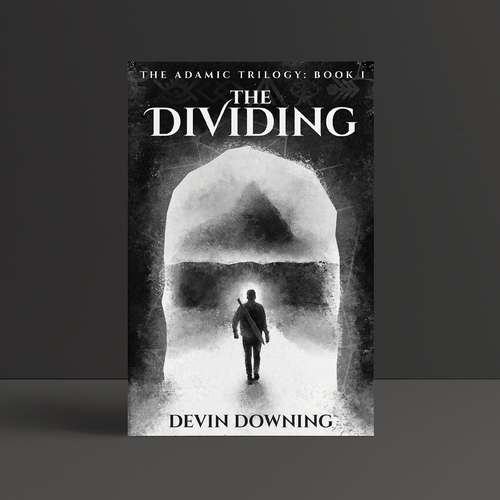 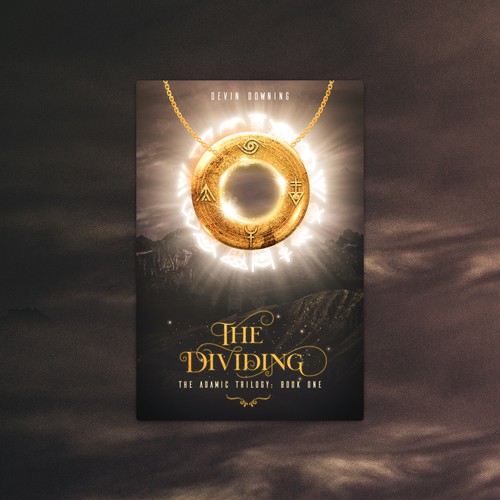 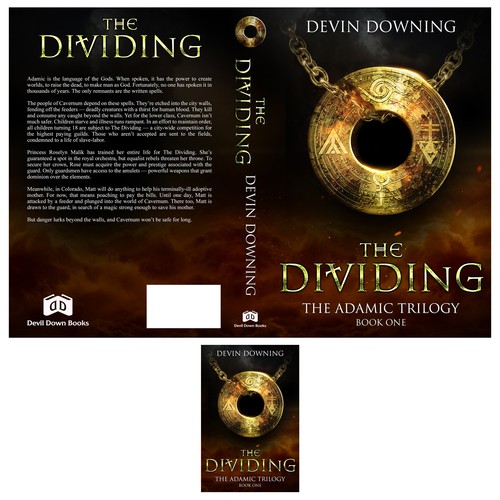 Devin Downing grew up in Temecula, California, spending his childhood reading books on the beach and bashing bones at the skatepark. Today, Devin lives in Provo, Utah with his drop-dead gorgeous wife, Melissa. Apart from crafting complex stories, he enjoys hiking, ice-hockey, and writing about himself in the third person (yep, it's me! Hi, guys!). Devin is currently studying neuroscience at Brigham Young University because he wants his friends to think he’s smart.

Learn more about Devin at devindowning.com

Blurb:
Adamic is the language of the Gods. When spoken, it has the power to create worlds, to raise the dead, to make man as God. Fortunately, no one has spoken it in thousands of years. The only remnants are the written spells.

The people of Cavernum depend on these spells. They’re etched into the city walls, fending off the feeders — deadly creatures with a thirst for human blood. They kill and consume any caught beyond the walls. Yet for the lower class, Cavernum isn’t much safer. Children starve and illness runs rampant. In an effort to maintain order, all children turning 18 are subject to The Dividing — a city-wide competition for the highest paying guilds. Those who aren’t accepted are sent to the fields, condemned to a life of slave-labor.

Princess Roselyn Malik has trained her entire life for The Dividing. She’s guaranteed a spot in the royal orchestra, but equalist rebels threaten her throne. To secure her crown, Rose must acquire the power and prestige associated with the guard. Only guardsmen have access to the amulets — powerful weapons that grant dominion over the elements.

Meanwhile, in Colorado, Matt will do anything to help his terminally-ill adoptive mother. For now, that means poaching to pay the bills. Until one day, Matt is attacked by a feeder and plunged into the world of Cavernum. There too, Matt is drawn to the guard, in search of a magic strong enough to save his mother.

But danger lurks beyond the walls, and Cavernum won’t be safe for long.

The book is written to a young adult audience grades 10-12 (ages 16-18). It should appeal to both girls and boys. It is primarily fantasy, but has some strong romance elements as well.

I could see my book being one of three potential styles. I will describe each one and attach an example book cover to help illustrate. I’ll give a lot of information to help reduce the number of revisions.

Cover style one:
In my novel, an ancient language of written spells is one of the most important magical elements. I could see my book having a relatively simple cover, with symbols being the center of attention. An example of this is the book “Child of the flames” (attached below). This could be a view of the city wall with its symbols, or the amulet with its symbols in the foreground. The symbols could also be used as a border of the cover. In the cover for “child of the Flames”, I also love the high contrast and bright metallic lettering. I hope to see this in my book cover except gold. (descriptions of the city wall and amulet are included below. Images of the symbols are attached below as well.)

Cover style two: The cover would use the city as a background and show a medieval-style city on the side of a mountainside. In the foreground of the cover, the image of the amulet could also be used as previously descibed. I imagine this cover looking like the cover of “The Demon King.” (Attached below.) In the novel’s cover, I really like the dynamic contrast and artistic nature of the fog and the background shading. (Below is the amulet description as well as the city description. There's also an attached map to help visualize the city.
Another idea: the open archway of the wall could be in the foreground, and the city could be viewed in the distance through the archway. That would be cool too.

Cover style three:
I imagine the book cover to be split in half by a cross-sectional view of the wall. The wall can intersect the title near the upper portion of the cover and replace the center 'I' of 'The Dividing'. Then, a silhouette of the two main characters, Matt and Rose, could be put leaning on either side of the wall. Matt’s outline would be wearing something that looks like a snug-fitting black combat uniform, and Rose could either be wearing a fancy dress, or a tight fitting combat uniform as well. The very edge of the cover could be outlined by pine trees. Or, one side of the wall could have a lighter background showing the safety of the city, and the other could have a dark forest representing the danger outside the wall. (Matt and Rose's descriptions are added below.)

Amulet description:
The pendant is round, with a gaping hole in the center. The middle is thicker than the edges, like a smashed donut coated in gold. Rather than sprinkles, the golden donut is decorated with intricate ridges and interwoven gold strands. A thin gold chain loops around my neck and through the center of the pendant. Engraved around the center are what intrigue me most of all: strange symbols.
(symbols attached below. The amulet symbols are the image with 4 symbols)
(I attached a sample pic of the amulet below. It isn’t exactly accurate – the chain should go through the center and the symbols are slightly off – but it gives you an idea. The beautiful and artistic, the better.

City description:
“I look up, and my jaw drops open. It takes a few seconds to register what I see. Up ahead, the road collides with a stone archway. It’s the opening of a wall that stretches as far as I can see in both directions. It’s not a chain-link fence, but a real wall. A 50-foot-tall stone wall like in medieval times. There are huge symbols carved into the side of the stone wall. Some are several feet tall.
(symbol image attached below. The wall symbols are the image with 11 symbols)
On the other side of the arch, the road continues, but the forest is replaced with an enormous field of grass and small bushes. The road cuts a straight line through the center of the field, corn stalks and grapevines on either side.
But most impressive is what’s beyond the field. Off in the distance, clinging to the mountain, are rows and rows of square buildings. They layer the mountainside like the dull-colored scales of a sleeping dragon.
I tilt my head back to take it all in. A whole city has been hidden in the mountains. All the buildings cling to one central mountain peak.”
(see map for better visualization)

Here are some more details about the city. It’s based on medieval Europe and has no technology. The wall is stone. It is based of your typical medieval stone wall. And the symbols are carved/embedded in the wall. They don’t glow, but I imagine the indentations being coated/lined with gold. And these symbols are big, maybe 5-10 feet tall, and spaced side by side along the entire length of the wall. They repeat the 11 symbols over and over.

Overall, feel free to tweak the description slightly if it makes the cover better. I can always adjust the description in the book easier than I can create a good cover.

Matt description: “He has prominent cheekbones and full, soft lips. A small cleft in his chin is the only bump on his smooth jawline. He’s taller than I initially realized. Sitting down, my eyes only come to his lips. I try not to stare at them as they move to shape words. He’s handsome in a different way than Antai. Not quite as rugged. I almost want to use the word ‘beautiful’.”
He’s tall 6’2 or 185 cm
He has blonde, wavy hair.

Rose description: “My nose is small and slightly turned up. I have full lips, a tapered face, and my almond brown skin is smooth and clear. I like the way I look, but I’m not nearly as gorgeous as my mom. Her portrait hangs next to my own. She was elegant and tall with copper skin and curly brown hair. Her eyes were a beautiful, bright hazel. Fortunately, I inherited her eyes; they’re my most stunning feature.”

Font preference: I like the font used in “House of Salt and Sorrows.” I like how the font is somewhat personalized and has coloring to make it look 3D. Also, I like the gold color. On my cover, I would love if the 3 I’s in “The Dividing” were long and exaggerated. They could even be made to symbolize the three walls of the sanctuary. Just an idea. Or they could just be big and cursivy.

Example covers: the following books are attached as examples that I like: Ash Princess, The heart of Betrayal, An Ember in the Ashes, and Kingdom Untold.

*In the end, you’re the specialist. Feel free to take liberties and do what you think will look good! Let me know if you have any more questions! :)

I want the cover to be bold and high contrast, but I don’t want too many colors. I really like blacks and golds and tans. Oranges and blues could be alright as well, but I don’t want it to be too colorful. I also don't want anything too cartoony or childish. The cover should appeal to the age range of 16-20.

Comienza ahora
Coming Out with Christ - (A Spiritual Journey To Finding My Resurrected Identity)
USD 399
“A must-read life story of love and grace for our LGBTQ people, and every pastor, church leader, Christian, family membe
81
entries
17
designer
We need a powerful book cover for a Science-Fiction novel
EUR 359
The target audience is between 25-45 years old, speaks French (France, Canada, Belgium, Switzerland), who likes Sc-Fi
67
entries
12
diseñadores
Contemporary Romance cover
USD 399
Readers who like contemporary romance with young professional characters engaged in timely events
44
entries
12
diseñadores
The Death of Neo-Darwinism
US$199
This is a hot topic and would be of interest to anyone in the academic community regardless of the discipline.
26
entries
11
diseñadores
Book cover for non-fiction
199 USD
162
entries
14
designer
Captivating cover for the book "The Way Home"
299 US$
People in general interested in life stories. People that struggle with addiction.
121
entries
49
diseñadores
Más información sobre diseño de portada de libro o revista
Vea como funciona