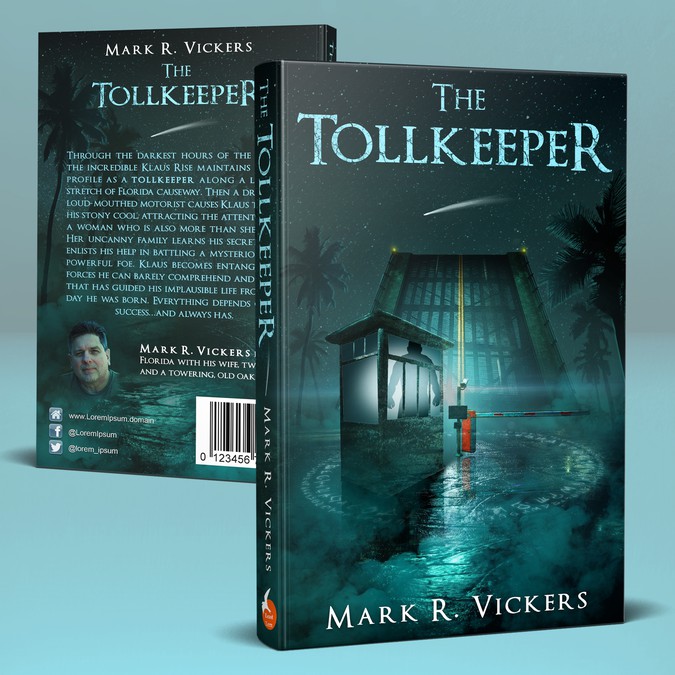 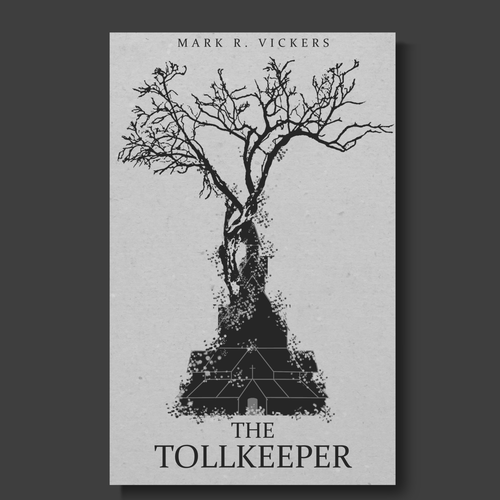 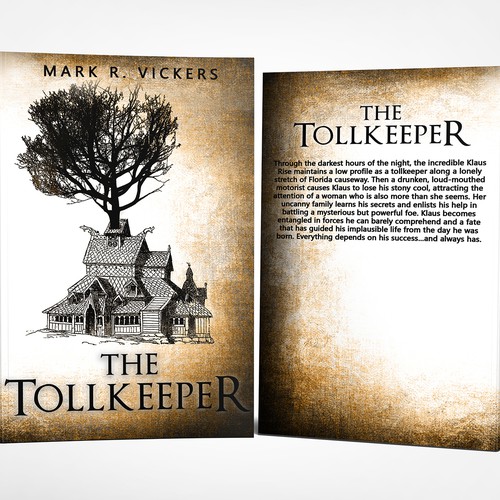 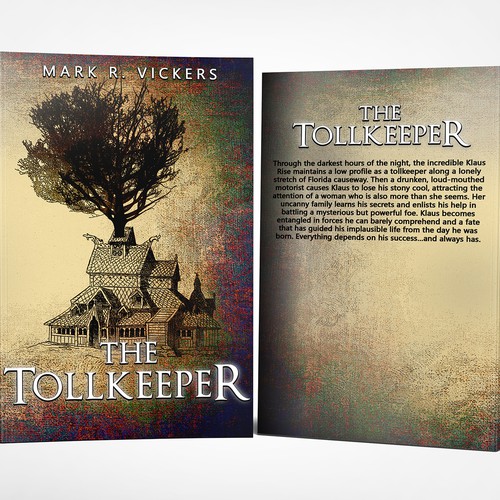 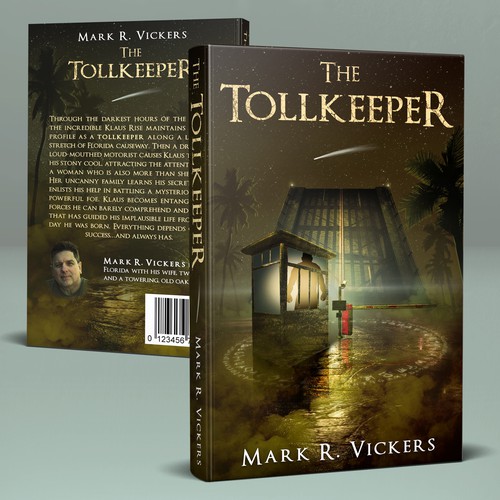 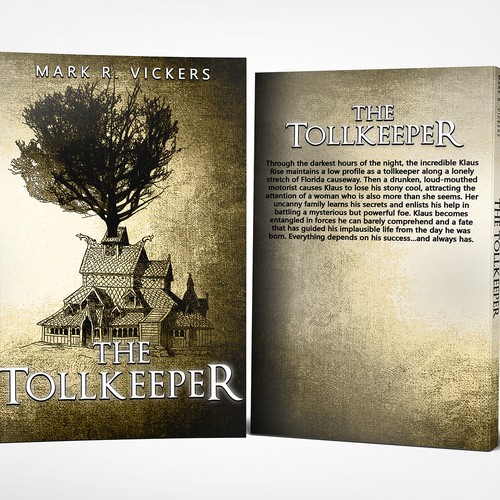 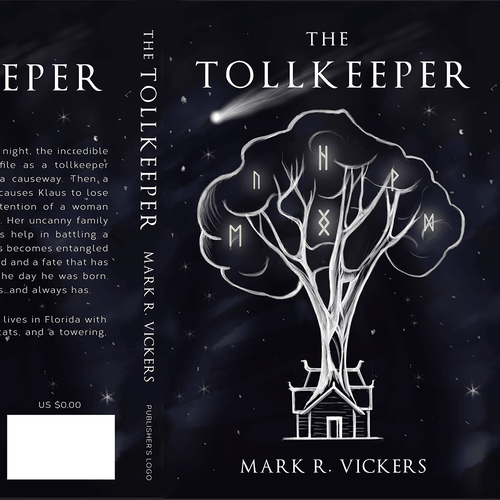 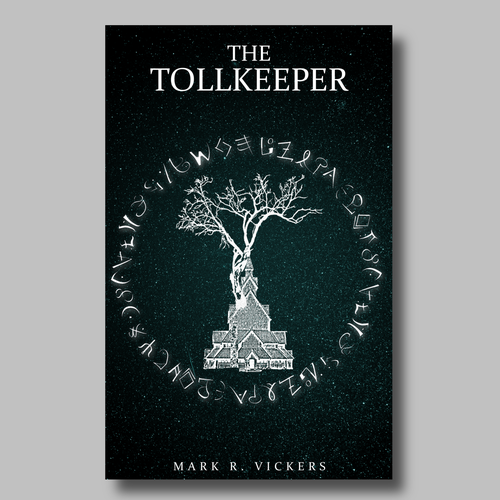 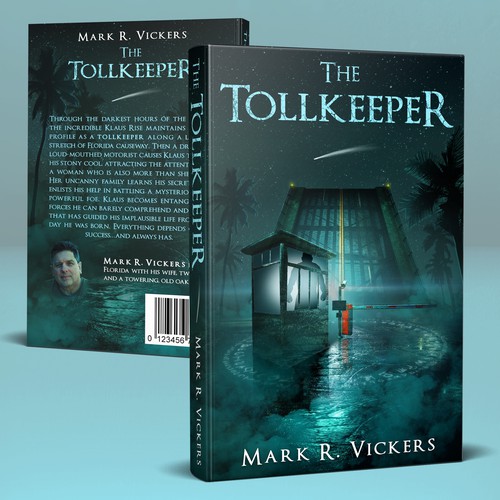 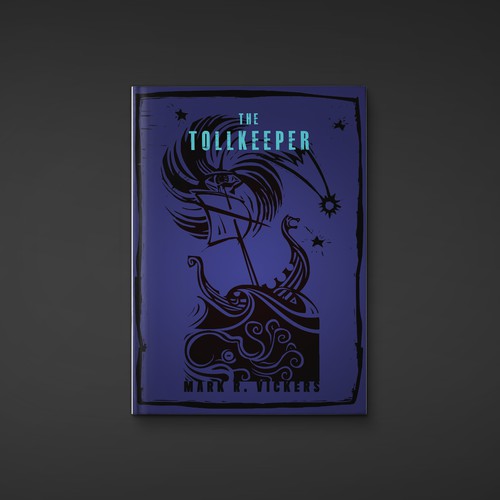 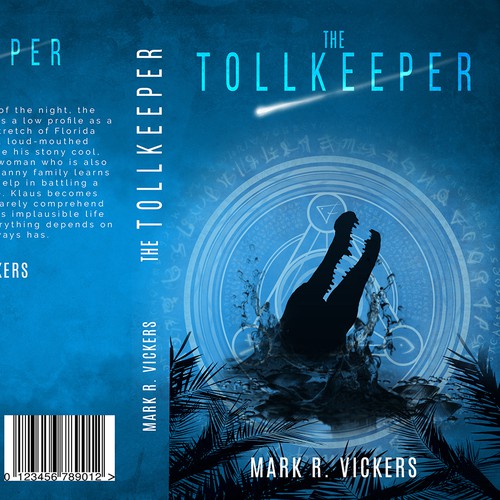 Through the darkest hours of the night, the incredible Klaus Rise maintains a low profile as a tollkeeper along a lonely stretch of Florida causeway. Then a drunken, loud-mouthed motorist causes Klaus to lose his stony cool, attracting the attention of a woman who is also more than she seems. Her uncanny family learns his secrets and enlists his help in battling a mysterious but powerful foe. Klaus becomes entangled in forces he can barely comprehend and a fate that has guided his implausible life from the day he was born. Everything depends on his success…and always has.

If it can work aesthetically, I’d like to see a nighttime view of a Florida tollbooth with a large, threatening person inside the booth, a down tollgate, a looming drawbridge in the dark beyond, something to indicate Florida (perhaps a palm frond/tree) and possibly a small portentous comet in a corner of the the sky. Not all these elements are necessary, however, if it has the right feel to it. I’m not looking for a traditional sci-fi or fantasy cover but, rather, a cover that suggests a little more literary intent. The protagonist (the tollkeeper of the title) is a half-troll who can pass, though barely, for a large human being in an urban, Florida landscape. I'm not committed to any font but designers may want to look at Optimus Princeps to see if it works for something.
There are other theme ideas:
• runes around the perimeter of a central image,
• a Viking ship helmed by a character in a dark hood
• an alligator attacking a figure from beneath the water, perhaps with a comet in the night sky
• a large ash tree growing through the roof of a medieval stave church
• a large figure troll-like figure (see paragraph above) riding a Harley through a forest
• a group of Viking warriors, one of whom stands out against the rest due to sheer size, wearing a darkened, screen hood
• a woman in Harley great carrying a sword and a figure looming in the background behind her
• a woman and large man battling a giant wolf in a great hall

Here's a synopsis:
The Tollkeeper is a first-person narrative by Klaus Rise, a Florida tollkeeper. The novel includes the narrator’s back-story interspersed with chapters recounting a contemporary mystery. In the modern story, Klaus encounters a woman named Hildy after he impulsively decapitates her douchey, Jaguar-driving date. Impressed, Hildy recruits him to defend her family’s backwoods estate in Central Florida, which is in danger of being seized by the state. He starts his job by taking a knife to the arm and pool cue to the head. Things only get worse from there. He helps a herd of pecking, puking swans rescue Hildy from deadly scum in a Florida spring. Then he’s nearly killed by a mutant gator in a corpse-laden swamp where a Corps of Engineer regulator is sacrificed. After being resurrected in a rural animal hospital, Klaus battles DOT bureaucrats in Tallahassee, bribes the governor with Aztec gold, and falls hard for Hildy despite her multiple personalities. Just when things are looking up, Hildy’s Audry-Hepburneque, shades-wearing Aunt Skuldy drugs and seduces Klaus before nearly crushing him with a giant designer sandal. That’s when Klaus finds out Skuldy is the mastermind behind a political scheme and the leader of a nihilistic, Norse-loving gang of bikers called the Fendwellers. After Klaus nearly incinerates himself to win Hildy’s forgiveness, they wind up battling the Fendwellers, a cobra-like human, a giant wolf and a toxic chemical spill in order to preserve the Florida spring that is at the center of all the novel’s scams, schemes, seductions and loony savagery.

The Axe and Throne
https://www.amazon.com/Axe-Throne-B…KZIEGI/ref

The Shadow and the Claw
https://www.amazon.com/Shadow-Claw-…890176/ref

The Book of Lost Things
https://www.amazon.com/Book-Lost-Th…429348/ref

The Left Hand of Darkness
https://www.goodreads.com/book/show…f_Darkness

The Golem and the Jinni
https://www.goodreads.com/book/phot…-the-jinni

I'd like to avoid anything to looks too cheesy and stock. I'm not looking for fonts or images that telegraph horror.

Catchy book cover for children’s middle grade fiction.
199 USD
Children, ages 8-12.
3
entries
2
designer
Book cover for non-fiction
199 $US
Therapists or people interesting in treating certain symptoms using Dialectical Behavior Therapy.
289
entries
19
designer graphistes
YA Romance cover
199 $
Teen to adult
104
entries
27
Designer
Book Cover - "A Brave Heart by William Wallace", a memoir of recovering from traumatic ski accident
US$ 1.199
The book is for people who have been dealt a serious setback in life and are looking for motivation or guidance on how t
125
entries
16
designers
Modern looking eBook cover for weight loss, nutrition and lifestyle
£ 159
The overweight and obese People trying to get healthy Health conscious people People just interested in health and fi
184
entries
19
designers
Coming Out with Christ - (A Spiritual Journey To Finding My Resurrected Identity)
US$ 399
“A must-read life story of love and grace for our LGBTQ people, and every pastor, church leader, Christian, family membe
81
entries
17
designers