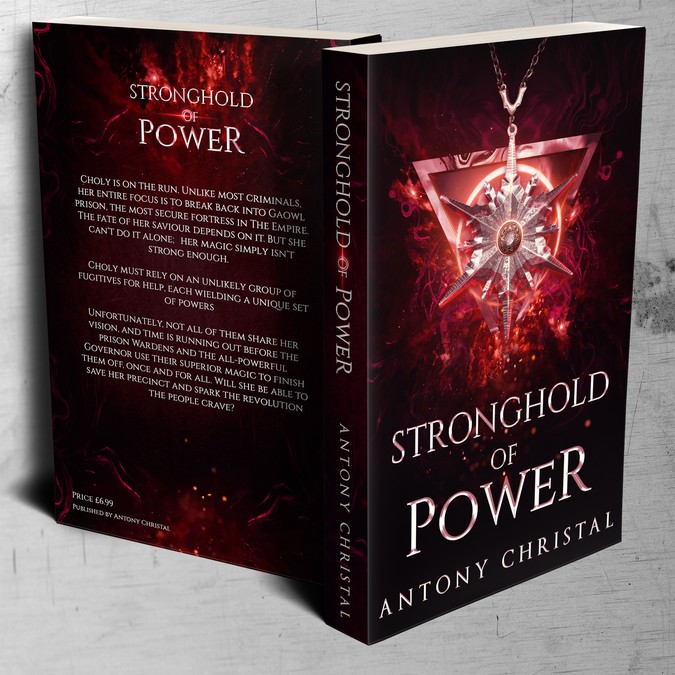 Design a fantasy book cover for a debut author 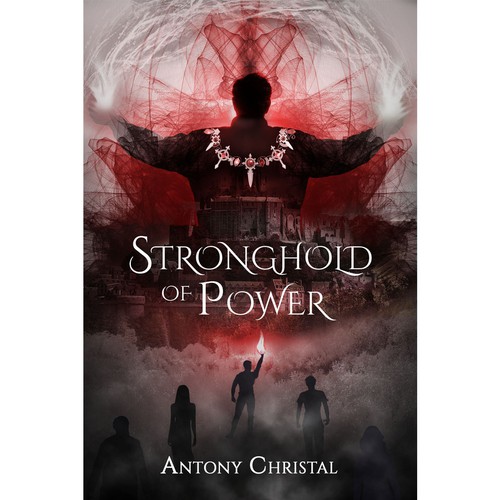 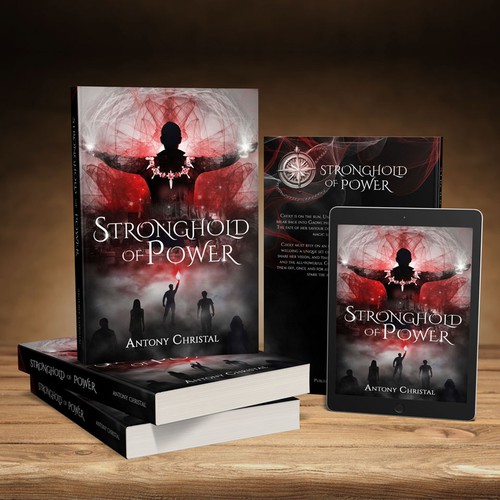 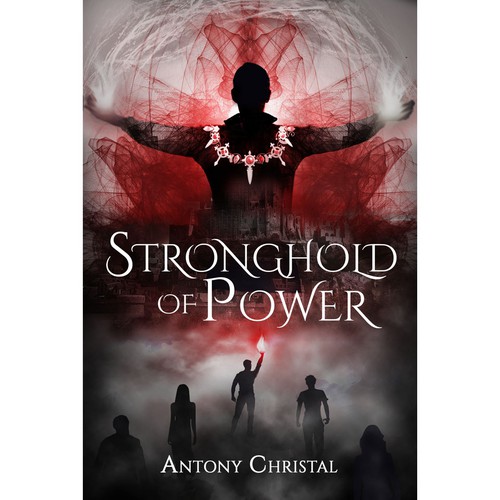 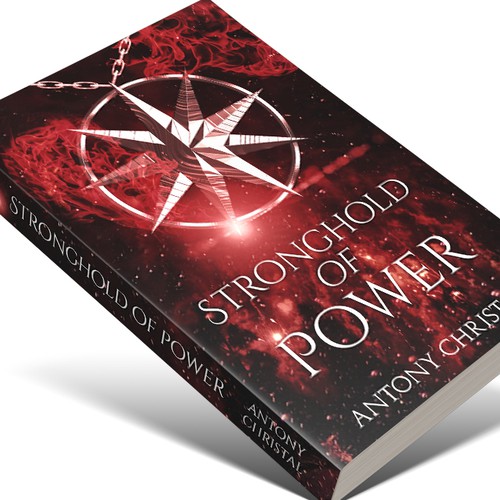 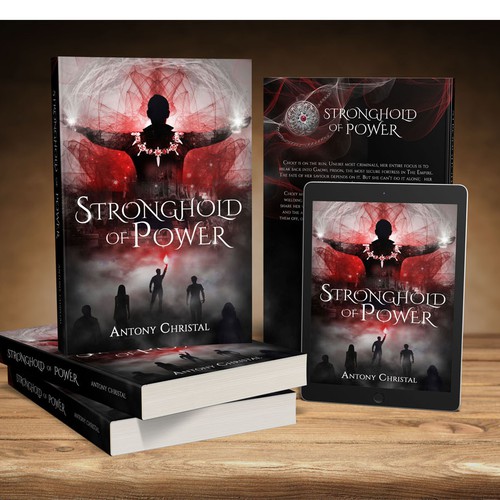 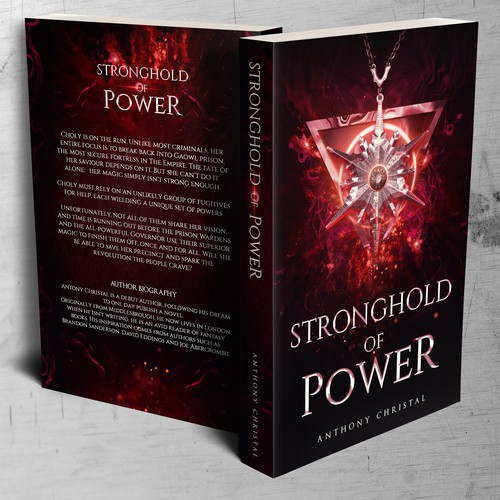 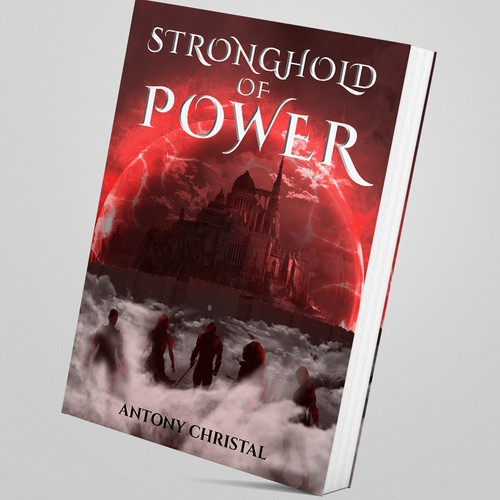 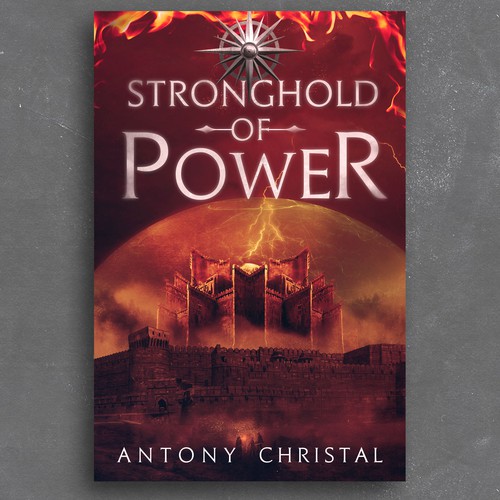 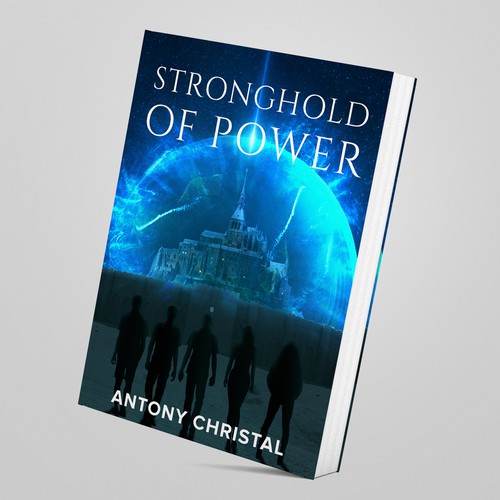 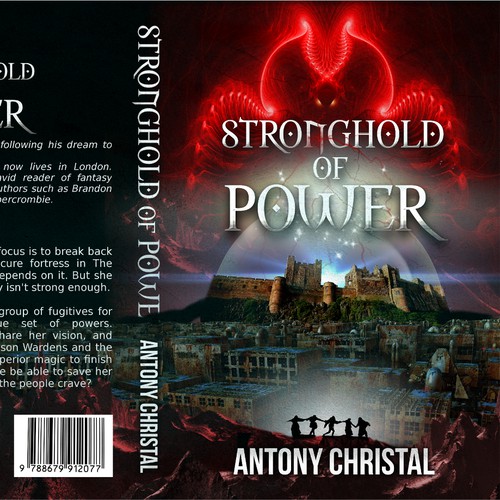 Antony Christal is a debut author, following his dream to one day publish a novel.
Originally from Middlesbrough, he now lives in London. When he isn't writing, he is an avid reader of fantasy books. His inspiration comes from authors such as Brandon Sanderson, David Eddings and Joe Abercrombie.

Stronghold of Power is the story of a group of 5 wanted criminals, hiding within prison state of Gaowl. A spirit gives them the ability to convert their emotions into different forms of elemental magic, each harnessing different powers. Although they all want different things, under the spirit’s guidance they work together to attempt to break back into the Empire’s maximum security prison (which is more like a fortress in appearance), save the spirit and unleash the magic to spark a revolution. Meanwhile, they’re being hunted by the magic-wielding prison Wardens and the elusive, all- powerful Governor. The story details their struggle to infiltrate the prison while staying hidden in the most heavily guarded and deadly precinct in the Empire.

Blurb:
Choly is on the run. Unlike most criminals, her entire focus is to break back into Gaowl prison, the most secure fortress in The Empire. The fate of her saviour depends on it. But she can't do it alone; her magic simply isn't strong enough.

Choly must rely on an unlikely group of fugitives for help, each wielding a unique set of powers. Unfortunately, not all of them share her vision, and time is running out before the prison Wardens and the all-powerful Governor use their superior magic to finish them off, once and for all. Will she be able to save her precinct and spark the revolution the people crave?

The target audience for this novel is new adults who will identify with the ages of and issues faced by the main characters. It would also be enjoyed by adult fantasy readers who admire the work of authors such as Brandon Sanderson.

Eye-catching and vibrant colours
Simple and striking cover
this could almost be a design for my book cover except the fortress in my book is not on a mountain (it is within the wider walls of a prison state) and there are 5 people trying to break back into the fortress/prison (three men, two women).
I like the use of fire on this cover

I’ve attached three images of book covers that I quite like:

a) Red aberrant and Shadow of the fox – I like that these are simple yet eye catching, and I like the red colours used.

b) The Iron Citadel – this could almost be a design for my book cover except the fortress in my book is not on a mountain (it is within the wider walls of a prison state) and there are 5 people trying to break back into the fortress/prison (three men, two women).

I have included below some descriptions from the book of things which could feature on the cover:

i) The stronghold – this would make sense as it is in the title. Here is the description of Gaowl Prison from the book, which is set in the centre of Gaowl, a walled prison state: “Although it was known as a prison, the word fortress might have been more appropriate. The only windows facing out from the enormous square complex of buildings were narrow loops for firing arrows out onto the street. The imposing stone walls of the prison reached above the surrounding buildings to end in lookout towers, twelve in total, each manned by archers. The battlements at the top of the wall were lined with a protective parapet … the building situated in the heart of the prison – the Governor’s stronghold – which jutted out above the outer walls. … it was decorated with elaborate carved features. All she could see [over the walls] was the enormous multi-coloured glass dome that topped the stronghold. … [An] immense [domed] glistening energy field ... formed a perfect seal with the outer perimeter wall, making the fortress even more impenetrable. The sunlight refracted through the energy field and exploded onto the central glass dome.

ii) Fire – one of the characters, Iyre, can control and fight with fire using his hands. This is the most visual of the magic powers in the book. Iyre is described as “good-looking … light blue eyes and white-blond hair, coupled with his lean but muscular frame” He would wear black.

iii) The Governor’s chain, wrought in gold with many large multi-coloured (each colour different) gemstones set into it. It is the weapon that the main enemy would rely on for their magic. It is described as “Governor’s chain, glowing brightly with luminous gemstones of every colour. Some gemstones seemed to glow two different colours, or a multitude of colours, depending on how the light caught them. They shone with a mesmerising luminescence that eclipsed the lighting in the room … The central stone was larger than the others, shining a radiant white, seeming to eclipse the others like a beacon.” I've included an image of what it might look like (although in the book it contains around 20 gems), EXCEPT that it is to be worn by a man, so it needs to be more masculine (perhaps crossed with a mayoral chain?).

iv) Another symbol that features in the book is a many pointed star (“the many pointed star of the Creator”). It is often described as being gilded in metal, with one of the points catching the light to show the way.

v) A final symbol that is relevant for the story is a silver chain and small pendant. The pendent is described as being etched with the “many pointed star of the Creator”. (It could perhaps be contained within a circle of silver metal, or etched onto the surface of a round silver pendant).

I am not keen on fantasy covers which centre around a person or character unless it can be heavily tailored to look like one of the characters from the book (a silhouette is fine).

Print dimensions
The Governor's chain (described in the brief) might look a bit like this, but with around 20 multi coloured gems and a large white gem at the centre. It should ideally be more masculine, like a mayoral chain with gemstones on it, but i can't find a suitable example image...
I've attached an example mayoral chain, but the Governor's Chain would be adorned with gemstones, so a cross between the necklace and this chain

Cover for the book "El Libro del Propósito"
299 $
personas en busqueda de su proposito individual gerentes o dueños de empresas que quieren transformar su empresa en una
174
entries
18
Designer
Book cover for non-fiction
$ 199
Therapists or people interesting in treating certain symptoms using Dialectical Behavior Therapy.
289
entries
19
Designer
Book design needed for RARE: Powerful New Ways of Being Together in a Mentorship
NOK 6.599
The reader is a person who is intellectually curious, seeking something new, different, and alternative.
651
entries
95
designers
Paperback/ebook cover for fiction, counterterrorism thriller
US$399
Fiction, thriller readers in the genre of Vince Flynn, Brad Meltzer, etc. Middle age males in the United States. I have
105
entries
31
diseñadores
'No Bullies Allowed' treefort with red-headed girl in the treefort.
$ 399
People who have been bullied or are currently being bullied. People who live with or have to interact with Narcissists
43
entries
7
Designer
Book Cover Design EBOOK and Paperback
319 £
Someone is reading this book because he wants to explore the vast universe of investment possibilities that the real est
91
entries
18
Designer

Comienza ahora
Modern art nouveau-style fantasy cover for printed book. Ebook cover project to follow.
£ 319
Primarily for adults, but younger readers would enjoy it too. A general audience that likes epic fantasy with psychologi
8
entries
2
designers
paper back and ebook cover
319 £
Someone is reading this book to understand how to get the best loan offer by boosting his three-digit credit score. He m
43
entries
8
designer
Creative Book Cover for a Female Dating and Relationships Title
$199
Women reading this book are usually younger and they’ve just been through a breakup. They don’t know how to collect the
150
entries
24
デザイナー数
paper back and ebook cover
£ 319
Someone is reading this book to learn the most effective way to write a to-do list that will keep them motivated and pro
51
entries
20
designers
The Garden of Shadows and Bones
$10,099
My books are geared towards New Adult. They are mainly about dark fantasy with witches and magic.
62
entries
24
diseñadores
The Stack Tester Diaries
239 £
Family
38
entries
14
designer
Más información sobre diseño de portada de libro o revista
Vea como funciona