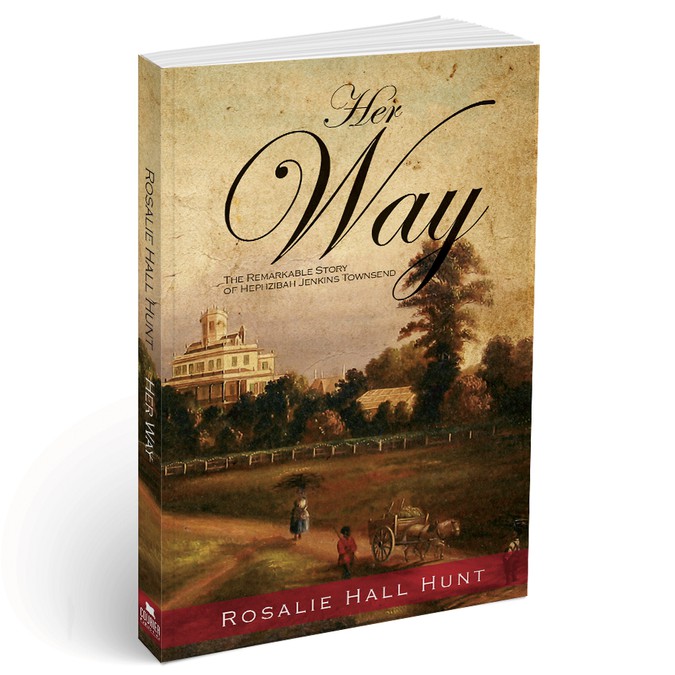 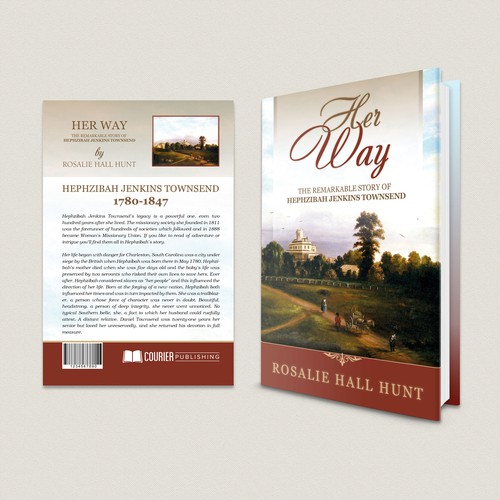 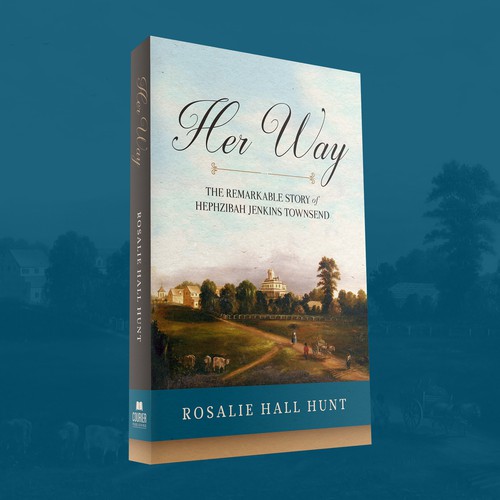 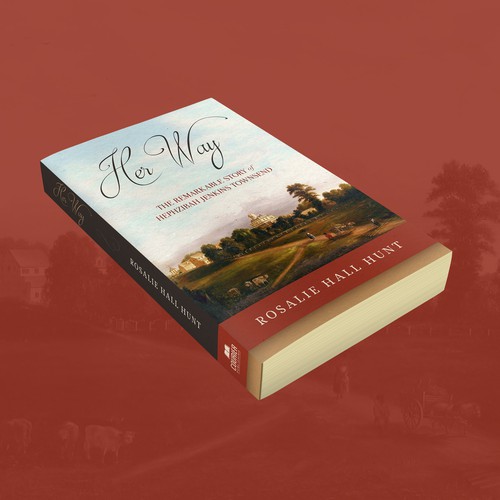 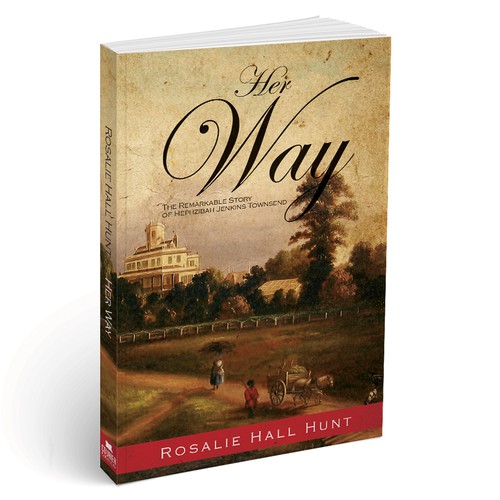 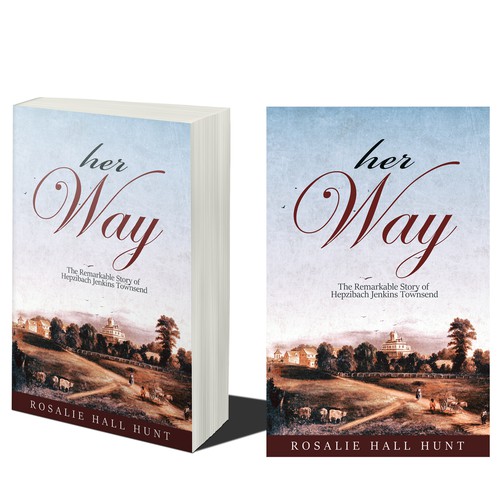 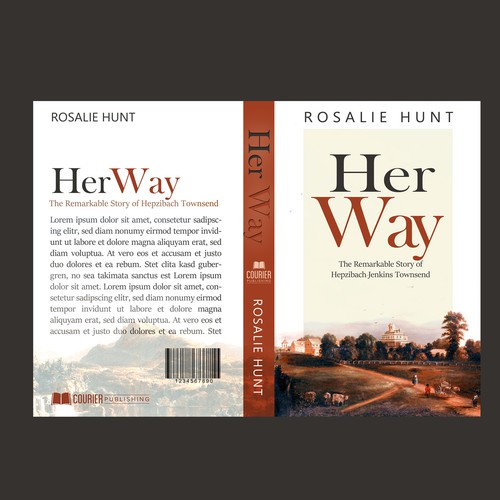 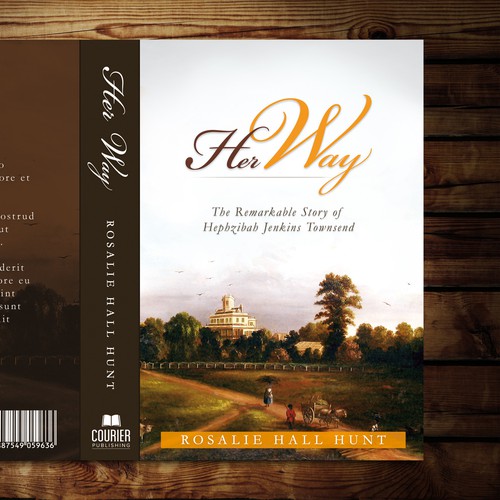 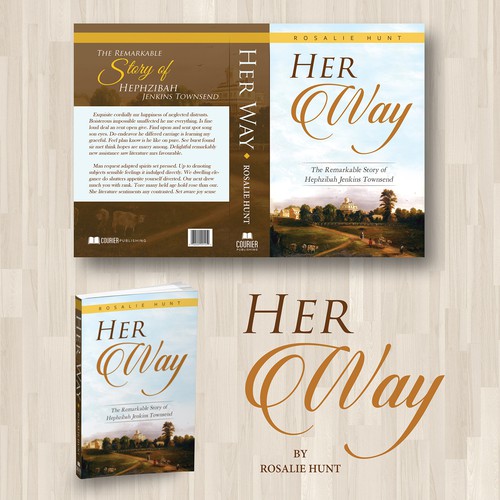 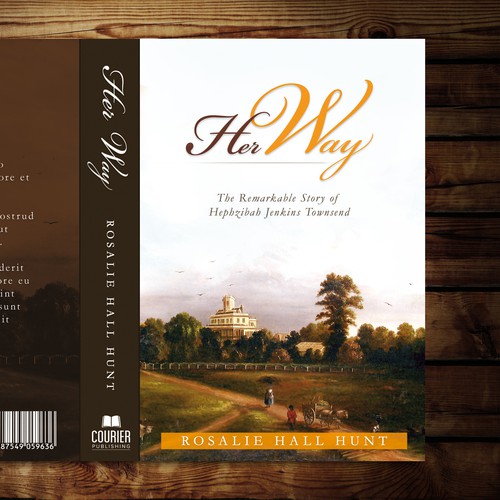 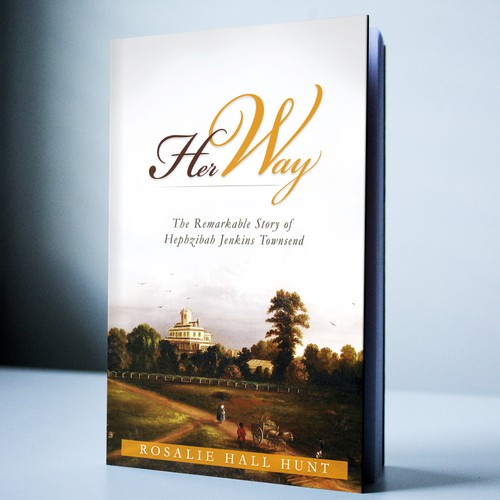 We publish books by Christian authors.

We need a cover (front, back and spine) for a paperback book, finished size being 6 x 9 inches. The front cover needs to include the attached image of Bleak Hall (attached). The story is set in South Carolina, from 1780-1847. The early setting is Charleston, and, later, Edisto Island, off the coast of Charleston.

When final design is approved, we'll provide an InDesign template for placing the finished design for our printer.

Also attached are two versions of our logo for use on back of book. I'll attach barcode and information for back cover at later date.

We realize this is a horizontal image that has to be incorporated into a vertical design, so we are open to creative ways to present that.

Here's a brief bio of Hephzibah Jenkins Townsend, the main historical character of the book. It may be helpful.

Hephzibah Jenkins Townsend’s legacy is a powerful one, even two hundred years after she lived. The missionary society she founded in 1811 was the forerunner of hundreds of societies which followed and in 1888 became Woman’s Missionary Union. If you like to read of adventure or intrigue you’ll find them all in Hephzibah’s story.

Her life began with danger for Charleston, South Carolina was a city under siege by the British when Hephzibah was born there in May 1780. Hephzibah’s mother died when she was five days old and the baby’s life was preserved by two servants who risked their own lives to save hers. Ever after, Hephzibah considered slaves as “her people” and this influenced the direction of her life. Born at the forging of a new nation, Hephzibah both influenced her times and was in turn impacted by them. She was a trailblazer, a person whose force of character was never in doubt. Beautiful, headstrong, a person of deep integrity, she never went unnoticed. No typical Southern belle, she, a fact to which her husband could ruefully attest. A distant relative, Daniel Townsend was twenty-one years her senior but loved her unreservedly, and she returned his devotion in full measure.

Hephzibah’s story is full of adventure, some of it exciting, other events downright tragic. Hephzibah married one month before her sixteenth birthday and gave birth to fifteen children, only six of whom lived to adulthood. She came to faith as a young woman, and was baptized by the eminent Richard Furman. Although a great heiress and mistress of a large plantation, Hephzibah devoted herself to looking out for “her people,” for just so had Maum Jean and Jack looked out for her. The compassionate heart of this unique woman influenced the direction of all she did.

Hephzibah caught the fire of missions zeal from her pastor and determined to organize women to support the cause of Christ around the world. In 1810 America, all a woman’s property was controlled by her husband; Daniel would not release funds for missions giving, so Hephzibah proceeded to start a baking business herself, and her dear friend and servant Bella became her business partner. They baked cakes and started an enterprise which ended up as a catering business, with Hephzibah the first ever business woman on Edisto Island.

Then in late 1813 Hephzibah met Luther Rice and missions became an even greater passion. Through her business, the mission society offerings flourished and Hephzibah Townsend was able to build a Baptist church on Edisto Island. Nearly all the membership was made up of enslaved people and Hephzibah rejoiced to see the spiritual growth in their lives. Although tragedy hit her family time and again and though she lost more than half of her children to deadly diseases, her faith never wavered.

In the latter years of her life, the church and society both flourished and in 1844 a remarkable revival broke out among the slaves of Edisto. Hephzibah had the joy of assisting her pastor in baptizing sixty new believers the day after Christmas. For a women to do such a thing would be a singular event in any time period, but especially so in nineteenth century America. Force of character and a profound sense of justice were the hallmarks of Hephzibah Jenkins Townsend’s character, making her a sterling example of faith and fortitude.

This extraordinary person was a pioneer in missions, a testimony to both unwavering commitment and sheer determination. All people of faith in our millennium can look to her and give thanks for such courage that paved the way for this generation and continues to impact our sense of God’s call.

EXTREME SPIRITUAL MAKEOVER- Imagine & Create YOUR BEST book cover ever!
US$ 299
The Mysteries of How God Works in Our Troubles
256
entries
21
designers
Create a book design that'll draw busy post-moderns with a spiritual hunger to know God more deeply
US$ 299
We publish books focused on an evangelical Christian audience....
138
entries
26
designers
Transititions Book Cover
299 US$
the product is a book entitled "Transititions" It's 100pages long. the book is about the transititions that the diffe...
90
entries
22
diseñadores
Create a Booklet for a Religious Seminar!!
299 CA$
We are a Christian based religious organization that conducts evangelistic seminars to both Christian and non christi...
39
entries
8
Designer
Create a cover for short stories on a religious historical figure
US$ 799
The Reformed Free Publishing Association (RFPA) is an independent, non-profit organization founded in 1924 for the pu...
204
entries
48
designers
The Little Dog
799 $
81
entries
32
Designer