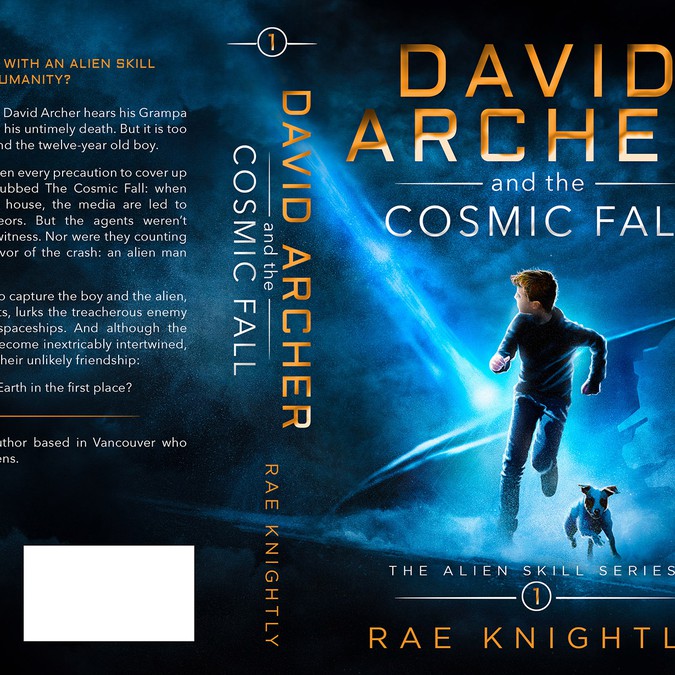 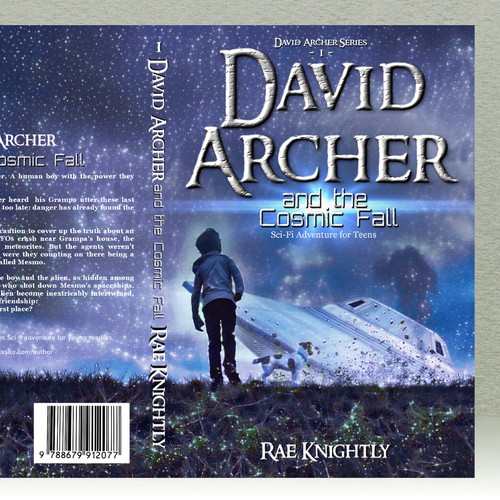 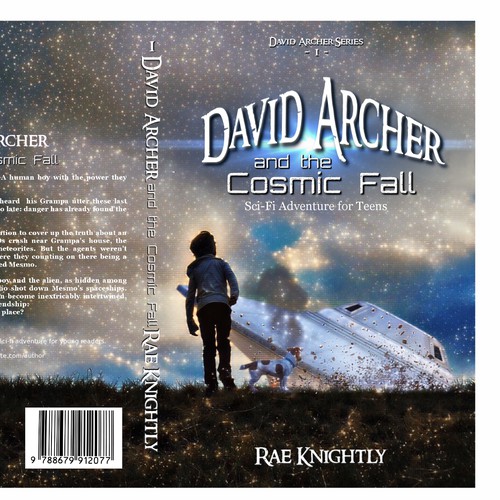 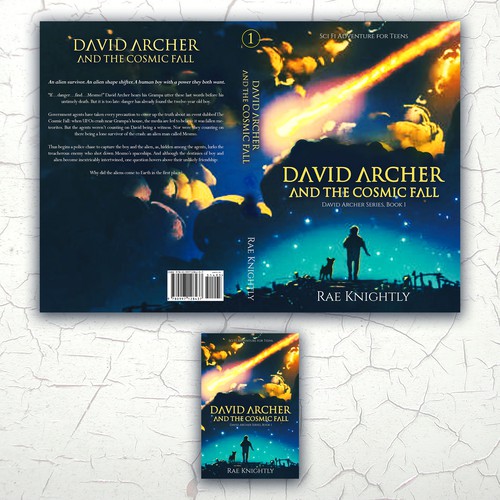 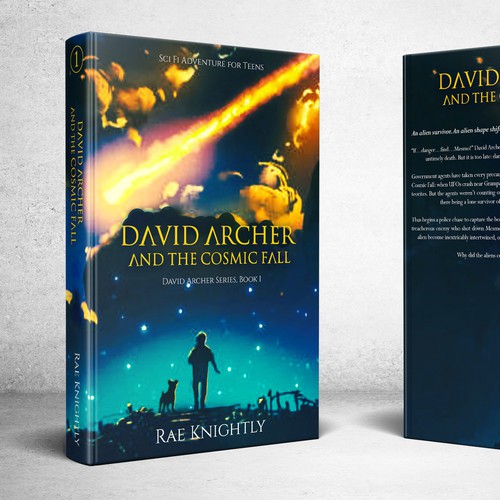 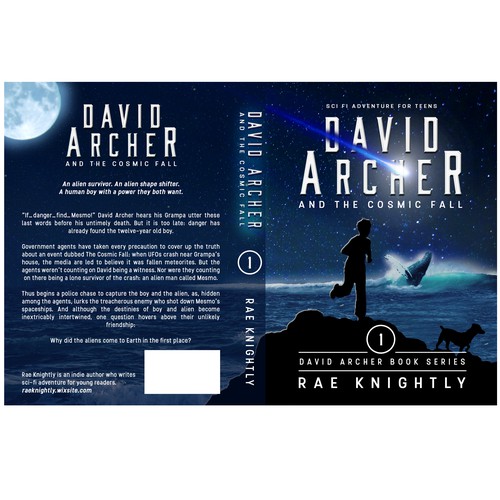 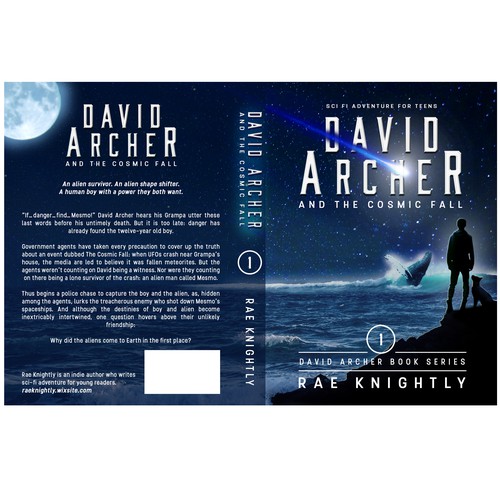 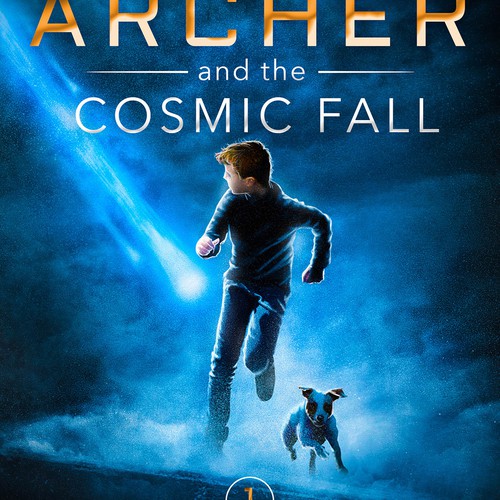 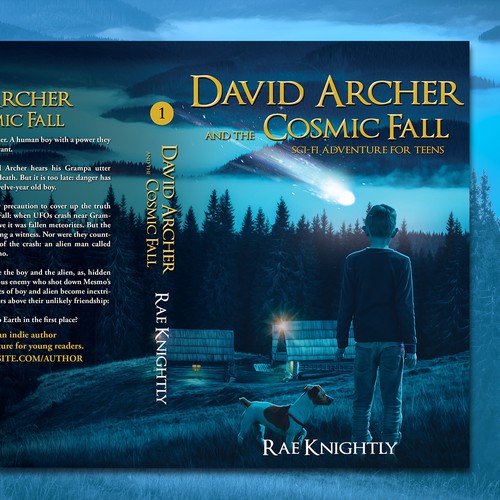 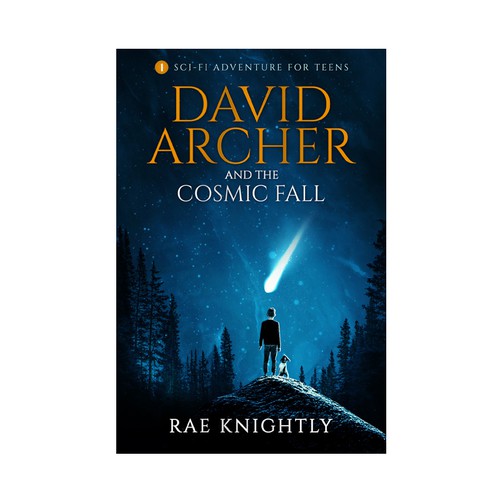 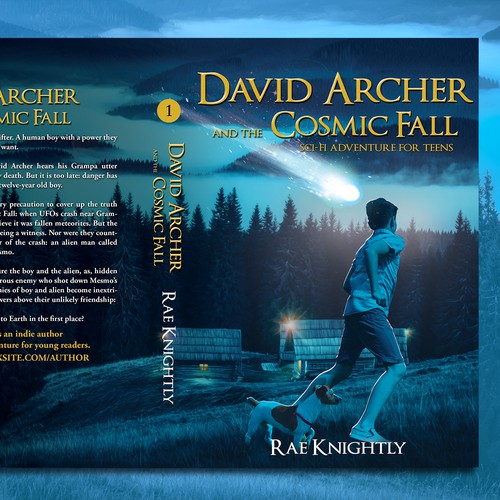 David Archer and the Cosmic Fall

Rae Knightly is an indie author who invites the young reader to go on a journey into the imagination, where science-fiction and fantasy blend into the real world. Young heroes are taken on gripping adventures full of discovery and story twists.

Rae Knightly lives in Vancouver with her family. The breathtaking landscapes of British Columbia have inspired her to write the David Archer Series.

An alien survivor. An alien shape shifter. A human boy with a power they both want.

He has a DOG, a Jack Russell Terrier, brown and white. The dog plays an important role in book 1 and 2, but NOT in book 3.

David acquieres an alien skill which allows him to communicate with animals telepathically. In book 1 the main animal at the end is a humpback WHALE (book 2 has a grizzly bear, book 3 has a bee).

The ALIEN survivor is handsome, tall, has dark, honey-coloured eyes, high cheekbones, a square chin and a straight nose, olive-tanned face and white hair. When he crashes to Earth he is wearing a black outfit made of one piece. Then to blend in with humans he wears jeans, brown jacket and a fur hat with ear flaps to hide his white hair. He can manipulate WATER.

The alien ENEMY is tall, has spikey, white hair and honey-coloured eyes. He can shape-shift to take on the form of other human beings. He changes into a handsome police officer with a bald head and green eyes who wears a neat suit and tie (think Men In Black).

Please check out my previous book cover attached, which had a different title and pen name ("The Chilliwack Fall" by A.J. Block). Although I loved this book cover, readers were confused because they thought the book was about a humpback whale. But it is mainly about a boy and an alien who become friends as they flee from the alien enemy and government agents.

In this previous book cover, the element of a FALLING STAR in the background could be used in all 3 books. This is a good depiction of the alien voyager falling from the sky. This falling light could be used in book 2 (sun shining behind a mountain) and 3 (the alien departs) to show the sci-fi/space element of the story.

Lastly, the family-friendly ROMANCE is between the alien voyager and David's mother: ash blonde hair, shoulder-length, green eyes. But this is a book for children/teens and romance is not the main theme.

Comienza ahora
We need a powerful book cover for a Science-Fiction novel
€359
The target audience is between 25-45 years old, speaks French (France, Canada, Belgium, Switzerland), who likes Sc-Fi
67
entries
12
デザイナー数
Book cover for non-fiction
199 US$
162
entries
14
diseñadores
Book cover for non-fiction
$ 199
156
entries
13
Designer
paper back and ebook cover
£ 319
Someone is reading this book to learn the most effective way to write a to-do list that will keep them motivated and pro
51
entries
20
designers
The Garden of Shadows and Bones
$10,099
My books are geared towards New Adult. They are mainly about dark fantasy with witches and magic.
62
entries
24
diseñadores
Finance BOOK COVER needed. Prefer clean, light simplicity and a drawn illustration.
US$ 499
Self-employed professionals, typically men ages 30-50 who make over 75k per year single or 100k joint, maybe they work f
35
entries
12
diseñadores
Más información sobre diseño de portada de libro o revista
Vea como funciona