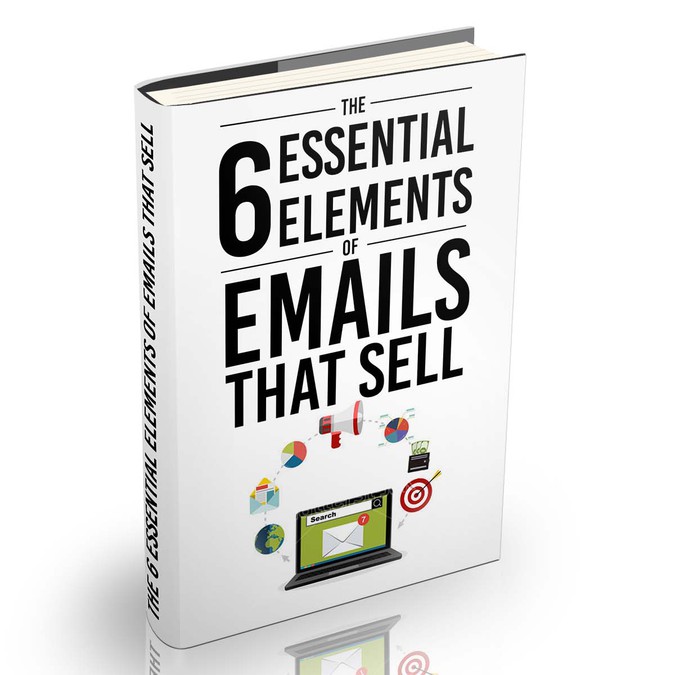 Design a Simple, Eye-Catching Cover for eBook on Email Marketing 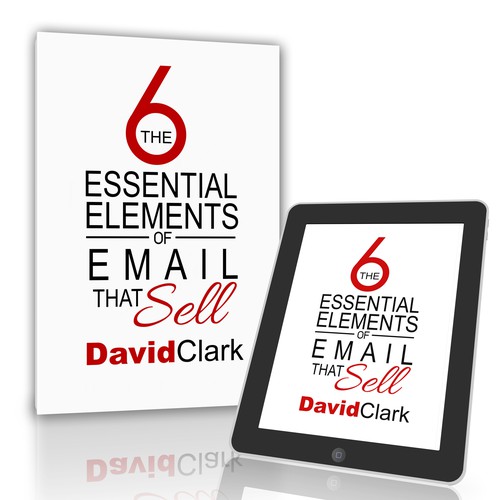 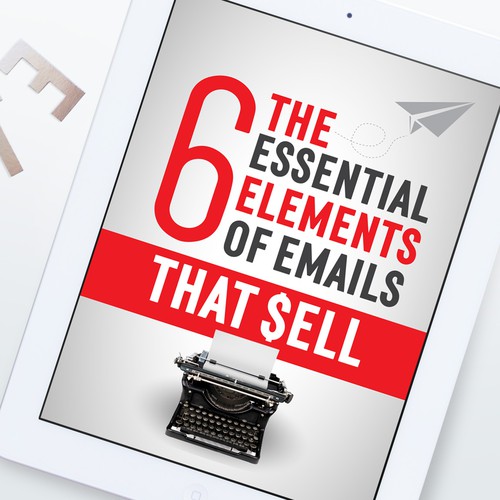 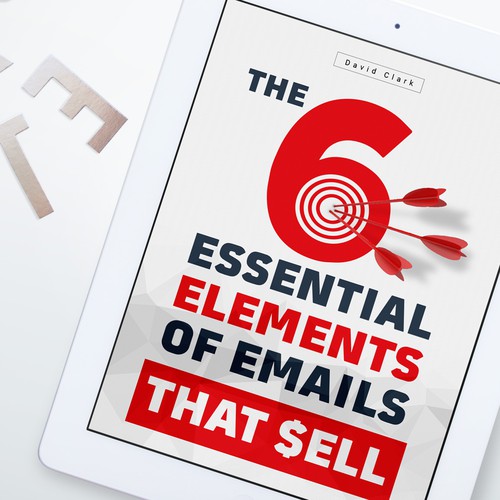 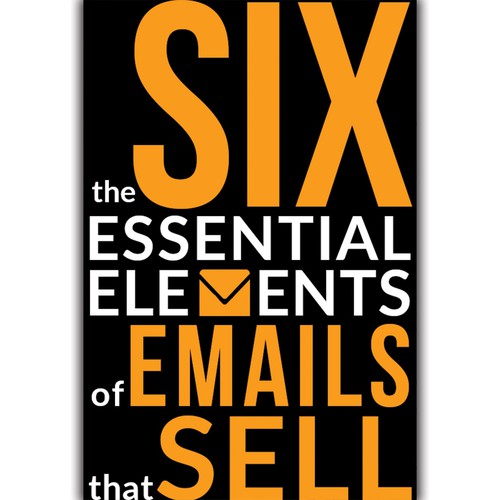 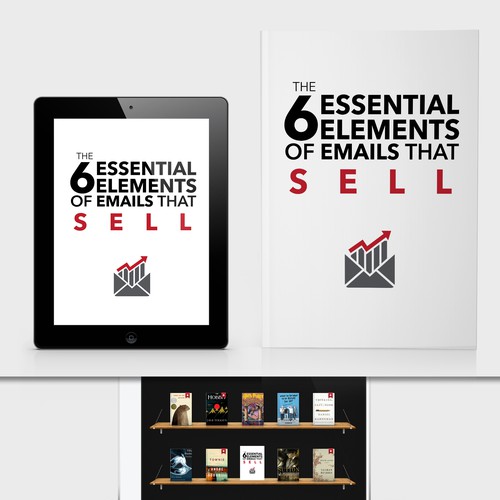 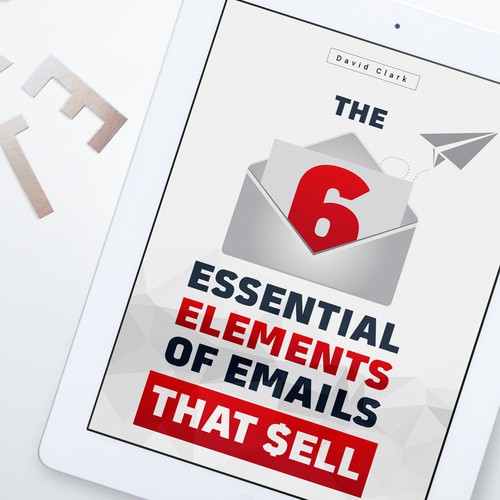 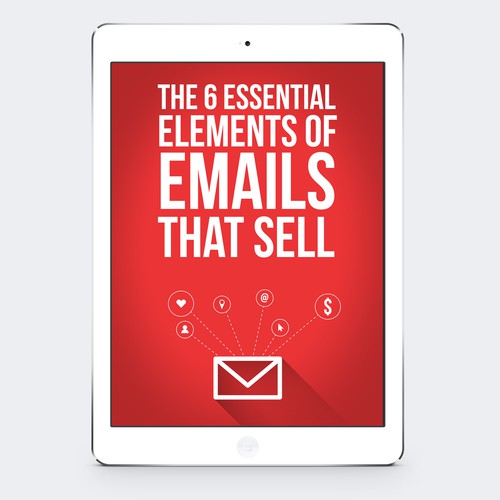 The 6 Essential Elements of Emails That Sell

An image of the author will not be necessary and the focus of this book (and the cover) should be aimed entirely at the reader.

This is a brief, content-packed 30-page ebook designed to give readers who are new to email marketing a quick primer on some of the most important aspects of writing emails that make money for their business.

Anyone who wishes to write emails that sell needs to be familiar with these 6 elements.

The "target reader" for this book is named James. James is 33 years old, a white male with light, thinning hair and a slim build with 10 extra pounds on him that he's self-conscious about. He’s married to his wife Rebecca who he adores, and they have a 1-year old daughter, Skye, who is the absolute love of his life. James and his family live in Phoenix, AZ in the middle-class suburb of Gilbert.

James hates the summertime heat of Phoenix, and often daydreams of a life somewhere else. Some place with beaches, maybe. California is the dream, some place with nice weather where he can play outside with his wife and his daughter. But James doesn’t have the money right now. He wants it though, and he thinks about it a lot.

James works in an office, and he doesn’t like his job. His coworkers are nice enough and his boss is even decent, but he knows this isn’t what life is about. He does it purely to pay the bills, and he feels stuck. James wishes he could go back in time and make different choices, different decisions that might lead to a better outcome for him and his family. James really just wants to make his wife proud and feel loved and respected, and he wants the best for his daughter. He wants to show his friends, family, coworkers, and acquaintances that he can succeed, and that he’s destined for more in life. He spends time every day fantasizing about starting his own business that might bring him success, but he doesn’t know where to start.

James has even tried starting his own business before but it didn’t work, and he was left feeling jealous, envious and back at square one.

However, he's recently heard of email marketing and looking further into it, he's excited at the prospect that it might work for him and help him build a business that would allow him to achieve what he truly wants.

His challenges include not knowing exactly what to do, having information overload, having a lot of skepticism around online marketing, and also thinking that it's probably a lot of work that’s "over his head".

He is afraid of failure. Of rejection. Of letting his wife and daughter down.

His main objections to trying something new are lack of trust, the fact that in the back of his mind a part of him believes he doesn’t believe he can do it and he doesn’t want to be made a fool of or be embarrassed in front of his family.

James’ biggest surface desire is to make a bunch of money. What he really wants is love, appreciation, respect, and a new life, a better life for his family. To feel like he’s a great man for his wife and daughter.

This book will be a "lead magnet" (an opt-in bribe) to those who opt into our newsletter at emailmarketingthatsells.com

The letters and wording are the most important part of the book cover. An easy to read sans-serif font should work great (i.e. tahoma, arial, helvetica, etc). Any images or illustrations should not be the most prominent part of the cover. The cover should look somewhat professional without being too bland or boring.

Comienza ahora
**Blind Contest** Design a modern retro book cover with potential for follow-up paid projects in the book series
US$ 299
The target audience is young mothers, mostly millennials and generation x, who want to save time and money by using natu
185
entries
18
designers
Design a stand-out Book cover for 'Remember Who You Are'
AU$ 399
Remember Who You Are is for those who have been getting this niggling feeling that there is more to life. It's for those
96
entries
22
Designer
Building dollars, brick by brick. Show your best artistic trick! Let’s see how-to cover artwork.
US$ 399
Fledgling investors or those interested in alternative retirement investing in contrast to the stock market or those see
117
entries
39
designers
Create a award winning book cover
USD 399
Men between the age of 25 to 40
120
entries
32
designers
She's A Sheriff in Nevada Book Two
US$199
Women, Nevadans, westerners, crimes solvers, romance readers.
47
entries
8
designers
Family Stories of Bill and Jane Harris
$299
Only my family
24
entries
9
designers
Más información sobre diseño de portada de libro o revista
Vea como funciona