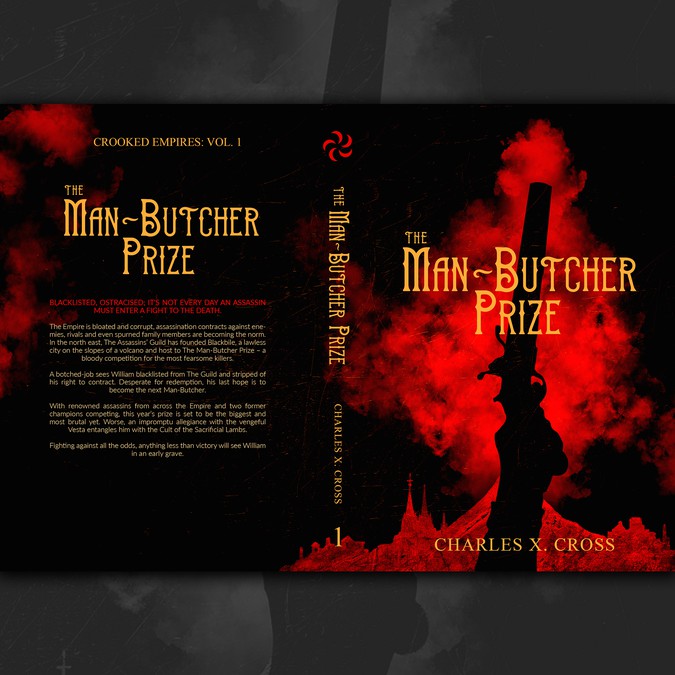 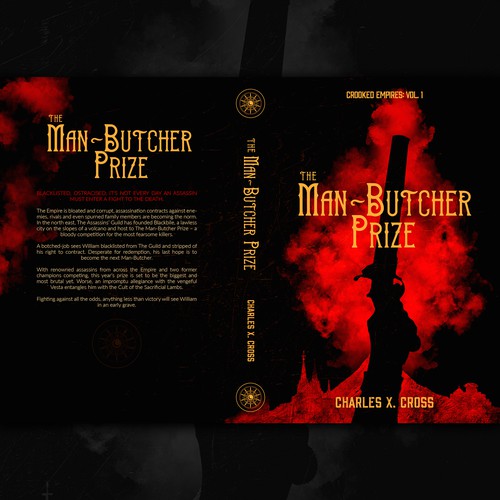 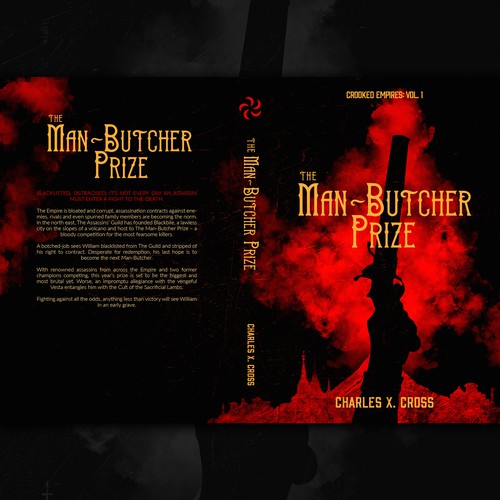 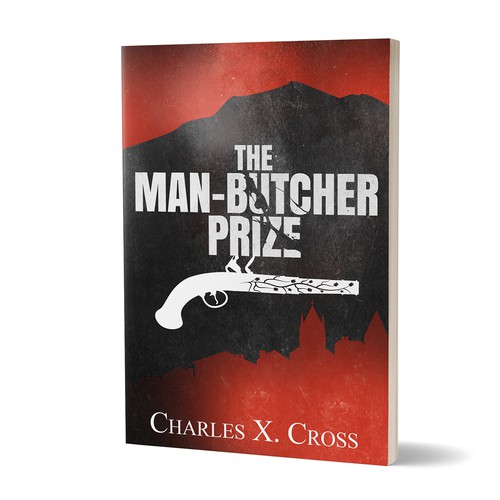 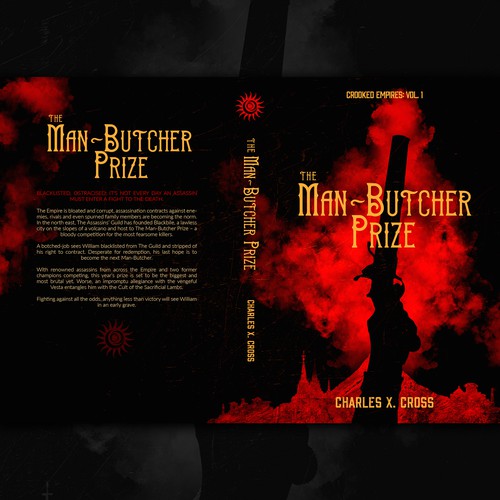 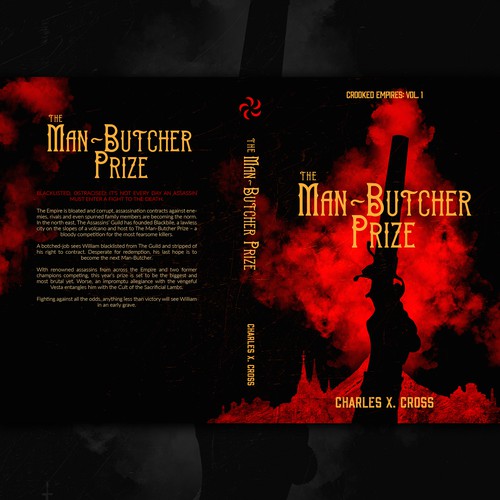 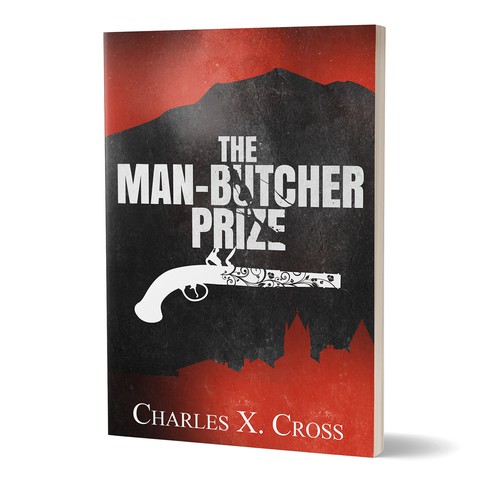 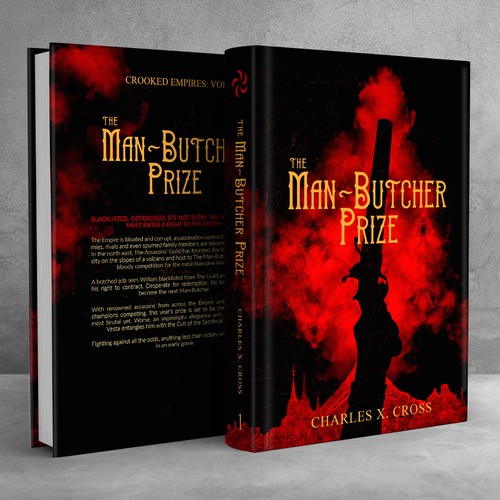 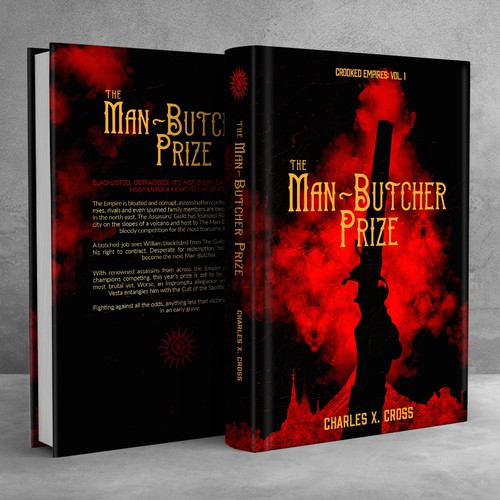 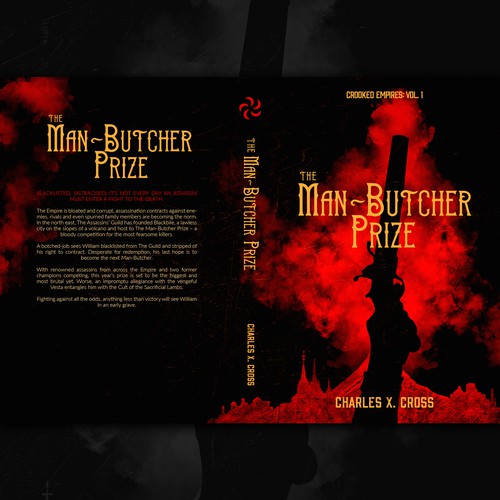 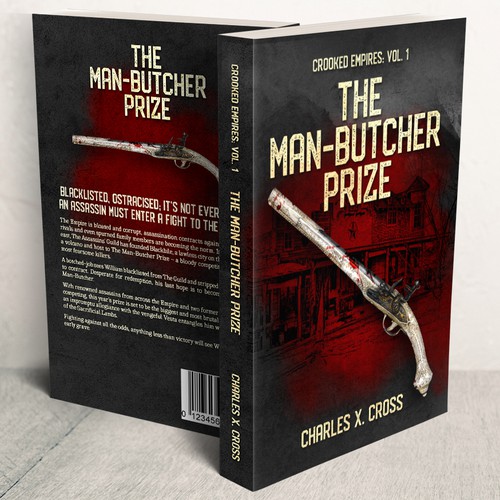 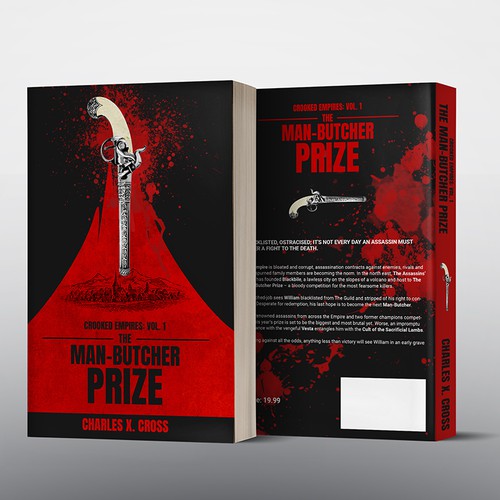 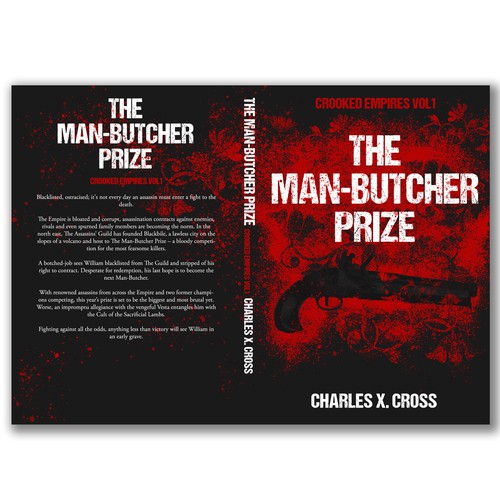 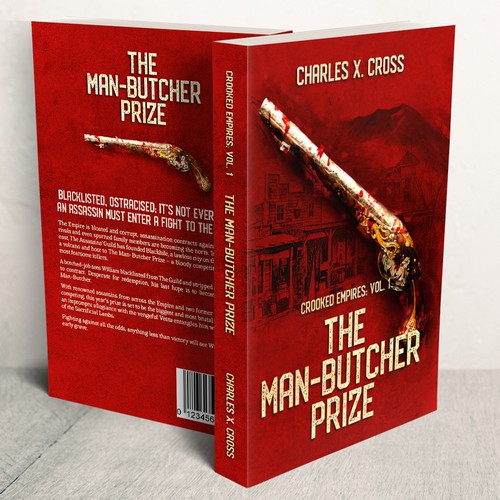 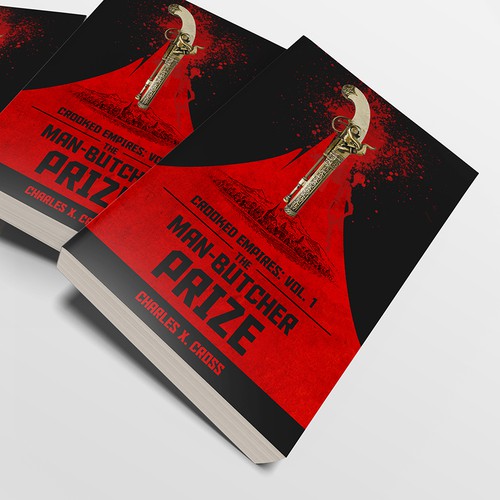 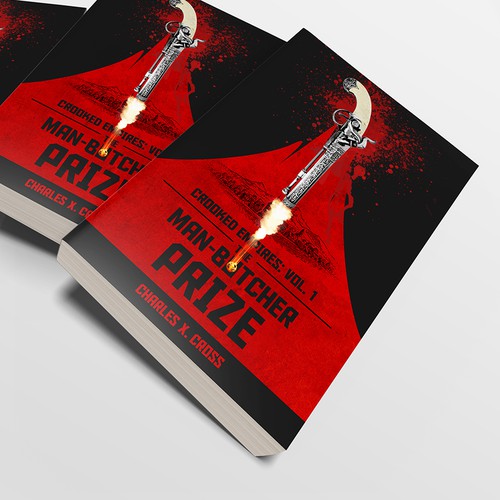 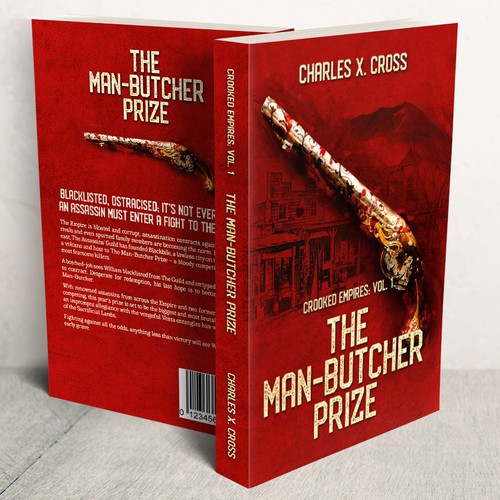 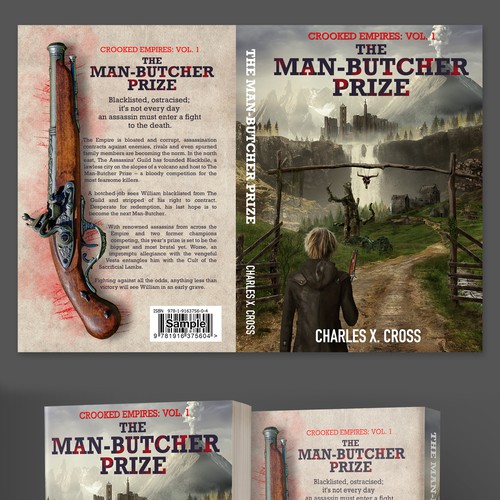 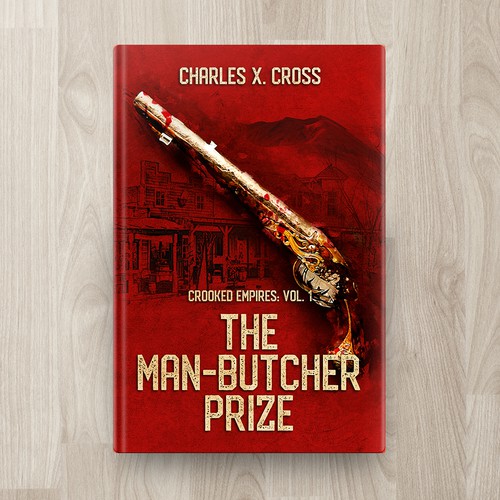 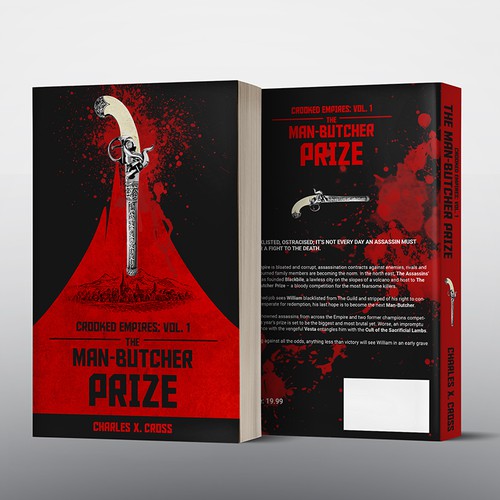 While this is not my first ever book, it is the first I have ever felt confident enough to self publish. I am hoping to make this venture my career with a little luck and would like to form a strong working relationship with an artist/designer for all books in this trilogy. I enjoy reading/writing (obviously), video games, cooking and have an unhealthy relationship with Youtube. As a cynical Yorkshireman I tend to find humour in the darker parts of life.

William, a hitman with his professional reputation in tatters, is determined to be crowned champion of the absurdly commercialised Man-Butcher Prize – a fight between assassins for honour and redemption. Pitted against a colourful array of mad-cap assassins, including a necromantic doctor, a callous hit-woman, two former champions, and his estranged mentor, William’s chances are slim. Side by side with the fiery Vesta, they might just make it!

The Man-Butcher Prize is a dark fantasy with a hint of sour humour. The setting is equivalent to Europe 1700-1800. Many of the characters are UK/ European inspired but there are other from further afield in places akin to Africa, China, Russia, etc.

In the book the Man-Butcher Prize is a competition between assassins to determine who is the greatest amongst them. Many enter for glory, William has entered for redemption. Organised by The Assassin's Guild, outside of imperial influence, the all out brawl takes place across an entire guild owned city. Morbid tourists come from all around to witness the carnage and to petition the winner to kill their enemies.

The target audience for my book is anyone 16+
I feel that the potential fan base might skew slightly male, as the main character is a man (William).

This is just one of the many ways a designer might wish to take my cover.
Good example of a volcano that might have the city of Blackbile on its slopes. This could be depicted as a digital painting or perhaps like the hobbit cover shown here.
This a good example of the flintlock handle shape should you choose to include this in your design. Williams is primarily silver with a little less thickness to the barrel. There is an ivory inlay on the handle and wild flowers etched along the barrel. If yoiu are doing a highly detailed image, it is worth noting that it is also "breach loading" which means it breaks open like a double barreled shotgun.
An example of a particularly impressive cover. Not just anybody can replicate this. I would like for my cover to have an artistic style to it. Something that sets it apart from most other self published books.
Another impressive cover. As you can see it is very different to the previous cover. I would like each designer to bring their expertise to the fore. I would much prefer a wide array of styles than lots of iterations on the same ideas.

I am open to many different styles.

I have ideas about a cover showing William's pistol, which is a breach loading silver flintlock with ivory inlay in the handle and wild flowers etched along the barrel's edge.

I also had a thought that the town of Blackbile could be depicted on the cover in more of a painted or silhouette style. The town is on the slopes of a volcano at the edge of a mountain range and there is a river running through it. The town itself looks like an American frontier town with wooden buildings, muddy roads, and wooden boadwalks. Other important landmarks include a brick-built town hall with a dome on the roof and a black chapel with tall spire and upturned cross. There is also a square bell tower with spiky fortifications on the outside.

Just as another detail, it often "snows" ash in the town. Guns fire bullets in paper catridges. Blood splatters could be good.

The assassin's guild logo is intertwining cresent moons that form a sun, this may be good on the spine.

Though I am adverse to characters' faces on the cover, there could be part of a person or someone facing away. William wears black and brown linens, has blonde hair and is caucasion, average height.

I am open to both a traditional painted/illustrated looking style or a stylised pop-art minimalist look. (I am not really up on all the terms but I hope you get the idea.)

Please feel free to come up with your own ideas and don't feel you have to stick rigidly to my ideas.

The city of Blackbile is on the slopes of a volcano. It is a typical american style frontier town (think cowboys) but with more eurocentric landmarks. There are wooden buildings with wooden facades, muddy roads for horses carts and carriages. There is a wooden boardwalk for people to walk on to keep out of the mud. It often "snows" ash in the city, so most places are dirty and grey.
The notable landmarks of the city are the town hall withis a large brick built building with a dome on the roof. A large chapel/ cathedral with upturned cross at the to of the spire and another building that is a square bell tower. A river runs through the city called "The Landslide" it is choked with dirt and rocks and ash and looks like flowing earth.

William is slim, average height. Short blonde hair. generally wears brown and black linens, basic shirt and trousers. Has a red scar on his inner forearm that looks like a red smear (left). Weilds a silver flintlock. He also has the assassins guld logo branded on his arm. (intertwined crescent moons that make a sun.

I don't particularly like book covers that feature photography if that photgraphy is obvious/unfiltered. I'm not a fan of book covers featuring characters face-on or full body images of them standing there.

YA Romance cover
199 $
Teen to adult
104
entries
27
Designer
Children’s book illustrated by a four year old to help kids deal with coronavirus isolation
A$ 269
Parents and Grandparents of young children 2-8years impacted by the coronavirus. Teachers. Librarians. Child care worker
90
entries
11
designer
Dark & cold Post-Apocalypse book cover for upcoming book: The Frigid Pass.
529 CA$
Preppers / Survivalist mostly adult men in north American
82
entries
33
diseñadores
'No Bullies Allowed' treefort with red-headed girl in the treefort.
399 $US
People who have been bullied or are currently being bullied. People who live with or have to interact with Narcissists
43
entries
7
designer graphistes
Book Cover Design EBOOK and Paperback
319 £GB
Someone is reading this book because he wants to explore the vast universe of investment possibilities that the real est
91
entries
18
designer graphistes
Book Cover for Historical Adventure/Romance Novel
199 $US
People who like Phantom of the Opera, historical fiction and historical romance.
63
entries
7
designer graphistes

Comienza ahora
I need an eye-catching book cover that grabs your attention right away.
USD 499
murder mystery readers, true crime readers, police procedure readers, suspense readers, thriller readers, police enthusi
190
entries
18
diseñadores
Business book cover needed, themed around phenix and unicorn.
US$499
Young passionate enterpreneurs both male and female, aged between 18 - 40. Keen to build their own businesses. Target ge
161
entries
42
diseñadores
Book cover
239 GBP
Young mums / parents / to be discussed after coffee mornings
8
entries
4
diseñadores
The Death of Neo-Darwinism
US$199
This is a hot topic and would be of interest to anyone in the academic community regardless of the discipline.
26
entries
11
diseñadores
Creative Book Cover for a Female Dating and Relationships Title
US$199
Women reading this book are usually younger and they’ve just been through a breakup. They don’t know how to collect the
150
entries
24
diseñadores
Minnesota Cabin scene to appeal to women who like love stories
399 $
Female, USA, 18-50
142
entries
27
Designer
Más información sobre diseño de portada de libro o revista
Vea como funciona