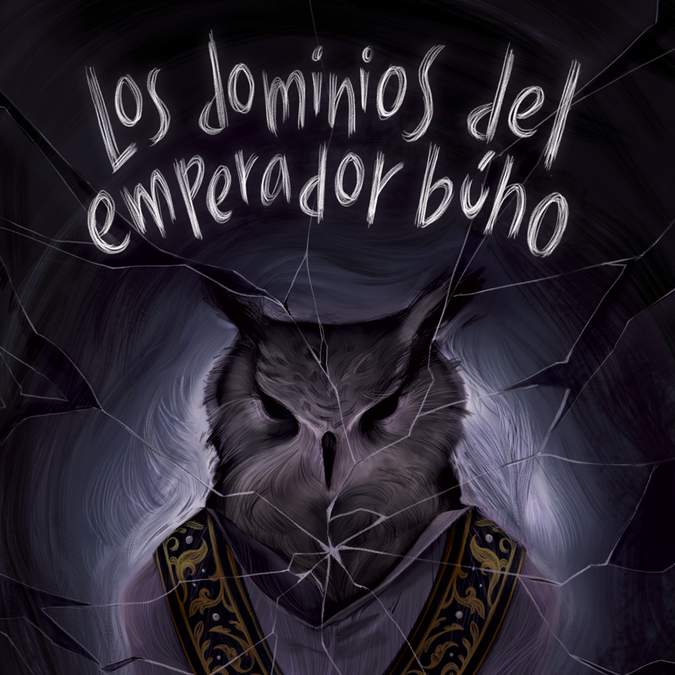 Draw the cover for a collection of novellas involving mental illness 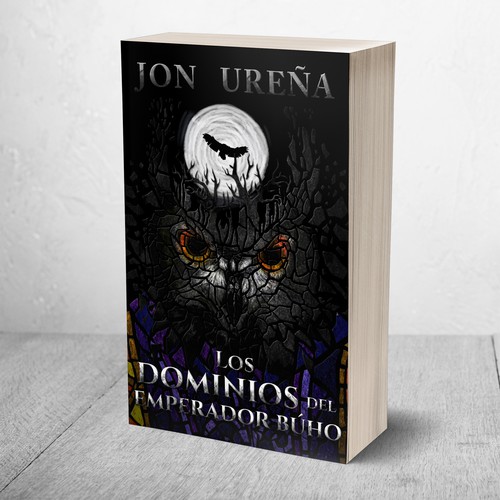 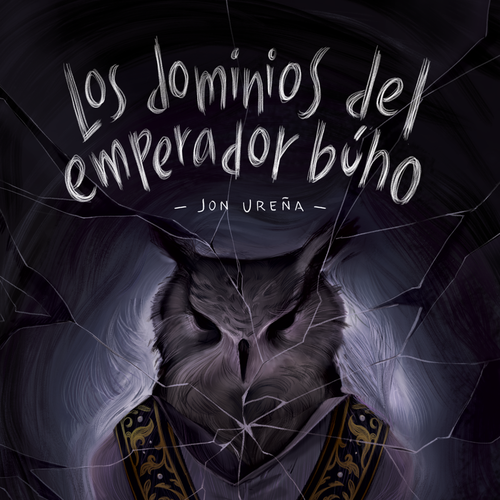 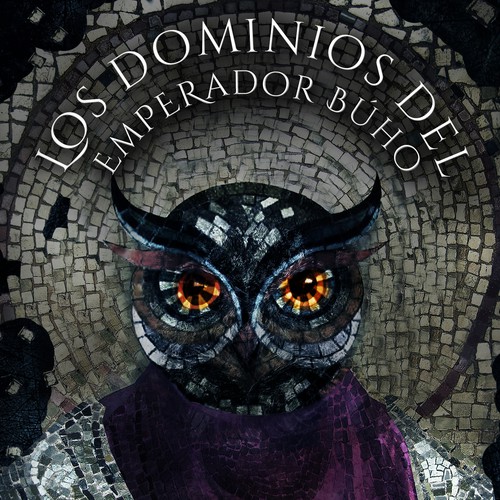 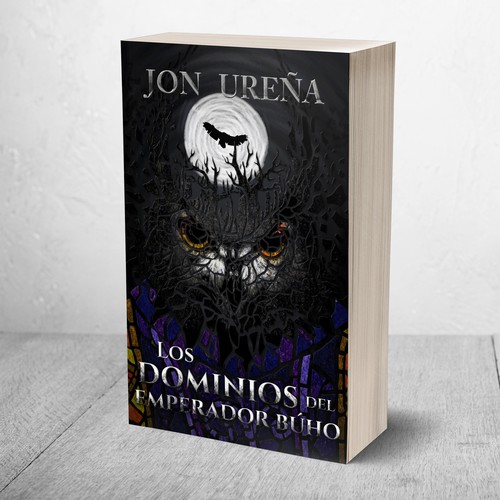 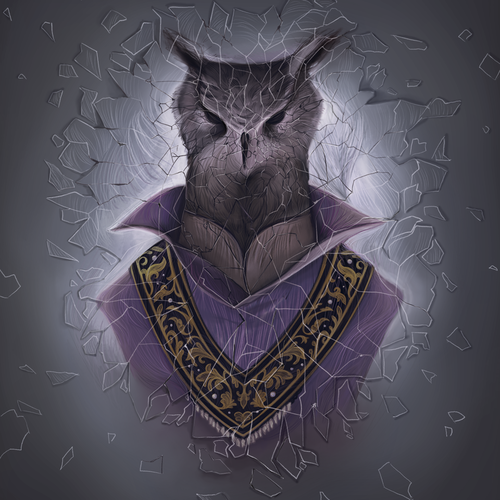 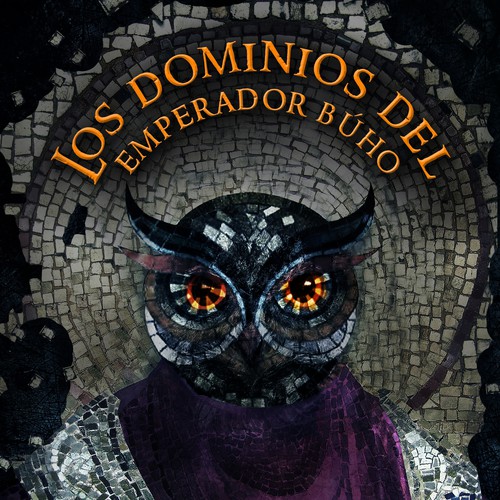 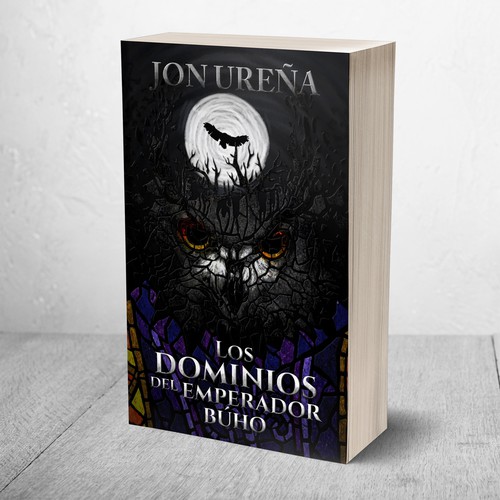 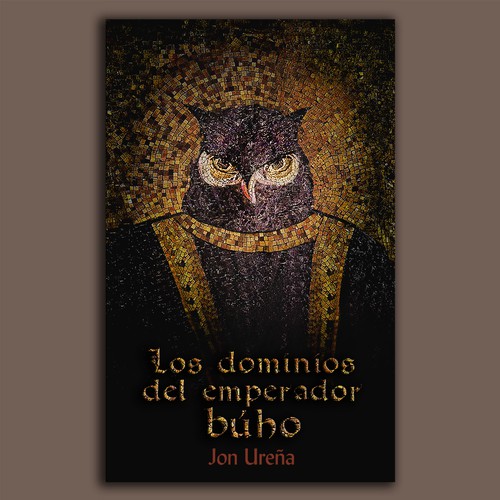 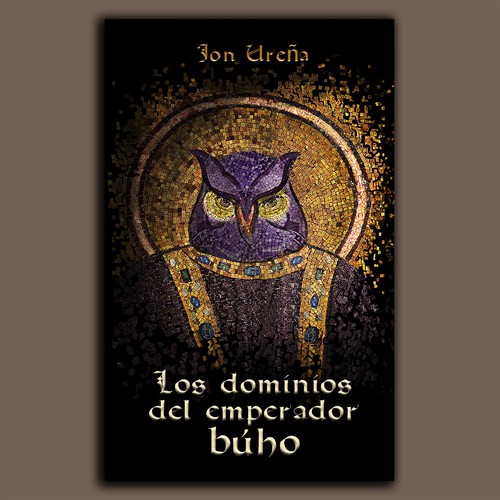 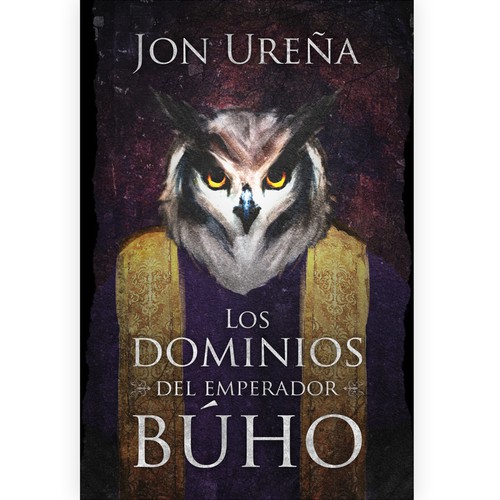 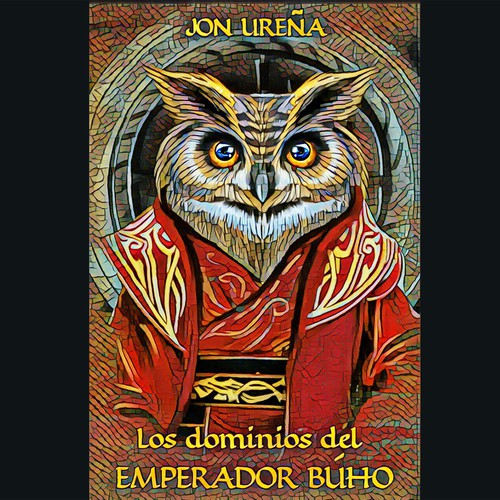 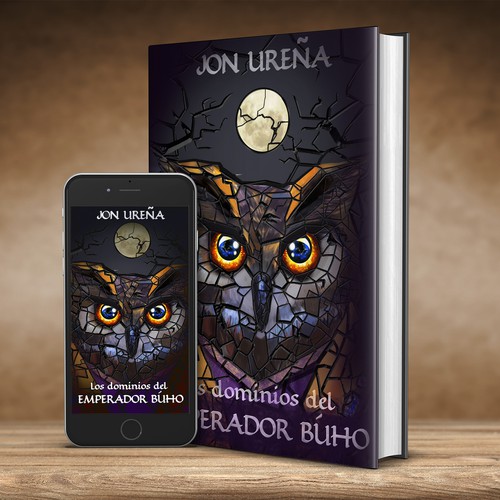 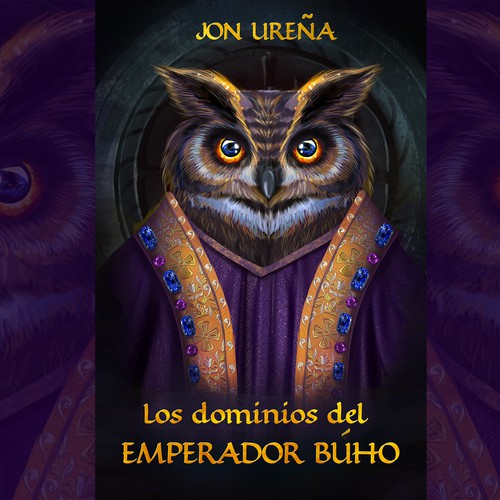 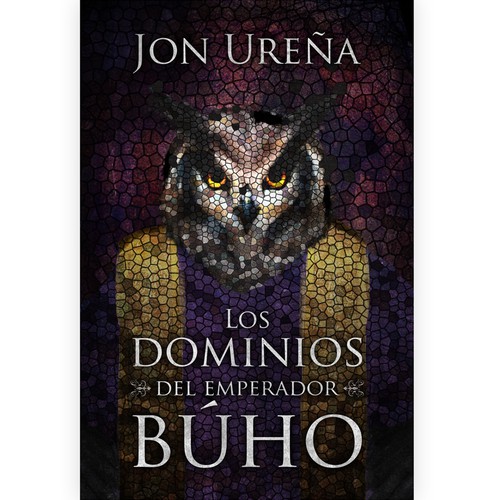 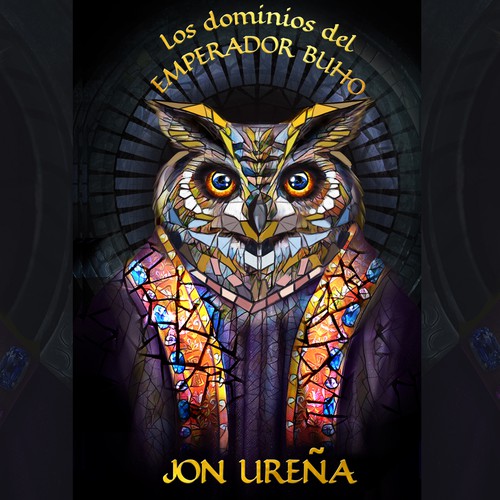 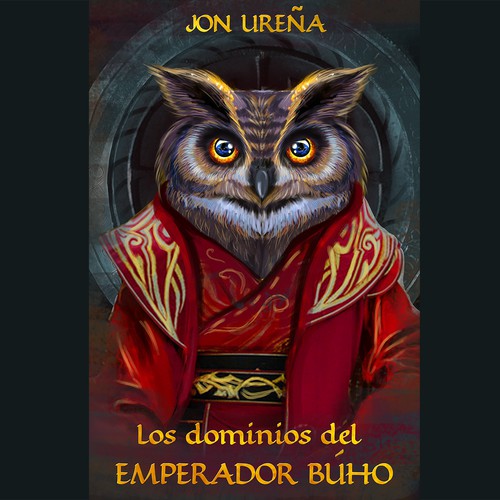 A collection of three novellas roughly classified as psychological horror, but with sci-fi and fantasy elements, and involving characters slowly descending into madness.

Adults who are into horror, or in general dark fiction.

I need a cover for a fiction book that I will sell on digital platforms, so the standard for a Kindle cover would apply. I had a specific image in mind: a frontal view of a royal owl that is dressed in a specific way described below, but the style should also mimic how certain personalities used to be represented in the Byzantine Empire, following photos like the ones I'll link later.

The cover would reference one of the novellas the book contains. It's called "The emperor owl". The protagonist, a teenager, has been isolated for years in the woods with a couple she believes to be her parents, and who abuse her. She is a creative individual who yearns to escape her situation, but after years of tolerating it her mental state is precarious. During one of her walks through the woods to draw, she meets a "person", actually an intelligent and initially invisible interdimensional entity, and the protagonist manages to befriend it/him. After some terrible events, the protagonist slides into a psychosis during which she believes she has connected the dots, and that her invisible friend is an owl that uses to look at her through her bedroom window. She hallucinates that she flies after him until they land on a galley the owl happens to own. Turns out, in her hallucination, that the owl is the emperor of a distant land inhabited by intelligent birds. The emperor owl allows her to accompany him, and in the fantasy land she is treated like someone of value. Then the second half of the story happens.

This description, translated from Spanish (so it might be a bit off), made about the clothes the owl wears is relevant, given that they should be present in the drawing: "[They] slid through the head and stretched wings of the owl a purple dalmatic. Around his shoulders and torso they wrapped a sash embroidered with filigrees of gold and silver. In its fringes sparkled dozens of gems."

The owl should be a royal owl: https://en.wikipedia.org/wiki/Eurasian_eagle-owl . Obviously there are plenty of reference images on Google that would help.

For the style, which complicates matters, I had imagined something like the following, including the idea that it should be displayed as a mosaic:
http://skepticism-images.s3-website…nian-I.jpg
http://4.bp.blogspot.com/-Tu_Ui2DOd…600/mosaic
https://c8.alamy.com/comp/BBP1PN/em…BBP1PN.jpg

I had imagined the image taking front and center of the cover and being generally round, although maybe the mosaic pieces are a bit loose around the edges.

The tone is important. Although that story could generally be classified as a fantasy, it's very dark, so the drawing should give some sense of darkness and menace. Beyond that drawing, I can't think of anything better for the rest of the cover than filling it with a very dark color, maybe even black, a sort of implicit signal for the general darkness of the collection. If you have a better idea, go ahead.

The only texts the cover should contain are the title, "Los dominios del emperador búho" (notice that in Spanish only the first letter is capitalized), and the author's name, Jon Ureña (notice the ñ). I don't care where they are placed as long as it looks good.

The image should look drawn. Whether or not you actually draw it is another matter.

NOTICE: I emphasize that the central image, the owl itself/himself, should incorporate a mosaic style. To define it better, I had thought of irregular pieces forming the image somehow, and to drive home implicitly the common thread in the three novellas of the protagonists losing their minds to a significant degree, it would be nice if towards the edges of the mosaic, the pieces get progressively looser, maybe to the extent of some of them appearing to be falling apart. I don't know if I'm screwing some of you working on your design at the moment, but maybe it works better as you had envisioned it.

SECOND NOTICE: I think that I'm not getting across very well regarding the mosaic issue. I'm looking for something similar to this:

It would be a mosaic of irregular pieces depicting the owl described above and pictured following the description (meaning with the clothes mentioned, etc.). The mosaic would take front and center of the cover and ONLY depict the owl, leaving the rest of the cover for something else. I imagined the mosaic having a roundish shape, with pieces getting loose the furthest apart from the center, to depict the mental disintegration. I don't think this is something that can be done digitally unless you are really good at it, so it would have to be drawn somehow. The pieces would have to be as small or big as necessary to create a defined image of the owl and with strong features.

What is your idea of a powerful ebook cover for this book?
SGD 279
Women and men, but mainly women age 28 to 58, single or in a relationship. No specific location.
99
entries
19
diseñadores
Modern art nouveau-style fantasy cover for printed book. Ebook cover project to follow.
319 £
Primarily for adults, but younger readers would enjoy it too. A general audience that likes epic fantasy with psychologi
8
entries
2
Designer
Business book cover needed, themed around phenix and unicorn.
USD 499
Young passionate enterpreneurs both male and female, aged between 18 - 40. Keen to build their own businesses. Target ge
161
entries
42
designer
paper back and ebook cover
£ 319
Someone is reading this book to understand how to get the best loan offer by boosting his three-digit credit score. He m
43
entries
8
designers
Design first-ever Eco Bible book cover
$ 500
We intend this book to be bought and read by Christian readers as well as Jewish and secular ones. Most readers of the b
223
entries
32
Designer
eBook cover for a crime story
EUR 179
Any person who likes crime stories like The Godfather, The Departed, Breaking Bad, etc.
94
entries
20
Designer