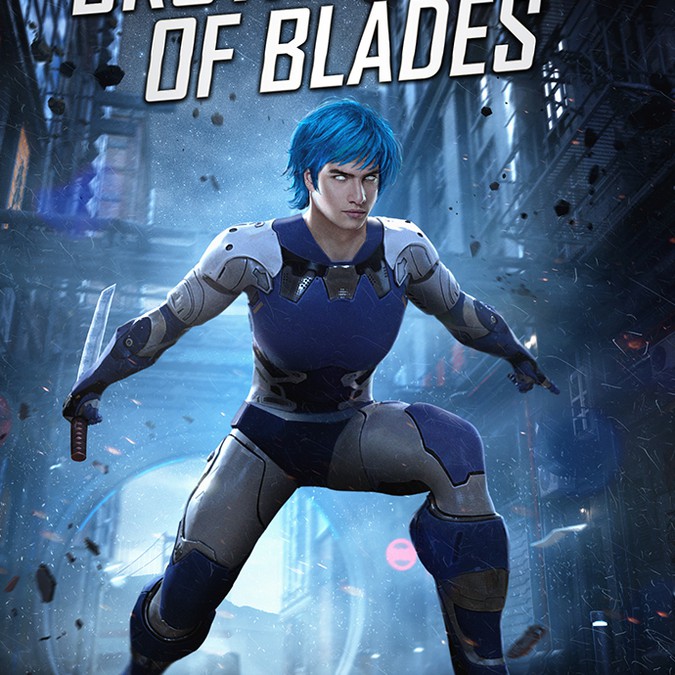 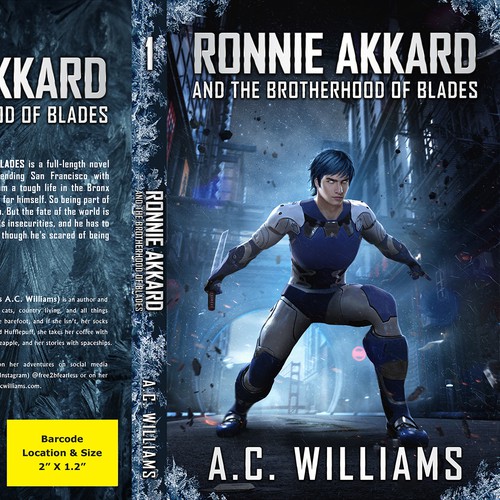 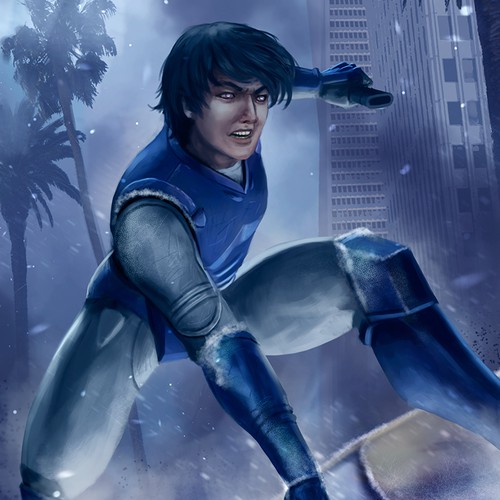 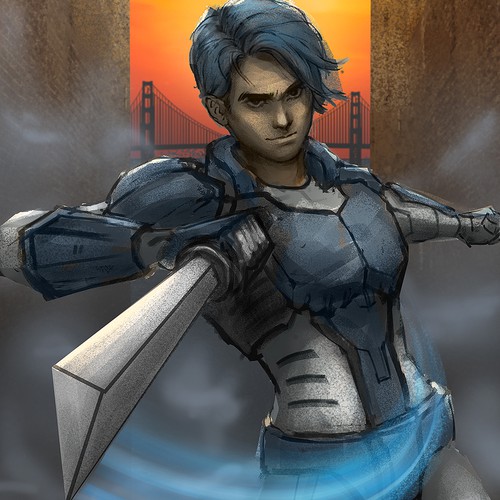 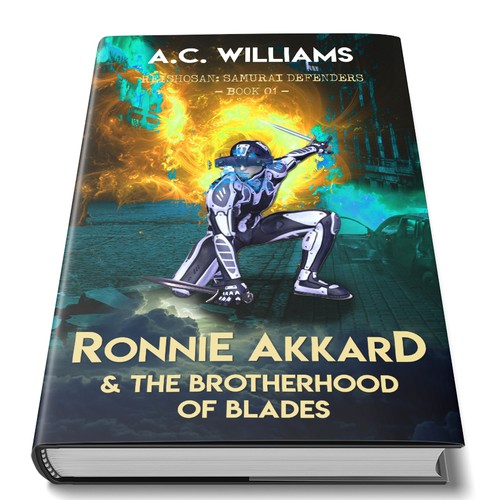 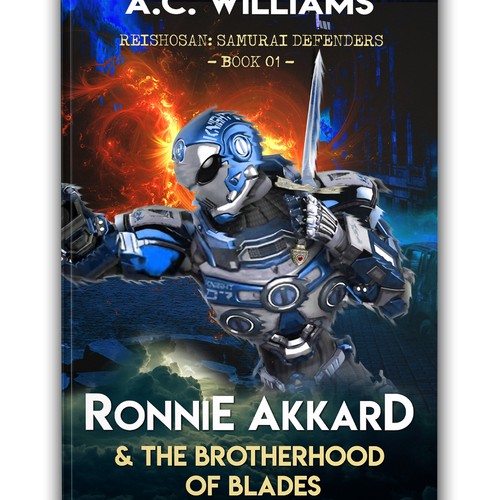 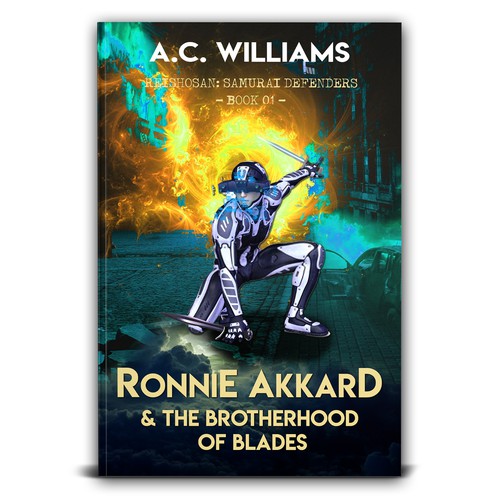 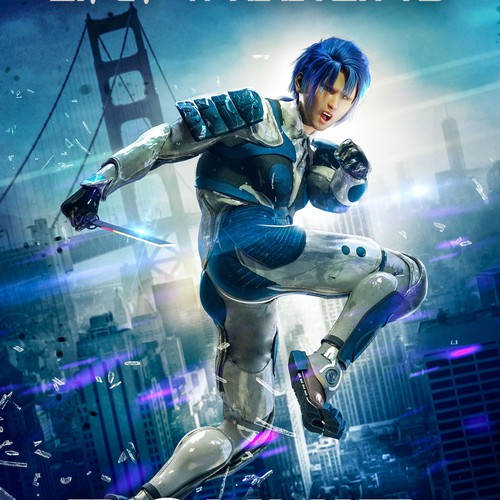 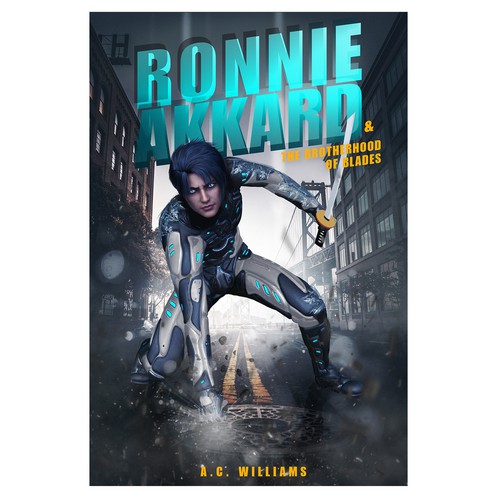 Ronnie Akkard & The Brotherhood of Blades

Amy (also known as A.C. Williams) is an author and entrepreneur who loves cats, country living, and all things Japanese. She’d rather be barefoot, and if she isn’t, her socks will never match. A proud Hufflepuff, she takes her coffee with cream, her pizza with pineapple, and her stories with spaceships.

RONNIE AKKARD & THE BROTHERHOOD OF BLADES is a full-length novel about a team of samurai superheroes defending San Francisco with high-tech elemental armors. Ronnie came from a tough life in the Bronx where he grew up alone on the streets, fending for himself. So being part of a team is something he doesn't know how to do. But the fate of the world is at stake, so he has to put aside his past and his insecurities, and he has to protect the other members of his team, even though he's scared of being abandoned once the fight is over.

This story and the other books in this series are written for "old millennials." The generation of kids who grew up with Saturday morning cartoons and superhero stories. It has a similar vibe and feel to the Marvel Cinematic Universe or to shows like Voltron, stories that are appropriate for a young adult audience but that appeal to an adult viewership because of the depth of the characters and the worldbuilding.

The main age group is 25 to 45, both male and female. People who love anime and video games, superhero adventure stories, and story elements of found family. The female characters are strong willed yet still feminine; the male characters are not all macho. And every aspect of the story, even the dark ones, resolve with a message of hope.

I'm really looking for a designer who would be willing to help me long-term for this series. It's large, expansive, and I have it planned out and organized so that I can guarantee it will continue. There are many books to come in this series, and I want to work with the same designer for all the covers if possible. The goal is to put out 2-3 books in this series every year.

I envision this cover to be in a realistic style with a lot of action happening. I would like the see the main character in an action pose (like from a scene within the book) on the front cover with some indication of where he's located (San Francisco)--like the Golden Gate Bridge in the distance or something. The character also will be wearing the first layer of his elemental samurai armor, which I can provide examples of. I have an illustration of the character I commissioned which I can provide as well. The main character, Ronnie Akkard, has blue hair and silver eyes, and I would like to have both of these features obvious. I will include images of comp titles that I feel are similar in mood and tone. Since the book is mainly action/adventure, I would really like to see the character in an action pose or in some representation that he's moving or fighting.

It's a modern-day story. A superhero story set in 2010 San Francisco. It's a team of samurai superheroes who are learning how to use their elemental armors without an instruction manual AND learning how to be a team when none of them have ever been good at teamwork. There's a lot of action, a lot of humor, and VERY strong characters. The story was inspired by the old anime Samurai Troopers (dubbed in English, Ronin Warriors).

Even though the story itself has a bit of a fantasy vibe, I would like the fonts to be SANS SERIF since it also has a lot of techie/sci-fi feel to it as well.

Some of the best examples of mood and style I think are the images from the Final Fantasy movies--the Japanese feel but the detail and realistic presentation.

Another element I would like to feature somehow is that the main character's armor is an ice armor. So if there's a way to put a frost effect on the corners or the spine, that would be amazing.

Additionally, I'd like the spine to be a dark blue color, if that's possible without causing issues with the front or back cover -- or running the risk that the spine will bleed over onto the front or back in the actual printing. Every book in this series will be written from a different character's point of view, so the idea of the different colored spines is to feature the color that goes with the character. This is a "nice to have" option, though. If it's too complicated, it's not essential.

Even though it's a story based on anime, I don't want the cover to look like a manga. The storytelling style is similar, but I don't want people to be confused. This is a full-length novel about superheroes defending a city. I would like it to look as realistic as possible.

Creative Book Cover for a Female Dating and Relationships Title
$ 199
Women reading this book are usually younger and they’ve just been through a breakup. They don’t know how to collect the
150
entries
24
Designer
I need your inspirational eBook cover design and expert advice on refining my subtitle
EUR 299
Frustrated people (early-adulthood to middle-aged) who're too busy and too distracted to keep in shape; and who're tired
158
entries
22
diseñadores
Book cover for non-fiction
US$ 199
162
entries
14
designers
Book cover for non-fiction
199 US$
156
entries
13
diseñadores
paper back and ebook cover
GBP 319
Someone is reading this book to learn the most effective way to write a to-do list that will keep them motivated and pro
51
entries
20
diseñadores
The Garden of Shadows and Bones
MX$10,099
My books are geared towards New Adult. They are mainly about dark fantasy with witches and magic.
62
entries
24
デザイナー数