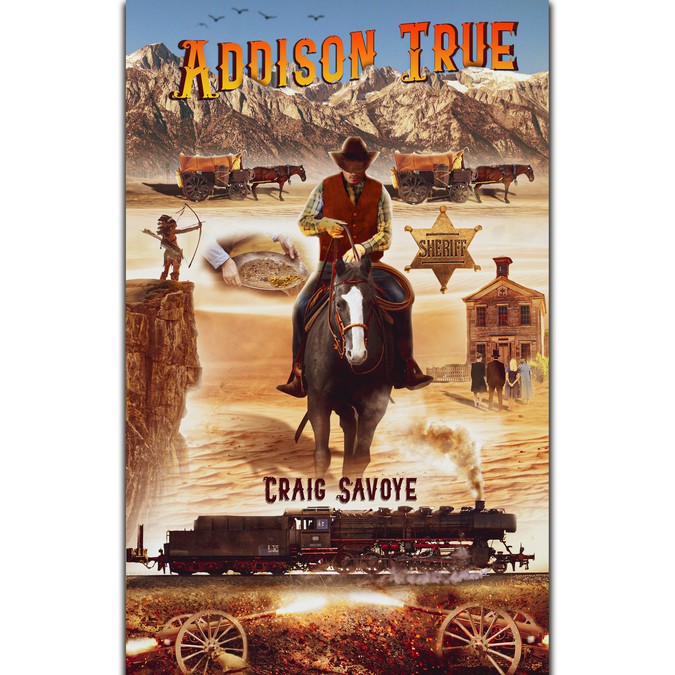 Forgive me the long instructions here, but I’m seeking cover art for a sweeping 1,000-page ebook novel that stretches from 1849 Gold Rush California to the western theatre of the U.S. Civil War and a final chapter back on the plains—so no single image could possibly represent all that occurs in the story. What I am hoping for is a “collage” – but not of the paper mache type. Simply a collage of images that are blended together. Some movie posters give a sense of what I mean: Apocalypse Now, the original Blade Runner, Raiders of the Lost Ark, and most of the Star Wars movies, especially Episode 4. Ignore the movie itself, even the specific elements, the color, or the darkness of those posters – it’s the blending of them into “one” image I’m hoping you can match, and understand that’s what I’m going for.

The central image will be the protagonist, Addison True. He is an all-American hero. For two reasons I want him looking down from his horse so we’re looking at his hat and can’t see his face: not only does he age from 18 to 36 in the novel, but I’d rather leave his appearance to the imagination of the reader. Addy has a horse named Blue—a blue roan—that is with him throughout the last 700 pages of the book and thus earns an appearance on the cover.

As for the images generally surrounding Addy…well, this is where it gets tough. Quickly: in chapter 1 he’s in the Sierra Mountains for the Gold Rush; chap 2 he leads a snow-blocked wagon train down the back side of the Sierra; chap 3 he takes care of business in San Francisco; chap 4 he pioneers a stagecoach route across the southwest (1854); chap 5 he gets caught in the Sioux War of 1855 on the plains; chap 6 he’s the sheriff of Leavenworth, Kansas; chap 7 he runs a Pony Express station in Nebraska territory; chaps 8-9 he’s a spy in the Civil War, gets caught and escapes north; chap 10 he’s a scout during construction of the transcontinental railroad.

Let’s go back and start with Addison. Since we are not going to see his face, his hat is important. But Stetson did not start making cowboy hats until 1865, so that won’t do. Google Image “Teddy Roosevelt and the Rough Riders” to see an image of him and them (about 50 troops) atop San Juan Hill in a famous photo. Even though its 1898(?), a lot of those hats could serve as a model for Addy’s. His shirt and pants can be rough, homespun clothes. His horse definitely needs to be a Blue Roan. So Addy, mounted on Blue, looking down is the central image.

Let’s go clockwise from the left on my attached "sketch" (pathetic, I know):

--On the far left, that is meant to be an Indian standing on a precipice in full headdress (three different chiefs play roles in the story and Indians appear in 7 out of 10 chapters). Expression is stoic. I don’t want him to appear hostile, but if he looks naked without a weapon, maybe give him a lance.
--next is a miner’s pan being tilted. Maybe show a few shimmering nuggets of gold in it, and water dripping out.
--a wagon train crosses an elevated horizon line. Addison leads a winter-stranded wagon train down the east side of the Sierra Mountains in California, so those silhouetted mountains are supposed to be the Sierra.
--sheriff’s badge. As long as the word sheriff is on there, the type of badge isn’t critical.
--the next element will take some explanation (and is beyond my ability to sketch). It’s a house with a family of four in front of it. Addison befriends such a family on the wagon train in chap 2 (they subsequently return to Missouri). The wife becomes orphan-Addy’s surrogate mother throughout the story, the older daughter is the love of his life (but ends up marrying another), and the younger daughter becomes Addy’s wife. The image is supposed to be the family standing in front of their [1860] St. Joseph, Missouri home. The individuals will likely be too small to see, but in terms of a description: the father is a successful merchant (so he’s in a suit), but a bit of a cheat, the wife is the perfect mother, two daughters are both pretty, older with auburn hair, younger with blonde.
--That’s a Pony Express rider dashing down the image. “U.S. Mail” should be prominent, otherwise it won’t be clear what the image represents.
--Addy is a scout for the transcontinental railroad in the last chapter, so a steam engine and train, circa 1866. [Idea: white smoke from the steam engine could wisp across the entire lower part of the image and obscure (or serve as) the borders between elements (like the Pony Express rider and train, stagecoach and train)
--there are two chapters in the Civil War. In one, Addison is a spy for General Grant at Vicksburg. In the second, after being captured, he escapes north in partnership with a slave. I don’t think either of those narratives lend themselves to a ready, iconic image, but I HAVE to have some sort of Civil War imagery, so I am simply imagining Union forces on the left side attacking Confederate forces counterattacking from the right. Like the engine steam, smoke from the battle could help create a “northern” border for the image.
--That last element is a rushing stagecoach. I have both stagecoach and Pony Express rider moving outward, just because they seem to fit in the space better that way. I defer to the artist’s eye if he or she feels those must be turned inwards, though tilting them up as well as turning them inwards would not seem to work to my eye.

Overall, my image looks too busy. I think the sheriff’s badge and gold pan are too big and could easily be shrunk, but overall, it’s about the blending of elements. If that is done right, the “busyness” should rather end up creating one attractive whole.

One big curve ball now that I am through with all that: if the artist deems the image just too busy, I leave it to your discretion to drop a few elements, or rearrange them. I am not tied to the attached scrawled image. What I really want is something appealing, professional, and representative of the story.

I’m expecting digital art, of course, rather than some sort of oil painting or watercolor.

The e-book cover should be a vertically-oriented rectangle with a ration of 1.6:1.
the title ADDISON TRUE should be in a western font across the top and
author’s name near the bottom in the same western font: Craig Savoye

Here are ebook cover requirements direct from Amazon:
KDP currently accepts JPEG (JPEG / JPG) files for cover images. We apply additional compression to images when displaying them on the website. For the best results, upload your images with minimal compression. The ideal size of your eBook cover art is a height/width ratio of 1.6:1. This means that for every 1,000 pixels in width, the image should be 1,600 pixels in height. To ensure the best quality for your image, particularly on high definition devices, the height of the image should be at least 2,500 pixels. Ideal dimensions for cover files are 2,560 x 1,600 pixels. Your cover image must be less than 50MB. Try to avoid compressing your files. This can affect the quality of your cover when displayed on reading devices. For the best results, images should have a minimum resolution of 300 PPI (pixels per inch). Product images display on the Amazon website using the RGB color mode or profile. When saving and uploading your cover image file, save your file as RGB (not CMYK or sRGB) Cover art with white or very light backgrounds can seem to disappear against the white background. Try adding a narrow (3-4 pixel) border in medium gray to define the boundaries of the cover.

Back "live" for a final note: the only other time I used 99Designs was for a political cartoon and the response was terrific, but I also felt guilty at the amount of artist time invested since I could only choose one image. Please do not spend hours on this. Just enough to show me we’re on the “same page”: you get what I’m trying to communicate and you represent it (a portion of it) visually, and I get to see your style. I tend to like realism, but in a rendering like this—with many elements blended together—“realism” is almost an oxymoron. I’m afraid I’m not going to know what “style” I want until I see it, but I don’t want anything cartoonish.

Book Cover for why liberals hate conservatives and vice versa
$ 299
70% men, 30% women. Major interest in current affairs, politics, psychology, sociology.Age range 30 and upwards. High
321
entries
51
Designer
Creative cover for YA/Fantasy novel
539 AUD
Anyone aged 15+. Lovers of Lord of the Rings and Game of Thrones should enjoy this novel.
139
entries
54
diseñadores
Book cover for a hilarious book about cats
399 $US
People in their late 20s and 30s; people who love cats and cat memes; people who love crime novels; people who love hist
60
entries
22
designer graphistes
Simplistic cover design for self-help book
299 US$
This self-help book is gender neutral, and can help adults as well as young adults.
151
entries
41
diseñadores
Book cover for an everyman's guidebook on achieving financial independence
449 €
Younger professionals, older professionals, people with savings, people who are interested in financial markets but don'
373
entries
52
designer
Design needed for e-book in the art of taking the perfect dick pic
A$269
Men 18-40. The original audience follows a leading men's lifestyle publication, which presents the latest in cars, gear,
130
entries
16
デザイナー数