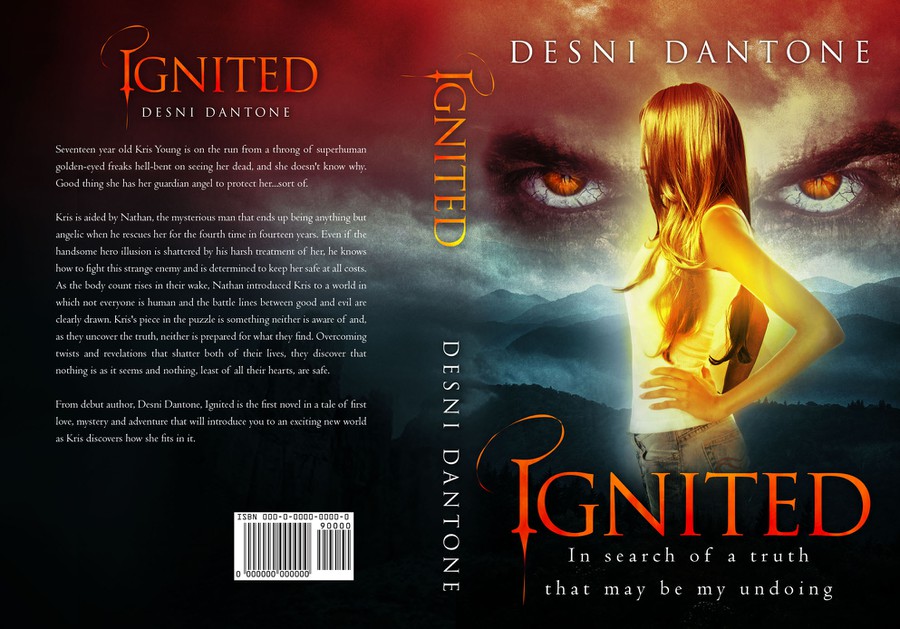 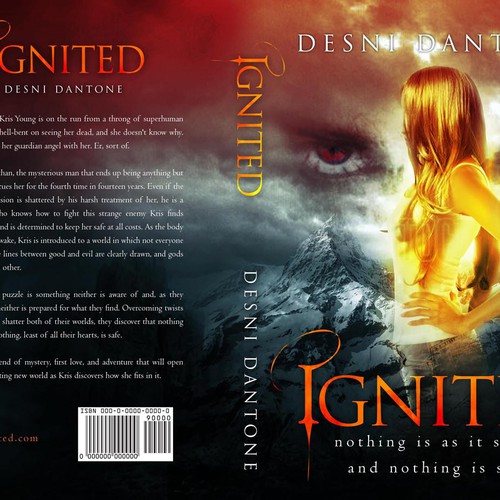 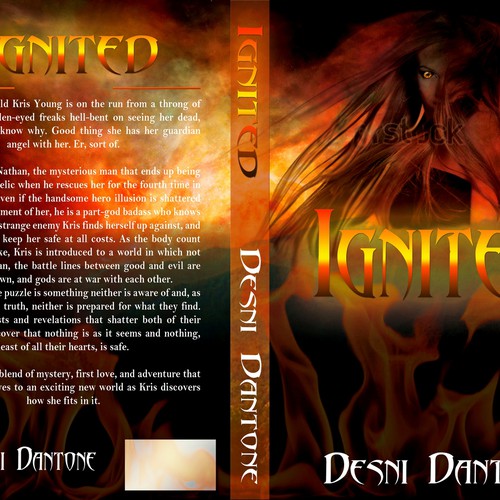 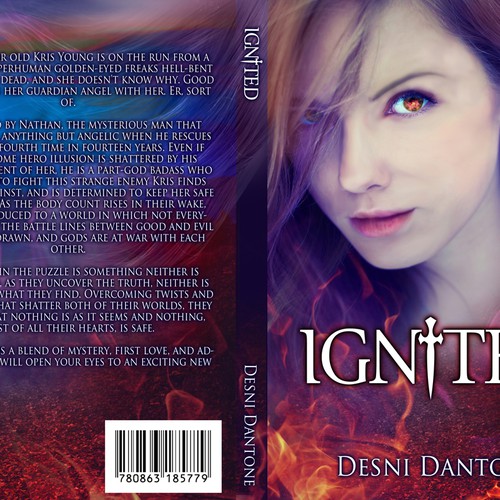 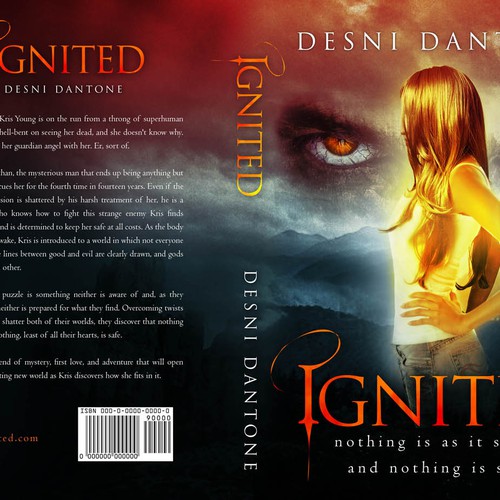 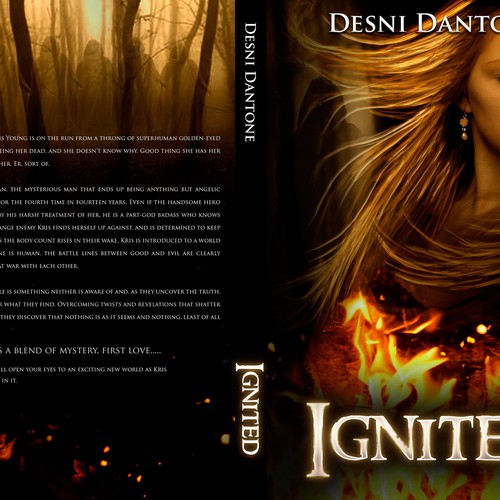 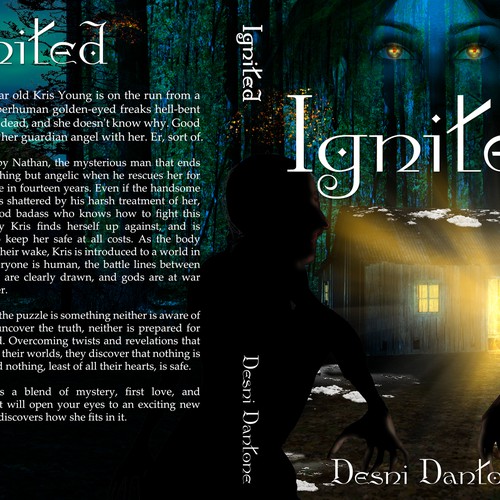 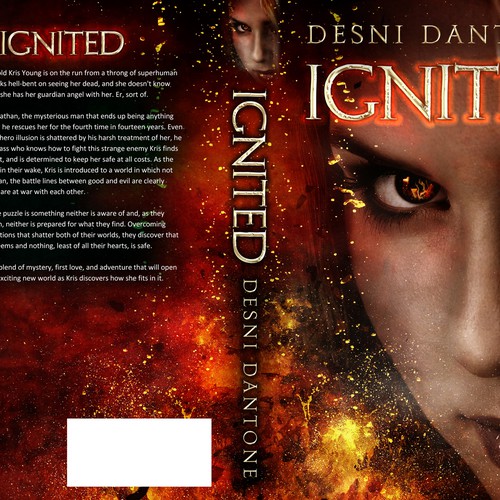 I am looking for a book cover, spine, and back cover for my self-published novel, Ignited. It will be used for both e-book and printed book versions on Createspace and Amazon.

Ignited is a young adult paranormal romance novel with a lot of mystery and adventure rolled in that will be targeted at the 16+ young adults.
The main character is a girl, named Kris, who is seventeen years old, with strawberry blonde hair, amber eyes, short, petite. She has a sharp wit and sarcastic tongue. She's not a girly-girl, doesn't wear much makeup, but has a natural prettiness, but definitely not glamorous.
She has been rescued multiple times over the course of her life by the same man, who does not change physically—Nathan. He is described as tall, buff, short light brown hair, intense blue eyes. He is a part-god hybrid human with exceptional strength and speed.
They are on the run from an evil hybrid army, which are the offspring of demigods that have sided with Hades in the war between good and evil. They endure days and nights in the cold Blue Ridge Mountains in the middle of Februarly, and end up hunkering down in a cabin in the middle of nowhere. While there, Nathan teaches Kris self-defense, how to shoot a gun, and about the part-god world that he belongs to. They also learn that Kris herself is a hybrid, which takes them both by surprise when she begins the change.
Ultimately, they learn that she was created by the most powerful demigods on the side of evil, and she is to become The One that swings the tide of power in the direction of evil once and for all.
Kris and Nathan are determined not to let that happen. This is the first book in a series that will continue with their adventures as they set out to stop Kris from following the destiny she was meant for.

A few things that are important parts of the plot that might work well as a part of the cover include:
The Blue Ridge Mountains is the setting for the majority of the plot. First, they hike through the mountains while on the run, then they end up in a cabin in the mountains.
The cabin in the woods, where they spend the bulk of their time, sets along the edge of an oval clearing that is surrounded by woods.
There is mention of a river multiple times throughout, into which a car Kris was riding in at the start of the novel plummeted, leading to the death of two of her friends. Nathan had pulled her from the car and resuscitated her on the river bank.
Eyes are a big part of the story. Though Kris’s eyes have not changed yet, because she has not completed the change, the title Ignited symbolizes that the fire of evil has been started within her.
While witty and fun in areas, there are dark themes to this book. I imagine a dark cover, with encroaching flames of hell or something ominous-like. The evil demigod army that is after her is described as having eyes that shine a golden hue, that Kris describes as portals to hell. They are pale and ugly, demonic-like.
Nathan had been her guardian for 17 years, watching over her from a distance, keeping her safe. I’m not sure if he should be included in the cover or not, but if he is, it should be distantly.

I like the idea of a faded image underlying the cover, whatever that image may be, and whether it be just the back, just the front, or both.
I would like to have a spine design as well.
The author name should be small: Desni Dantone
The title: Ignited, font and size is up to designer, whatever works best.
Will need room for a barcode on the back.
No author picture or biography.

Seventeen year old Kris Young is on the run from a throng of superhuman golden-eyed freaks hell-bent on seeing her dead, and she doesn't know why. Good thing she has her guardian angel with her. Er, sort of.

Kris is aided by Nathan, the mysterious man that ends up being anything but angelic when he rescues her for the fourth time in fourteen years. Even if the handsome hero illusion is shattered by his harsh treatment of her, he is a part-god badass who knows how to fight this strange enemy Kris finds herself up against, and is determined to keep her safe at all costs. As the body count rises in their wake, Kris is introduced to a world in which not everyone is human, the battle lines between good and evil are clearly drawn, and gods are at war with each other.

Kris's piece in the puzzle is something neither is aware of and, as they uncover the truth, neither is prepared for what they find. Overcoming twists and revelations that shatter both of their worlds, they discover that nothing is as it seems and nothing, least of all their hearts, is safe.

Ignited carries a blend of mystery, first love, and adventure that will open your eyes to an exciting new world as Kris discovers how she fits in it.

If there are any questions, if you have an idea you would like to run by me, please contact me. I am open to suggestions, as writing may be my thing, but artistic creativity sooo is not.

Comienza ahora
design a modern, bold book cover for a business book
US$ 499
This is a business book. Business leaders, CEOs and executives would read the book.
243
entries
53
diseñadores
Book cover needed for ultimate fan guide to the Fast and Furious movie franchise.
US$ 749
Fans of the "Fast and Furious" movie franchise. These movies are consumed by a massive global audience, ranging in age a
110
entries
37
designers
"Imagine knowing everything there is to know about the way a man thinks and feels"
$ 399
Woman and Men
86
entries
16
Designer
Amazon Ebook Cover for german ebook (Topic: Motivation for studying)
299 €
Students
96
entries
16
designer
Design an eye-catching cover for suspense novel
$399
A great beach for avid readers.
72
entries
24
デザイナー数
Captivating book cover to inspire hope in the world, and the power of positivity!!
1 599 $CA
Adults in the self- help category, those facing cancer, those who are care givers, anyone who wants to up-level their li
462
entries
82
designer graphistes
Más información sobre diseño de portada de libro o revista
Vea como funciona