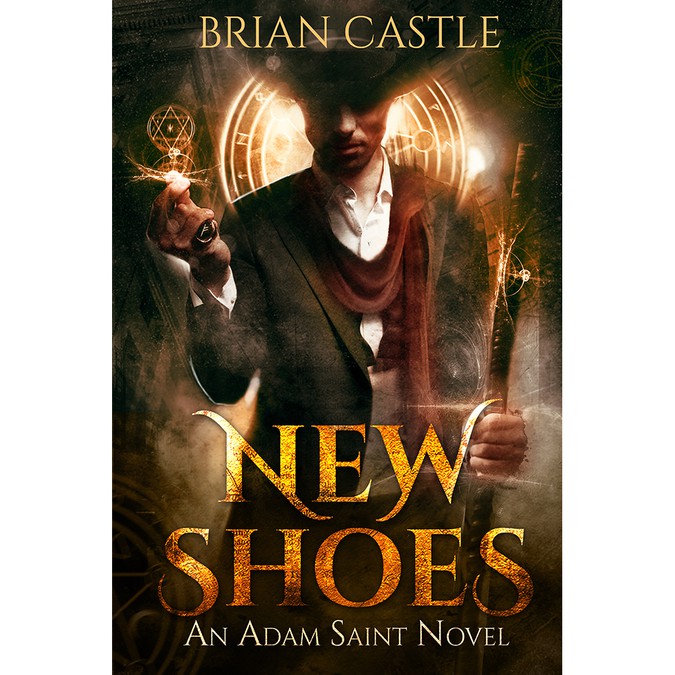 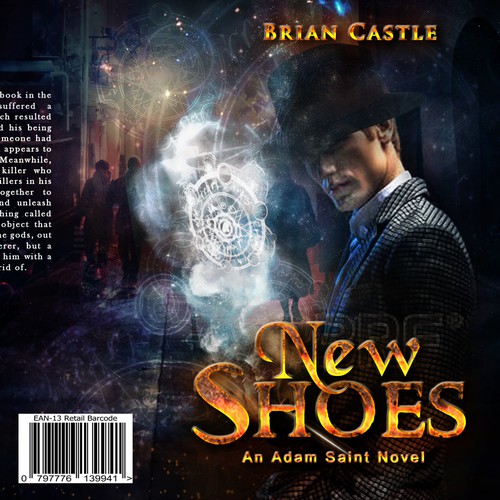 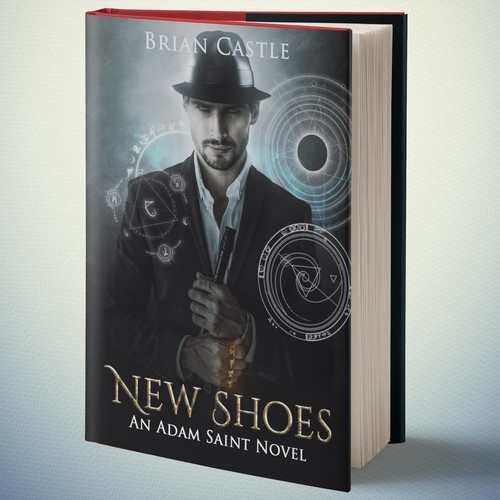 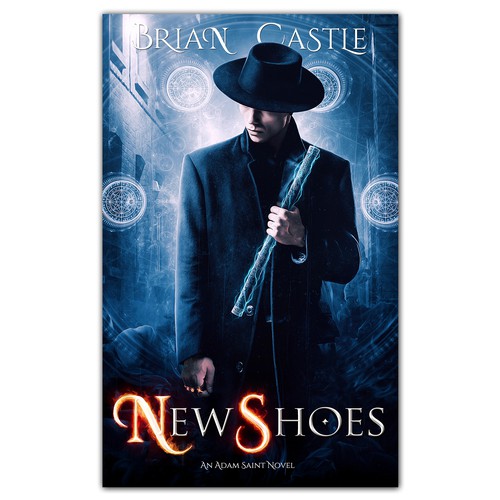 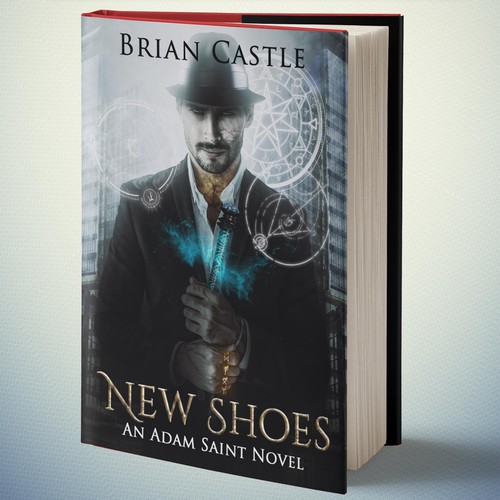 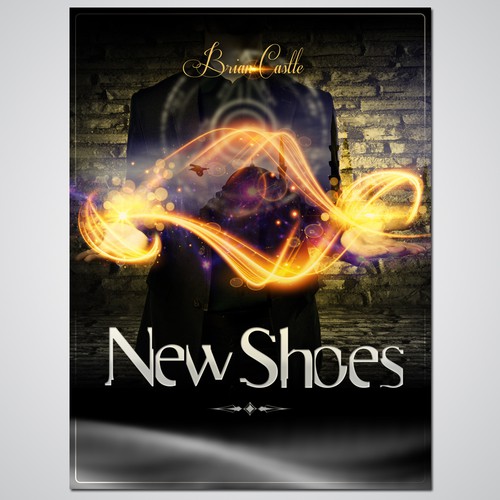 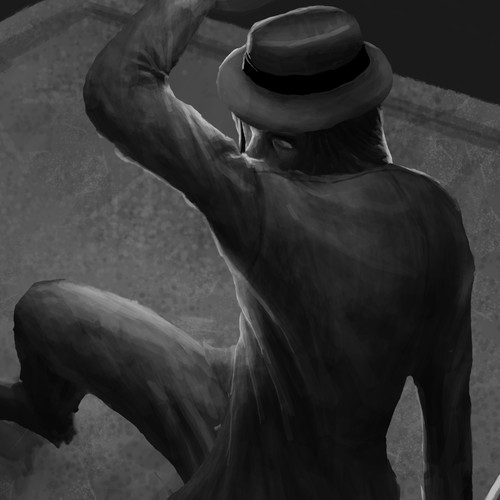 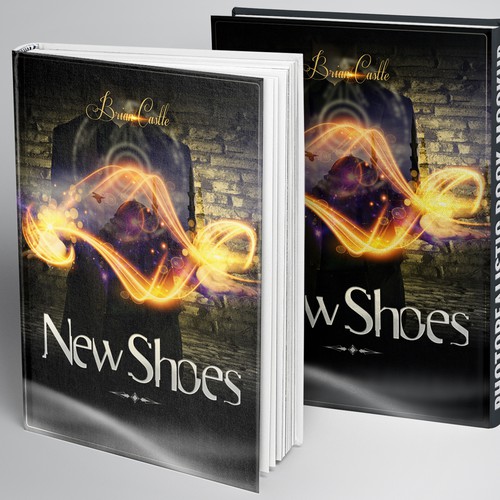 New Shoes is the (new) first book in the Adam Saint series. Adam suffered a possession in his childhood which resulted in the deaths of his parents and his being adopted by Peter Saint. Now, someone had murdered his adopted father and appears to be coming after Adam next. Meanwhile, Adam is haunted by a serial killer who seems to have several copy-cat killers in his wake, all of them working together to change the world drastically and unleash chaos on mankind using something called the Spear of Marduk--the very object that first sealed the Old Magic, and the gods, out of our world. Adam is a sorcerer, but a pariah as his possession has left him with a taint that he can never get rid of.

Readers of "badass urban fantasy" which is a real thing--they're men and women generally between 20 and 50. It's considered men's fiction but will appeal more to women with a gay protagonist. Readers of Dresden Files, Kate Daniels, Iron Druid, and Cal Leandros as examples.

Most urban fantasy runs in the more somber, blues, reds and purples.

Standard 6x9 ebook cover. The mood should be action-oriented, marketable urban fantasy, adhering fairly closely to the style of books like the (newer) Dresden Files covers. The main character, Adam Saint, is something of a take off on a character like Constantine--well dressed but grungy, tortured, etc. He should absolutely be present on the cover to be on market. The cover should scream "this is an urban fantasy about a dude who has problems and kicks ass." The title should be easy to read in a thumbnail on an ebook retailer. Adam is in his twenties but could pass for his thirties. The title is meant to be both ironic and point to the expectation that this book is full of snark.

This is gritty, dark, urban fantasy thriller. The text on the front should only include "New Shoes", "An Adam Saint Novel", and "Brian Castle".

Of note in the story is a tattoo that Adam has on the back of his neck, so it is potentially an interesting detail to highlight on the cover but not critical. If shown at all, it should have an appropriately mystical look to it, a kind of magic circle style appearance the fashion of The Key of Solomon. An example is included below--all the images from the KoS are open license since they're ancient. If you do use an open license image like one of these, be mindful of what it means, that's the sort of thing some fans obsess over. Designing something unique is perfectly fine, otherwise I'd need to know the source and research it myself to make sure it fits. The purpose of the tattoo is to keep the taint in his magic in check--if you're occult oriented and have some idea for that, great, but that's not research I expect you to do for me.

Adam in the course of the story utilizes a short black staff with silver runes laid into it and a set of copper knuckles with runes on them. Those are acceptable details to include as well if you're inclined and can do it well, but aren't critical.

Adam is a magic user, so incorporation of something to show that on the cover (either using the above mentioned artifacts or with some other effect) would be ideal.

Part of this story specifically involves an artifact called the Spear of Marduk--it's an ancient pre-historic artifact and is another potential option for a focus in the imagery on the cover.

This story takes place in Portland, Oregon, so backdrops of Portland are fine but not critical--some indication that the setting is an urban one is ideal, though. Imagery indicating that there are sort of two worlds involved--the mundane and the magical--would make for interesting imagery as well. The theme in the book has a lot to do with choosing light or dark, good or evil, and there's a lot of "black and white" morality versus "gray area" morality. I am a fan of symbolism in book covers.

When I imagine the perfect cover, I see Adam saint facing away and looking over his shoulder. He wears a black fedora type had, the kind with a shorter brim, and has a white button up shirt on with a nice kind of long black jacket--stylish wool with a wide collar and lapels. His tattoo peaks out from the collar on his neck. He's positioned toward the right side of the cover, one arm out to the left, his hand holding his staff, maybe a scarf showing as it blows in the wind. In the background, the city of Portland is under a lightning storm (never happens in Portland, you'll never find a stock photo of it). Magic curls down his arm and along the staff, and his expression means bussiness. He's got scruff, he hasn't shaved in days while he fights the forces of evil and such. Well dressed but haggard at the same time. Brian Castle is along the top of the cover, with New Shoes under Adam's outstretched arm. "An Adam Saint Novel" in smaller type below that. Adam Saint himself is ostensibly caucasian--but if this is somewhat ambiguous from lighting, etc., I'm okay with that. His race is never stated in the books, and that's intentional, although, I'm a white guy and probably wrote a culturally "anglo" character.

But, all of that said, aside from the text and some indication of Adam's presence on the cover, the rest is negotiable--I'd prefer to be impressed by something I didn't expect than to be bored to death by forcing artists to stick with everything on this list. Be creative, I'm looking for a cover artist I can work with continuously throughout this series and on other series as well, at rather a better rate than this contest will pay.

It is not a YA book and needs to keep some distance from the current typical fare in that market. Specific things to avoid: no shirtless Adam Saint. If there's a visible tattoo it needs to look magical/occult--not tribal stuff or 'common' kinds of tattoos. Avoid cartoon-ish, anime, manga style art, that's not my demographic for this series.