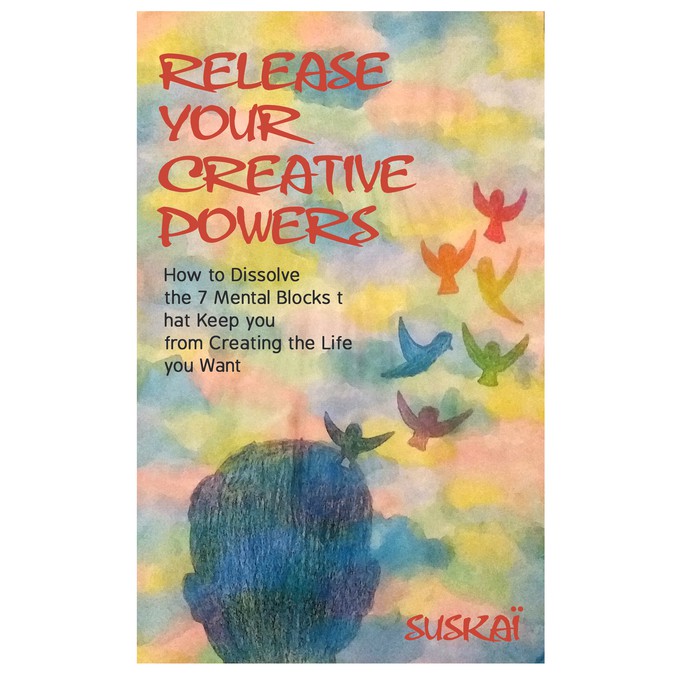 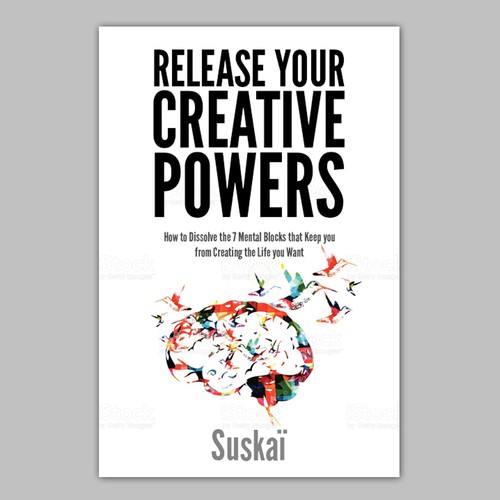 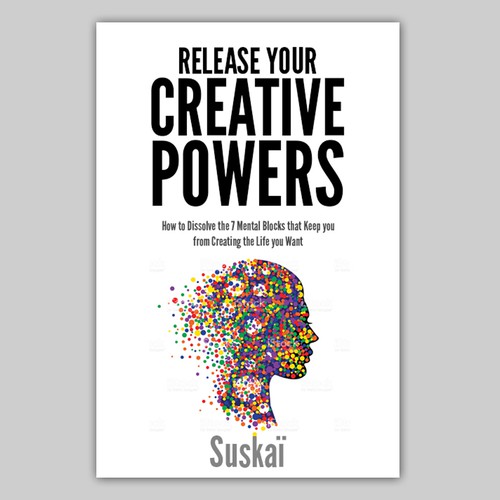 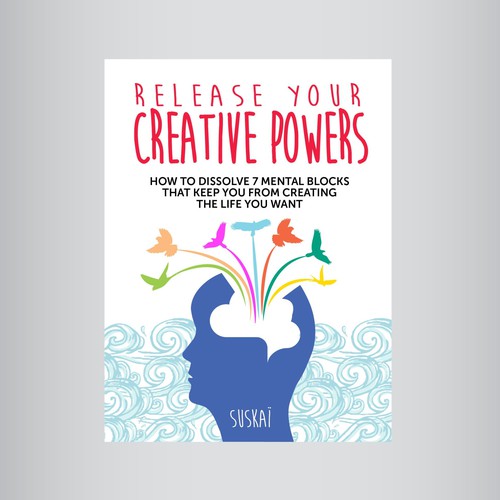 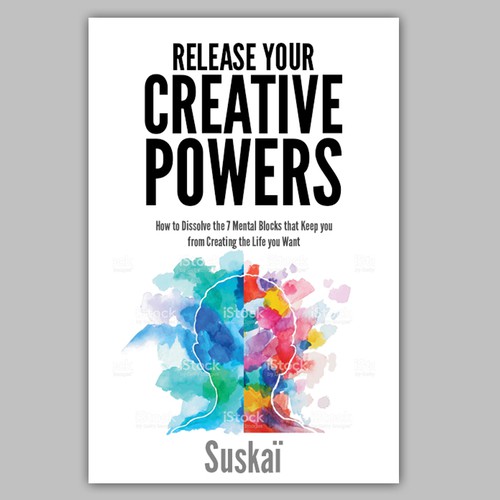 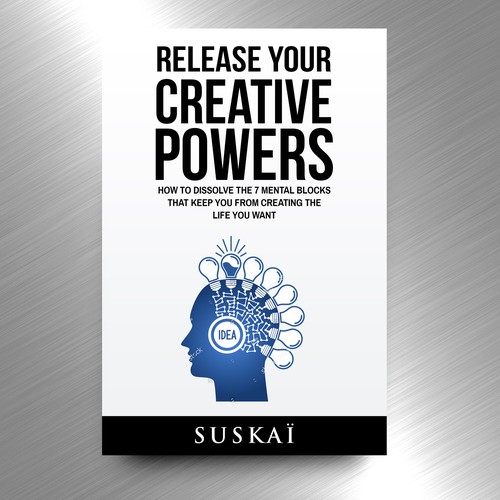 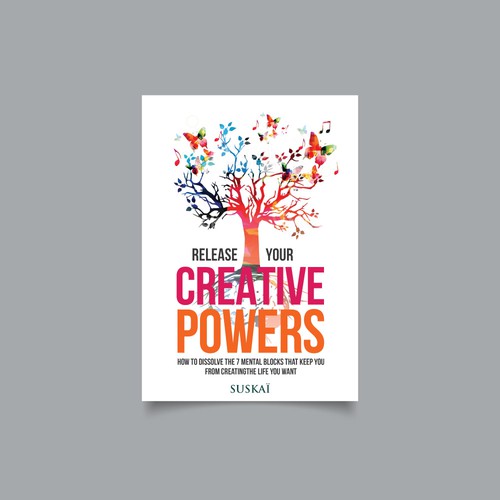 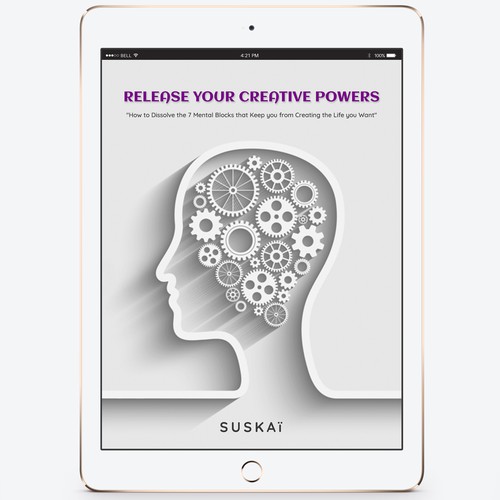 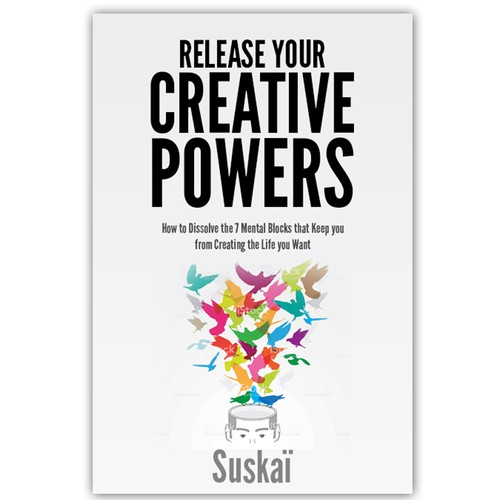 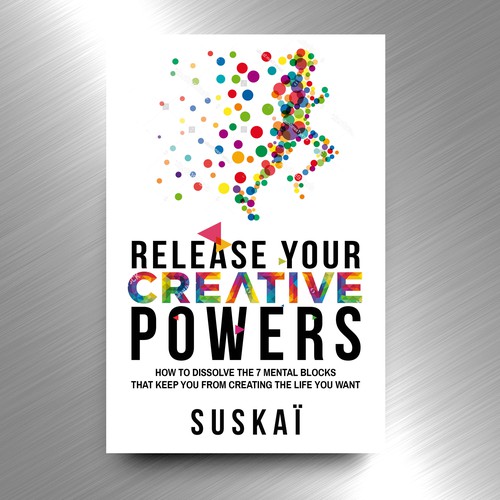 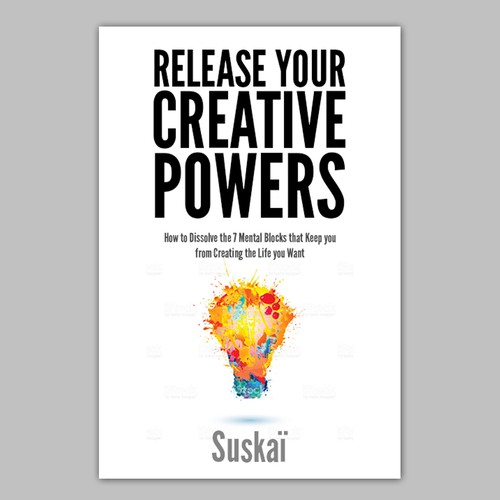 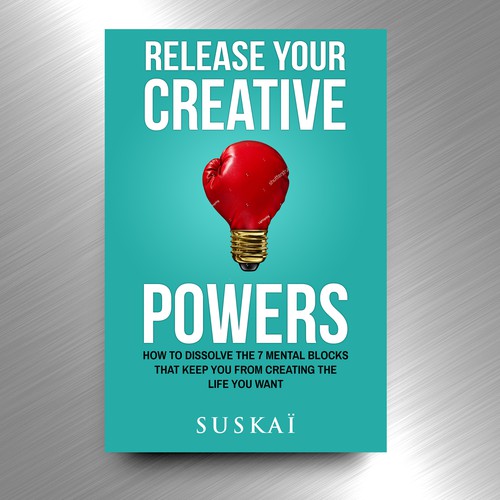 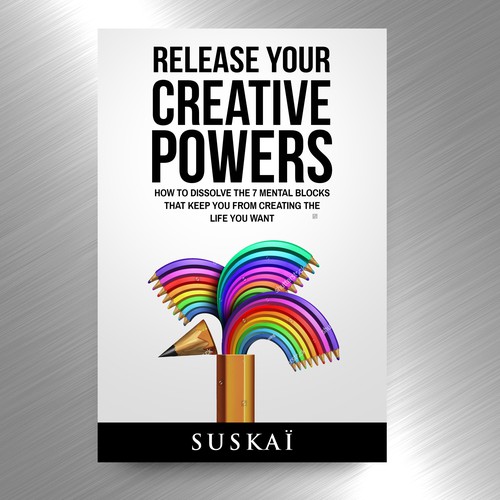 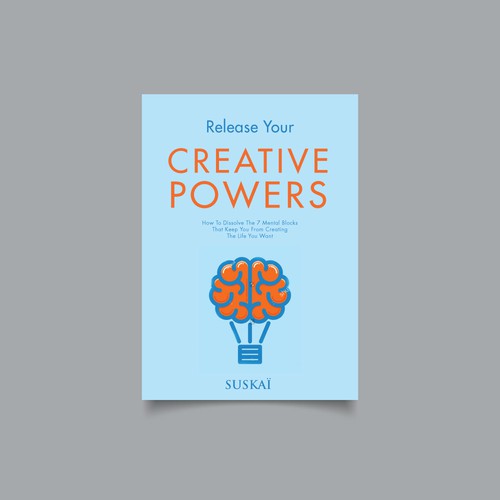 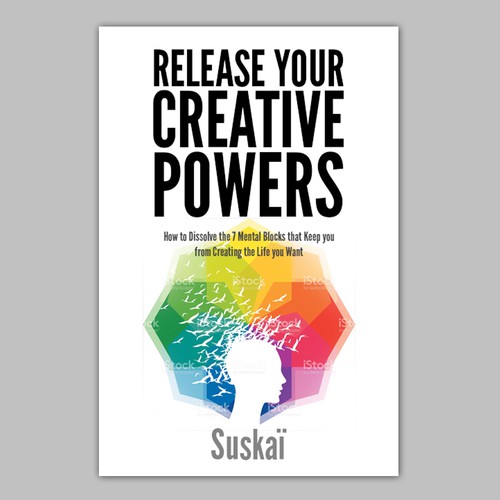 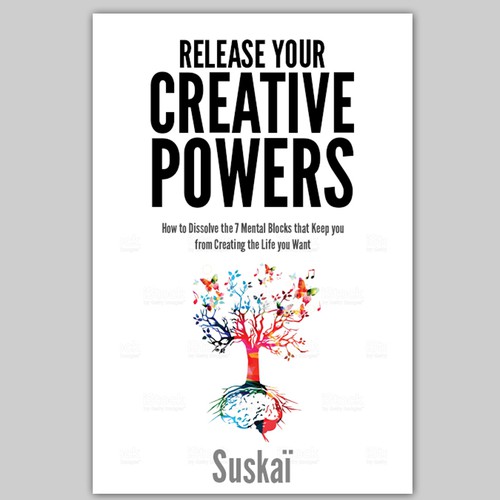 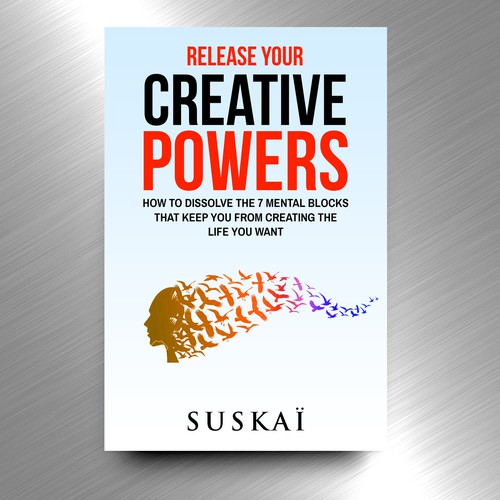 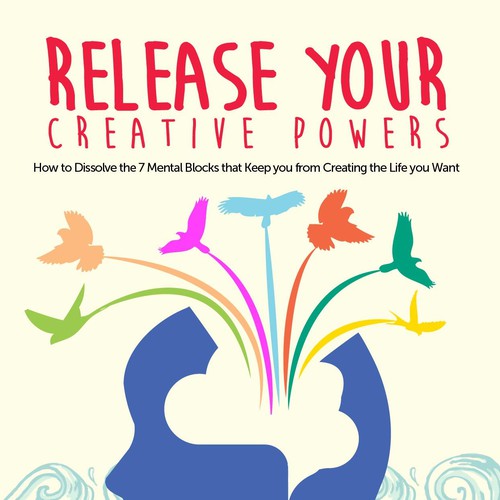 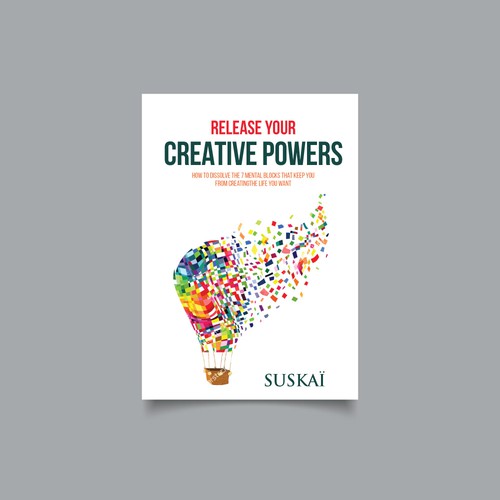 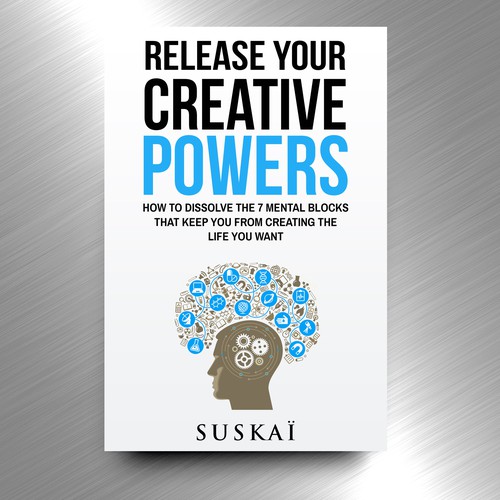 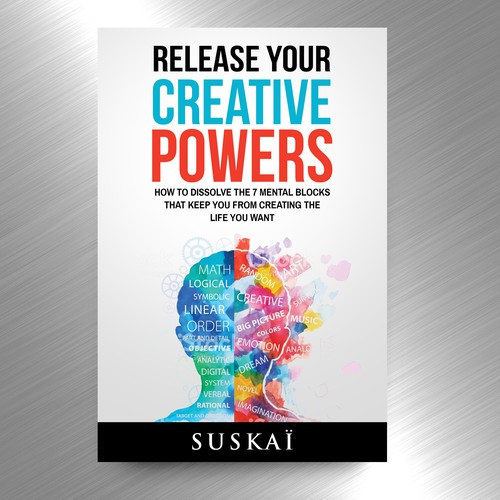 I am starting an email-based business to promote offers for personal development.

This e-book will be a PDF offered as a "free guide" that I will use in an "Opt-in" page to capture lead emails, and get subscribers.

It describes how our fears unknowingly hold us back from creating the life we want, and analyzes how those fears result from our misinterpretation and unawareness of our deepest needs.

The e-book also suggests strategies on how to approach each fear and need, to create the life we want through more Freedom based on a fearless and playful approach of life.

The e-book will be offered as a free gift on an "opt-in" page using a dedicated domain.

Bold and simple like through a kid's eyes. Love the asymmetry created by the floating coffin and the black color. The sea inspires mystery and gentleness at the same time -- which makes the book intriguingly inviting. I like how the red letters (and black coffin) pop up on top of the watercolours, creating a contrast, but not "hard" contrast that provide no breathing space... This is by far my favourite design of all those we could chose from.
Very neat, with the black "framework" nicely emphasising the content in the middle.
Very neat, "whole" and "none-flicting" shapes (like love does) which makes it easy for the eyes to interpret.

Was hesitating between orange and pink. The "7 colors of the rainbow" could be used somehow to add to the sense of lightness and playfulness of the creative process -- without feeling overpowering.

In general, I am hoping the design will breathe a sense of peace, creativity, and lightheartedness. I tend to enjoy artwork as a general rule, or simple drawings that even children could make (say with a simple pencil line).

The person looking at the image should be able to feel the sense of "relief" coming from the "release of creative ideas" from the mind.

I like the idea of a silhouette of a person's head "releasing birds", as if those birds were thoughts. (It represents "liberating the mind)." However, I am concerned that the final product might look too "cliché", so this is just an idea about how the design could illustrate the title and subtitle.

The image of birds of 7 different colors could also work.

Hoping the words "7 mental blocks" and "creating your own life" will pop out, somehow... and maybe also the word release to reflect the movement in a different font style? And maybe also "Creative Powers". But I have no definite idea about what should stand out more in the title.

I like the idea of a light enough water color in the background (like a canvas) from which several warmer colors could pop out from, or maybe a dominantly blue (aqua-like) background / cover.

The cover is for a standard size PDF document.

If a silhouette is included in the design, it would be preferred that the silhouette isn't "all black", as its one solid color. In general, if hard lines can be avoided (for instance, fluffy clouds rather than drawn with hard lines), that would be best.

Book cover for a hilarious book about cats
US$399
People in their late 20s and 30s; people who love cats and cat memes; people who love crime novels; people who love hist
60
entries
22
diseñadores
I need a powerful ebook design to stop domestic violence against disabled females
AU$ 269
Readers who enjoy reading poetry. Age 16+. Gender; mostly females. Location; globe. Anyone who experienced mental health
14
entries
3
Designer
Coming Out with Christ - (A Spiritual Journey To Finding My Resurrected Identity)
US$ 399
“A must-read life story of love and grace for our LGBTQ people, and every pastor, church leader, Christian, family membe
81
entries
17
diseñadores
Classy cover for a memoir. A woman discovers a family secret; her real father was a priest.
499 $US
Classified as memoir, I see my audience as women, middle aged plus. Women interested in family relationships and the inh
158
entries
38
designer graphistes
Modern art nouveau-style fantasy cover for printed book. Ebook cover project to follow.
GBP 319
Primarily for adults, but younger readers would enjoy it too. A general audience that likes epic fantasy with psychologi
8
entries
2
diseñadores
Need a book cover that draws in young adults to the world of pirates and mermaids.
399 $
Children and young adults. People who are interested in island life, pirates, mermaids and strong female characters.
60
entries
21
Designer

Comienza ahora
Design first-ever Eco Bible book cover
US$ 500
We intend this book to be bought and read by Christian readers as well as Jewish and secular ones. Most readers of the b
223
entries
32
designers
eBook cover for a crime story
€ 179
Any person who likes crime stories like The Godfather, The Departed, Breaking Bad, etc.
94
entries
20
designers
Western Landscape for cover of trippy novel.
US$ 549
Students, teachers, activists, hippies, armchair sociologists, veterans, stoners, coastal elites, outdoor types, dropout
57
entries
13
designers
The Garden of Shadows and Bones
$10,099
My books are geared towards New Adult. They are mainly about dark fantasy with witches and magic.
62
entries
24
diseñadores
Awakening - A Paranormal Romance Cover Contest
US$ 399
Women anywhere in the world, 18-60 years old
89
entries
22
diseñadores
Captivating cover for the book "The Way Home"
US$ 299
People in general interested in life stories. People that struggle with addiction.
121
entries
49
designers
Más información sobre diseño de portada de libro o revista
Vea como funciona