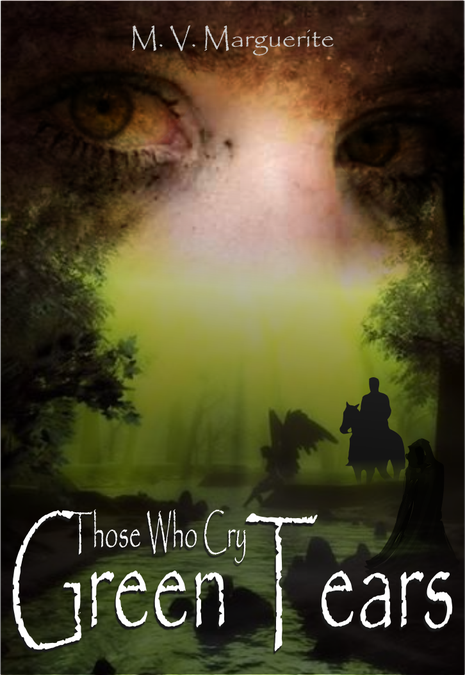 Your help is needed to create an eBook cover! 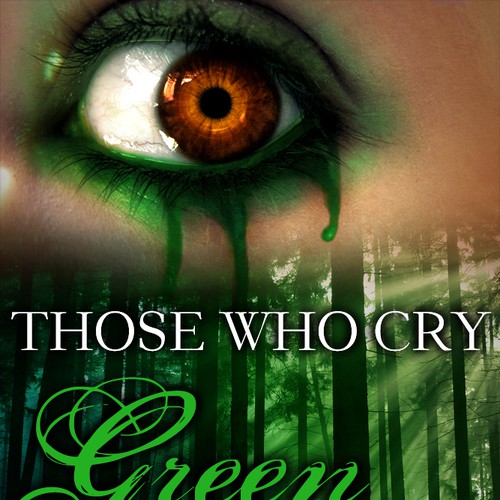 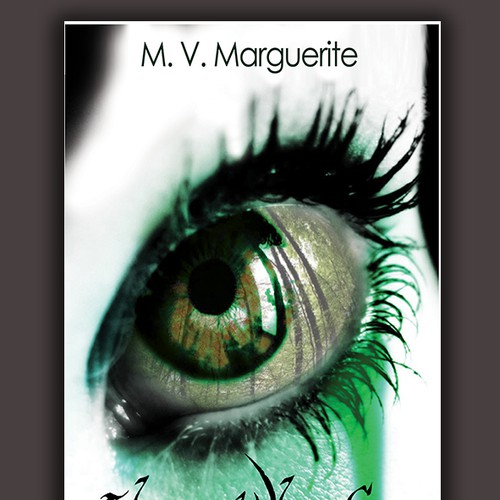 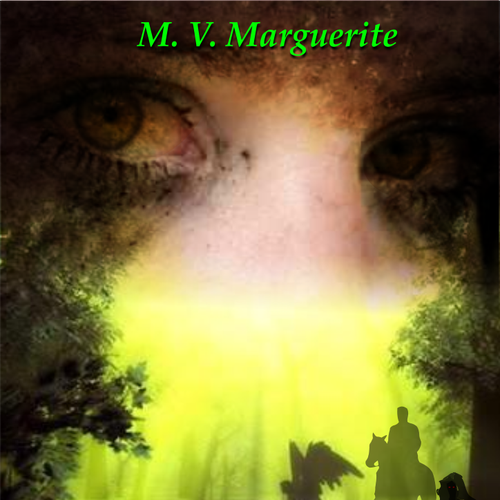 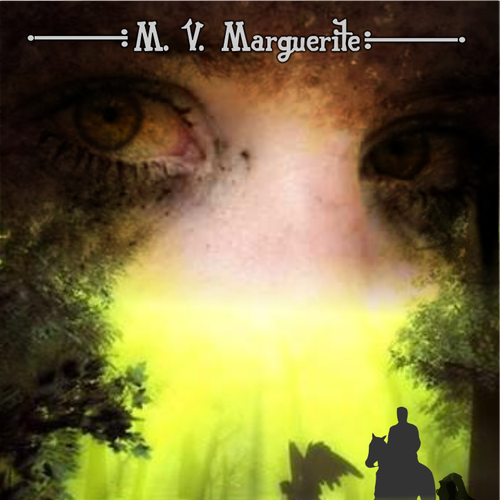 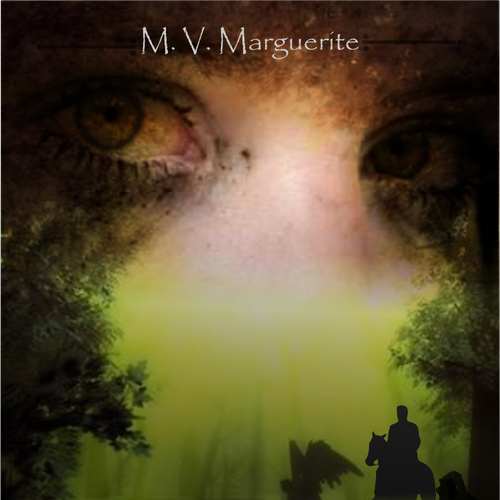 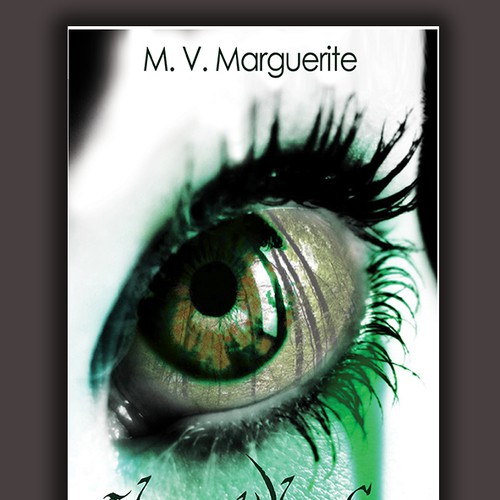 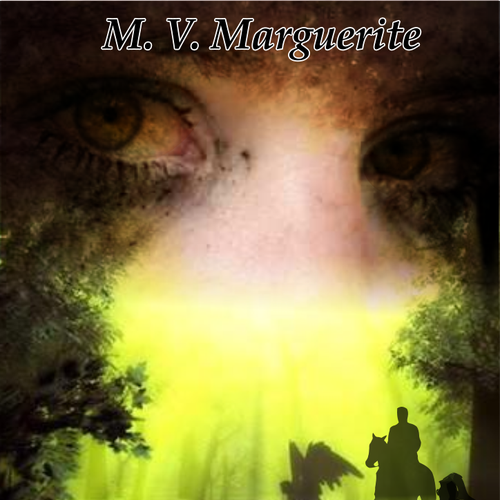 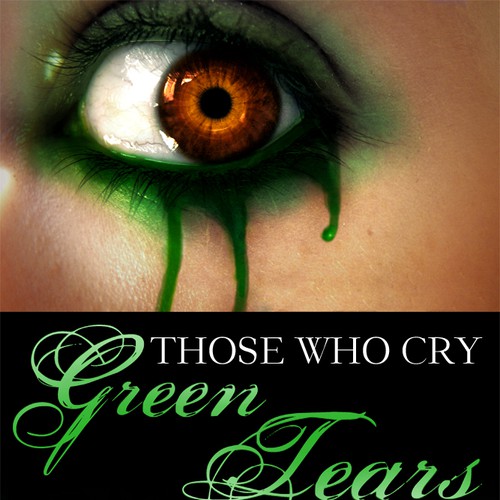 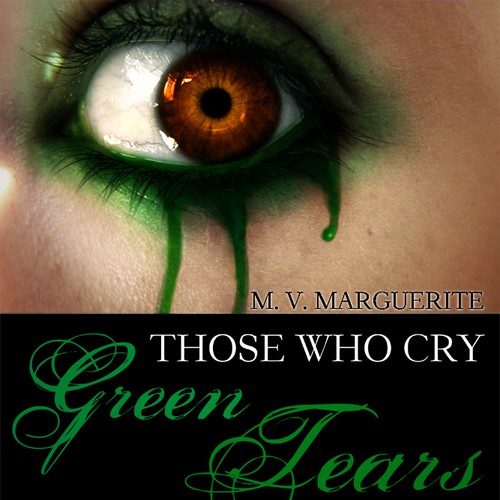 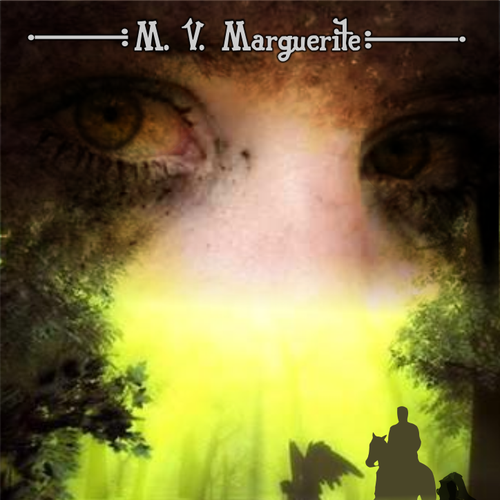 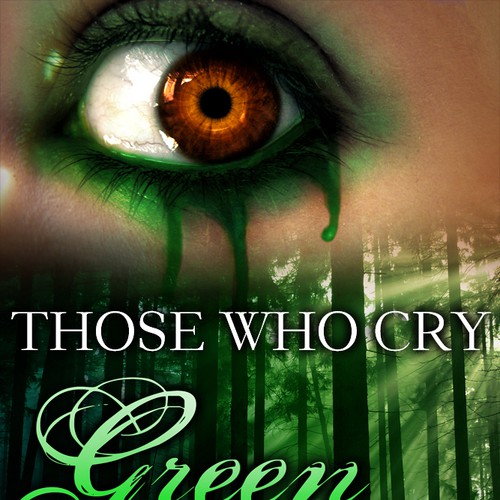 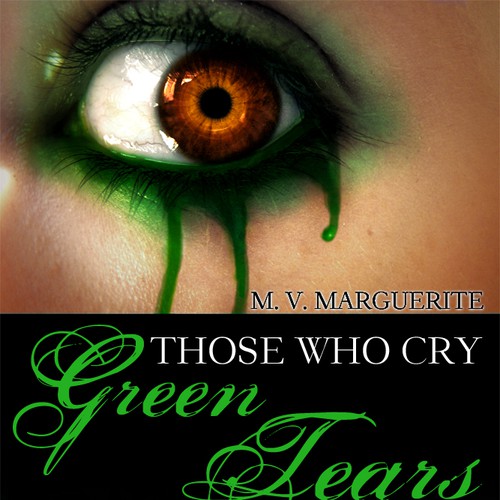 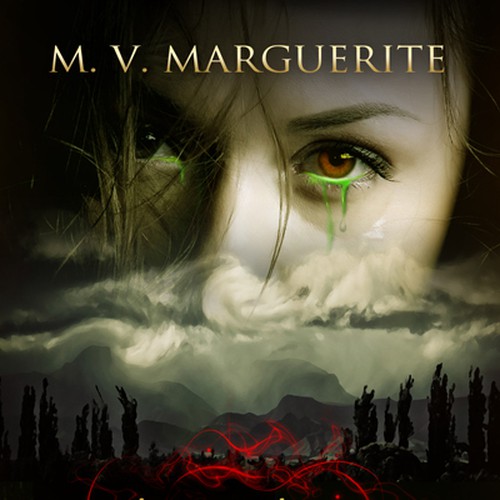 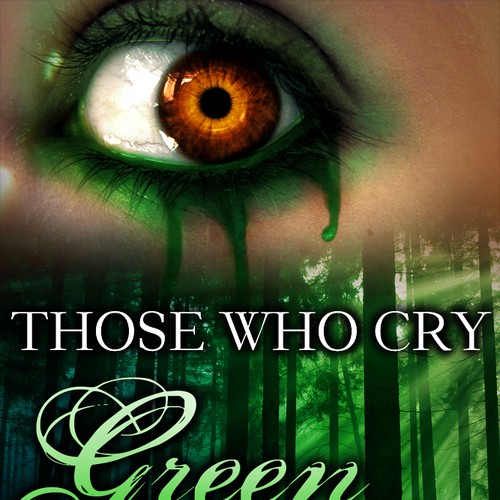 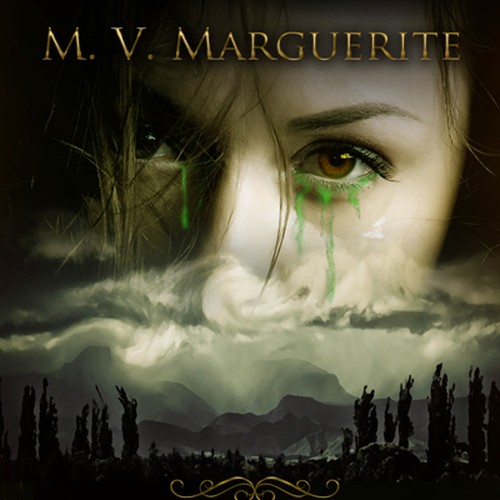 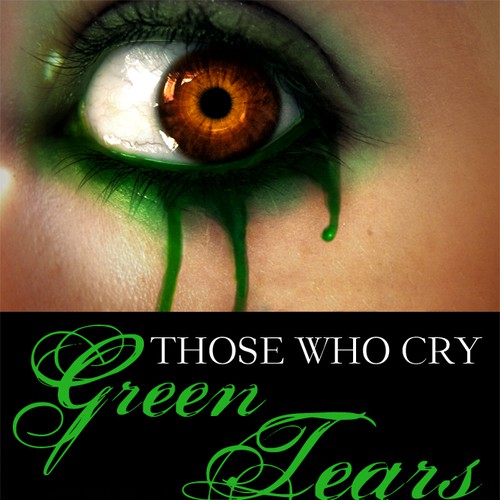 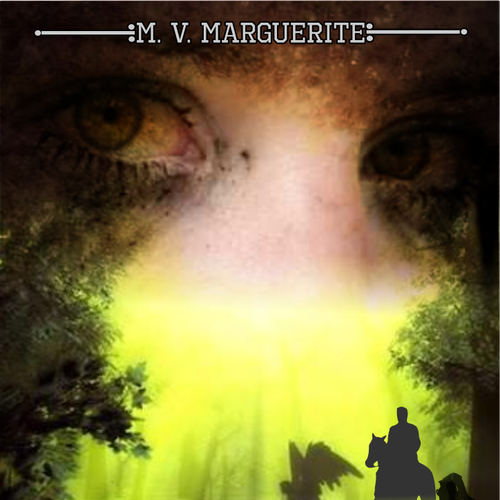 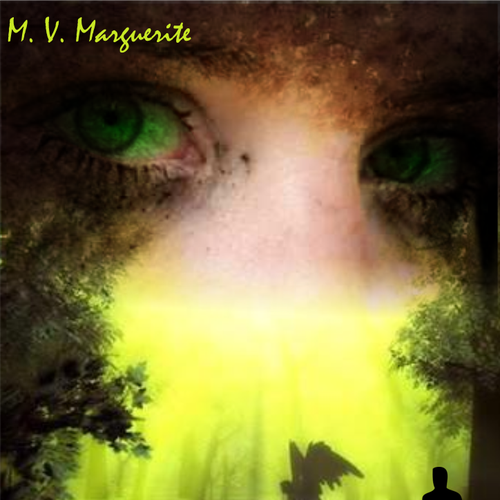 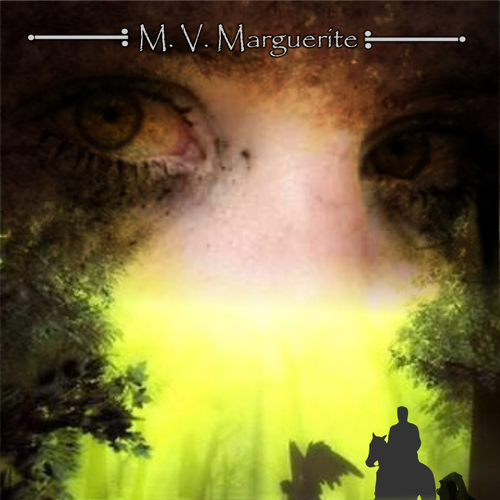 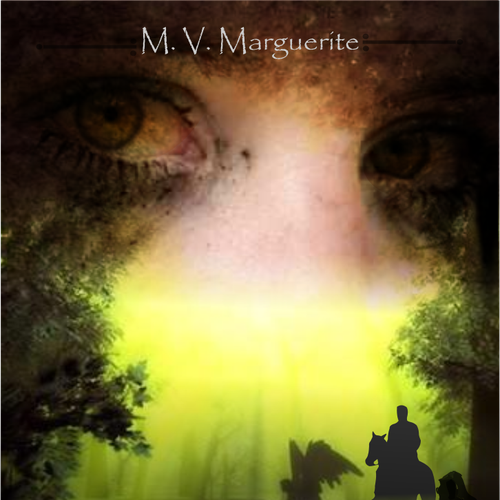 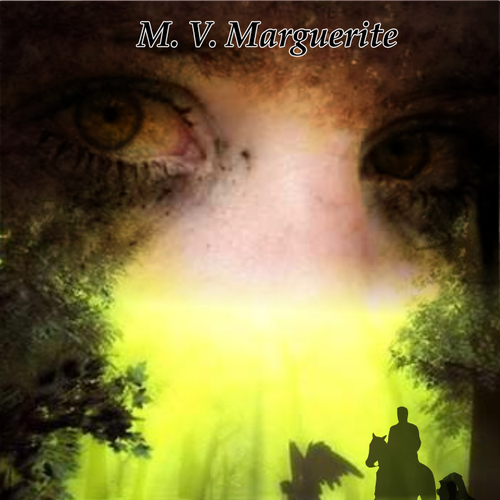 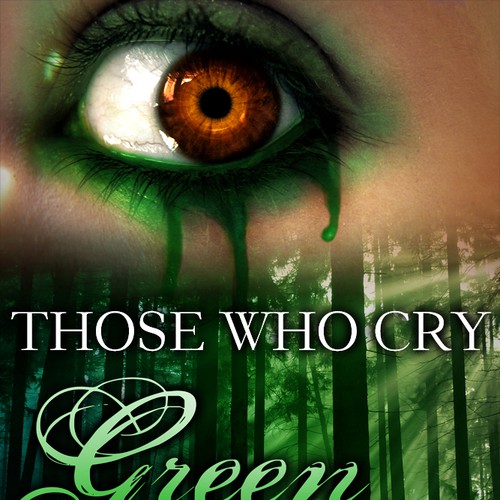 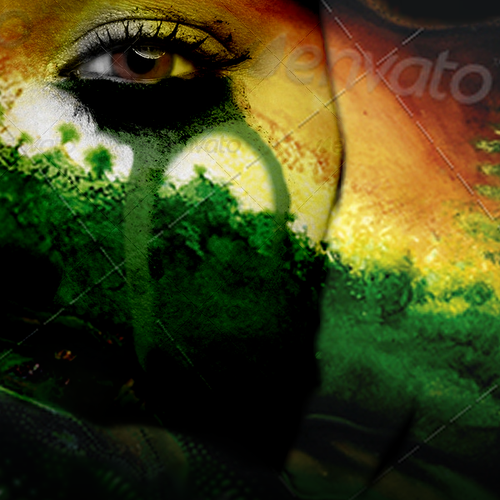 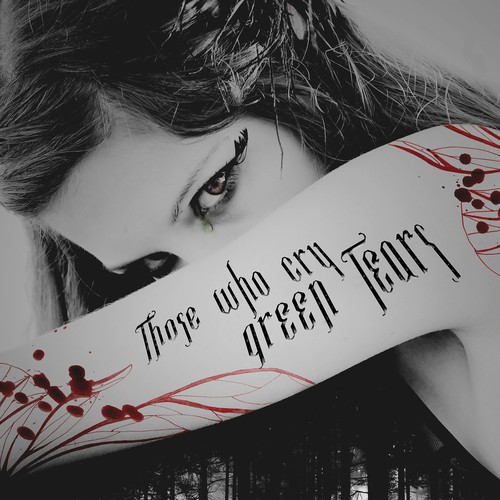 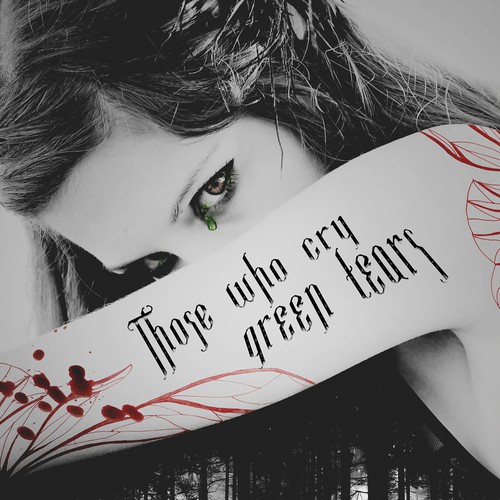 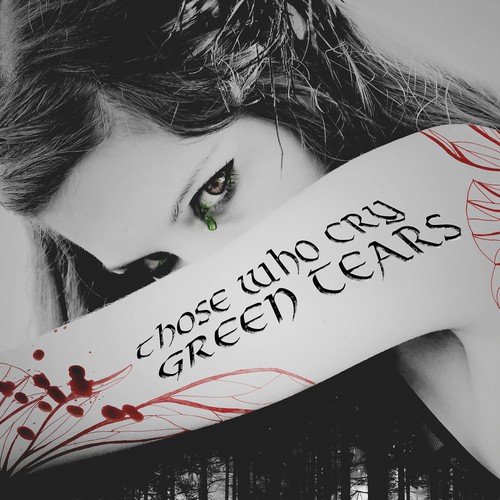 This eBook is a YA adventure/romance. Know your audience!

The eBook you are designing a cover for is titled "Those Who Cry Green Tears" and the Author is "M. V. Marguerite." Protagonist is 17-year old Auria Isadele. The story takes place is in a world similar to J. R. R. Tolkien's Middle Earth, with forests and mountains and lakes and such. Auria lives in a large town called Stonington, which is slowly falling into ruin, but soon strange things start to happen. The town is attacked by mysterious, black, slimy creatures that show a certain taste for human flesh (Auria later learns to call them “Morkis”). Many are killed, some are eaten, but few are captured. Among the captured are Auria's mother, father, and brother, and David Adam (her classmate)’s parents. Not knowing who these monsters are or what they want, Auria and her classmate David are unwillingly thrown into a a violent and dangerous mission to get their families back, possibly alive. Along the way, they discover that they were chosen to become what are called "Abyses" (in their language means "those who cry green tears") two beings bestowed with the power to control the earth (fire, water, air, earth) chosen by Mother Nature to protect the planet in times of need. They do not want these powers or the devastating responsibility that comes with it, but sadly, that is not their decision to make.
Okay, now that you know the background, we can start on ideas about the cover. I do not have a specific requirement. I am totally open to new ideas and designs! The whole story is set mainly in different forests, but towards the end also in a hilly-land and a stormy mountain range. Auria, main character, is tall and fair, with long brown hair, brown eyes, and an athletic build. She is incredibly stubborn and has a rough secret in her past, which she resolved by detaching herself from any kind of social contact. David, secondary character, is taller, athletic, innocently attractive, with a different shade of brown hair, and hazel eyes. But I do not want a full-on resolution picture of either of them. I would rather have a close up of the eyes with translucent green tears or a dark silhouette if you wish to incorporate them (also, any people in the cover should convey a sense of fear or being frightened). Some other details: early on in the story, strange red tattoos form along their right arms, sprouting from the corner of their wrists like long red swirls, or blood stains. This is a mark of the Abyses. If they put their arms close, the designs on their skins match perfectly, as if the same blood stained them at the same time. Also some scenes that may inspire: at the end of the novel, Auria discovers the entrance to underground tunnels that may uncover the truth of the Morkis and how they work, and even earlier then the tunnels, there is a scene where Auria sits at the top of a tree and turns the sun’s ray green for a couple of seconds.
Other things: at one point Auria and David and another man named Auden ride horses across hills to the mountain range. Auria rides a very tall horse, similar to a flee bitten grey, but with the spots accumulated closer to the hips and the shoulder and on the bottom portion of the horse’s leg.
The overall view of the book cover should lean towards dark rather then light. Also keep in mind that since this is an eBook, the cover has to absolutely scream for attention!

have fun and be creative!

Want to design a bestselling spy-thriller cover?
159 £
Readers who like Lee Child, Jack Carr, Robert Ludlum, Mark Dawson, James Patterson or Stephen Leather. Most likely r
138
entries
32
Designer
Shallow Water Romance
$ 749
Usually, women between the ages of 18 and 60.
295
entries
78
Designer
Texas photography book for adults and young professionals
399 $
Adults, professionals, ages 20-90
160
entries
36
Designer
Design book cover in Russian
$299
Most of the readers are well educated women 30-50 age old, with interest in self-help, psychology, spirituality and New
34
entries
5
diseñadores
The Culprit
CAD 529
35 plus cat lovers and fans of true story satirical writing.
168
entries
50
diseñadores
design a beautiful, shattered or broken heart cover for my book, Beautifully Broken
299 $
Anyone going through any kind of hardship or struggle. It's a story of hope and never giving up, and never taking for g
156
entries
43
Designer