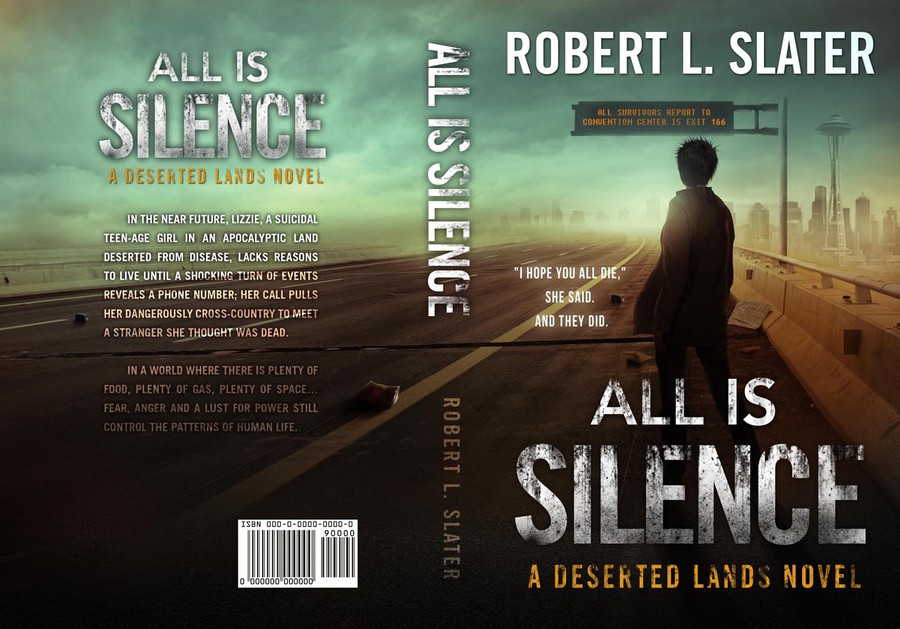 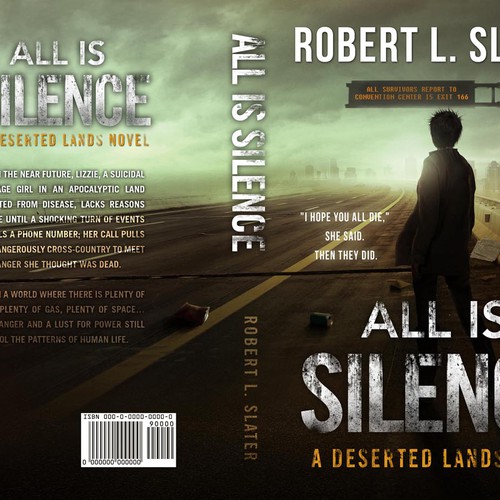 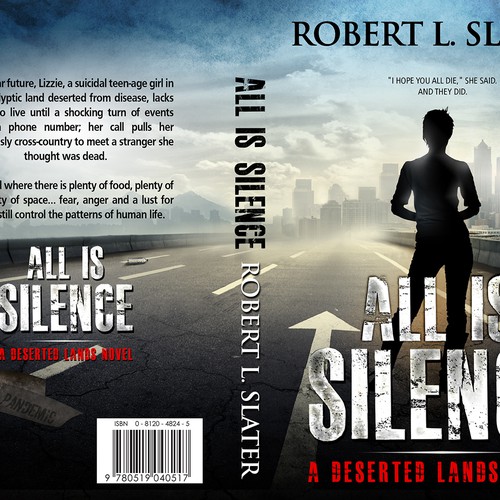 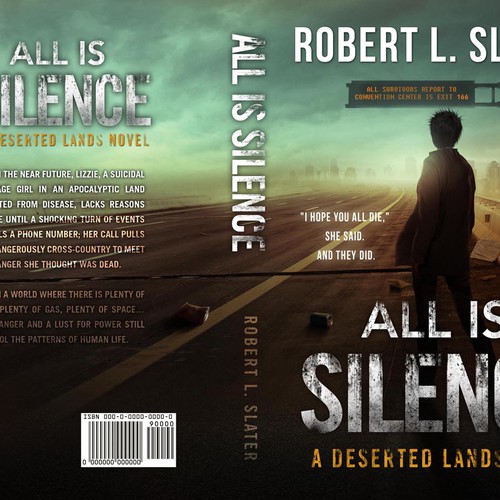 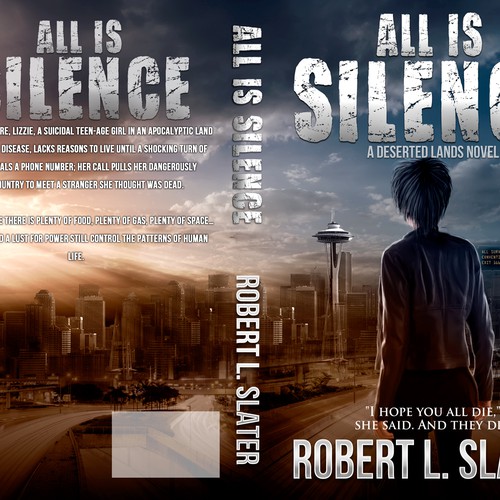 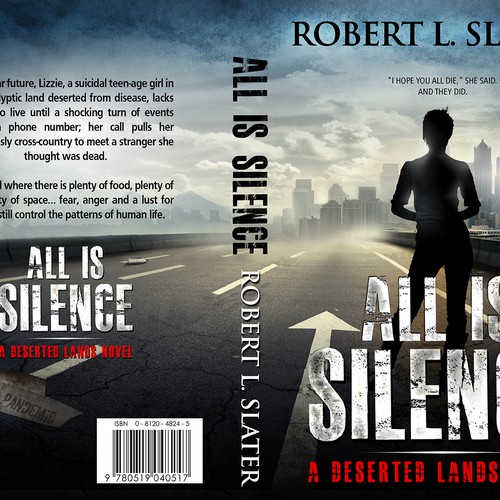 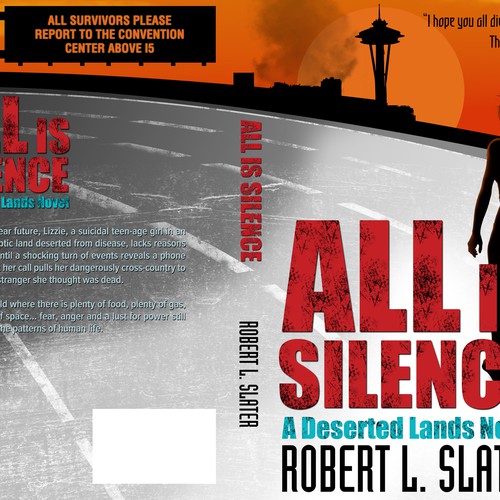 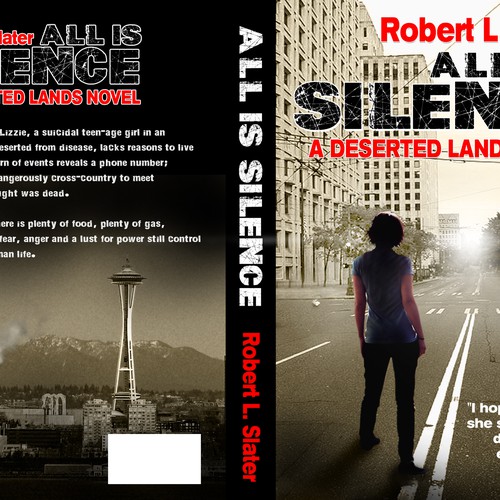 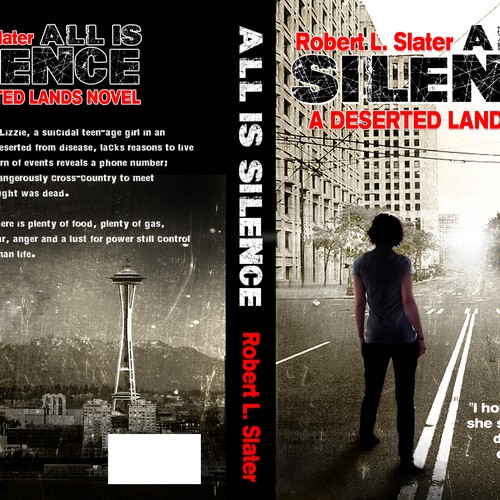 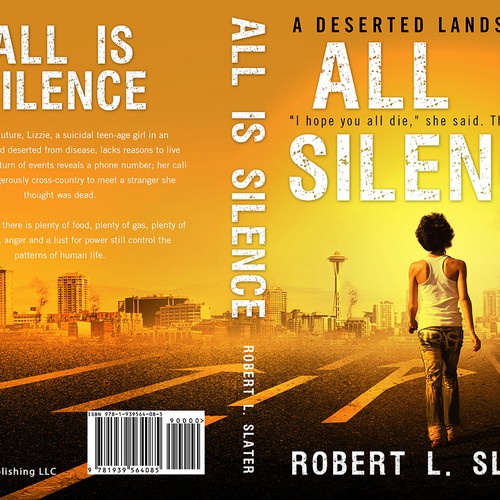 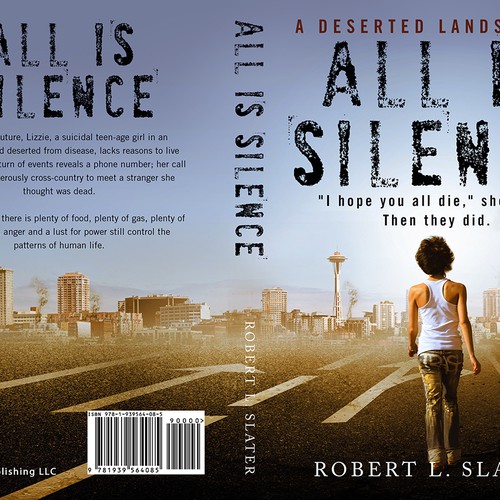 In a future that could be ours, Lizzie, a suicidal teen-age girl, barely navigates her own life. Then everything falls apart. In an apocalyptic land nearly deserted by disease, she lacks reasons to live until a shocking turn of events reveals a phone number. Her call pulls her dangerously cross-country to meet a stranger she thought was dead.

In a world where there is plenty of food, plenty of gas, plenty of space… fear, anger and a lust for power still control the patterns of human life.

We need a design for an Edgy Young Adult novel:

Back Cover blurb: In the near future, Lizzie, a suicidal teen-age girl in an apocalyptic land deserted from disease, lacks reasons to live until a shocking turn of events reveals a phone number; her call pulls her dangerously cross-country to meet a stranger she thought was dead.

In a world where there is plenty of food, plenty of gas, plenty of space… fear, anger and a lust for power still control the patterns of human life.

Potential Cover Tagline: "I hope you all die," she said. Then they did.

Author's cover ideas, but totally open to other visions, or something more symbolic. It MUST appeal to Young Adults and New Adults. It is important the world is not destroyed: no war, no disaster, no aliens, no zombies, but it is empty. There can be fire or smoke in the background as a minimal element; fires are mentioned due to lack of firemen.

1. Space Needle at Sunset with smoke in the background. I'd like to avoid using specific faces. Maybe include Lizzie, the protagonist, in silhouette. She is described as a 17 year old of Irish/Mexican decent, a short, shapely tomboy with spiky hair. Kind of punk/grunge.

2. Pike Place Market (or other Interstate 5) Pacific Northwest locale with no people in the color photo and black and white photo with people in it showing through the text.

3. From the text: “Liz looked up from her reverie. There was a message on the giant safety sign. ‘ALL SURVIVORS PLEASE REPORT TO THE CONVENTION CENTER ABOVE I5’”

4, Or Zoo animals crossing Interstate 5 in Seattle or Tacoma. (Please use actual animals that are in the Woodland Park or Pt. Defiance zoos.) From the text: “Lizzie followed his gaze. A couple of tigers, their bodies the size of small horses, padded patiently across the freeway. The approach of the SUV and its skidding stop had not bothered them at all.”

Optimally this cover is for the E-book cover as well as the print cover. So looking good as a thumbnail is necessary.

Don't limit yourselves to the ideas listed here. Author is very open to other ideas and is extremely collaborative. This is the first book in a series and may lead to additional covers.

Some covers I like from other edgy Young Adult novels.

Below are a bookmark and a very early cover mock-up.

Comienza ahora
Romance Writer needs first cover in a series. Series will be SIX books total.
CA$399
New Adult Romance author - romance readers - women 21-60...
97
entries
25
designers
Design a cover for children's adventure short read
£209
We are an indie publsihing company creating childrens fiction....
38
entries
9
designers
Create a Fun Book Cover based on Mock-up, for readers aged 9-12
US$ 499
Daniel's First Stand is a fictional account of a boy who opens his first lemonade stand. Aimed at kids 8-12 years old...
60
entries
9
designers
What would make you read this important book?
US$ 299
I am an author of young adult and middle grade fiction. Many of the books I write have justice oriented themes. The c...
87
entries
31
designers
Book Cover Design For First Book In Series - Fun Chick Lit/Romance
US$299
Galahads Press is a self-publishing company. We are focused on writing fiction in the chick lit genre with a focus o...
50
entries
13
designers
Take us to new heights by designing a book cover first of 3 titles
US$ 499
Provide digital promotion to individuals and organizations seeking to share cooperation via the masters of messages....
169
entries
18
designers
Más información sobre diseño de portada de libro o revista
Vea como funciona