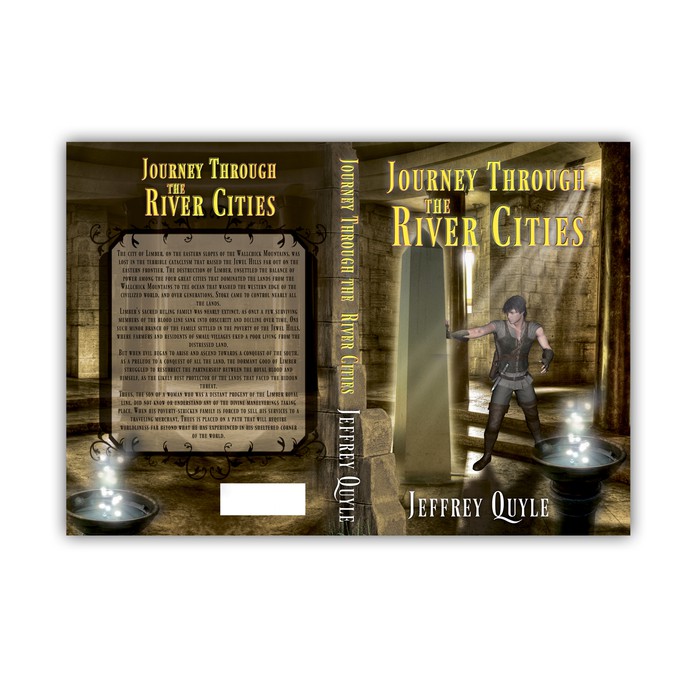 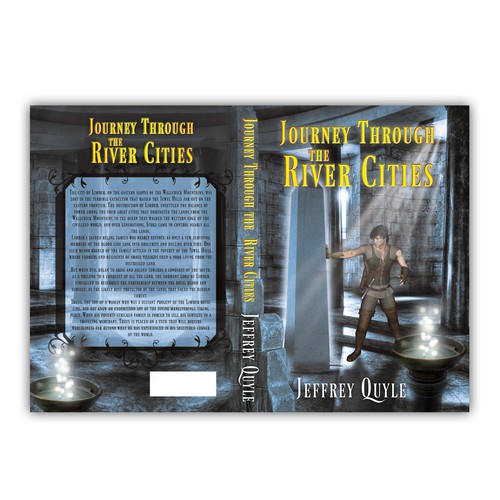 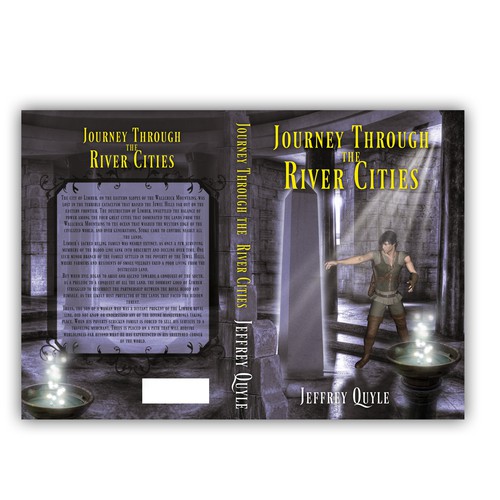 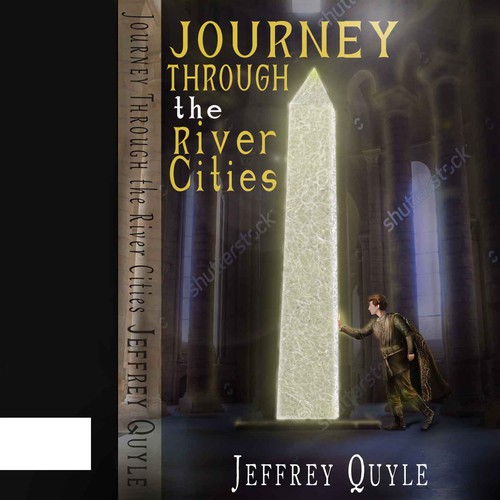 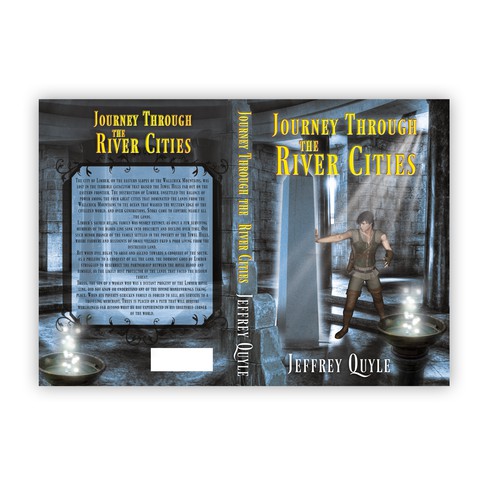 Journey Through the River Cities

Target audience is young adult to adult (ages 14 and up)

I would like to have a book cover that will be 9" tall and 13" wide, covering the front, back, and spine of the book, with a 3/8" bleed. It should provide approximately a one inch vertical stripe in the center for the spine title of the book, and a white rectangle (2" wide by 0.75" high) in the lower right corner of the back cover for the bar code. It should provide space for a text description of the story to be written on the back cover.
On the front of the book will be a scene showing a teenage boy, around 17 years old. He’ll be in an open space set inside an empty ruin of a stone temple. The scene will be set in an open square that is set a couple of steps below the surrounding walls, which will be lined with columns.

The central portion of the scene where the boy will be standing will be approximately twenty feet square, with a stone railing enclosing in at approximately waist height. All the stone in the scene – the columns, the railing, the floor – will shows signs of age and decay.

The boy will be standing upright leaning slightly forward, with an extended arm and one hand pressed against a pale marble obelisk, which will be approximately 10 to 12 feet tall, tapering towards a pointed top, similar to the Washington Monument in Washington, DC, USA. The marble will have some black veins running through it.
The interior of the temple will be illuminated by a few shafts of light descending from skylights above. The obelisk will be glowing, and the boy will be lit by the light of the obelisk.

The setting is in a medieval era in terms of clothing, weapons, technology, etc. The boy will have a sword or knife on his belt.

Below is a photo model of the hero, and three examples of previous book covers that I've had designed on 99designs that I particularly like.

Catchy book cover for children’s middle grade fiction.
$ 199
Children, ages 8-12.
3
entries
2
Designer
Paperback/ebook cover for fiction, counterterrorism thriller
US$399
Fiction, thriller readers in the genre of Vince Flynn, Brad Meltzer, etc. Middle age males in the United States. I have
105
entries
31
diseñadores
Helping people make fitness a priority
299 $US
This book would be good for anyone who is wanting to Make Fitness A Priority in their lives, or wanting to start making
282
entries
31
designer graphistes
Piano Mastery Series Opening Book To Spearhead New Company
£ 419
Piano adult beginners, people who are either completely new to Piano, or who gave up due to boredom and are looking to g
204
entries
36
Designer
Black Jane Austen
US$ 199
African American Women Women Jane Austen Lovers
24
entries
12
designers
Modern art nouveau-style fantasy cover for printed book. Ebook cover project to follow.
£ 319
Primarily for adults, but younger readers would enjoy it too. A general audience that likes epic fantasy with psychologi
8
entries
2
designers