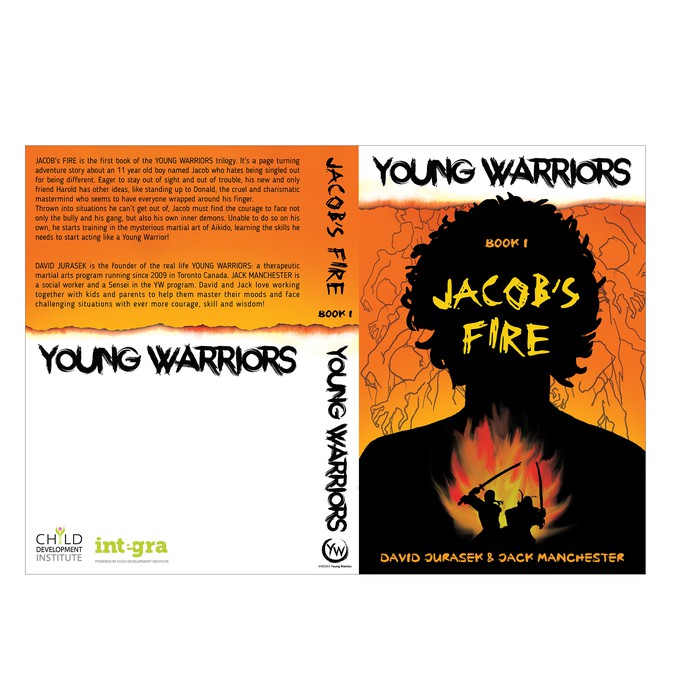 Looking for a striking book cover for a real-life inspired martial arts adventure for tweens! 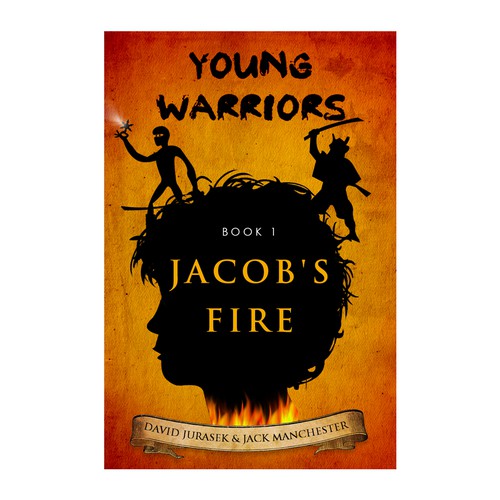 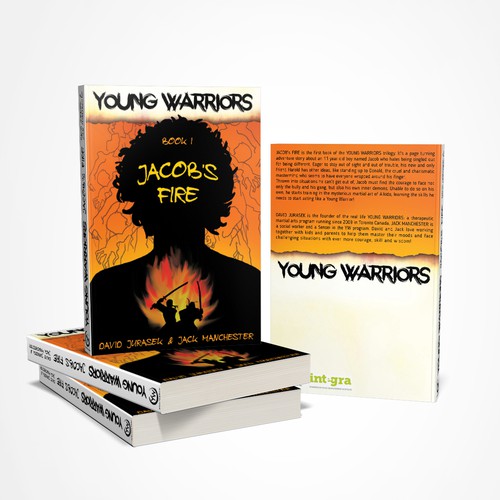 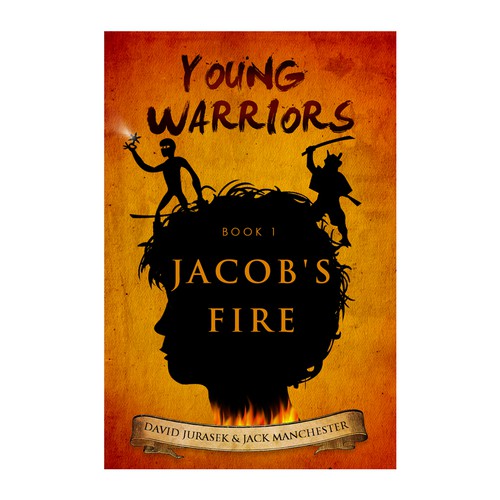 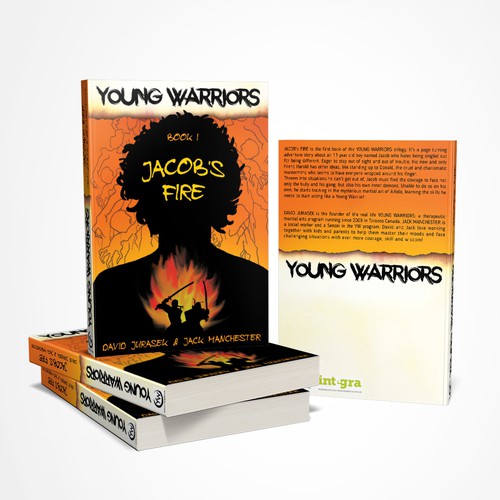 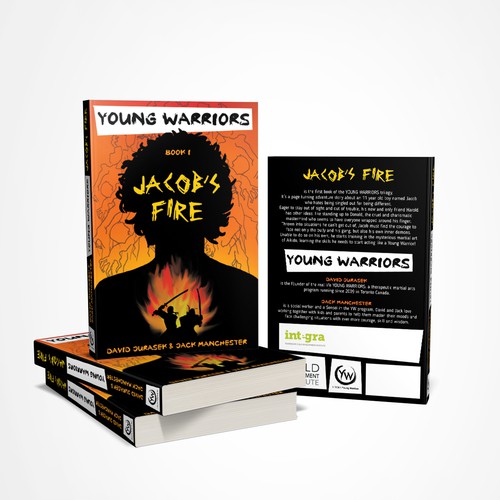 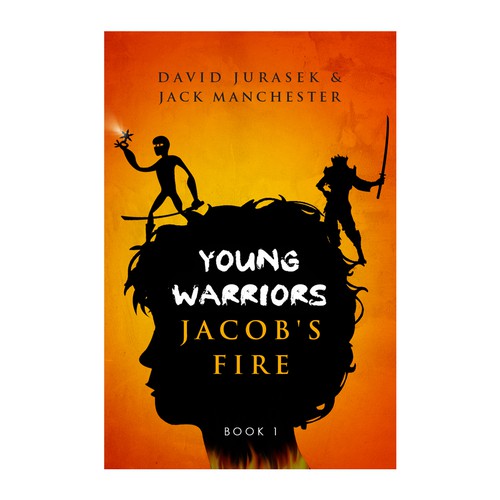 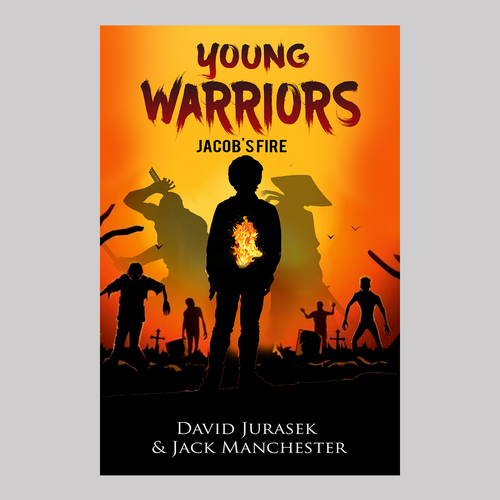 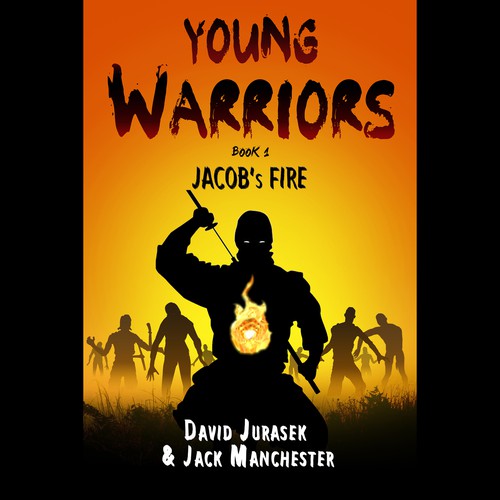 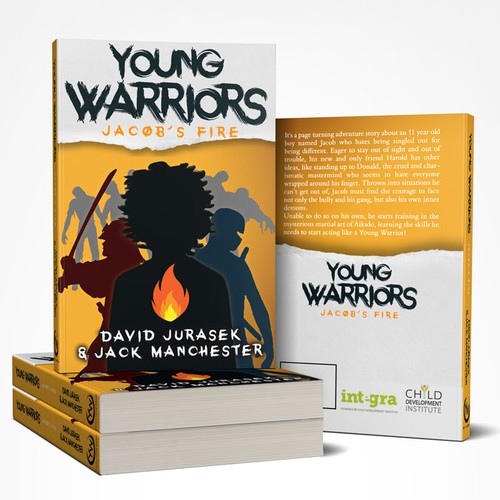 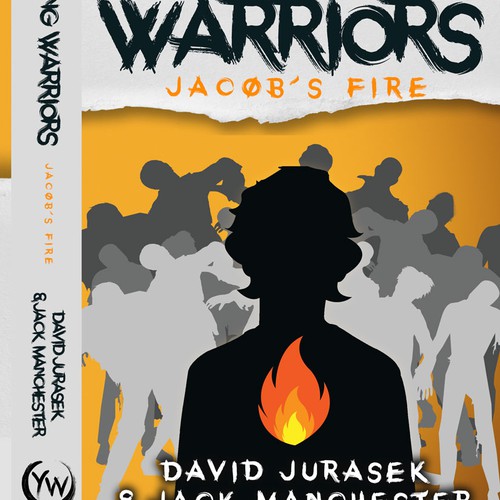 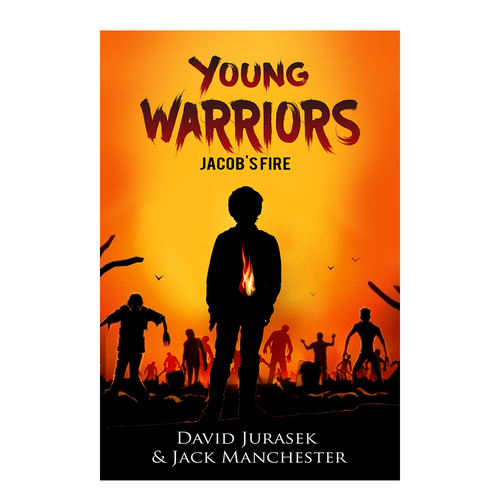 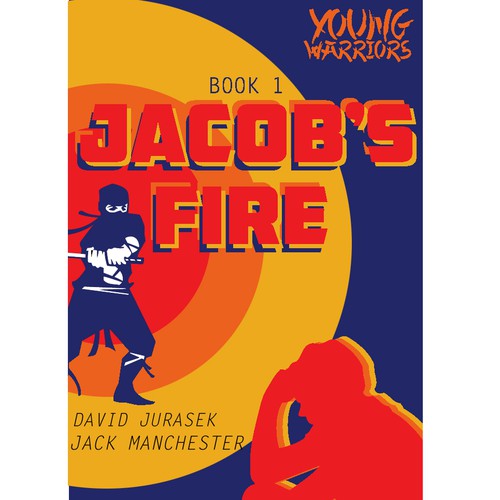 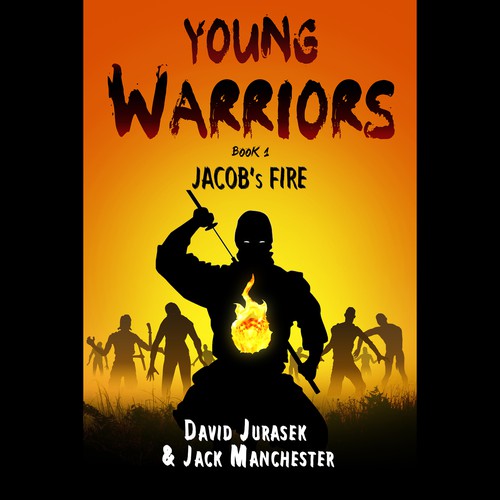 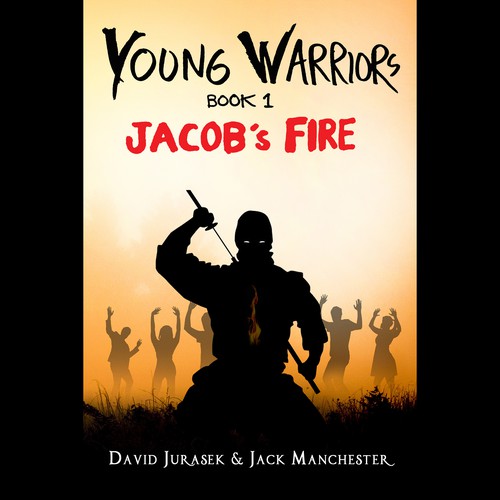 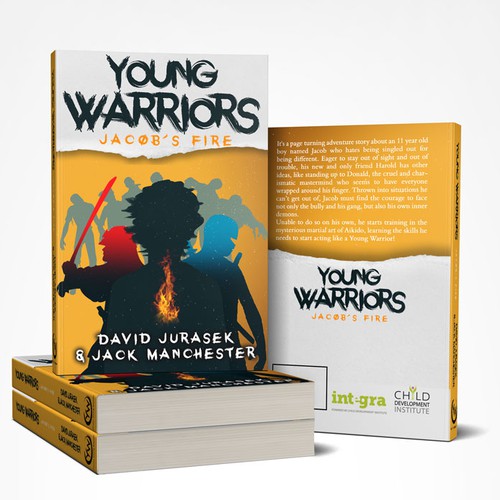 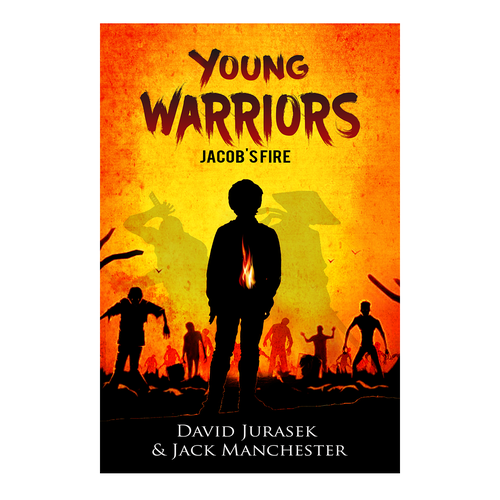 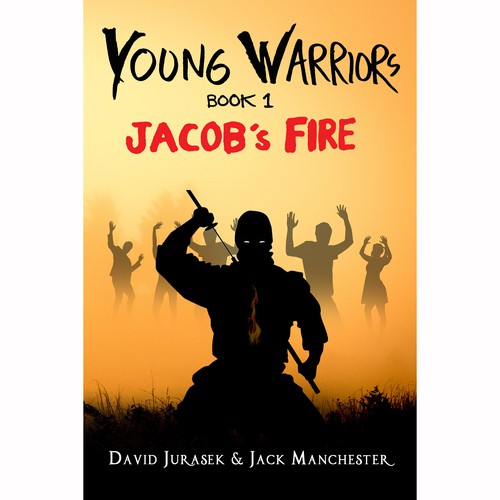 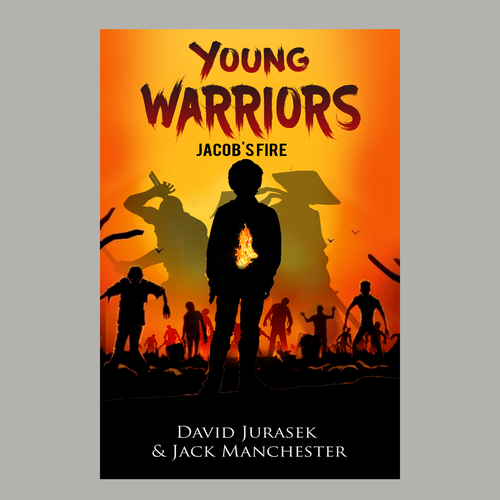 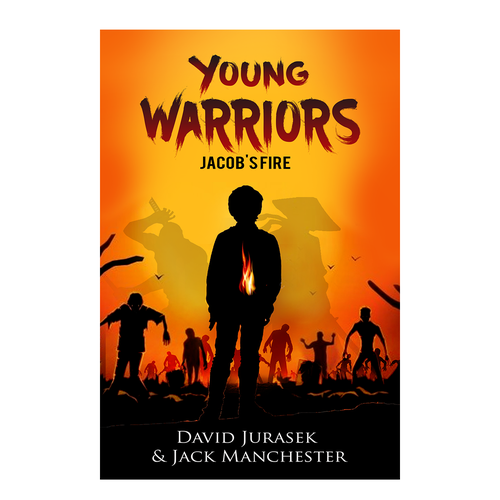 DAVID JURASEK is the founder of the real life YOUNG WARRIORS: a therapeutic martial arts program running since 2009 in Toronto Canada. JACK MANCHESTER is a social worker and a Sensei in the YW program. David and Jack love working together with kids and parents to help them master their moods and face challenging situations with ever more courage, skill and wisdom!

Note: at this time, we don't need photos of us on the back. May change our minds so good to have the psd file to move elements on back cover around and do that ourselves.

JACOB's FIRE is the first book of the YOUNG WARRIORS trilogy.
It's a page turning adventure story about an 11 year old boy named Jacob who hates being singled out for being different. Eager to stay out of sight and out of trouble, his new and only friend Harold has other ideas, like standing up to Donald, the cruel and charismatic mastermind who seems to have everyone wrapped around his finger. Thrown into situations he can’t get out of, Jacob must find the courage to face not only the bully and his gang, but also his own inner demons.
Unable to do so on his own, he starts training in the mysterious martial art of Aikido, learning the skills he needs to start acting like a Young Warrior!

The book cover needs to appeal to tweens (mostly boys) who are: different, into adventure stories yet also wanting to read about characters like them in the real world struggling with school, bullying, not fitting in, being sensitive and different. Also will attract tweens into anime/comics, who are martial arts curious, into samurais and ninjas, and zombies.

We are planning to do Createspace and Ingram Spark in tandem. If needing to focus on specs, PLEASE work towards Createspace. AND also provide Photoshop version (PSD - with layers) so we can adjust parameters, and update details and move the barcode box, etc as needed.

Simplicity of colour, lines and symbolism.
Love the clean silhouette and symbolic yet realistic nature of this.
Love how stark and simple it is.

BACKGROUND: The story and feel of the book is a mix of slow, deeply affecting, complex real life scenes with nuanced characters punctuated by intensely dramatic martial arts training and fantasy (inner world of main character). Jacob draws a lot and imagines or dreams about himself as a lone boy ninja often on the run, with a Red Samurai and his army as his nemesis (bully in the story), his only friend Harold the gutsy nerd as a ronin (lone samurai without a clan) and hordes of zombies at their heels trying to eat their brains!

The book is meant to be a read by both parents and kids who're different, affected by bullying, ADHD, learning disabilities, and just paralyzed by anxiety. The cover needs to appeal to the boy tween, however. In a stark and captivating way, like the program it is based on. (http://www.youngwarriors.com)

The YW symbol (see attached) should help in choosing or creating the hand written brush font for YOUNG WARRIORS. We see this as black on white or white on black. We're torn about the background being stark white or black or orange (sunrise, sunset, fire). Maybe white like the pages he draws on.
The theme of finding courage is the strongest emotional element and expressed through also tapping into his anger... both of which speak to the FIRE motif in the title JACOB's FIRE.

One possibility I see vividly is a white background with the silhoutte of Jacob (wild wavy haired dreamer) in the center (or centre bottom) of the cover, drawing, or brooding in fear/contemplation. A silhouette of the red Samurai Lord with sword raised to cut him up on the right (part off page) and a black silhoute of the ninja boy hanging off a bamboo tree top watching and hiding on the left... The fire theme... could be a small burning fire inside his belly/chest area or all of his silhouette... The sparks of courage come from within.

I don't see the images as too realistic but also not too kid-like... realistic detailed silhouttes or something else striking and vivid (like his drawings). Also the style is in line with being a tween -- twix inbetween childhood innocence and playfulness and brutalities of teen and adulthood.

As one of the authors and lead on the final decisions, I am super excited and nervous to see whether you can create something bold and striking yet also capturing the feel of the heart of our quiet introverted reluctant hero... If you can make it appealing to tweens but also clean and stark and true to an Aikido (considered the peaceful martial art) aesthetic that would be awesome! But, in the end, I will let go of it being accurate and take more that it is evocative and connects to sensitive boys this age.

* Too busy or too layere... too many things distracting from the central themes and story arcs: a journey from loneliness, shame and cowardice to standing with courage, ready to get taken down, but standing together.

A visual jam on the themes and visual aspects of the book.
The top part is our logo for the YOUNG WARRIORS program which we want you to use in some way and base the Young Warriors brush text on.
Our program logo -- which we will use on the back bottom as our publishing house.
A drawing sketch by a 10 year old who loves the book and is sketching the drawings our main character would be making.
Love the red samurai (perhaps to use on cover or not) and simplicity of it on white here.
Love this series of books though they are for Young Adult more and so the cover is more realistic photo... but love the silhouetting
Love the simplicity of this yet the pic is too rudimentary drawing for us
Love the silhoutte simplicity yet detail here evoking a feeling... we're going for a different feeling (orange fire, boy, brooding, etc).
How our marketing looks when we did it ourselves to woo parents and kids to get preview chapters.
Love the evocative silhouette here again.
Love the golden, orange warmth and courage and friendship aspects along with the realistic silhouettes.
Another example of a great colour AND silhouette being realistic, evocative and simple. Jacob in the story has this wild wavy kinda hair too.
Love the simple stark silhouette here too.
This is our company's main logo which we also have to fit on the back cover bottom next to the Integra one.
A quick sketch I just made to offer one option... in terms of layout.
Another quick sketch I made to show the layout I would prefer... Boy ninja needs to be scared, frozen, out of place, hoping not to get eaten...
And Aikido sketch made by someone off the web. To give you a feel for the peaceful martial art movements.
This is Jack (co-author) working with a boy in our program who has cool curly hair and is really great at being a Young Warrior
A pic of our boys in the program learning a skill of FOCUSING their minds using a sword strike motion with their hands. The boy most in foreground has the kind of wild wavy hair our hero Jacob has.