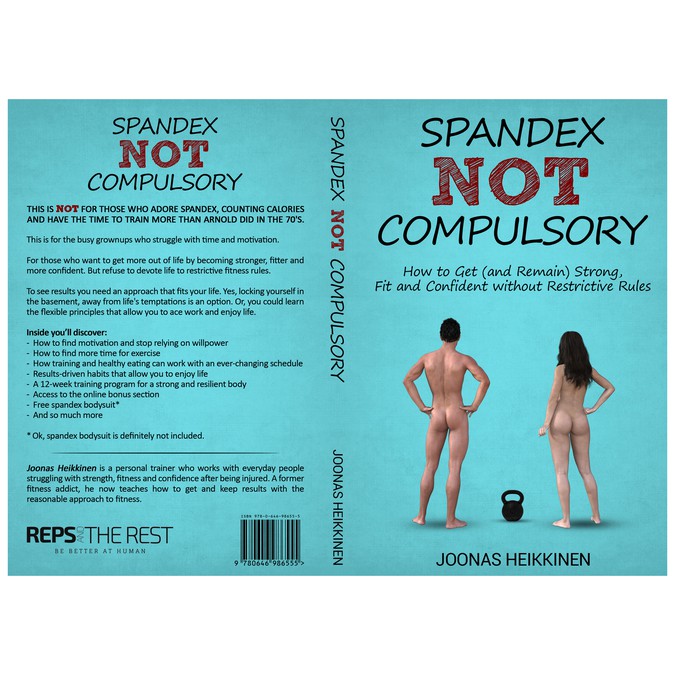 A minimalist, captivating health and fitness book cover that makes you go "WTF is this?" 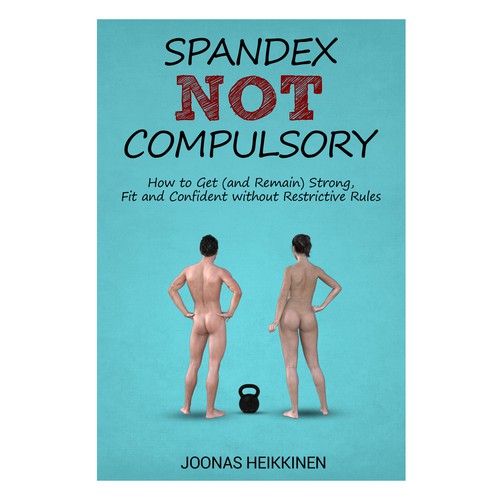 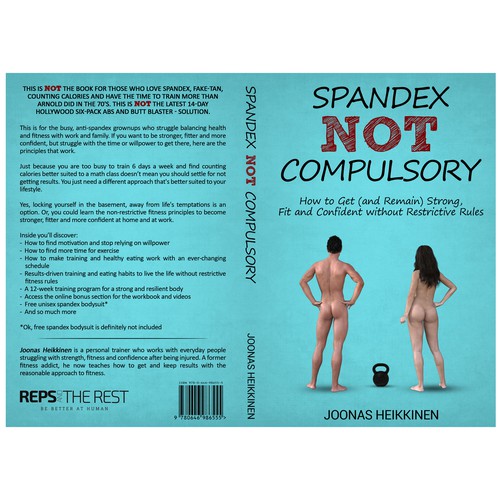 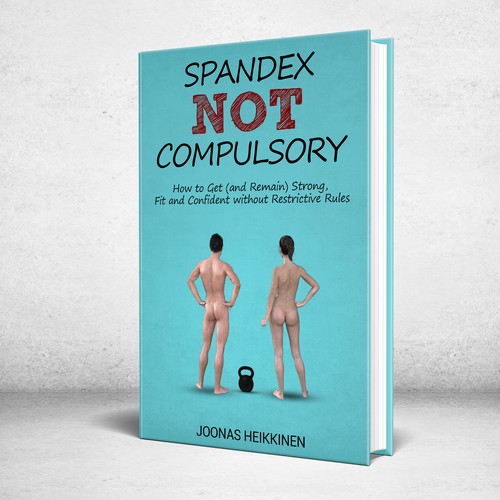 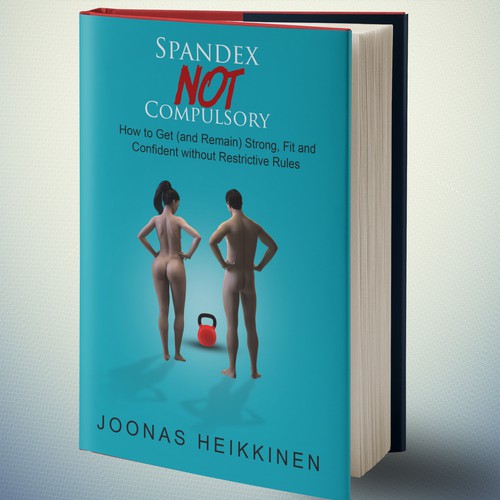 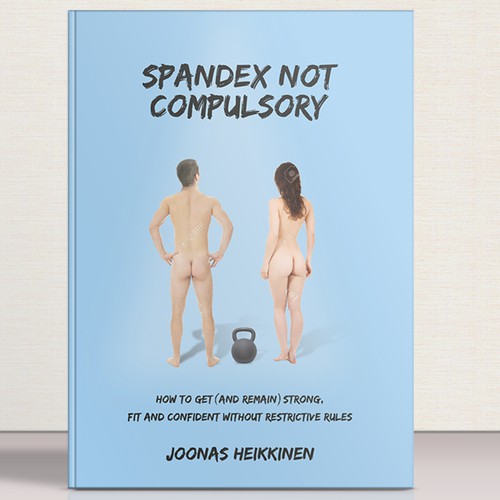 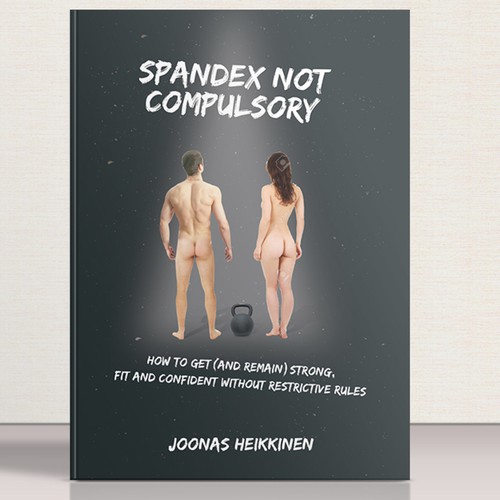 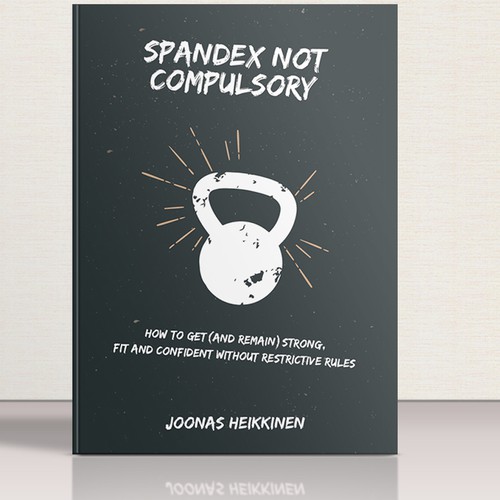 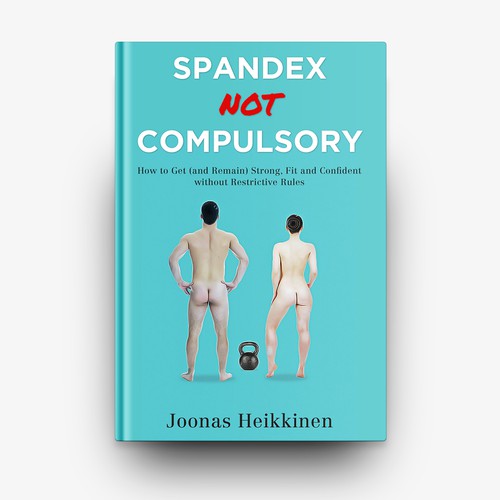 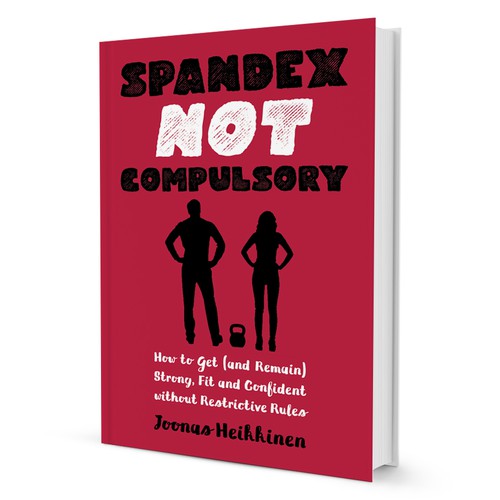 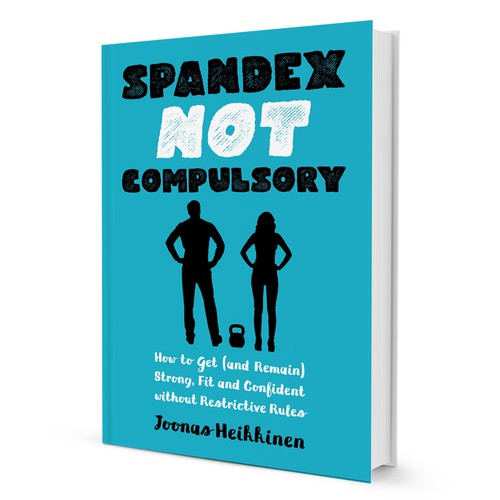 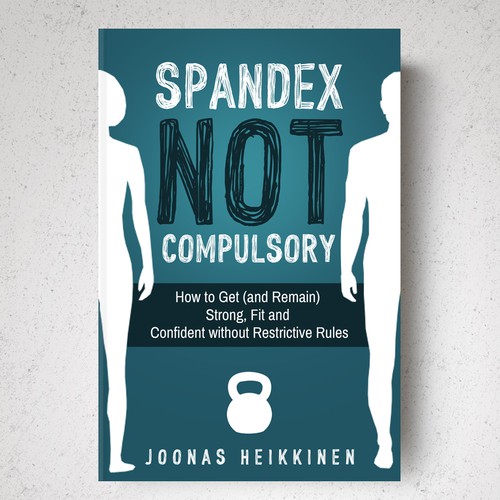 Spandex Not Compulsory - How to Get (and Remain) Strong, Fit and Confident without Restrictive Rules

Joonas Heikkinen is a personal trainer who works with everyday people struggling with strength, fitness and confidence after being injured. A former fitness addict, he now teaches how to get results with the reasonable approach to fitness. RepsAndTheRest.com

If you love spandex, fake tan, counting calories and have the time to train five days a week, this is not the book for you.

For the busy, anti-spandex grownups who struggle balancing health and fitness with work and family, here are the reasonable fitness principles that work. If you want to be stronger, fitter and more confident, but struggle with the time or willpower to get there, this is your book.

Just because you are too busy to train five days a week and find counting calories better suited to a math class doesn’t mean you should settle for not getting results. You just need a different approach to reach your health and fitness goals.

Yes, locking yourself in the basement, away from life's temptations is an option. Or, you could learn the reasonable, non-restrictive fitness principles and be stronger, fitter and more confident at home and at work.

- A busy male or female between 35-55
- Works in corporate environment, does better than average financially, but not excessively rich. Has spare income to hire a trainer.
- Knows how important exercise and a healthy lifestyle is, but struggles making the commitment due to work and family. Has tried and failed before
- Not an obese or more than 5-8 kilograms overweight, just unhealthy in other ways
- Finds a typical Instagram fitness personality somewhat repulsive
- Down to earth personality, doesn't get easily offended. A positive person who enjoys a laugh and having a good time
- Hates extreme approaches to health and fitness and has tried them before
- Lives within 25km of a big metropolitan city (Sydney, or similar)

IngramSpark and CreateSpace, will also sell a Kindle version.

UPDATE MON 16.4.
- Don't make the title heavy and bulky.
- The few design that I've seen I don't like when the text is in cursive fonts
- The man and woman in the cover, can you turn them both in about 30 degrees. Make them both naked. No shoes either. Can we try making them more visible, like in the Randomistas example. It's ok to see butt cheeks.
- Note on the female figure: the thighs can be a bit thicker. See how they look in the examples I've provided. Know what a "thigh gap" is? Where women post pictures how thin their thighs are. I don't like it because it's not what a most women look like.

A simple, eye catching cover that appeals to a person who values their health, but struggles committing. When people see it I want them to go "WTF is that?" They can't resist picking it off the shelf in a book store. The book is actionable but not super-serious so the cover shouldn't be super-serious either. But it shouldn't just be a joke.

My rough idea is to have SPANDEX COMPULSORY written and then NOT written in between with magic marker (red?). Whether the title and marker are capital letters or not, it's up to you to make it work. Then perhaps the Subtitle under it somewhere as it's a crucial description of what the book is about.

I like the Randomistas cover (see attached). To twist it: Having a man and a woman standing with a kettlebell between them (see attachment for the kettlebell shape). Both man and woman have hands on their hips, they are naked and seen from behind, but far enough from a distance so you can't see too much muscle definition. I don't want them to be looking like fitness models or body builders, but normal people who look like they lift weights few days a week, walk outdoors and care about their health. I've attached examples for both male and female bodies. The attached kettlebell is a sample only as I just got it from Google. But I like that shape.

Print size is 6x9 inches, the typesetting and formatting will be done after the cover design and that will determine the spine width. I will have the whole book and covers proofread after so having the option to edit the text later would be great, if at all possible.

- Not a typical fitness book cover: no muscles, abs, scales, tape measures, food, or anyone lifting a weight.
- No actual pictures of people, illustrations only.

Comienza ahora
Helping people make fitness a priority
299 US$
This book would be good for anyone who is wanting to Make Fitness A Priority in their lives, or wanting to start making
282
entries
31
designers
Modern art nouveau-style fantasy cover for printed book. Ebook cover project to follow.
319 £
Primarily for adults, but younger readers would enjoy it too. A general audience that likes epic fantasy with psychologi
8
entries
2
designers
Business book cover needed, themed around phenix and unicorn.
$499
Young passionate enterpreneurs both male and female, aged between 18 - 40. Keen to build their own businesses. Target ge
161
entries
42
デザイナー数
Design a dark and foreboding Crime Thriller Cover
239 £
Those interested in mystery thrillers and crime novels. Mostly adult audience
77
entries
25
designers
Book cover for non-fiction
199 US$
162
entries
14
diseñadores
The Garden of Shadows and Bones
MX$ 10.099
My books are geared towards New Adult. They are mainly about dark fantasy with witches and magic.
62
entries
24
designers
Más información sobre diseño de portada de libro o revista
Vea como funciona