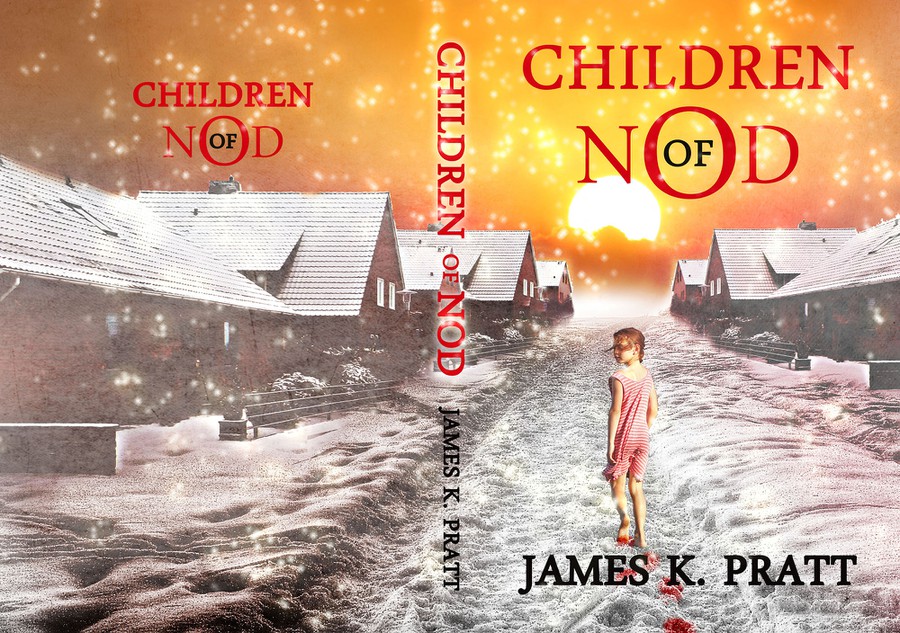 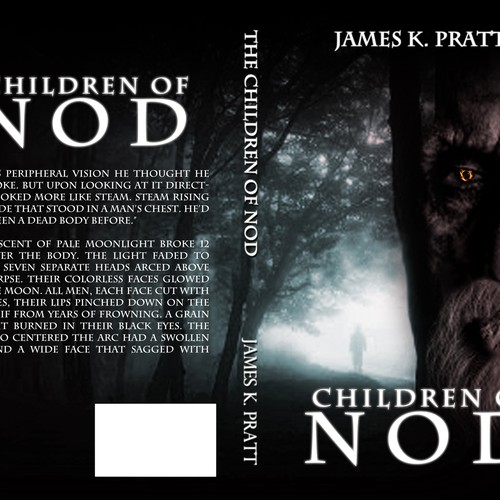 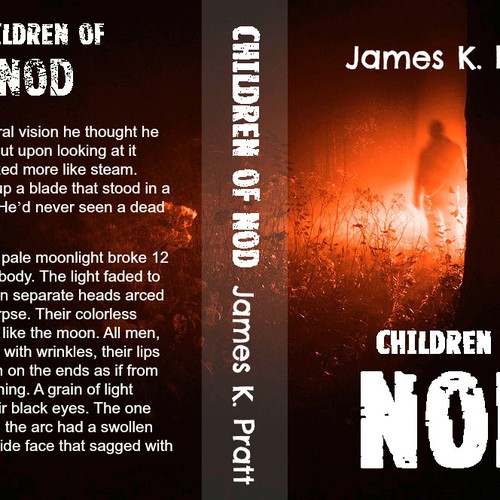 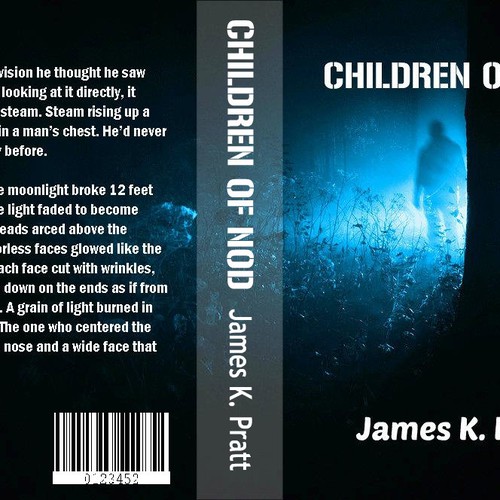 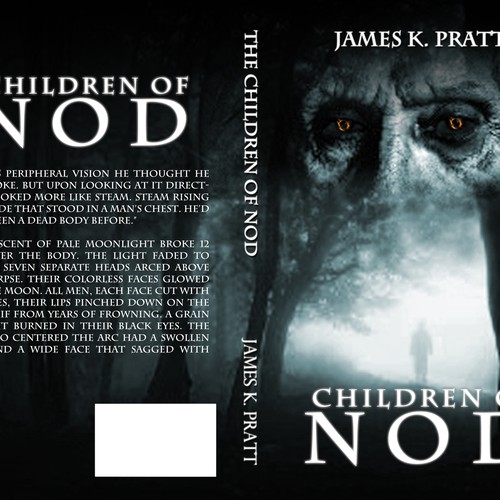 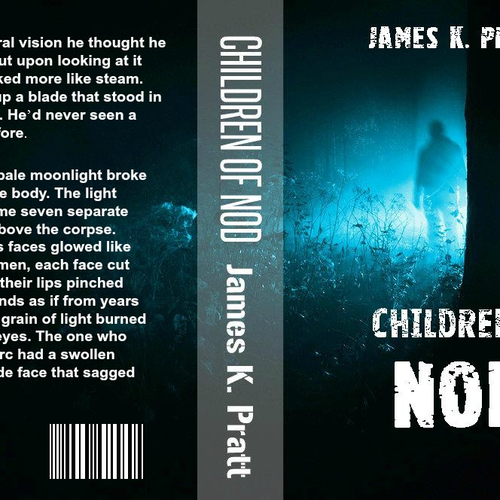 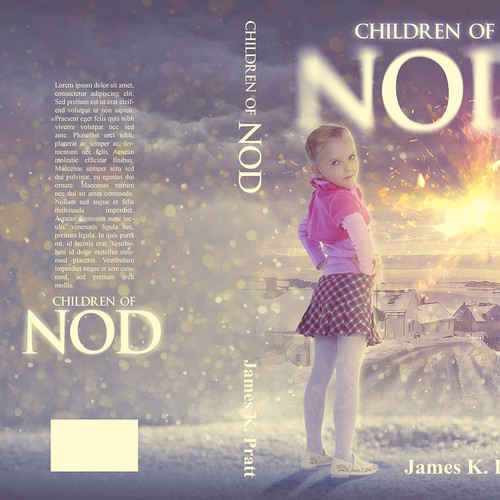 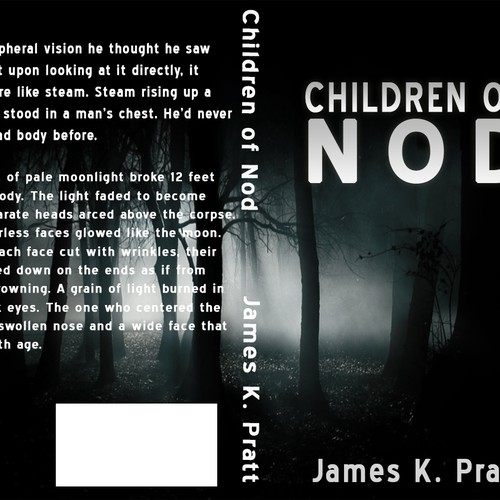 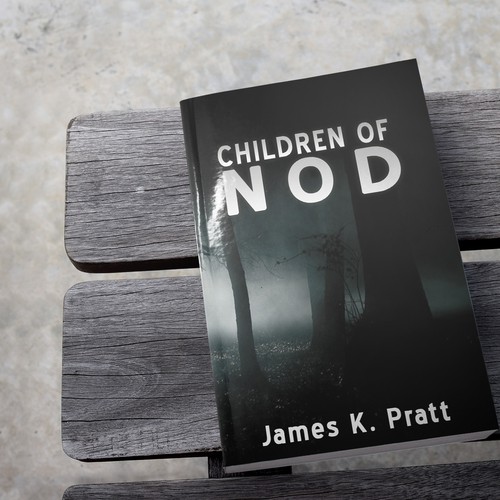 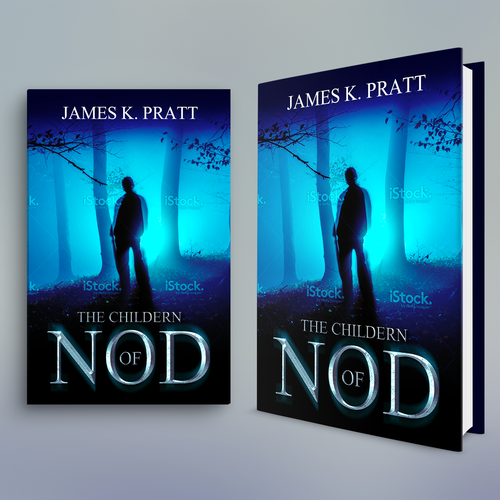 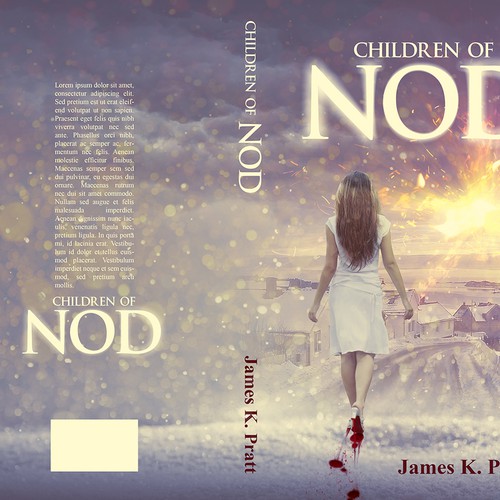 I need a cover for a modern dark fantasy story. I list several possible covers below. Choose which one you think you can do best. With each possible cover I give excerpts of the story or details.

This will be for Ebook and print.

This scene takes place in a forest (not in the Bend see Cover #2). Though in the story it happens during the early morning it would be fine to have the cover appear as night.

“In his peripheral vision he thought he saw smoke. But upon looking at it directly, it looked more like steam. Steam rising up a blade that stood in a man’s chest. He’d never seen a dead body before.”
(…Later, over the body)
“A crescent of pale moonlight broke 12 feet over the body. The light faded to become seven separate heads arced above the corpse. Their colorless faces glowed like the moon. All men, each face cut with wrinkles, their lips pinched down on the ends as if from years of frowning. A grain of light burned in their black eyes. The one who centered the arc had a swollen nose and a wide face that sagged with age.”
…
“But then one looked to Russell from the corner of its narrow eyes. It had an owlish face with a beakish nose and hair combed back. The demons voice wasn’t raspy but instead sounded rather bored….”

The Bend is a Dante- esque Time/Place. In this story it takes place in a small town but normal humans do not know its there. In takes places when time stops. The Bend happens place during night and evening.

One possible cover is having the cover with a girl (about 12) leaving a trail of bloody footprints in snow. You might have her in the distance and looking back. To either side there are houses. She in the middle of a snow covered road. (Read about “snow” below.)
Having her walking to the sun set might be nice too. (But if the details give you idea go with it. But you might ask me before getting started)

Some additional information.
No shadows exist in the Bend even during the night.
Some houses burn in the Bend. While other seem to be left alone.
Sometimes “snow” falls in the bend. This “snow” is hot and glows in its center. It does not fall from clouds but at one point the POV character thinks to himself that it falls from the stars. Once the snow hits the ground it loses its glow and looks like normal snow.
People sometimes burn in the bend.
The Bend has walking shadows. One stretches out his arms and screams in the air. (These walking shadows are people.)

Sorry the story sounds so weird. I tried to keep it simple.

The file I just add is for the first cover. It shows how the demons
are spaced out in context to the body.

Comienza ahora
Business book cover needed, themed around phenix and unicorn.
US$499
Young passionate enterpreneurs both male and female, aged between 18 - 40. Keen to build their own businesses. Target ge
161
entries
42
diseñadores
Creative Book Cover for a Female Dating and Relationships Title
US$199
Women reading this book are usually younger and they’ve just been through a breakup. They don’t know how to collect the
150
entries
24
diseñadores
Book cover for non-fiction
$ 199
156
entries
13
Designer
paper back and ebook cover
£ 319
Someone is reading this book to learn the most effective way to write a to-do list that will keep them motivated and pro
51
entries
20
designers
The Stack Tester Diaries
239 £
Family
38
entries
14
designer
Book cover for a fiction about love, loss, and perseverance. Inspired by a true story
399 US$
Adult fiction romance love and loss mostly female
81
entries
22
diseñadores
Más información sobre diseño de portada de libro o revista
Vea como funciona